Get a cold pint at these craft beer places in KL

Beer is unpretentious. Unlike the rigidity of wine and whisky, all beer wants is for you to enjoy it cold after a long and hard day at work. It might be touted as the alcoholic drink of the masses, but like everything else, there is a fancy, artisanal side to it. Whether you call it small batch or artisanal, they’re all craft beer. And if you have yet to try craft beer in KL, it will change your perception on what beer is supposed to taste like.

Perhaps you frequent those watering holes that sell beer on the cheap. The standard beer brands are usually on tap, flat, and tastes like piss. But you suck it up anyway because that’s what beer is supposed to taste like. Or so you think. Wait till you try craft beer and taste the in-depth flavours of malt, chocolate, citrus, coffee, and more.

For those new to craft beer, it’s easy to feel overwhelmed. There’s a huge variety of styles to pick, with the more common ones you’ll see being the India Pale Ale (IPA),  American IPA,  Blonde Ale, American Pale Ale (APA), Imperial Porter, and Porter. Our tip? Ask one of the friendly people at these craft beer bars for suggestions on which one to get. Depending on whether you’re in the mood for something citrusy and light or creamy and heavy, they’ll point you in the right direction.

Now, let’s get on to the bars. Ales & Lagers once occupied a tiny storeroom in the back doors of Solaris Dutamas. In recent years, they’ve upgraded to share a proper shop lot with printing store TTP.my. By day, you can send documents and images to be printed. By evening, pick up your prints and enjoy a bottle or two of craft beer. They also happen to be one of the first places in KL that stocked imported craft beer. They stock over 60 types of craft beer bottles. There are currently no beers on tap here. 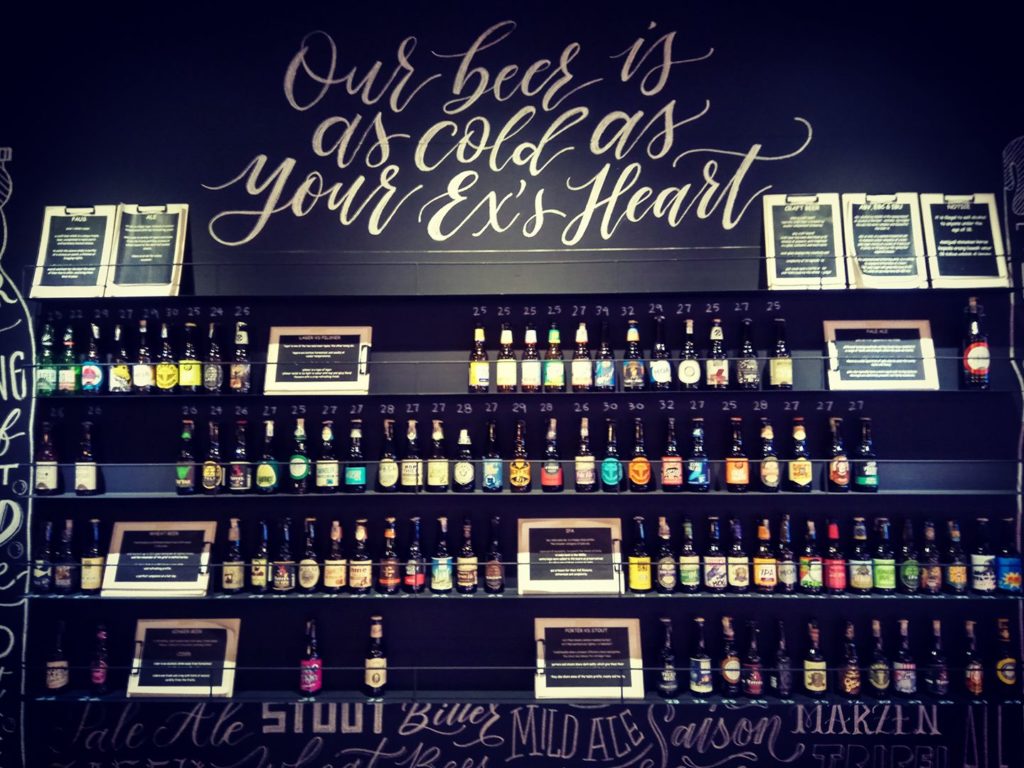 Paus wants you to have a whale-y good time drinking beer in its bar. If you can’t find them on ground level, try looking one floor up. The bar takes on an industrial design with metal open-shelves, exposed brick walls, and heavy wooden bar tables and stools. On the craft beer end, they stock over 50 types of craft beer bottles. Currently, most of their wares come from Australia, New Zealand, and Japan. They also serve small bites to accompany your beer, because any true beer drinker will know that having something to snack on makes it taste all the better. 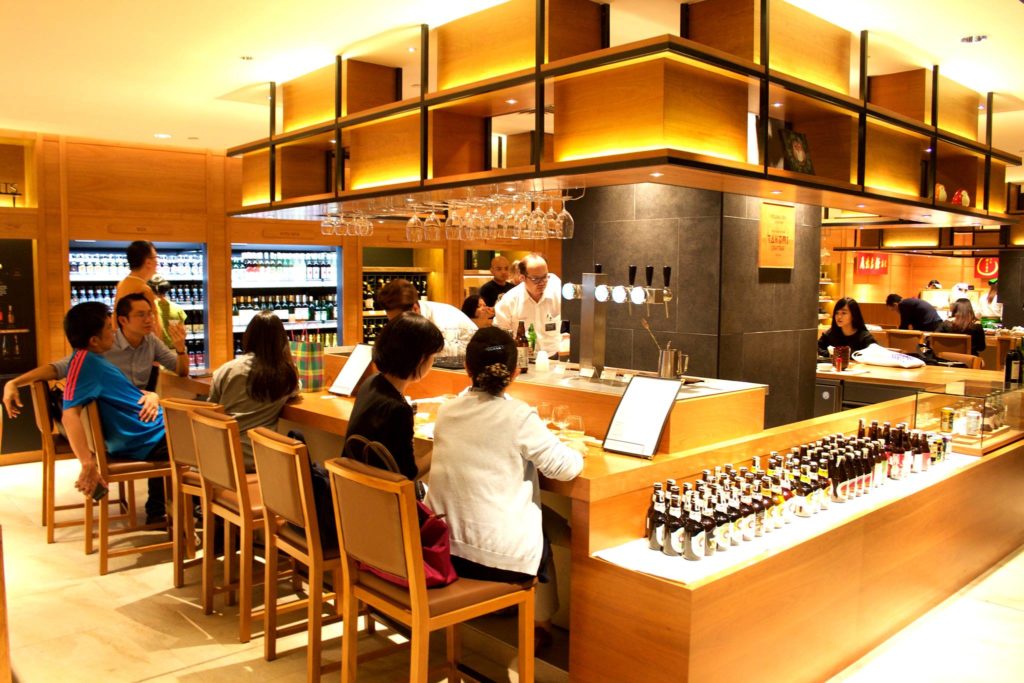 The basement floor of Isetan The Japan Store in Lot 10 shopping mall is a treasure trove of culinary delights. Among them is Takumi Craft Bar, a little island of a bar set within chiller after chiller of craft beer bottles and other assorted alcoholic drinks, including the widest selection of sake that you can find in KL. After a hard day of shopping, settle yourself down on the stool and pick your craft beer of choice. Unfortunately, they only serve Japanese craft beer. Fortunately, everything the Japanese does is bound to be excellent. You may already be familiar with the signature owl from Hitachino Nest Beer. They also have Echigo Brewery and Shiga Kogen available on tap. What makes this place even better is that you can buy food from the vendors in Isetan The Japan Store and have it with your beer. Freshly grilled beef or sashimi? That’s going to be a difficult pick. 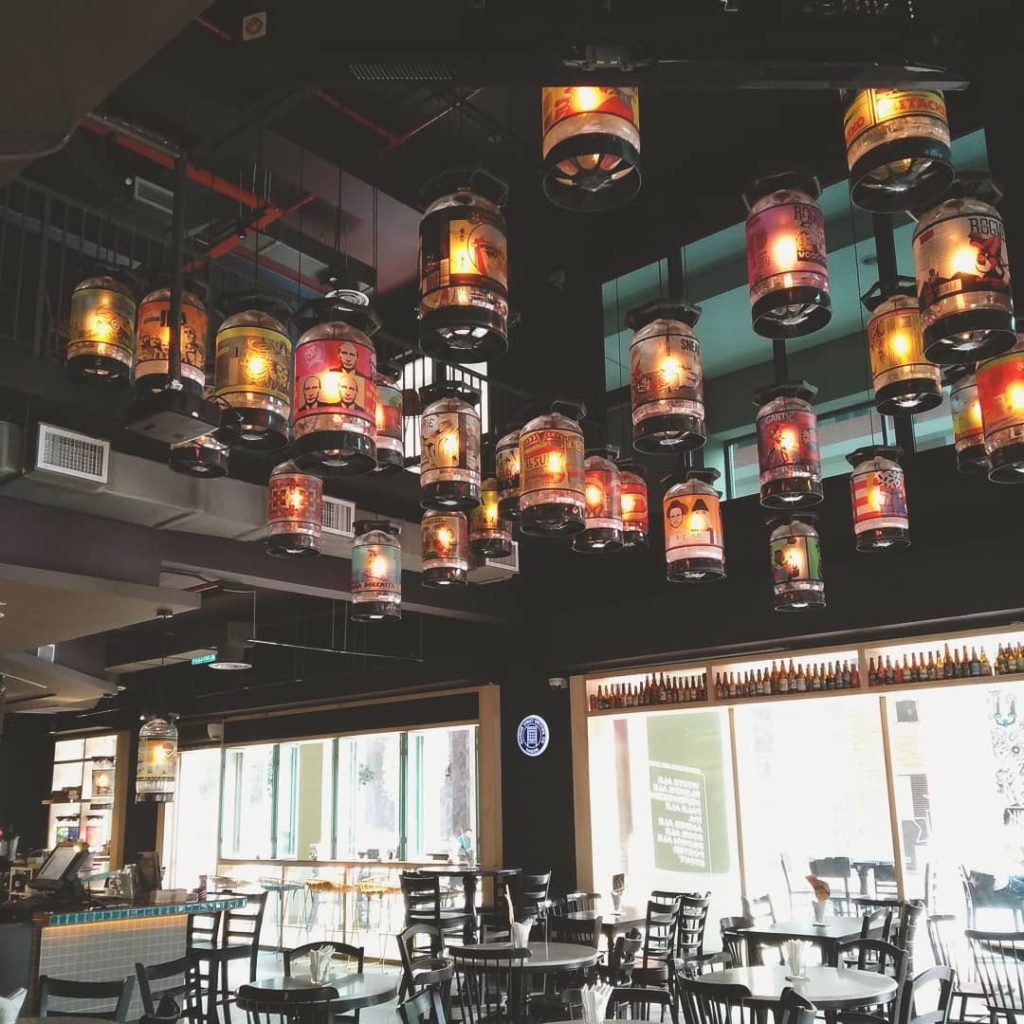 Imagine a bar that has row after row of taps dispensing only the most quality craft beer. Sounds like a dream, yet it’s precisely what’s happening over at Taps Beer Bar. They first started out in Jalan Nagasari but quickly managed to branch out to bigger, better spaces — all the better to spread the love of craft beer. What Taps Beer Bar does well is variety. We’re talking about over 30 brands on tap and a mix of popular bottled brands as well as the lesser-known ones, including Pasteur Street from Vietnam. The Great Beer Bar is the younger brother of Ales & Lagers, but you wouldn’t know it in terms of size. It occupies a full shop lot in Damansara Uptown and serves a wide variety of craft beer bottles and beer on tap. In fact, their beer on tap changes frequently, as you will be able to tell from the chalkboard above the taps. Take a seat, relax, and maybe order some food to go with your beer. They’re pretty well acquainted with pork, which you will be able to order in several different ways — roasted pork belly, pulled pork shoulder sliders, BBQ pork spare ribs, pork chop, and more.

Craft Beer The Great Beer Bar craft beer in KL kl craft beer taps beer bar ales & lager paus paus beer bar takumi craft beer
PohNee Chin
Editor, Kuala Lumpur
Poh Nee is the editor and writes about travel and drinks. When she's not living out her holiday dreams via Google Earth and sipping on an Old Fashioned down at the local bars, you can find her snug at home bingeing on Netflix and mystery fiction. Reach out to Poh Nee via email at pohnee@lifestyleasia.com.
Travel Drinks