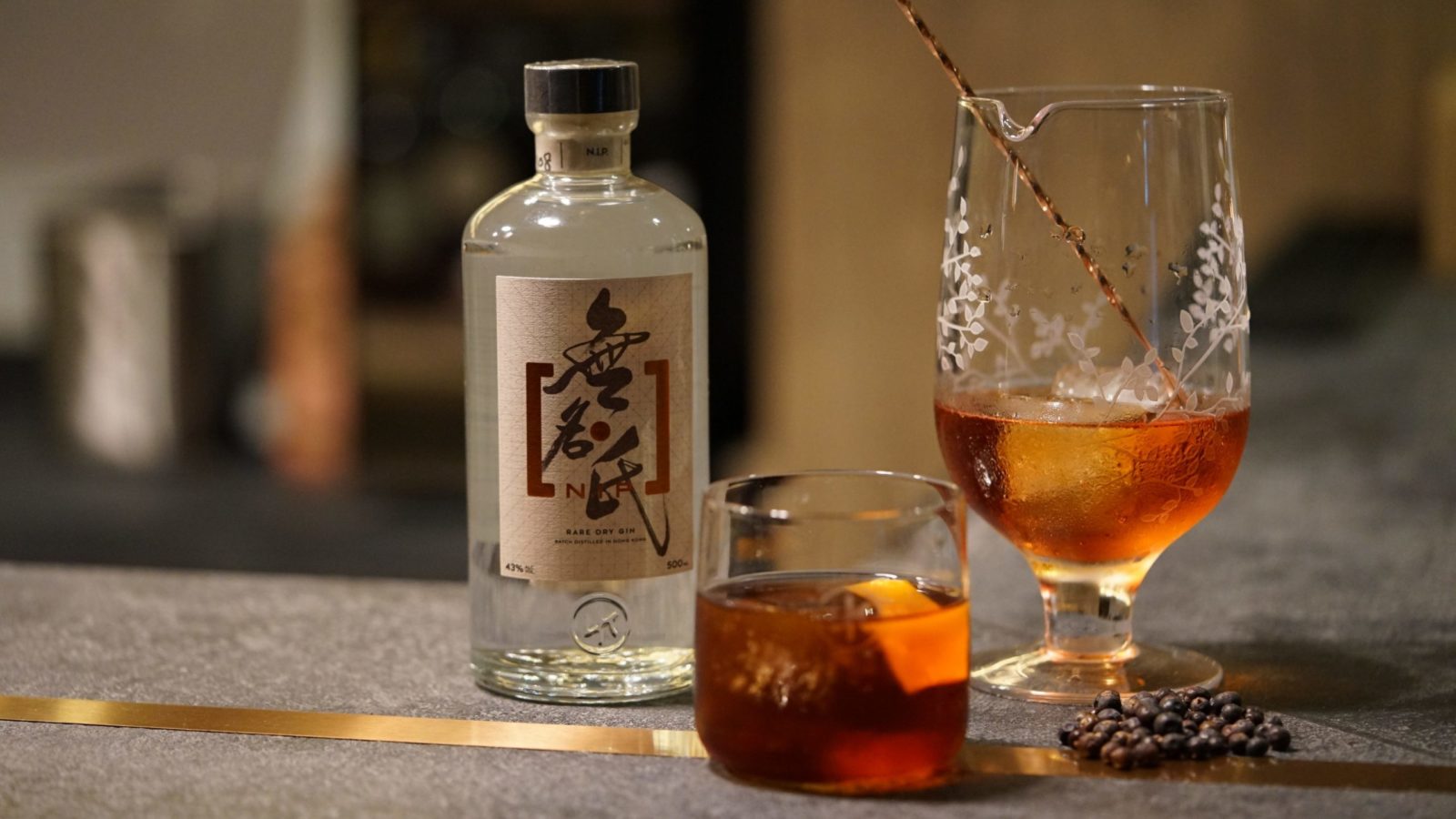 Everything you need to know about Hong Kong gins

Despite what the naysayers say, gin is still big and booming – and Hong Kong gins gunning for it.

Back in the era of Prohibition, people craving a drop of forbidden alcohol usually had to make it themselves. As gin was distilled behind closed doors, the spirit exploded in popularity, favoured as it allowed for virtually endless flavour profiles, and was easier and quicker than making whisky, which took a lot longer to age.

While craft gins continue to be back in vogue around the world today, Hong Kong has also recently become a melting pot of local gins, both conceived of and produced there. Just last year, Hong Kong was the proud host of three homegrown gin festivals, showcasing some of the best international and local craft gins alike. We take a look at these very Hong Kong gins you’ll want to put on your radar.

After first starting production in September 2019, Two Moons officially launched in December 2019 as one of Hong Kong’s first gin distilleries. It’s named after Luna, their stunning custom-built copper still from Germany (made up of two round shapes, its hand-hammered helmet and pot resemble two orange moons). Founded by gin enthusiasts Dimple Yuen and Ivan Chang, who use a one-shot distillation to make each small, 100-bottle batch by hand, their love of the craft is apparent through the packaging. Each bottle features an illustrated parrot, a symbol of the distiller’s parrot, or the final tap from where the finished product runs. All waste is currently composted and sent to a neighbouring urban community farm. Two Moons welcomes guests to their Chai Wan distillery (prior appointments necessary) to taste test the London Dry-inspired gin. In the future, they will also welcome guests for workshops to infuse their own gins with a custom selection of botanicals.

NIP Gin founders Jeremy Li and Nick Law received their liquor factory license in August 2019 and was operational by December. Standing for ‘not important persons’, NIP is a craft gin celebrating the underdog spirit, the grit and persistence that is synonymous with the ‘Lion Rock Spirit’ of Hong Kong — where “anyone can achieve their passion as long as one is willing to take that leap of faith.” Both founders did not come from beverage backgrounds, so the name is more an emblem of their perseverance to make a name for themselves — in a city not commonly associated as a spirit-making destination. Made under the flag of Hong Kong Craft Distilling Co., the duo has plans to expand to other spirit categories in the future.

The gin: Distilled using traditional methods in an artisan Carl copper still (the German still manufacturer for renowned gin brands such as London’s Sipsmith, Yarra Valley’s Four Pillars, Kyoto’s Ki No Bi and more), NIP Gin is a highly refined product that can be sipped directly from the still even at a high proof. The 11 botanicals feature a locally inspired flavour profile to pay tribute to Hong Kong, featuring longjing and shoumei tea leaves, aged tangerine peel, goji berries, fresh ginger and osmanthus. The result is smooth, slightly sweet and complex with the addition of tea.

Handover Gin, made by keen homebrewer-turned distillery owner and New Zealand-native Steven Newton, is the first bona fide gin made from scratch in Hong Kong. After getting the necessary paperwork and establishing Hong Kong Distillery in 2015, Newton had the help of a crowdfunding campaign on IndieGoGo on top of his own investment to run the distillery out of premises in Tsuen Wan. Before public launch, the gin had already won awards at the Cathay Pacific Hong Kong International Wine & Spirit Competition. The gin itself is made using a house-made vodka as a base before all the botanicals are added to the still, hence being Hong Kong’s first gin.

The folks behind the popular Gweilo Beer — one of Hong Kong’s first craft beer breweries — have expanded to the spirits category with the recent launch of Gweilo Gin. Co-founder Joseph Gould recalls the first interest in making gin came from a 2018 collaborative project with Japanese brewery Kagua to celebrate Gweilo’s launch in Japan. “We made a Hazy Yuzu IPA and when we held and smelt the yuzu for the first time, our initial reaction was that it would be amazing in a gin!” Gweilo Gin henceforth did a series of bench trials to test other ingredients that would go well with yuzu. Distilled in Bermondsey by the London Distillery Company, Gweilo Gin has recently been recognised with a bronze medal from the World Gin Awards.

The gin: Gweilo gin is yuzu-forward, but also uses the signature hop from the Gweilo Pale Ale, Mosaic, which imparts tropical and stone fruit aromas. These complement flavours of mango, pine and citrus, which are all used in the gin itself, and shine through wonderfully in a G&T. Look for it at Ginsanity, Hong Kong’s first outdoor gin festival launched last year, reportedly returning in May.

Founded by mixologist Kit Cheung Yan-kit and business partner Joseph Cheung, who met in a cocktail workshop, Perfume Trees is their poetic ode to Hong Kong, which began in a converted Chinese ancestral hall just outside Tsuen Wan, now considered as Perfume Trees’ ideation lab. The result is a poignant picture of Hong Kong through each botanical they have selected, as well as in the unique bottle designs (and limited edition pieces) that are love letters to Hong Kong’s heritage. The ingredients are sent to the Netherlands, where it is distilled and bottled. It’s a costly endeavour, but Perfume Trees has perhaps made the most prolific impression on Hong Kong gin-lovers in recent years, appearing on the shelves of some of the most distinguished gin bars in Hong Kong and widely distributed at mainstream liquor stores throughout the city.

The gin: Perfume Trees’ choice of botanicals draws strong links to stories from Hong Kong’s past. For instance, sandalwood is a nod to Hong Kong’s history as a trading port for agarwood, used to make incense, and which eventually earned us the moniker ‘Fragrant Harbour’. White champaca, a flower from the magnolia family, was often sold decades ago by elderly women who picked the fragrant flowers to sell and sustain their families. Other notes include coriander seed, liquorice, cinnamon, Chinese angelica wood, 15-year-old aged tangerine peel, and longjing green tea, making it a fragrant, lightly spicy and refreshing gin that’s perfect for a summertime G&T.

It may be officially made in London on contract by Thames Distillers, but its namesake naturally ties the gin to Hong Kong’s ubiquitous emblem, the bauhinia flower, found on our flag, coins and coat of arms. Bauhinia Gin indeed is a love letter to Hong Kong, with everything from the packaging to the use of botanicals. Crafted as a London Dry gin, the botanicals are steeped in neutral grain spirit at reduced strength, with deionised water and neutral grain spirit added back to return the gin to bottling strength.

The gin: Peppery and floral, Bauhinia Gin uses real Hong Kong Bauhinia flowers as one of its key botanicals, on top of a recipe that includes grains of paradise (a cousin of ginger and cardamom) and other Asian spices. It’s ideal in a G&T or in an icy martini with an orange twist.

Other regional gins to know…

Porcelain is an up and coming ‘Shanghai Dry gin’, created in collaboration between Hong Kong’s own Ming Fat Group co-founder Shakib Pasha and Hubert Tse, who comes from a family of spice makers in Liaoning, who also supply the botanicals. It’s also where Porcelain gin is produced. Following similar parameters to what constitutes a London Dry Gin, a Shanghai Dry gin must contain at least 90 percent Chinese-native botanicals, is one-shot distilled with a result of at least 70 percent alcohol by volume, and nothing added after except water. Porcelain gin comes in two varieties: the Shanghai Dry gin and a Dry Gin Mandarin Edition — both bottled in fabulous flacons designed by Hong Kong ceramic experts Loveramics in a nostalgic style celebrating its heritage. Spot it around your favourite Hong Kong bars as it launches for distribution very soon.

The gin: The Shanghai Dry gin features, for the first time in the world, Mongolian juniper berries, as well as a range of Chinese spices and berries including Sichuan peppercorn, cardamom, coriander seeds, almonds, hazelnuts, orange, lemon, grapefruit, as well as lavender and rose, plus six other secret ingredients.

Hong Kong Gins Perfume Trees Bauhinia Gin Two Moons NIP Gin Handover Gin Gweilo Gin
You might also like ...
Food & Drink
How to pair your gins with artisanal tonic water, according to East Imperial ambassador Jamie He
Food & Drink
Best bottle shops in KL to stock up for your next party
Food & Drink
Best gin bars in KL for a strong selection of your favourite spirit
Food & Drink
These gins with unusual botanicals will rock your palate
Lifestyle Asia
Here's where you can read the latest news and stories from Lifestyle Asia and our sister titles PrestigeOnline and Augustman, curated from all of our editions in Hong Kong, Singapore, Kuala Lumpur, Bangkok and India.
Luxury