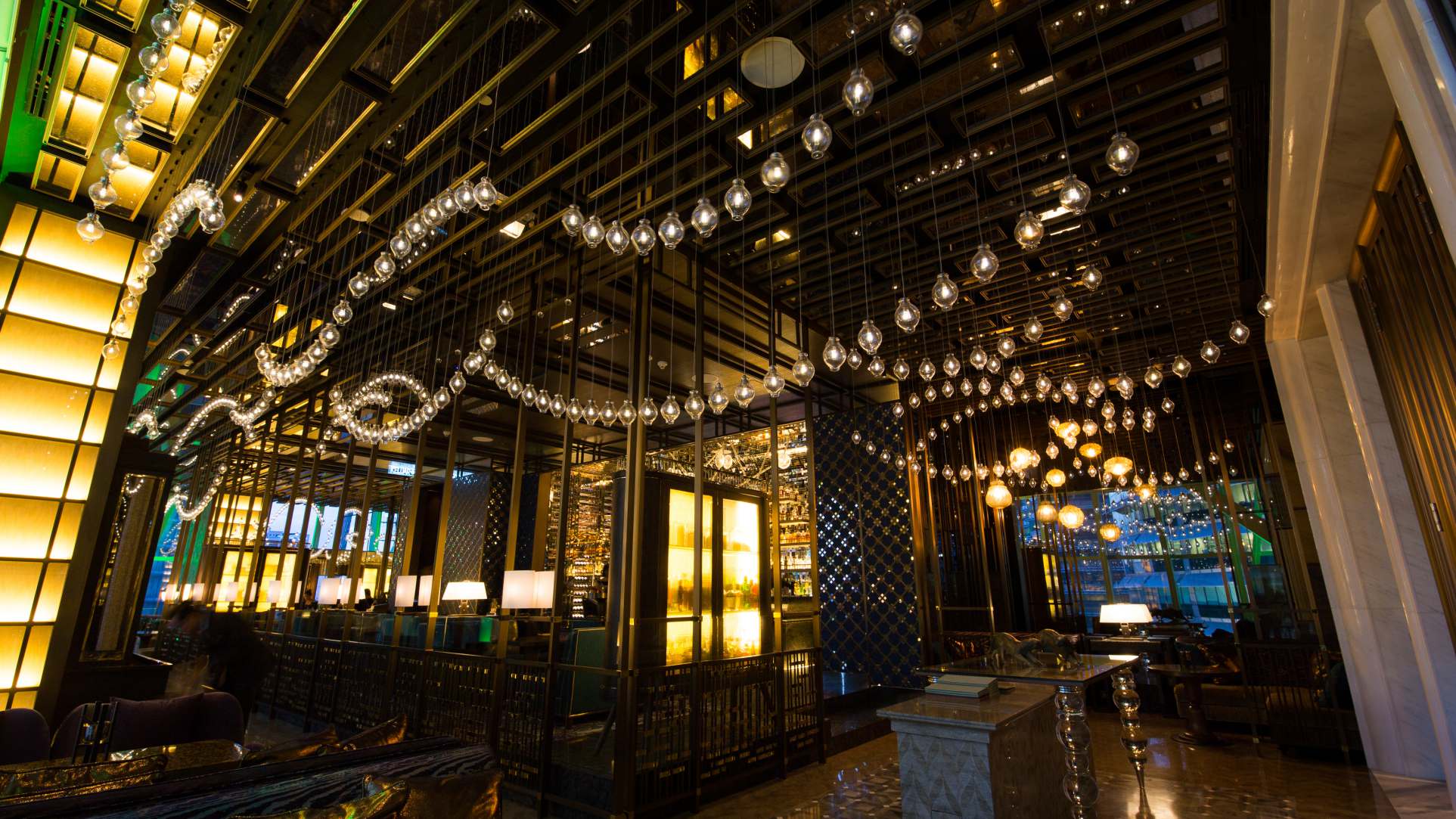 There is a tiny stingless bee native to Malaysia, that produces a small but quality batch of honey with a sourish sweet taste. Yet, not many locals know of this bee or the honey that it makes. Instead, they flock towards foreign-produced honey such as Manuka honey. This stingless bee is called the Trigona bee, and it forms the basis of Bar Trigona in the Four Seasons KL.

Helmed by head bartender Ashish Sharma of Manhattan fame, Bar Trigona is set to be the latest and hottest place in town for a tipple. It certainly helps that the interior of the bar is iconically lavish. But look beyond the glossiness and you’ll find that the cocktail menu is a strong one, designed by Sharma and his team after a long tour around the farms of Malaysia. Working with local farms to champion the use of locally grown ingredients, it was then that Sharma stumbled upon the little-heard-of Trigona bee and its honey. The rest, as they say, is history.

Ambience
Hidden behind a faceted glass door in The Lounge, the first thing you’ll notice when you step into Bar Trigona is the amount of reflective surfaces it has. Truly a place that self-titled magpies would love, the bar area is perhaps the most prominent (and Instagrammable) spot of the bar with its mirrored mosaic walls and lights in the shape of the Chinese diabolo.

But look closely at the mosaic walls — it’s no regular mosaic tiles. Instead, they have been patterned to look like traditional Malay weaves on the ketupat — one of the subtle ways that the hotel does to pay homage to the local culture. Venture beyond the bar area and you’ll find the deep teal and gold seats are as plush and sumptuous, reminding you that you are in the capable hands of Four Seasons KL.

Nestled on the seventh floor of the building, Bar Trigona’s views may fall short of its other hotel counterparts that are located on rooftops. But what it lacks, it makes up for during golden hour. When the evening sun streams in, the reflective surfaces in the bar bounce off the golden rays, making for a spectacular sunset tippling experience. Don’t forget to look up once in a while and admire the lights that have been arranged into a soothing wave-like design.

The cocktail section has been artfully divided into four sections of a plant: the fruit, root, leaf and flower, and the stem and seed. Each section features four cocktails and a mocktail for the designated chauffeur of the night, or simply for those who wished to not consume alcohol but don’t want to miss out on the fun. The Trigona honey is present in most of the cocktails, being the signature feature of the bar.

But that’s not all — Sharma also places importance in using local ingredients, which he has painstakingly sourced from farms around Malaysia. For example, the Trigona honey comes from a small farm in Negeri Sembilan, while the figs are sourced from a farm in Shah Alam itself. His idea is to ensure that the local flavours are present, but not overpowering.

We try a cocktail from each section, starting with the Pollen, a citrusy and creamy cocktail made of applejack, citrus, trigona honey, yoghurt, and kaffir lime leaves. Fans of peaty whisky will enjoy the Kelulut, a fresh-tasting cocktail with a smoky aftertaste made with bourbon, peaty whisky, trigona honey, grapefruit, and rosemary. Naturally, the name “kelulut” is derived from the indigenous name of the stingless bee.

Sharma also does his own take on the classic Old Fashioned that features, predictably, trigona honey in place of muddled sugar. The honey lends the Trigona Old Fashioned a sweeter aroma with a herbaceous aftertaste but doesn’t completely alter the original taste of the classic cocktail. For a change of taste (and temperature), try the Bolio on a rainy day. This warm cocktail will keep you feeling toasty. Served with a side of local figs, the warm cocktail is concocted with homemade rose apple cider and whisky, giving it a sour and tangy flavour. Take a bite of the fig and then sip on the cocktail.

But if you’re in the mood to share your cocktail, try this one for size: Bitters & Smoke. The tequila-based cocktail is smoked with green chartreuse and ginseng before being steeping with honeycomb overnight in a bottle that serves three cocktail portions. The ginseng is the first and most prominent fragrance you get when you drink the cocktail, despite just smoking the cocktail with it. Once you get past the initial ginseng taste, you’ll be rewarded with a literal bittersweet cocktail thanks to the honeycomb infusion and mezcal.

Verdict
With Sharma as the head bartender, Bar Trigona is definitely the place to get your cocktail fix in a swanky environment. He brings his expertise to the KL scene, giving us the conceptual hotel bars that we so deserve. Sharma has also cemented a strong concept for the bar, ensuring that its brand identity of championing local ingredients is one that can also sit well to foreigners who may not be as adventurous. Although you’re technically drinking in the Four Seasons KL, you won’t go broke doing so — prices of drinks at Bar Trigona are comparable to that of your favourite cocktail spots in KL.

Bars in KL Cocktail bars in KL Manhattan Bar four seasons kl Bar Trigona Four Seasons KL Bar Trigona ashish sharma cocktail bars kl
PohNee Chin
Editor, Kuala Lumpur
Poh Nee is the editor and writes about travel and drinks. When she's not living out her holiday dreams via Google Earth and sipping on an Old Fashioned down at the local bars, you can find her snug at home bingeing on Netflix and mystery fiction.
Travel Drinks