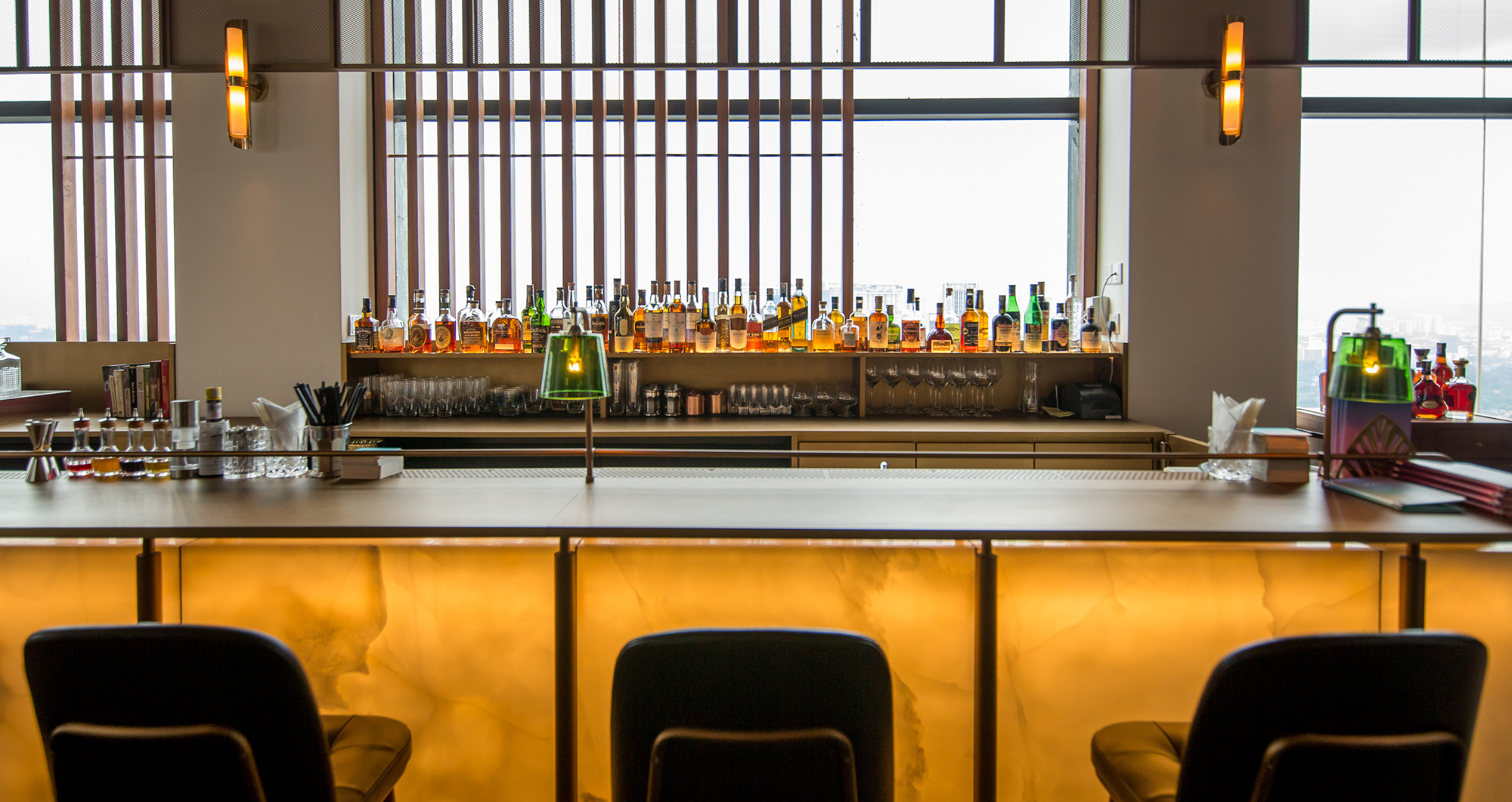 It was the 1920s in America and the Prohibition Act had just been declared, banning all sales of alcoholic beverages. While the dry season only lasted a decade before it was lifted, some states continued Prohibition until the final state, Mississippi lifted the ban in 1966.

The 50s was the height of alcohol appreciation with bars taking spirits more seriously and tackling the cocktail craft heads on. California bars have a specific sunny enthusiastic side to it — party-goers would throng to Los Angeles and San Francisco to have a good time, while its East Coast neighbour New York captured the broodiness of drinking. That specific sunny vibe was what Pacific Standard Bar intended to capture when they opened inside of Alila Bangsar.

In the same vein with Alila Bangsar’s resort-in-a-city vibe, Pacific Standard Bar’s is a far cry from the dim, moody ambient synonymous with most hotel watering holes. Step inside the space located on the 41st floor during the day and you’ll see sunlight filling up the place, wooden beams casting shadows on the floor and the KL city skyline up ahead.

Sunset is when the spot is at its prettiest, with golden hour lighting up the bar in gorgeous colours of orange, pinks, and purple. When night falls, the city comes to life and the view is quite literally, lit. Take your seat by the bar and watch head bartender Ruben Anandha at work. If not, there are group seats indoors and outdoor too. The bar was designed by Neri & Hu, a well-known Shanghai-based design firm who was also in charge of designing the rest of the hotel.

The cocktail menu is divided into four sections, each with its own distinct personality. If you’re in the mood for light and refreshing drinks, look out for the Hollywood Highballs section. Trip The Lights Fantastic holds juicy and firm-tasting cocktails. According to Anandha, pick drinks from this section when “you want a mouthful of experience with full-flavoured cocktails.”

Need a stiff drink? The L.A. Noire section of the menu is your best bet. “It’s spirit on spirit drinks — powerful and bold,” said Anandha. Finally, the last part of the cocktail menu is Sweet Tooth. As its name suggests, the cocktails veer towards the saccharine side, which Anandha likens to dessert. “You’ll want this at the end of the night to wrap up your drinks, almost like the dessert to your cocktails.”

Just as much as Pacific Standard Bar wants guests to enjoy their cocktail, they understand that not everyone needs or wants alcohol. Hence, each section of the cocktail menu has a special mocktail. Nicknamed ‘For the Chauffeurs’, each one is a non-alcoholic take on a classic cocktail — none of your standard watermelon coolers here. One of them is the No-Groni, a non-alcoholic version of the Negroni but with the same flavour profiles.

We got to try a cocktail from each category. From the Hollywood Highball section, the Mai Tai was made with a house-infused coconut rum. Made by Anandha himself, the coconut flesh was toasted and cooked with milk before being infused with the rum. The resulting flavour lends a sweet, caramelised taste to the refreshing Mai Tai.

In Trip The Lights Fantastic, we got to try the Sunset Swizzle, a great low-ABV cocktail that is as refreshing as it is fruity. We couldn’t agree more, as the pineapple rum swizzled with the house-made basil cordial, fresh lime, and mint made for a cocktail that made us want to go back for seconds.

For something that truly packed a punch, we had the Billboard Martini which also used a homemade infusion of citrus apple cider vinegar. It’s a modern take on the ol’ “shaken not stirred” with a tart flavouring. Finally, to wrap up our evening, we had a saccharine, caffeine-loaded Fat White Russian. Inspired by the classic Black Russian, Anandha gave the vodka and coffee-liqueur cocktail a sweet topping with boozy doughnut cream made of Krispy Kreme doughnuts.

Visit for the sunny ambience, stay for the drinks. The Pacific Standard Bar already stands out merely with its bright and airy interior, but it’s the sunny personalities of Anandha and his team that really draw you in, alongside the well-executed cocktails. Rather than just another hotel bar, Pacific Standard holds its own weight, so you’re compelled to visit it on its own and not feel intimidated by the fact that it’s situated inside Alila Bangsar.

PohNee Chin
Editor, Kuala Lumpur
Poh Nee is the editor and writes about travel and drinks. When she's not living out her holiday dreams via Google Earth and sipping on an Old Fashioned down at the local bars, you can find her snug at home bingeing on Netflix and mystery fiction.
Travel Drinks