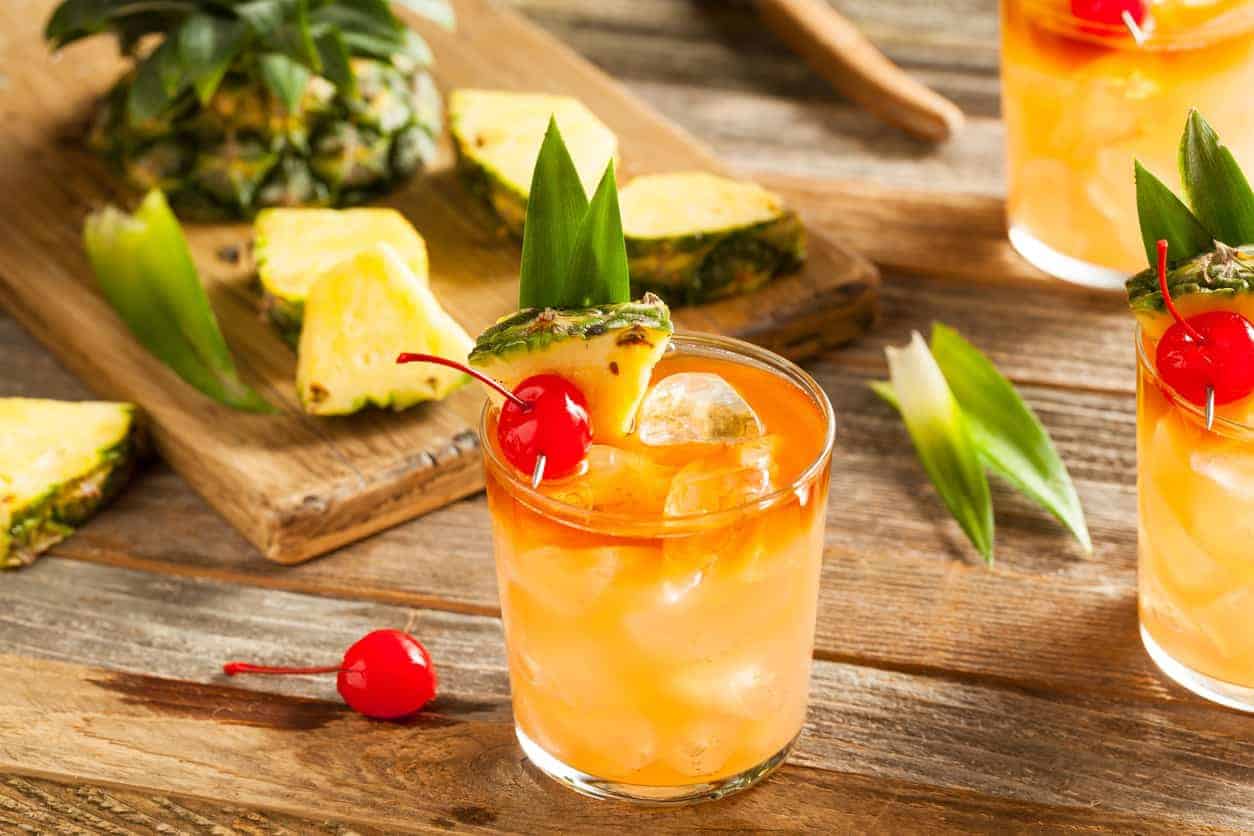 5 classic tiki cocktails to know ahead of their comeback

Rupert Holmes’ everlasting hit, Escape, is a song that exactly captures the mood a tiki cocktail should put you in. He might be singing about piña coladas (which are Puerto Rican, not tiki), but the summery rhythm — the kind that makes you want to dive headfirst into a long, cold pool as the sun bronzes your back — is an aural version of how tropical cocktails embody the happiness you feel when detached, far away on holiday and perhaps a bit drunk on rum and vitamin D.

Tiki cocktails have maintained their position as beach vacation classics, but outside of that sunny sphere, this tropical category has gone through quite the turbulent fall from grace with the mainstream drinking market since its origins in the 1920s.

The history of tiki cocktails

Let’s get this clear — tiki drinks are in no way associated with Polynesian culture. The connection is loose at best. Like any other widespread global movement, tiki cocktails were born out of a capitalistic enterprise. One man, Ernest Gantt, best known as Don the Beachcomber, was so inspired by the island life and culture he was exposed to during his travels around the South Pacific and Caribbean islands that he brought it all back to Hollywood and decided to commercialise aspects of it. The Texas native decked out the restaurant’s bar in tropical décor, devised some cocktails with rum and fruit juice, and disseminated the “exotic” novelty to the state.

Tiki cocktails at Don the Beachcomber offered drinkable fantasies of far-flung lands where palm trees swayed atop crashing waves all-year round, and word has it that the drinks were not half-bad either. The proprietor was a big rum collector and believed in using a variety of the sugarcane spirit (i.e., not throat-dissolving low-quality rum) and fresh juices in his inventions.

World War II soon swept in to quash that fantasy, but later in the 40s to 50s, this themed bar breed experienced a renaissance across the West Coast, a growth in tandem with Hawaii’s ascension as a hot tourist destination for United States citizens. Tiki mugs, hula accents, fruit syrups and bamboo bar counters abounded. The gimmick had officially landed.

Fads, unfortunately, must die. Tiki cocktails lost most of their lustre as the quality of the drinks dipped. Saccharine fruit syrups, ornate garnishes and neon-coloured liqueurs replaced the fresh vibrancy of the original versions, and people ditched the kitsch in favour of other beverages.

Across the past few years, a handful of contemporary cocktail bars have decided to respectfully revive tiki classics, primarily in America. Three Dots and a Dash in Chicago, as well as Latitude 29 in New Orleans, rescued tiki cocktails from its bad reputation. The latter, opened by leading tiki authority, Jeff ‘Beachbum’ Berry, is all about reviving Don the Beachcomber’s flagship recipes.

Over in Asia, a smattering of refined tiki bars has also acquired a global reputation. Kuala Lumpur has JungleBird, a rum bar named after a bona fide tiki drink, ranked 38 on the Asia’s 50 Best Bars list, making it the best in Malaysia. Here in Singapore, Daniel Boulud’s DB Bistro and Oyster Bar hosts Tiki Tuesdays every week to draw the crowds.

It’s just a matter of time before full-blown tropical concepts begin to surface in our region.

The Mai Tai is the OG tiki cocktail. It was invented in the 40’s at Trader Vic’s, an Oakland-based tiki franchise that went head-to-head with Don the Beachcomber. The name is a play on “maita’i”, which means “good” in Tahitian. Cocktail lore has it that the founder of Trader Vic’s, Victor Bergeron, made the drink for a friend from Tahiti, and she was so happy, she exclaimed “maita’i!” when she took a sip. When Elvis Presley’s Blue Hawaii screened in the ’60s, the Mai Tai became the definitive tiki cocktail.

A standard recipe includes most of the trimmings one expects from a tiki drink. Good Jamaican rum thick with the taste of molasses, orange curaçao, freshly squeezed lime juice and a small drizzle of orgeat syrup (a sweetener made with almonds and flower water) are shaken together and served on ice. Make sure the citrus really comes through with your mai tai, as that is the benchmark of goodness.

The rum swizzle is one of the few tiki drinks with actual roots in the Caribbean. Its name stems from a uniquely West Indies mixing technique used to incorporate ingredients, where a long stick would be swizzled up and down a vessel between both palms.

The standard template of a rum swizzle is the dark spirit, a tart fruit juice or a mix of a few, crushed ice and a sweetener. Falernum, a spice and nut-based syrup, is a popular choice, but grenadine is also used for colour. We staunchly stand for the former, because it adds an earthy depth to the resulting drink. Add crushed ice into the car, and get swizzling.

Another popular variation is the vegetal rhum swizzle, made with rhum agricole. For those who don’t know the distinction, rum is typically in reference to the spirit obtained from fermenting molasses, and it is usually made in Jamaica. Rhum agricole is its Martinique counterpart, a more green and delicate variation created by fermenting raw sugarcane juice.

Hotel bars are like breeding grounds for cocktail innovation. While most classics were invented in stately Western establishments like The Ritz and The Savoy, the Jungle Bird was created close to home, at the Aviary Bar in Kuala Lumpur’s Hilton Hotel.

A Jungle Bird is a simple libation, made with five ingredients. Dark rum, fresh lime and pineapple juice, as well as simple syrup, are textbook tiki elements, but the Jungle Bird calls for an unexpected inclusion: Campari.

Bitterness creates balance between the sweet and citrus notes, adding dimension to a cocktail that would otherwise be just another fruit-and-rum medley. Rev up the intensity of the drink by opting for blackstrap rum instead. Coloured like the blood of goths, blackstrap rum is a blended rum mixed with the darkest of all molasses, so it bears hints of stewed banana and caramel.

The Zombie was invented by Don the Beachcomber. Whispers in the annals of cocktail history say that it was invented for a regular customer who was painfully hungover and had a business trip to depart on.

A trio of rums form the base of a Zombie — golden, Jamaican, and 151-proof demerara. Then, absinthe and low-proof falernum are added, totalling the count of booze variants to a liver-choking five. Grenadine and cinnamon syrup is added to sweeten, along with lime and grapefruit juice for zest. Angostura bitters top the poisonous drink, best enjoyed in a long glass with heaps of ice.

Don the Beachcomber was obviously a firm believer in hair of the dog hangover cures, but it’s safe to say that the customer returned none too happy. He complained of feeling like a zombie throughout the trip, and thus, the drink was dubbed.

The Singapore Sling does fall under the tiki umbrella. Its composition, flavour and trajectory is a neat fit into the category, and though it was invented slightly earlier than the initial tiki boom, most experts accept that Singapore’s national tipple owns a place in the family. To find an original recipe is a challenge, but the standard formula involves gin, cherry brandy, orange, pineapple and lime juice, with Bénédictine and Angostura bitters dashed in to temper the sugar.

What makes the Singapore Sling curious is that everything we’ve been fed about its creation is suspect.

Local history says that one Ngiam Thong Boon, a bartender at the Raffles Hotel’s Long Bar, fathered the Singapore Sling in 1915, but cocktail historian David Wondrich cited local news reports in his novel, Imbibe, to expose how the drink has been around since 1897. It was made famous at the John Little department store, which had a bar catering to British expats fond of the gin-based sling.

Still, credit must be given where it’s due. Without the Long Bar’s fervent marketing, the Singapore Sling would’ve possibly become a relic of our past.

Mai Tai Tiki Cocktails Summer Cocktails Singapore Sling RHUM SWIZZLE jungle bird pina colada zombie classic tiki cocktails tropical tiki cocktails
Beatrice Bowers
Features Editor
Beatrice Bowers writes about beauty, drinks, and other nice things. When not bound to her keyboard, she moonlights as a Niffler for novels and can be found en route to bankruptcy at your nearest bookstore. Don't tell her boss.
Drinks Beauty
Sign up for our newsletters to have the latest stories delivered straight to your inbox every week.

The best weight-loss friendly protein smoothies to drink after gym