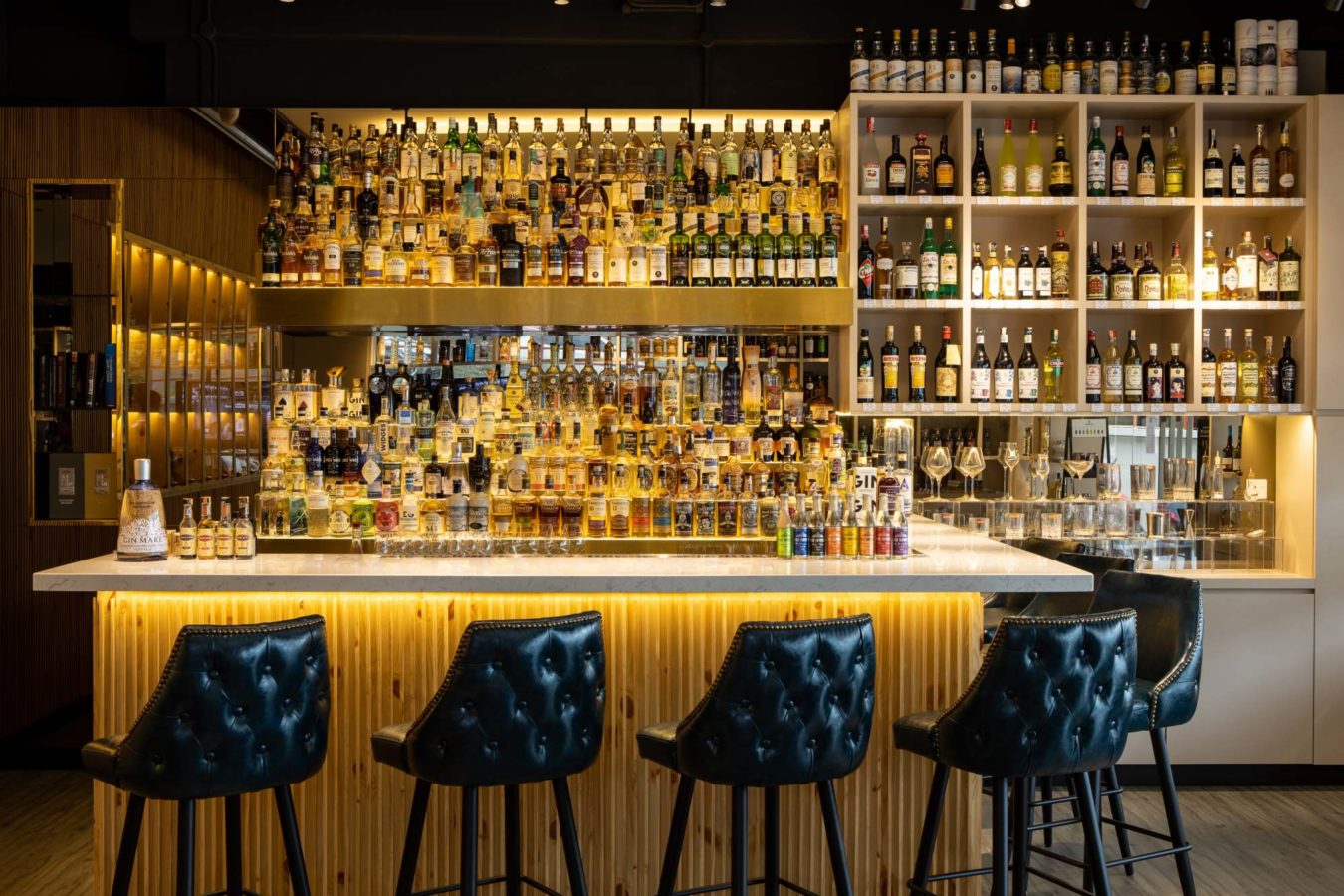 Q&A: How Wholly Spirits introduced a new era of artisanal spirits to KL

Food & Drink
Q&A: How Wholly Spirits introduced a new era of artisanal spirits to KL
Share this article
Next article

A chance encounter and a love of whisky brought four men together, culminating in a brand determined to make artisanal spirits a mainstay in Malaysia.

For many years now, most Malaysians introduction to the world of alcoholic spirits were limited to only know famously known brands out there: Chivas Regal, Beefeater, The Macallan, and the like. Not that there’s anything wrong with it, but it meant that our options were pretty limited, and trying out new things would mean going out of our comfort zone.

In fact, the only opportunity we had to have a little taste of artisanal spirits was probably from our cocktail bars. Even then, you’d only be able to try the good stuff if you’re on friendly terms with your bartender. But the scene slowly and surely changed when Wholly Spirits made its debut five years ago.

Wholly Spirits first started as a business-to-business (b2b) venture, bringing in smaller brand – but very high quality – spirits into KL for the local bartenders to use in their cocktails. Its first four founders met by chance at a whisky event, and, brought together by their love of imbibement decided to begin this business together after knowing each other for a mere six months.

“Looking back, starting a company with someone you don’t know in six months is crazy,” laughs Wholly Spirits co-founder Ooi Jin Boone, better known to most as JB.

As Wholly Spirits celebrated its five year anniversary in November, we sat down with the two remaining founders of the brand – JB and Shawn Samuel – to talk about how the business has evolved from being a b2b company to directly educating consumers and even opening a retail shop, as well as bringing the local bar scene to wholly embrace artisanal spirits.

When you launched Wholly Spirits, what were the first few spirits you brought in?

Ooi Jin Boone (JB): The 86 Co. products like Ford’s Gin, Cana Brava Rum, Tequila Cabeza, and Aylesbury Duck Vodka. Of course, they have since been bought over by Brown-Forman. These four were the first stock-keeping units (SKU) that we brought in.

Shawn Samuel (SS): And these are fast-moving products, unlike what I initially had in mind, which were luxury items. But these were meant to go into bars. Of course, it wasn’t easy then. We were competing with all the big boys. But I think those bars gave us this chance because we were willing to take a risk. The reason why we started Wholly Spirits wasn’t just to fill the gap in the market but also to improve the drinking scene and the community of drinkers in Malaysia. I guess until today that’s still our goal and I think we’ve done well to get to where we are today in terms of reaching that.

There were naysayers who said Wholly Spirits wouldn't last a year. Yet here you are, five years strong. Was that first year challenging for you?

SS: That first year in operations was literally blood, sweat, and tears. There was a lot of perseverance involved. But I believe we started on a good foundation of what Wholly Spirits was set out to do. We never wavered — even if things were going good for us, we’d always look back and ask ourselves: “Are we still in line with what we set out to do?”

And we were. That really helped us all the way. That still holds true until today. That is the reason of our success and it always keeps us grounded. At the end of the day, it’s because the foundation is good and we build upon it.

Many people might think it’s because we managed to get good brands, that’s why we’re able to do so well. It’s not true. You can have a really good brand and not do be able to do anything with it.

JB: You can take Diplomatico as an example.

SS: Yeah, Diplomatico has existed in Malaysia before.

JB: But when we took over, what the previous distributor did in a year, we managed to achieve in three months. We’ve probably tripled the sales that it had before we took over. By the end of that year, the Diplomatico CEO came to visit us — he wanted to find out what we were doing differently.

It's been five years now since Wholly Spirit's inception. How would you say you've changed the bar scene in Malaysia?

JB: We used to say this — we’re about five to seven years behind on Singapore’s cocktail scene. I’m quite confident to say that we’re now, at most, two years behind. One of the biggest evidence is having Bar Trigona enter the World’s 50 Best Bars. We’ve worked very closely with them since they opened and gave them plenty of support. They recognise us as a close partner with them too. Those are the best evidence to show that Malaysia is already on par with Singapore’s bar scene.

SS: It was one of our goals as a distributor. When it comes to bars getting into Asia’s 50 Best or World’s 50 Best Bars, it’s always the suppliers that take a step back. They don’t get the recognition, although they do work very hard behind the scenes. But we’re totally fine with that; we’re happy with the fact that we were part of that journey, to be able to help bars with getting into these awards. If you know those bars well, you’ll know that we’ve been there helping since day one and our brands have been very supportive of these bars. We hope to see these grow and we’re open to working with more bars like these.

You're pretty much set on the b2b part of Wholly Spirits. Just last year you opened your retail store. How are you planning to engage directly with consumers now?

JB: We wanted to do a lot of events and masterclasses here at our retail store.

SS: We were also supposed to launch our bar programme, but then the MCO happened.

JB: It’s a blessing in disguise because this means we have more time to work on the menu. Fingers crossed, we will be able to launch it after the second CMCO.

SS: When we opened the retail store last year, the response was really good and has continued being good. I think the reason for that is because we really stuck to our core foundation that I mentioned before and passed it on to our boys, Kay Kim and Jordan. They used the same concept but for our retail store, and our consumers are loving it. You won’t go into any retail store in Malaysia and get such good, hands-on knowledge about the liquor you’d like to purchase. We have a very solid team.

Within the consumers, which category of spirits are doing well here?

JB: Gin is by far the most popular, it amounts to nearly 50% of the sales followed by whisky. The rest is rum and tequila.

SS: I think gin is here to stay. A lot of people say it’s just a fad. A lot of people ask me, “Why gin?” You just have to look at our weather — it’s perfect for a Gin & Tonic and you can drink it all day long. I can’t give you a much better explanation as to why gin is doing so well.

Several people have said that rum is geared to take over gin. What's your opinion on that?

SS: Personally, I won’t say that rum is going to be the next gin. The reason is that it’s a dark spirit, and it’s aged. It’s very different from gin. I would say it’s a replacement for whisky because it’s a similar style of liquor. But if you notice carefully, there’s a resurgence of whisky-style rums out there, which I find mindblowing. That’s the next trend in the market, which will change people’s perceptions of rum. We have some here as well.

JB: People are switching to rum as well because of the price factor.

SS: Yes. It’s a lot more affordable compared to whisky. Whisky is coming to a point where it’s getting too expensive, especially the high-end stuff. Whereas rum, you can be saving 20-30% for something equally as good quality.

Final question: It's been five years now since Wholly Spirit came to be. What's going to happen in the next five years?

JB: On my side of things, I want to broaden the educational approach we have towards spirits in terms of having more retail outlets and business-to-consumer (b2c) points. Of course, it has to be in line with our ethos. We’re not expanding for the sake of expanding — we want to do it right. A bar is definitely down the road in the future. We’ll also strengthen our portfolio even more.

Interviews wholly spirits artisanal spirits
PohNee Chin
Editor, Kuala Lumpur
Poh Nee is the editor and writes about travel and drinks. When she's not living out her holiday dreams via Google Earth and sipping on an Old Fashioned down at the local bars, you can find her snug at home bingeing on Netflix and mystery fiction.
Travel Drinks