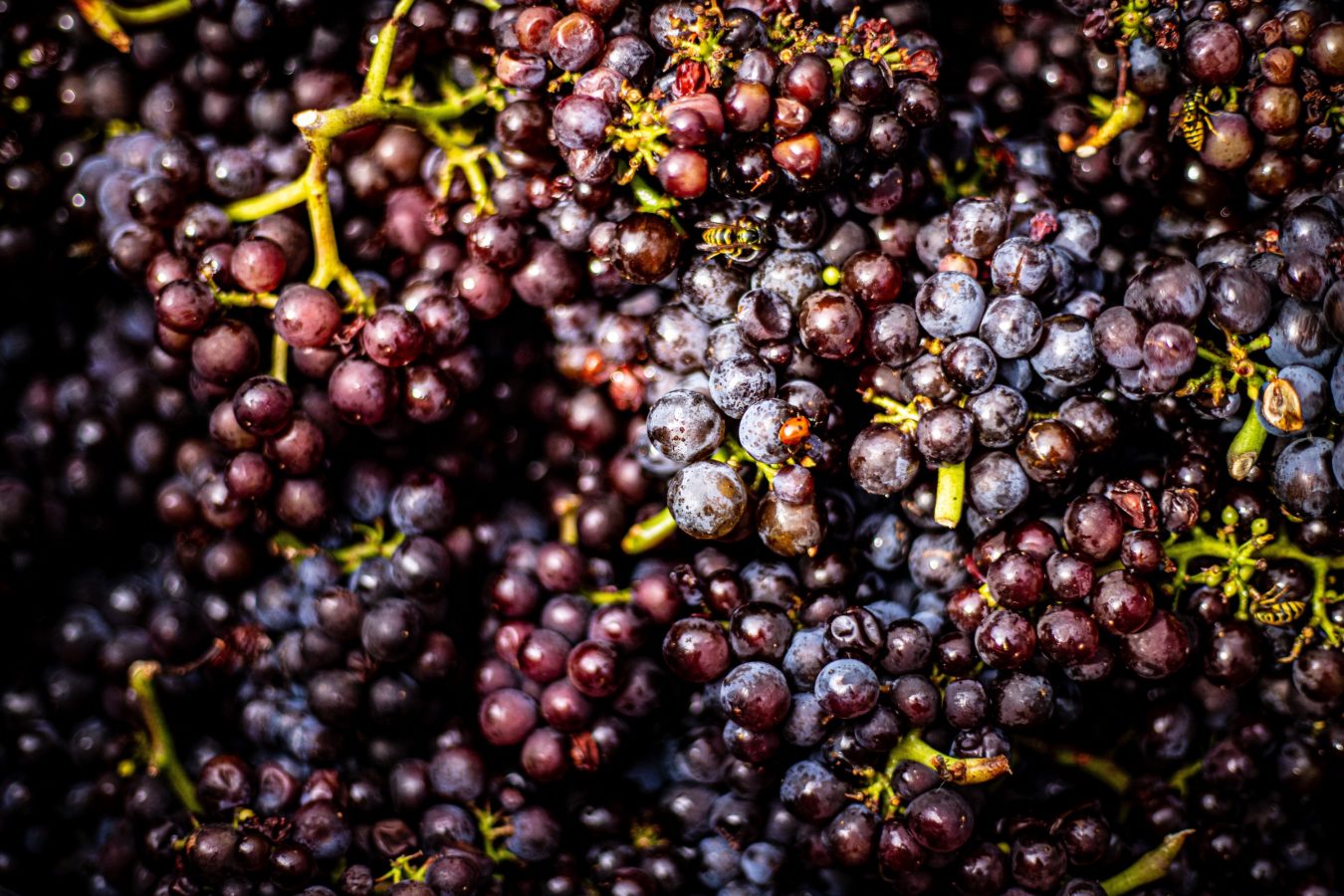 Understanding Burgundy wines can be daunting. This is especially true when it comes to their terroirs, classifications, domaines and vintages. Unlike those from Bordeaux, Burgundy wines consist of a single grape varietal – Pinot Noir for reds and Chardonnay for whites.

Very often, I’m amazed with the taste of Burgundy wines despite only one type of grapes being used in their production. One significant difference between Bordeaux and Burgundy wines is that Bordeaux chooses to classify theirs by producers, while Burgundy prefers by vineyards. As a result, it is easier to understand Bordeaux wines.

To comprehend Burgundy wines, it takes a lot of time reading and sipping. Most of the wines in Burgundy are made by small producers who have a small domaine. It is no surprise that the region counts over 4,000 domaines. More than 80% of them measure smaller than 10 hectares.

While it is difficult to fully grasp this wine region in a short time span, learning the names of some great producers would be of help when it comes to buying or selecting the right wines. There are a few established names that I really admire. I am sharing a couple which I savoured recently.

You might like this…
Food & Drink
Eiling Lim journeys to France and picks out the best wines in Burgundy
Food & Drink
Review: 2003 vintage red Bordeaux wines and why they matter almost 20 years later

Burgundy village wines you should really be trying:

The family settled in Vosne-Romanée in 1930 and now the domaine is managed by the third generation. After Geroges Mugneret’s passing in 1988, his wife Jacqueline and two daughters assumed all the operational responsibilities for the domaine. Their two daughters, Marie-Christine and Marie-Andrée (also known as the “Mugneret Sisters”) both head the estate today. It seems that history will repeat itself as the estate will be passed down from mothers to daughters because both Marie-Christine and Marie-Andrée also have two daughters each.

In spite of their small production, they are in great demand because Mugneret offers such a subtle yet potent impression of Burgundy’s most hallowed terroirs. Over 8 hectares (nearly 20 acres) with 9 different appellations are cultivated in this domaine, producing from 20,000 to 30,000 bottles annually.

They have the second largest share of the Grand Cru vineyard, Ruchottes-Chambertin, after Domaine Armand Rousseau. Mugneret owns 0.62 hectares out of the 3.30 hectares shared between 8 different domaines. For those who have not heard of this vineyard, it’s tiny and expensive, but its 3 superlative producers (Domaine Armand Rousseau, Mugneret-Gibourg and Roumier) are among Burgundy’s best. 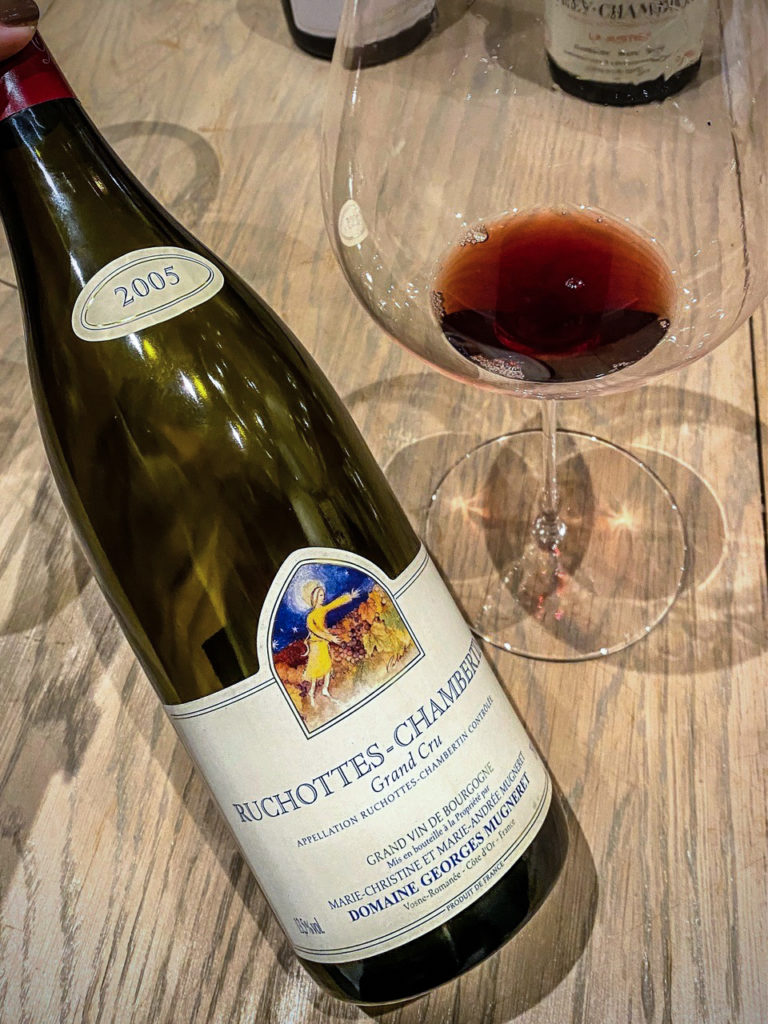 2005 is the best Burgundy vintage of its decade. While the weather was moderately hot and dry, it was not torrid. It isn’t a hyperbole to say that wine lovers would mortgage their homes for this amazing vintage. The Ruchottes-Chambertin delivers aromas of blackberries and truffles, and some spicy and floral notes. The mouth is rich, fresh and dense. The minerality, spicy and floral notes come through in the middle. The finish is remarkably persistent and it lingers.

We brought the bottle to a wine-tasting dinner to share with the like-minded. “The great Henri Jayer once said of [Ruchottes Chambertin], a Chambertin raised in Vosne.” He must have meant that this wine exhibits elegance and power. From it, you can discern the terroir of both Vosne-Romanée and Gevrey Chambertin.

Mugneret Burgundy is Burgundian to the core. It is a pleasure to drink and a treasure to cellar. Enmeshing licorice and cassis fragrance, Ruchottes-Chambertin is floral and profound at once. It is a gorgeous wine that epitomises the Mugnerets’ elegance. Apart from the Grand Cru and Premier Cru wines, the domaine makes a great “village” wine. To many wine aficionados, this is the level where they are most interested in. Very often, village wines are bang for your buck. It is a favourite hunting ground for bargains due to the slightly higher yield.

Compared to other village wines, however, these wines aren’t that inexpensive simply because they originate from a very much sought-after producer in Vosne-Romanée. If you could purchase this wine directly from the importer, it might cost around RM500 a bottle. Otherwise, be prepared to pay between RM1,000 and RM1,200.

The village Vosne-Romanée is a blend from half-a-dozen different lieux-dits of which the most significant volume comes from La Colombière located just outside the domaine’s back door and Champs Boudin, just below. However, starting from 2018, the vines from La Colombière have been made apart.

I find village wines very approachable and especially so for beginners because certain characteristics and styles are ascribed to the wines of different villages. For example, wines from Savigny can be meaty, those from Volnay exude elegance and those from Vosne-Romanée bring out the spice. This village wine is fragrant, seductive and typical of village Vosne-Romanée.

We had the wine decanted for an hour or two before it was served. Dark-ruby red in the glass, the wine exhibits notes of spice, violet and cassis, offering a hint of chocolate. The wine has very concentrated flavours. It is full-bodied and voluptuous but also displaying freshness and pleasant tannins. I thought the wine would be too young but it opened up beautifully. It pairs very well with any poultry and wild birds.

This domaine makes one of Burgundy’s most coveted, highly rated and most expensive wines. The story begins in 1924 by Georges Roumier who started domaine bottling in 1945. He was succeeded by his son Jean-Marie in 1957 and now, Christophe Roumier, son of Jean-Marie has taken over the estate effectively since 1992.

Instead of acquiring plots outright, Roumier used the French sharecropping/lease system of métayage, whereby an individual cultivates the land for the owner in exchange for a proportion of the produce. Most of the wines are en fermage (rented) from family members.

Five Burgundy Grands Crus are produced in Georges Roumier estate: Bonnes Mares, Musigny, Charmes Chambertin, Ruchottes Chambertin, and Corton Charlemagne in white. A rarity among these grandest wines is the Musigny. He only has 0.1 hectares of this Grand Cru jewel where a scarce single barrel is produced each year. I am truly fortunate to be able to purchase a bottle of this gem every year.

Christophe Roumier’s wines are known to be seductively fruity in their youth with an excellent ageing potential. After he took over the estate, he propelled the domaine to an even greater height because he has a knack for churning out amazing wines in certain less-favoured vintages. Chambolle-Musigny is one of the three preferred villages of the Côte. Some say it is the Volnay of the north because of the wine’s characteristics, which combine elegance with intensity. Wines from this region might not be the richest in terms of colour, nor the most structured, but they deliver a fruit-forward and lacy texture to appease wine lovers.

Historically, the parcel Les Cras wasn’t considered as one of the top Premier cru vineyards of Chambolle. Today, the demand for this wine has increased exponentially. The domaine has 1.76 hectares of 3.45 hectares of vines, thus making it the largest producer of this parcel among two others. One aspect that bodes well is that grapes here ripen better than ever. This development could be due to global warming. This results in a wine that is racy and mineral.

The vintage 2014 can be described as having a great start in the growing season, a lousy middle where a large hailstorm battered the vineyards from Meursault and all the way to Chambolle, and a favourable harvest condition for the grapes.

Despite many preferring the 2015 vintage, I like 2014 because the reds are fruit-driven and fresh. It possesses a solid tannic spine with moderate acidity. I love the aroma of black and red berries intertwining with musk, smoke and minerals. It has a beautiful bouquet with a medium-weight body that results in a saline and bewitching finish. I don’t expect anything less from this producer as he makes great wine even in lesser vintages. The drinking window for this wine is immediate, but I believe that it can still take on some years. While the former is a Premier Cru wine, this one is an equally sought-after village wine. A bottle of this Chambolle-Musigny village wine from Roumier will set you back almost the same price as the Vosne-Romanée from Mugneret-Gibourg. It is scarcely believable that one would have to fork out so much for a bottle of village wine and yet it is so highly demanded.

I agree that prices of Burgundy wines have gone a little nonsensical. More and more wine lovers are starting to take notice of the crown jewels on the Côte. The reduced yield in these past few years due to bad harvest is affecting availability and further driving up prices.

Pale red with a purplish hue, the 2014 Chambolle-Musigny Village has a refined bouquet with hints of strawberries, rose petals, sous bois and licorice. Fruit notes are concentrated but the wine has fine minerality coming through. On the palate, it is fresh, medium-bodied with fine tannins. It is a very elegant, seductive and enticing wine. I will not hesitate to drink more bottles of this vintage now. I remembered that we drank this bottle with some escargots de Bourgogne and a Coq au Vin. One couldn’t be more French than this. The year 2010 was one of the most surprising vintages since 1991 because of the difficult growing season. The problem began even before the growing season due to the preceding fall and warm winter. However, the wines turned out better than anyone had expected. The vintage was considered a success because of the natural low yields, which enabled high levels of sugar and phenolic ripeness. Despite low average temperatures and cloudy conditions, luminosity was excellent. The latter’s contribution to the maturation of Pinot Noir in Burgundy is often overlooked.

The wine has a bright, deep red colour with an ultra-fresh, cool and presumed nose. It has a bouquet of berries like cherries, raspberries, cassis and blackberries. The tannins are modest, silky and caressing. On the palate, the wine is fresh, crisp and lush. It makes you want to take a sip after sip. As pointed out by Wine Spectator, this wine is best from 2016 through to 2027 – a very classic Chambolle indeed.

As I’m rounding up this article, Luc and I are in the midst of packing for our second pilgrimage to Burgundy this year. It’s very cold now and temperatures are near freezing. With Covid-19 still persisting in Europe, we hope that frost and strict measures will not hamper our trip. We look forward to meeting some producers and tasting some of the great wines from the 2020 vintages at the wineries.

Get yourself some wines rated 90 points and above now

Book your hotel in Burgundy here

Hero and feature images by Stefan Schauberger on Unsplash. All other images by Eiling Lim unless stated otherwise