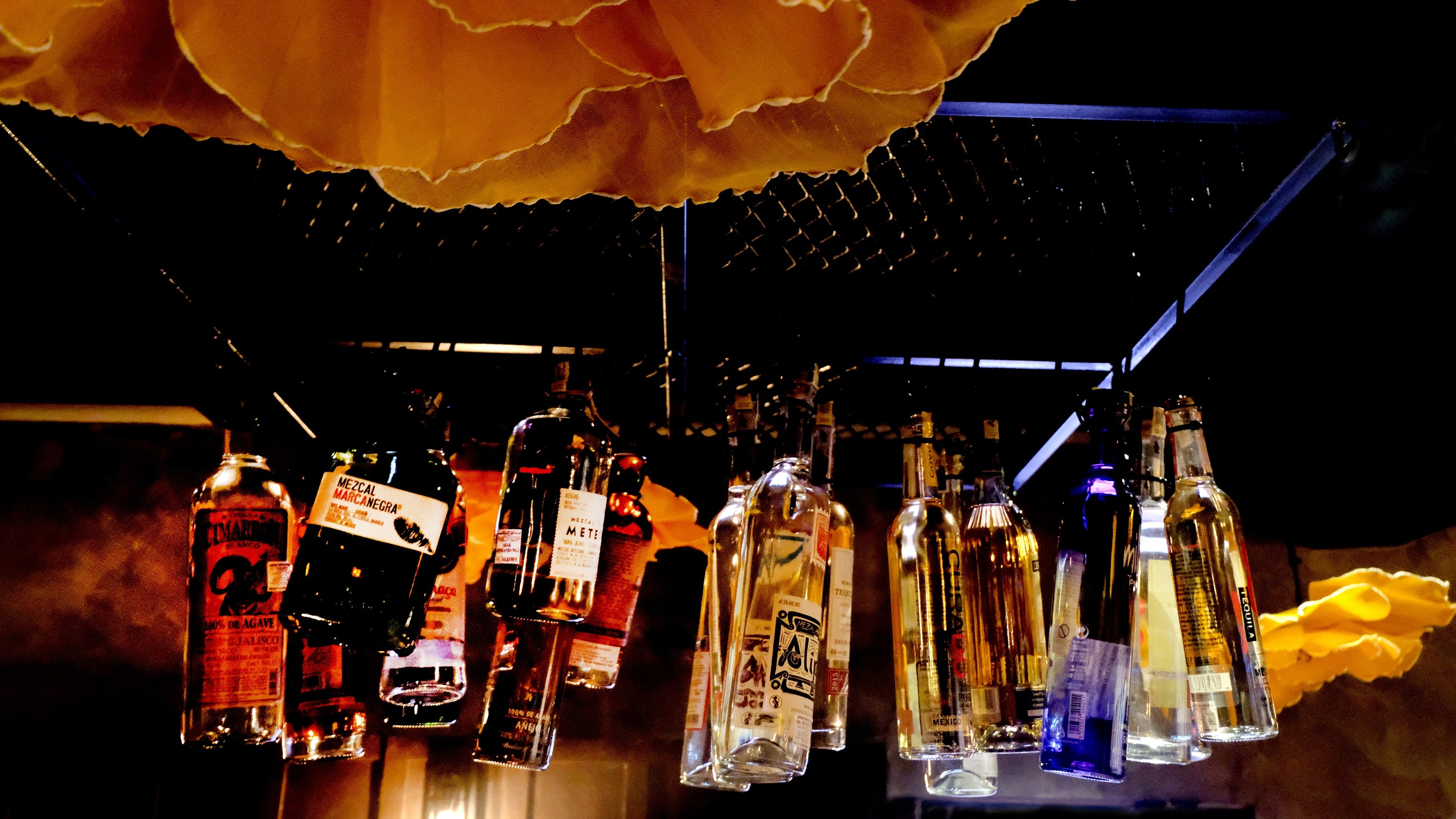 The decade is the 70s, and the setting is at your local cinema. You purchase your stub tickets at the counter for your movie of choice and then enter through the heavy velvet curtains to enjoy the show.

Fast forward to 2019 with the same setting, except instead of entering a movie theatre, you’re entering Tickets KL – one of the newest bars to grace the F&B playground that is Republik Damansara Heights.

Tickets KL is brought to you by the same people who gave you KL’s first Chinese-themed bar PS150, as well as the impossibly Instagrammable brunch place Tapestry. We recently snuck in through the curtains to have a look at what this new watering hole will be contributing to our city – read on for our review.

Certain parts of PS150 can be felt, especially on the theatrical entrance and the cosy couple booths in the first segment of the bar. But that’s where the similarities end. Tickets KL is very much its own space, modelled after an old movie theatre.

The seating area is set in levels, not unlike what you’d get inside a cinema. The theatrics in the bar isn’t from any extraordinary performances, but the showmanship of a bartender preparing your cocktails. Now that’s something we can get behind on.

Behind the bar counter is the iconic part of the room – a pair of eyes staring back at you. It’s in fact, a lucha libre – professional Mexican wrestling. Evidently, this pays homage to the agave theme that the bar is currently undertaking. Other Mexican touches that can be seen around the bar include sugar skulls dotting the room, and if you look up, marigolds adorn the ceiling. Marigolds are an important component of the Day of the Dead in Mexican culture – these flowers apparently guide the spirit of the dead to its altar with their vibrant colours and pungent scents.

Most people will tell you that Tickets KL is an agave-focused bar. They’re not wrong. It is, for now, the only agave bar in the city serving up cocktails focusing on spirits such as tequila and mezcal. But similar to how movies in a cinema come and go, so does the alcohol theme at Tickets. According to owner Tan Boon Wy, in another nine months or so, he plans to change the bar programme. As for what Tickets may turn into later, we’ll just have to wait and see.

But of course, we’ll focus on the now.

The current cocktail menu is segregated into three categories: Signatures, Modern Classics, and Sans Agave. Signatures is tequila and mezcal-based creative cocktails by the bar, while Modern Classics are easy to understand: classic agave cocktails such as the Margarita and Paloma, given a modern iteration. You’ll find the 21st Century cocktail too, a modern update of the classic 20th Century cocktail. Under Sans Agave you’ll find some cocktails with local elements in it, like the Piranhas in Johor made with pandan and spiced pineapple, or El Chapo’s Cha with lapsang souchong tea in it.

We had one from each category, starting with the Paloma from the Modern Classics menu. The tequila-based Paloma has all the makings of a good aperitif – it’s light, mouthwateringly citrusy, and whets the appetite. Using Ocho Blanco, lime, and grapefruit soda, the acidity of the drink makes it an easy one to go down. The best part is that you can have several glasses of these and won’t even feel it.

Next, we go a strength higher with the Mezcal Fix. Don’t be fooled by how pretty this drink looks, because it belies the complexity that you’ll savour from it. Dressed in a champagne flute, there’s a lot of work put into making this cocktail – an entire pineapple needs to be roasted for this drink, but it only yields three glasses. The drink is as sweet and refreshing as a glass of juice, but it has a solid body and complex flavour profile thanks to the roasted pineapple.

The smoky aftertaste is significant and interesting, cutting through what would otherwise be a saccharine drink. But make no mistake – this isn’t a drink that’s just reserved for girls. It may be presented in a dainty glassware and is sweet, but it packs a good punch of Meteoro Joven mezcal.

Our third drink for the night also happens to be the most full-bodied one – an omakase cocktail, crafted out of your preferred flavour profiles. We wanted something bitter and strong-bodied, and so something off-menu – the Mezcal Martinez – was made for us. The original Martinez classic cocktail is a hybrid of the Martini and Manhattan, and this version swaps out gin for smoky mezcal.

The resulting cocktail is full-bodied, bitter, and smoky – perfect for those who love its selection of bitter cocktails. It’s the perfect digestif to end the night with, provided you don’t have to drive yourself home, that is.

Other than the cocktails, one noteworthy thing about the menu is the flights. The flights are the best way for you to give premium tequila the appreciation it deserves. For too long, the agave spirit has been a victim to college drunkards downing shots after shots of the bile-inducing stuff.

In fact, premium tequila is worth sipping to and appreciating its many layers of flavour profiles – not unlike a dram of whisky. There are several tequila flights you can pick from, including a cachaca flight. Cachaca is a Brazilian spirit made of fermented sugarcane juice  – not quite an agave, but worth trying out too.

In between these flights, you’ll be served some palate cleansers: Sangrita or Verdita. These are classically Mexican palate cleansers specifically to have in between shooting tequila neat. They’re made with a concoction of habanero peppers and herbs, designed to cleanse the palate and highlight the crispness of tequila in between shots. You’ll feel like you’re in Mexico itself with all the heat.

Agave spirits are making its mark internationally, but Malaysia is still slow to catch on the trend. With the launch of this agave programme at Tickets KL, we’re hoping that more bars will follow suit and introduce a wider variety of premium tequila and mezcal-based cocktails, especially since this isn’t going to be the norm at Tickets.

But for now, you have nine months to get your agave fix. Even if you’re not a fan of these spirits, visit anyway for the ambience and order yourself a non-agave-based cocktail. Tickets won’t judge – just here to put on a show for you.

agave spirits kl bar review tickets kl
PohNee Chin
Editor, Kuala Lumpur
Poh Nee is the editor and writes about travel and drinks. When she's not living out her holiday dreams via Google Earth and sipping on an Old Fashioned down at the local bars, you can find her snug at home bingeing on Netflix and mystery fiction.
Travel Drinks

The Conditional Reviews: Low-proof cocktails by Coley on delivery

The Conditional Reviews: Dining out at Nadodi KL during the CMCO