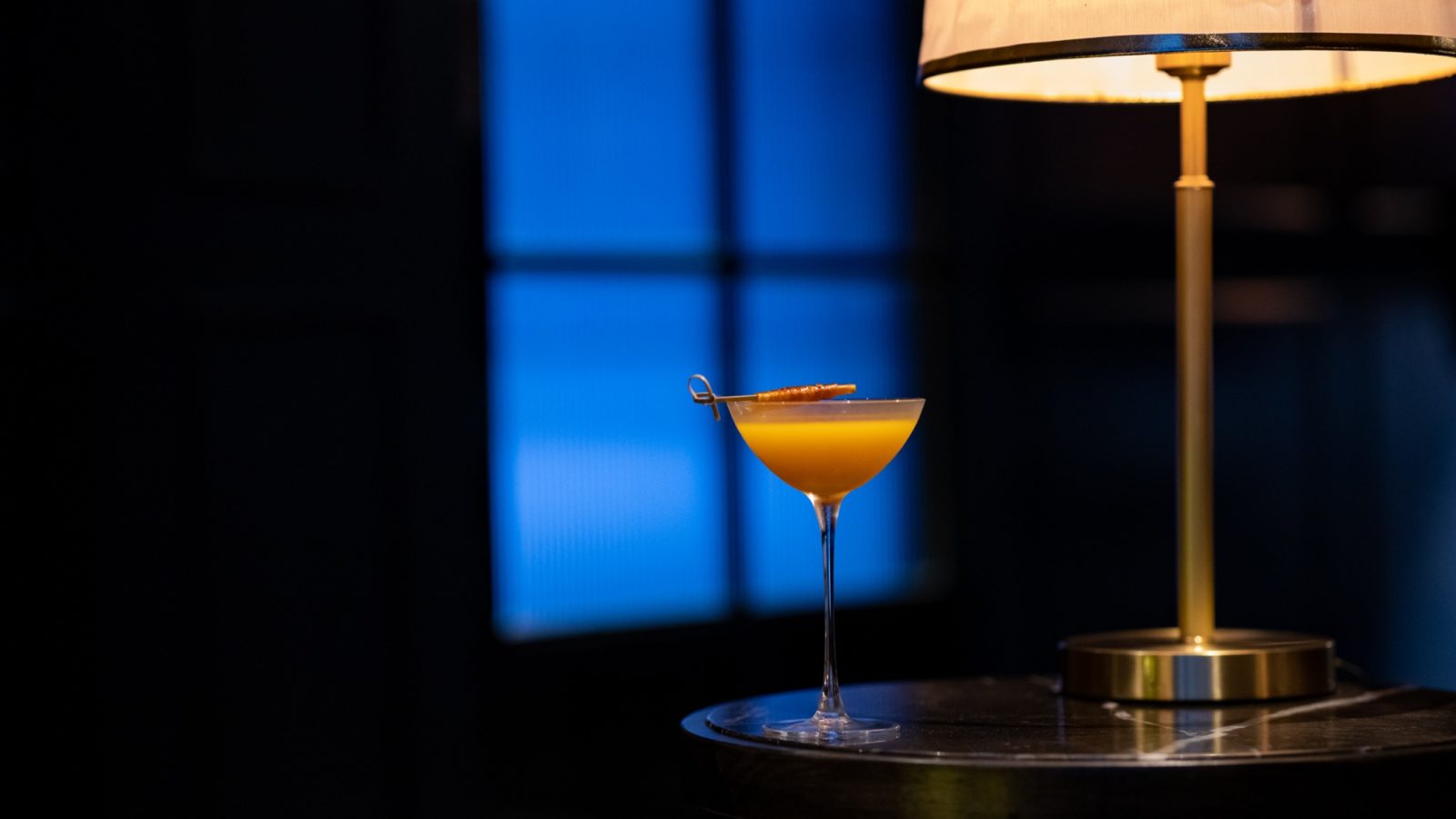 Food & Drink
Review: Frank’s Bar is a tribute to Ol’ Blue Eyes with a penchant for blending music and drinks
Share this article
Next article

One of the cocktails in Frank’s Bar KL is in fact, a barrel-aged drink aged to the soothing tunes of Frank Sinatra.

He may have drunk his share of martinis back in the day, but Frank Sinatra’s favourite cocktail was a deceptively simple Jack Daniels and still water over four cubes of ice. That certainly didn’t stop Frank’s Bar from curating a long list of cocktails inspired by the singer though. The newest watering hole in KL can be found in Avenue K Shopping Mall if you look hard enough. Hidden behind new Italian restaurant Natalina, this bar was designed to be a tribute to Frank Sinatra, from the interior to its drinks menu, inspired by his music.

Helming the bar is Giovanni Andrea Magliaro, the brains and muscle behind the cocktail menu. Magliaro has concocted a fair number of craft cocktails at Frank’s Bar, but a little birdy told us that some of the best classic cocktails in the city could be found right here, if only Magliaro was the one who prepared it for you.

If there was one word to describe Frank’s Bar’s interior, it would be ‘handsome’. With deep burgundy chesterfield sofas amidst black marble coffee tables and heavy drapes, this bar is certainly one that the Rat Pack will approve of.

The signature craft cocktails, as we discovered, tended towards the sweeter end of the taste spectrum. Those looking for an afternoon tipple should start with the Basil Trumpet, a light effervescent cocktail with savoury aromas of basil thanks to the housemade basil shrub, a variant of drinking vinegar that’s increasingly popular as cocktail mixers. The drink itself has a sharp mouthfeel and is vermouth-forward with a touch of gin. Served highball style, it’s fizzy and the perfect first drink to unwind with after a long day.

Continuing on a refreshing streak is the Tropical Swing, which is an invigorating take on the pina colada, minus the creamy coconut. Yet, when we took a sip, we could still enjoy the creamy mouthfeel thanks to the foamy top. The cocktail errs on the sweeter side, perfect for those who aren’t fans of spirit-forward drinks.

Magliaro has also tapped into some molecular gastronomy – we use this term lightly so don’t even @ us – for a drink that will look great on the ‘gram. Ramen Beats came served to us in a bowl of soup complete with chopsticks. Within it was a single block of ice and what looked like ramen noodles. However, instead of a savoury drink, our senses were taken aback by the sweetness of this cocktail. The ‘noodles’ were, in fact, white chocolate agar, while the cocktail was a concoction of gin and sake, plum liqueur, and sakura flower tea syrup. What’s interesting is the texture and mouthfeel of the cocktail itself is thick, almost soup-like.

Another drink perfect for social media is The Artist’s Mind. Ready your Boomerangs and videos, because this one is all about the timing. Served in a glass shaped like a torso with the head serving as the cup, the cocktail comes with a smoke-filled bubble atop the head. Burst its bubble et voila — the money shot. Magliaro calls this his twist on the classic Penicillin cocktail, and I enjoyed the spiciness of the ginger in the aftertaste of this whisky-based cocktail. The lapsang syrup also lends a smokiness to the full-bodied cocktail, which I rather enjoyed.

A personal favourite of mine had to be the Floral Lah, a saffron-infused vodka-based cocktail with the perfect balance of sweet and sour with a slight dryness — a nice change from the previous saccharine cocktails we had. The green apple sour syrup perfectly permeated the cocktail without being too bitter or sour, and the lavender kombucha lent a nice herbaceous aftertaste to the drink.

‘The Best Is Yet To Come’

The star of the night, however, went to the music-aged cocktail, or as Frank’s Bar calls it, ‘sonic-ageing’. In a barrel, Drowned In Sound is a product of the bar’s philosophy and its namesake: music. This new ageing method utilises soundwaves to speed up the alcohol ageing process, interacting with the liquid within. Using a carefully curated ‘Signature Sinatra Mix’ playlist, headphones are placed over the cocktail barrel and the music is played for four hours a day between 110 and 200bpm, for over 14 days.

When comparing the unaged version and the sonic-aged version, the latter has a more mellow flavour compared to its unaged counterpart, which has a sharper mouthfeel. The spirit-forward cocktail has all the makings of a delicious drink: Michter’s bourbon & rye whiskey blend, Campari, Mancino Rosso Amaranto vermouth, and orange and chocolate bitters. It’s a full-bodied cocktail with a bittersweet flavour profile and an oaky aroma that tends to linger long after you’ve sipped. Drink with caution, and make this drink your final one.

Signature cocktails aside, we wanted to go beyond the menu to also see Frank’s Bar’s prowess in classic cocktails. The Vesper Martini fared exceptionally well, with a perfect balance of sweetness balancing out the dryness of gin and overall boozy profile of the cocktail.

Go for the drinks and stay for the music. After having a hearty Italian meal at Natalina, the best way to end the night is to head over to Frank’s Bar for some drinks and good music. The Rat Pack will approve.

Frank’s Bar is managed by the Cinnamon Group, who’s also responsible for other excellent restaurants in the city including Nadodi, Kikubari, Aliyaa, The Sticky Wicket, and more.

Frank's Bar
Address
Unit 06 Level 03, Avenue K, 156, Jalan Ampang, 50450 Kuala Lumpur
Website
Instagram
Phone
+6012-674 4860
Bars in KL bar review frank's bar
PohNee Chin
Editor, Kuala Lumpur
Poh Nee is the editor and writes about travel and drinks. When she's not living out her holiday dreams via Google Earth and sipping on an Old Fashioned down at the local bars, you can find her snug at home bingeing on Netflix and mystery fiction.
Travel Drinks

Skillet@163 welcomes the deep, earthy flavours of autumn in its latest menu