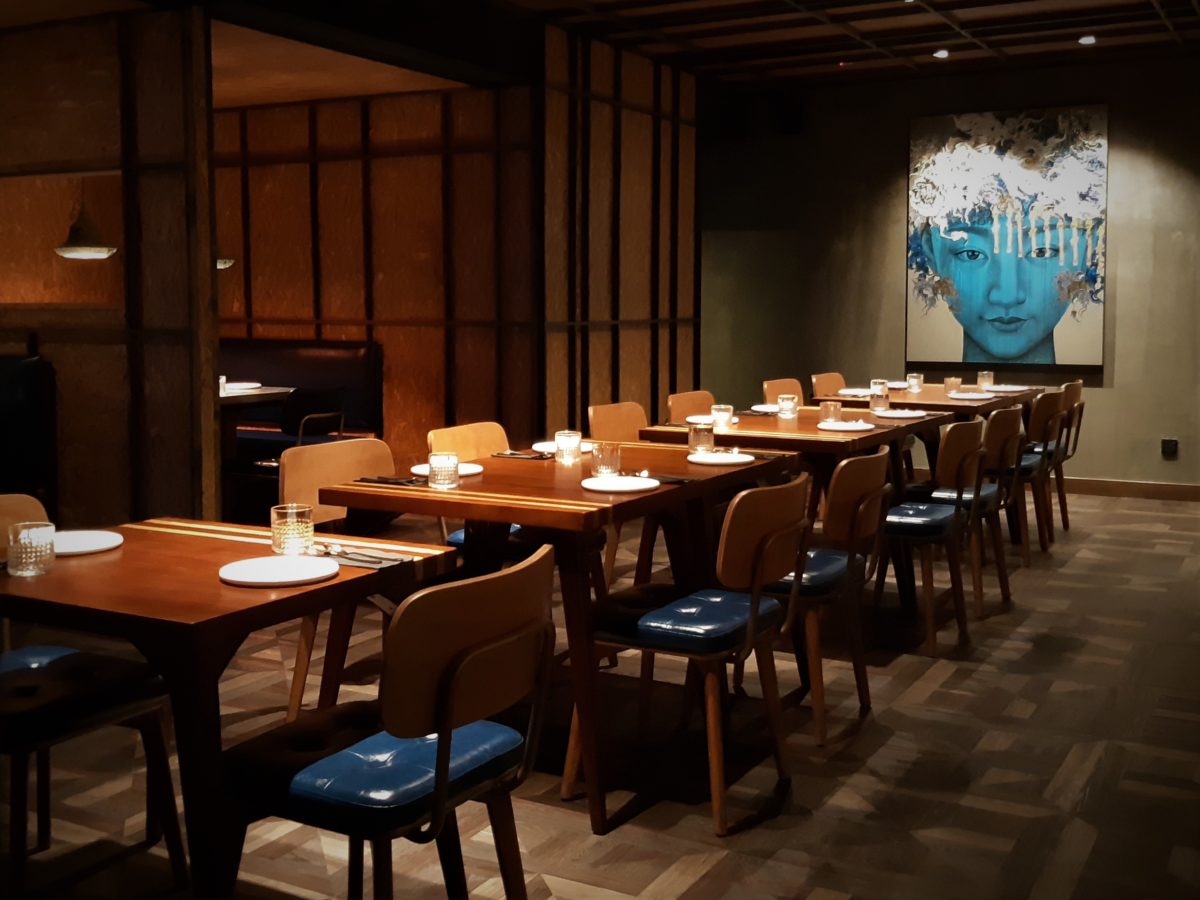 Krung Thep opens a noodle bar that will offer you a quick fix of Thai staples right from the wok.

A blue tint veils the entrance as you walk into Krung Thep, a quasi-new Thai restaurant that opened at The Republik in Damansara Heights alongside Frangipaani, Blonde, Tickets Bar and Playte. The mood is akin to eating street food at a hidden alley in Bangkok — a dim atmosphere with the only light source coming from the kitchen.

From stir-fries to simmers, the new noodle bar concept that kicked off earlier this year offers the lunch crowd something quick yet comforting for the palate. Think quintessential Pad Thai and Pad See Ew, to a more filling Gung Orb Woon Sen — claypot glass noodles with baked sea prawns.

Regular patrons who’ve been to Krung Thep during dinner service will also find some similar sharing items in the Small Plates section that are also served during lunch — making it an exciting dining affair for both day and night.

There are currently eight main dishes in the Noodles section to choose from, with two vegetarian options for those who cannot consume meat. Wun Sen Pat Dtao Huu Yui (stir-fried glass noodles with beancurd and mushroom) is easily a crowd-pleasing dish that’s in the same rank as the classic Pad See Ew Veggie (rice noodles tossed with oyster mushroom, local greens and soy sauce) — both enveloped in a good amount of wok hei and perfect for those who aren’t a big fan of spicy food.

Kao Soi Gai, on the other hand, is the spiciest of the lot. The dish, comprising rice noodles and mustard greens imported from Chiang Mai is served with a hearty and fragrant Northern Thai chicken curry perfumed with a bounty of spices that lingers in the palate for a while — leaving you wanting for more. If it’s not spicy enough, you can opt to fire up the mix with its homemade crispy shallot chilli that gives an extra kick. For texture, there are two types of rice noodles offered in the dish — one that’s silken and smooth, paired with crispy deep-fried ones for crunch.

Another must-try is definitely the Pad Thai that’s reimagined in the chef’s own special way. Krung Thep’s version is brighter, less sweet and loaded with wok hei. It is also stir-fried with starfruit for an extra burst of citrus and zests to the dish. If you’re an ardent fan of Pad Thai, you’ll find the one here slightly stronger in taste thanks to the use of duck egg.

We also love the Guns Orb Woon Sen, a glass noodle dish cooked in a claypot with sea prawns and green chilli sauce. Perfectly cooked glass noodles are deliciously wrapped in a peppery sauce and sweetness from the seafood. You can also enhance the flavours with a side of chilli sauce if you want an extra kick.

Travel
Food & Drink
Where to find the best halal restaurants in Bangkok
Travel
Check in: Bangkok Marriott Marquis Queen’s Park is a respite for business and leisure

When it comes to sharing plates, Krung Thep ensures that each of these items in the menu is curated to complement the main noodle dishes. Ranging from deep-fried snacks to omelettes and salads, there’s something for everyone to sample here.

Our attention goes right to the Kai Ceiw Pu, duck egg omelette with crabmeat and sriracha sauce. It is creamier and more decadent than a regular omelette with delicious chunks of crabmeat for extra natural sweetness. The sides are crispy, adding great flavour to enjoy with the noodles.

Adventurous foodies should also try the Kreng Nai Gai Tot Song Kreng. Like the Indian pakora (deep-fried vegetables or onion fritters), the Krung Thep’s signature dish has a touch of Thai spices with chicken hearts and gizzards as its main ingredient. It may sound vile at first but the taste is delightful and absolutely addictive.

We especially enjoy the Yum Tua Plu, a wing bean salad with sea prawns and chilli jam, tossed in a coconut milk dressing, and topped with an onsen egg. You might expect a kind of crisp from the wing bean, like eating ulam, but the texture here is slightly soft as the veggies have been lightly blanched to rid the tannins and bitterness. When mixed together, the dish is delicate yet folded with creaminess from the coconut milk and a hint of spice to elevate your appetite.

If you are the kind who needs something warm and comforting in your repertoire, the Tom Yam Pla Gra Pong Daeng doesn’t disappoint. Unlike the usual fiery tom yam that’s packed with chilli and spices, the soup base for this dish is enhanced with tamarind — leaving a light sour note that complements the fresh bouquet of herbs and turmeric. It is served with tender slices of snapper, leaving you with spoonfuls of delicious soup to enjoy with your meal.

Dining
Food & Drink
Beyond matcha, here’s where you can find the best tea desserts in KL
Food & Drink
6 best home bakers in KL to get customised cakes

For A Sweet Tooth

Thai desserts are a must-have, especially if you have a sweet tooth. Krung Thep offers traditionally classic desserts with its own special twist. Its Tub Tim Krob, for instance, is served with coconut ice cream instead of the soupy version with coconut milk. Similarly, Gluay Bing which is a grilled banana dessert is also served with vanilla ice cream instead of coconut cream. Chef Gug also uses locally sourced pisang tanduk as well for a firmer texture, and serves it with palm sugar and turmeric syrup — a must-try when at the restaurant.

There’s also Cha Yen if you want something light — a dessert of Thai milk tea ice cream with fried mushroom and croutons. But for a fuller course, you’ll want to opt for the mango sticky rice, Khao Niaow Dam Ma Muang. It uses black glutinous rice instead for texture — the rice has a nice chewiness — served with sweet ripe mango and coconut milk for extra oomph. Unlike the ones you get in Thailand, this version is less sweet yet laced with rich flavours from the fruits.

Krung Thep definitely surprises in multiple ways. The interiors are enigmatic yet cosy at the same time despite its dark ambience. From the kitchen, Chef Gug continues to impress diners with his take on Thai cooking that’s infused with his northern Thai heritage where flavours are more intense. The use of unconventional ingredients like chicken hearts and onsen eggs in its Thai repertoire has certainly raked in some extra points. For the lunch crowd, the brand new noodle bar is your reason to grab a few friends to enjoy a meal at Krung Thep.

All images courtesy of Krung Thep

Where to Eat in KL KL restaurants best thai restaurants republik damansara heights Krung Thep
Martin Teo
Content Editor
Martin loves traveling the world to see ancient ruins and classical architecture. He enjoys the culinary experience of various cities but (still) refuses to eat anything insect-like. On a daily basis, he finds time hitting the gym to compensate for the amount of food he needs to eat just to write an article.
Dining Living Culture Travel Style Home

Living
These soothing podcasts will help calm your background anxiety
Style
Alexander McQueen’s Instachallenges helps us get creative indoors
Beauty & Grooming
Kiehl’s brings its iconic in-store consultations online, thanks to Coronavirus
Gear
Pay a visit to the Porsche Museum without leaving the confines of your home
Gear
Try these secure and encrypted video conferencing apps instead of Zoom
Style
Bremont releases a new watch as tribute to mountaineer Nirmal Purja
Food & Drink
A guide to oysters and how to appreciate them
Living
Make staying at home better with these luxury bedding brands
Food & Drink
These easy 3-ingredient breakfast recipes will kick start your day well
Sign up for our newsletters to have the latest stories delivered straight to your inbox every week.