Home > Gear > Motoring > Bulgari teams up with Fiat to release the B.500 by Bulgari Mai Troppo, a shimmering masterpiece 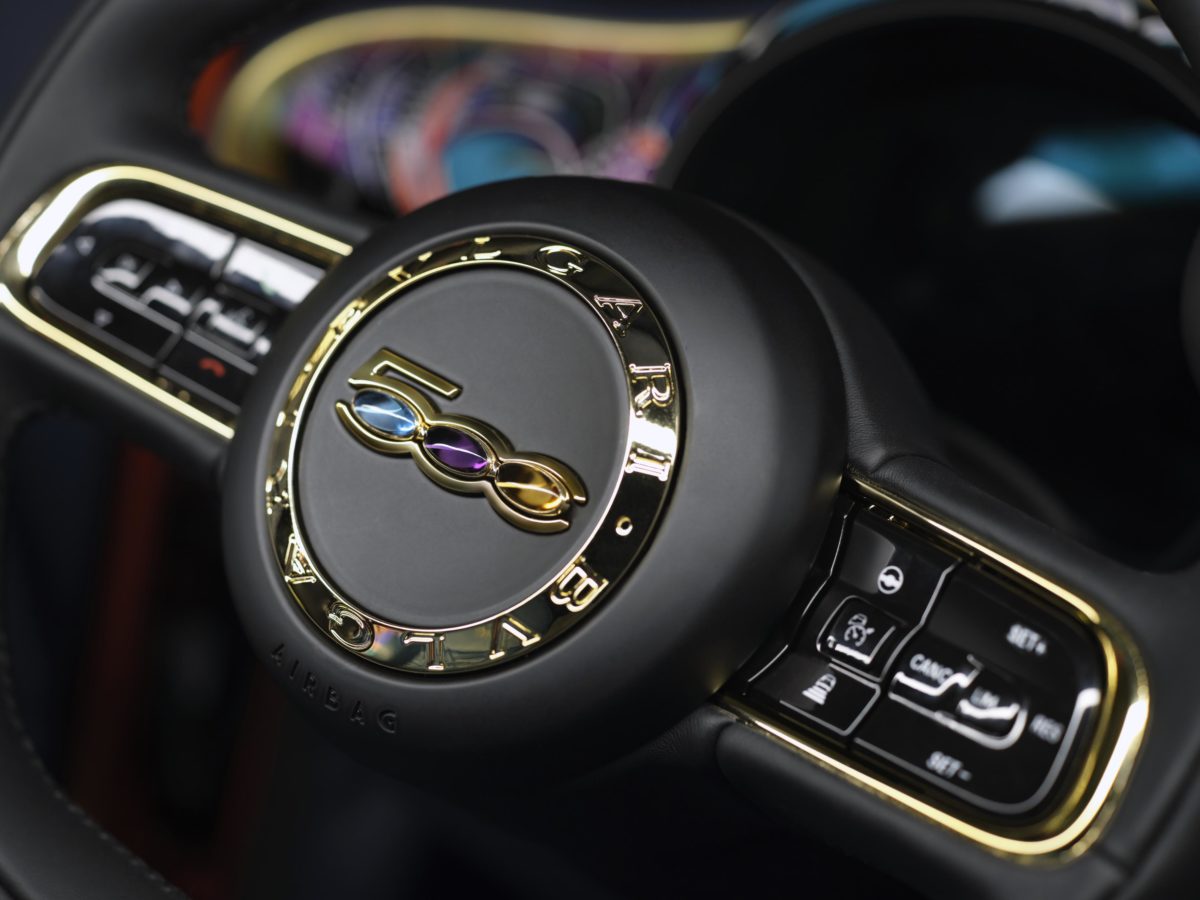 Bulgari teams up with Fiat to release the B.500 by Bulgari Mai Troppo, a shimmering masterpiece

Gear
Bulgari teams up with Fiat to release the B.500 by Bulgari Mai Troppo, a shimmering masterpiece
Share this article
Next article

Bulgari is releasing a new jewel, and it’s not the decorative kind.

This year, Bulgari is working together with Fiat to release the New B.500 by Bulgari Mai Troppo – the first-ever electric model of the Fiat New 500 series that comes as a convertible. As you can probably imagine, the vehicle itself is fabulous, brimming with Italian creativity and luxury.

The first telltale sign of this luxury is the colour itself: Imperial Saffron, a shade that’s iconic to the jewellery brand and created using an integration of special gold dust, leftover fragments from Bulgari’s manufacturing process from its production site in Valenza. It’s a brilliant colour that shimmers under the sun – almost like a jewel. The grille, on the other hand, was inspired by the brand’s jewellery motif Parentesi, while the wheel rims paid homage to Bulgari’s eight-pointed star.

Then, we explore the interiors of the car. The B.500 by Bulgari Mai Troppo’s dashboard is one-of-a-kind, wrapped in colourful silk and hand-painted with the brand’s iconic motifs. Seats are made of octane leather, finished with a shade-on-shade embroidery.

On the steering wheel, a diamond-set logo embellished with a valuable combination precious stones: amethyst, citrine, and topaz. It can be detached and worn as a brooch, just in case you don’t feel like leaving it in the vehicle. And because we’re talking about a Bulgari-made vehicle here, the B.500 by Bulgari Mai Troppo comes with a tailor-made jewellery case and a hatbox in white calf leather skin and colourful leather frames – just in case you want to change your jewellery piece for the night.

Finally, the icing on the cake is the key itself. Sparing no expenses, the key itself is wearable, like a jewellery piece. Crafted in gold, there is an ancient coin set at its core to celebrate the brand’s Monete collection, while the sides flaunt an openwork game with Bulgari’s logo.

This isn’t the first time the Italian high jewellery brand has collaborated with Fiat on its 500 series. Back in 2017, Bulgari celebrated the Fiat 500’s 60th anniversary by letting the vehicle carry the jewellery pieces as part of the brand’s Roman Holiday campaign.

For now, the New B.500 by Bulgari Mai Troppo will only have three units made and will be auctioned in July 2020.

Bulgari Bvlgari Fiat fiat 500
You might also like ...
Style
Bvlgari breaks all rules with the audacious B.zero1 ROCK
Style
Malaysian watch brand Ming snags a win at 2019 Grand Prix D’Horlogerie De Genève
Culture
Bvlgari Pavilion KL becomes the first store in Malaysia to win the Prix Versailles award
Culture
These are some of the best movies by women directors to watch
PohNee Chin
Editor, Kuala Lumpur
Poh Nee is the editor and writes about travel and drinks. When she's not living out her holiday dreams via Google Earth and sipping on an Old Fashioned down at the local bars, you can find her snug at home bingeing on Netflix and mystery fiction.
Travel Drinks