The name Porsche is synonymous with luxury, class, and raw power. Over the years, it has become a powerhouse when it comes to its supercars, particularly the Porsche 911 series. Ranging from the 911 GT3 to the 911 Turbo, the 911 is arguably Porsche’s most famous car to date. Even the Porsche 911 GT2 RS model is based off the 911 Turbo, dating back to the 993-generation.

With Porsche placing emphasis on many of its SUVs and sedans over the last couple of years, it is a breath of fresh air to feast your eyes on its signature rear-wheel drive lineup.

The first ever Porsche 911 GT2 debuted in 1993 up until 1998. Unfortunately, it entering the market also marked the end of the air-cooled Porsche 911 series. The Porsche 911 993-generation is also known to be one of the oldest Porsches to ever live up to the hype. Housing an air-cooled, twin-turbocharged 3.6-litre flat-six engine, it could develop 424hp. It also had a top speed of 301 km/h and capable of hitting 0-100 km/h in just 3.9 seconds. In 1998, it received an engine upgrade to 444hp before it was discontinued.

While the Porsche 911 GT2 996-generation was first announced back in 1999, it wasn’t until two years later did it see the light of day. The Porsche 996 also focused on primarily being a road car, as opposed to its predecessor. At its core was a water-cooled twin-turbocharged 3.6-litre flat-six engine, putting out 456hp. Naturally, it would trump the previous 996, clocking in at 3.7 seconds when going from 0-100 km/h. It also had a top speed of 319 km/h.

In 2007, the 996-generation was displaced with the Porsche 997 GT2. While its engine was based on the existing 3.6-litre flat-six, it also featured twin variable geometry turbochargers. This allowed the 997 to generate up to 523hp while hitting its stride from 0-100 km/h at only 3.6 seconds. It also had a maximum top speed of 328 km/h, making it the first street legal Porsche to exceed 322 km/h.

After six years of silence, the Porsche 911 GT2 RS 991-generation was finally unveiled last year at the Electronic Entertainment Expo, which is more commonly known as E3. It was revealed at the Xbox presentation of E3 2017 to tie up with the Forza Motorsport 7 video game.

With all previous iterations featuring a 3.6-litre engine, the 991 takes it up a notch with a 3.8-litre twin-turbocharged flat-six. This gives it 690hp and 750 N⋅m, making it the most powerful 911 ever built. It also comes with 7-speed PDK transmission, unlike the previous versions, which were 6-speed manual. This is to handle the sheer torque produced by the engine. The Porsche 911 GT2 RS 991 does 0-100 km/h in just 2.8 seconds.

There is also a Weissach package option, which focuses primarily on carbon fibre and titanium parts. This package reduces its overall weight by 30 kg, leaving it at 1,440 kg. 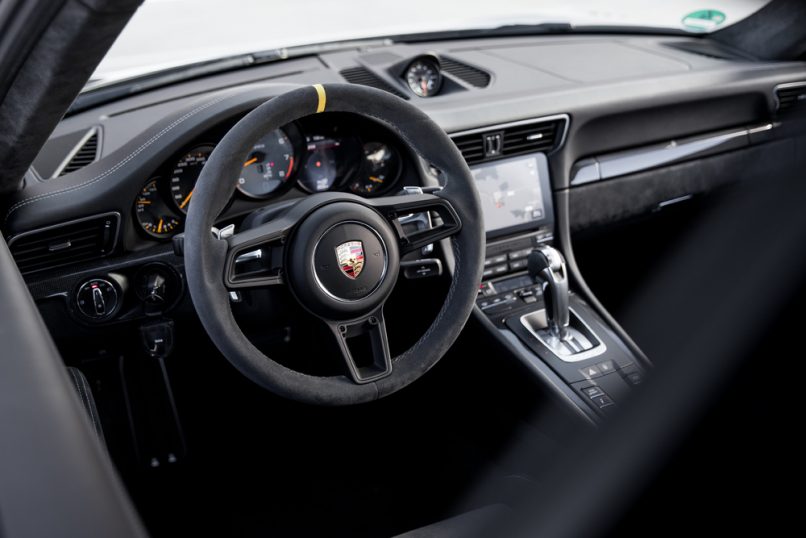 Its interior introduces red Alcantara, black leather with a carbon-weave finish accompanied with full bucket seats. The sports steering wheel houses the gearshift paddles while the Porsche Communication Management (PCM) is the central unit for audio, navigation, and communication. Within it is the Connect Plus module, which will pair with the Porsche Track Precision smartphone app and will include detailed recording, display, and analysis of your driving data.

Porsche Luxury Cars Supercar Porsche 911 Turbo Porsche 911 GT2 RS luxury automobile porsche 997 gt2 rs
Wi-Liam Teh
Senior Writer
Wi-Liam is a geek at heart with a penchant for tattoos. Never without a drink in hand (preferably whisky, gin, or Guinness), he is also a writer by day and a keyboard warrior by night. On his day off, he masquerades as a streetwear and sneakerhead enthusiast while his bank account says otherwise.
Tech Cars Watches Entertainment Food Drinks
Sign up for our newsletters to have the latest stories delivered straight to your inbox every week.