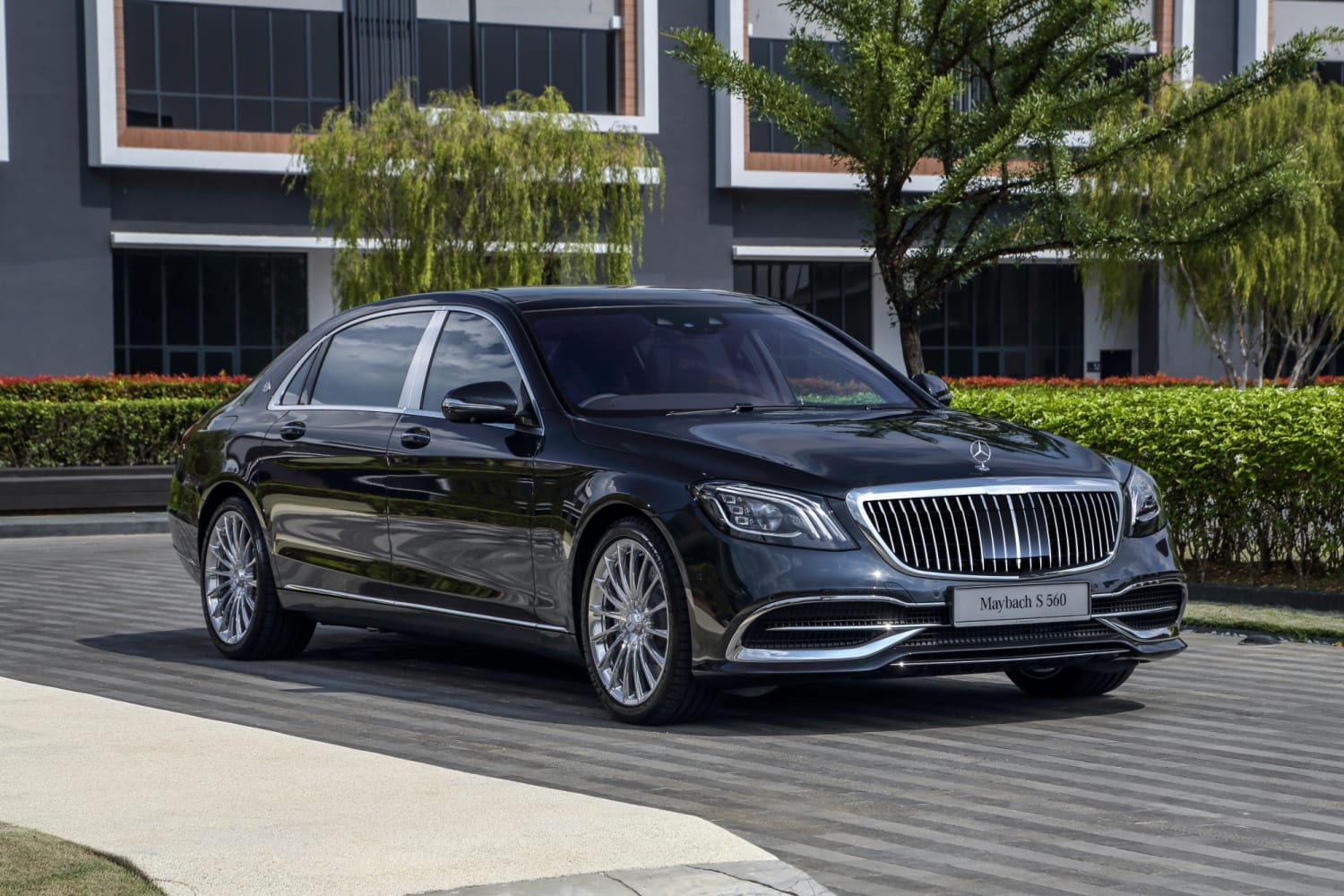 The Mercedes-Benz S-Class makes its way into Malaysia

When the discussion of high-end luxury automakers comes to mind, Mercedes-Benz will always be part of the conversation. As the paradigm of German automotive technology, Mercedes-Benz has done well for itself ever since its inception in 1926. Since 1972, when the Mercedes-Benz S-Class has been introduced to the market, it has become the epitome of Mercedes-Benz, carrying the flagship title for the German automobile marque.

Culture
Mercedes-Benz on an urban hunting journey to ULTRA Singapore

First off the line is the S 450 L AMG, which focuses towards improving Intelligent Drive, Mercedes-Benz autonomous driving feature. The car now comes with Active Distance Control DISTRONIC and Active Steering Assist. These two new features provide greater support and comfort for the driver in keeping a safe distance.

The headlights of the S 450 are Multibeam LED, providing quick and precise adjustments based on current traffic conditions. In-between the headlights is a new radiator grille, a new and prominent feature on the rest of the latest S-Class additions. Outfitted with the AMG Line trim, the S 450 takes over from the previous S 400h.

The interior of the S 450 has two new high-resolution displays, each with a 12.3-inch diagonal screen. Both display screens will be under one shared glass cover to blend into a wide-screen cockpit. The wide-screen cockpit has three different display styles for the driver to choose from — Classic, Sporty, and Progressive. Another outstanding feature is the touch-sensitive Touch Control buttons on the steering wheel. This gifts you the control of the entire infotainment system easily with a simple touch.

The infotainment system can also be controlled via voice control, known as LINGUATRONIC. There are a variety of commands, like controlling the air conditioning, interior lighting, heating, and seat massage function to name a few. The S 450 can also recognise up to 450 individual voice commands.

The S 560 Cabriolet shares many similar features to the S 450. However, one distinctive difference is the use of OLED tail lamps on the S 560. There are a total of 66 ultra-flat OLEDs, emitting similar light patterns in all directions, forming a unique day and night design. The S 560 also features AMG Line and sporting 20-inch AMG 10-spoke wheels.

Aside from its new front and rear bumpers, the two-door drop top carries the signature diamond grille with much larger air inlets and a chrome-plated front splitter. It also shares the same interior with the S 450 with its dual high-resolution 12.3-inch displays. The S 560 also has new trim lines on the interior, featuring a high-gloss brown burr walnut wood, satin-finish grey ash wood, and designo flowing lines magnolia wood.

The infotainment system within the S 560 has with the latest-generation COMAND Online, ushering in a new era of digitisation and connectivity. With Near Field Communication (NFC), it allows your smartphone to transform into a digital vehicle key. The Smartphone Integration package within the S 560 will be compatible with both Apple and Android smartphones. There is also wireless charging capabilities for all mobile devices in the stowage compartment.

The S 560 also features the same driving assistance system as the S 450. The main difference lies in the belly of the beast; the M176 4.0-litre bi-turbo V8 engine that provides 469hp and 700Nm of torque. It’s paired with the 9G-Tronic automatic transmission system with cylinder deactivation technology for further fuel-saving capabilities.

Known as the driver’s car, the S 63 Coupe is another two-seater drop-top that will turn heads from a mile away, thanks to the AMG Panamericana radiator grille. The S 63 Coupe also has a reduced uplift on the front axle, courtesy of the three-dimensional front splitter with aerodynamically shaped high-sheen chrome edge. There is also an updated rear apron with a diffuser insert and redesigned twin-tailpipes of the AMG exhaust system.

Even the interior of the S 63 Coupe creates an air of grandeur, featuring AMG power sports seats with memory function and seat heating. Nappa leather is the main material used with the AMG badges incorporated for good measure. IWC also gets in on the action with an exclusive analogue clock design with a three-dimensional design.

Another throwback to the AMG speciality is the displays: the 12.2-inch TFT wide-screen display reproduces round dials to provide engine and vehicle speed. There are also other options on display such as engine output and torque, boost pressure, and tyre temperatures.

Cylinder deactivation system helps to maximise efficiency in the S 63 Coupe, which assists in lowering fuel consumption. This is available when the driver selects the “Comfort” transmission driving mode with a wide engine speed range from 1,000 to 3,250rpm. The transition from four to eight-cylinder operation is quick, snappy, and immediate; the passengers will experience no discomfort of any kind, with help from the AMG Speedshift MCT 9G transmission.

When in “Sport” or “Sport Plus” driving mode, the Race Start function will be available on the S 63 Coupe. The control logic is fairly simple: press hard on the brake pedal with your left foot while simultaneously mashing the accelerator with your right. This allows the onboard electronics to set the optimum engine speed.

The Maybach S 560 stands prime as the pinnacle of Mercedes-Benz luxury. It combines the best of both worlds – the heritage of the Mercedes S-Class with the superlative exclusivity of Maybach. Carrying the very definition of refinement on its back, the S 560 comes with a reinterpreted radiator grille with vertical struts that accentuate its front end.

Coated in its classic two-tone paint finish, the S 560 comes with different colour combinations with a surface finish normally used with a piano lacquer effect. The interior will be available in two new and exclusive colours: armagnac brown/black and savanna beige/black. The upholstery features Nappa leather with a choice of copper-, gold-, or platinum-coloured topstitching.

The S 560 also has a longer wheelbase of all the S Class Saloon cars at 3,365mm and 5,462mm in length. Rear passengers benefit from this with executive seats on both sides. Comfort also takes precedence in the S 560 with its Magic Body Control feature. It combines active suspension with continuously adjustable dampers and its Road Surface Scan stereo camera. This scans the road ahead to allow for sufficient damping of each wheel and adjusts to the impending bumps on the road.

Night drives are also easier with the S 560, thanks to two anti-dazzle infrared lamps. It scans the area ahead for pedestrians or large animals and will be shown in the cockpit display. A thermal imaging camera in the radiator grille will also assist in distinguishing between inanimate and relevant objects.

The S 560 is made for the passengers, thanks to the Burmester high-end 3D surround sound system. Paired with its Frontbass system is the bodyshell structure of the car, which is vibration-free for stable bass housing. There are also a total of 27 speakers with its own drive/amplifier electronics. If you’re ever in need of a sunroof, the S 560 has got you “covered” with its Magic Sky Control. The 2-section panoramic sliding sunroof allows you to change from dark to transparent and back with just a push of the button.

There are two variations of the Maybach S-Class: the S 560 and the S 650. The former houses a 4.0-litre turbocharged V8 with 469hp and 700Nm of torque. With 9G-Tronic nine-speed automatic transmission, it hits a capped 250kph top speed and does o-100 in 4.9 seconds. The S 650, however, has a 6.0-litre turbocharged V12 pumping out 630hp and 1,000Nm of torque. Its top speed is also capped at 250kph while it does zero to a century 0.2 seconds quicker than the former. While both models are rear-wheel drive, the S 650 comes with the 7G-Tronic seven-speed automatic.