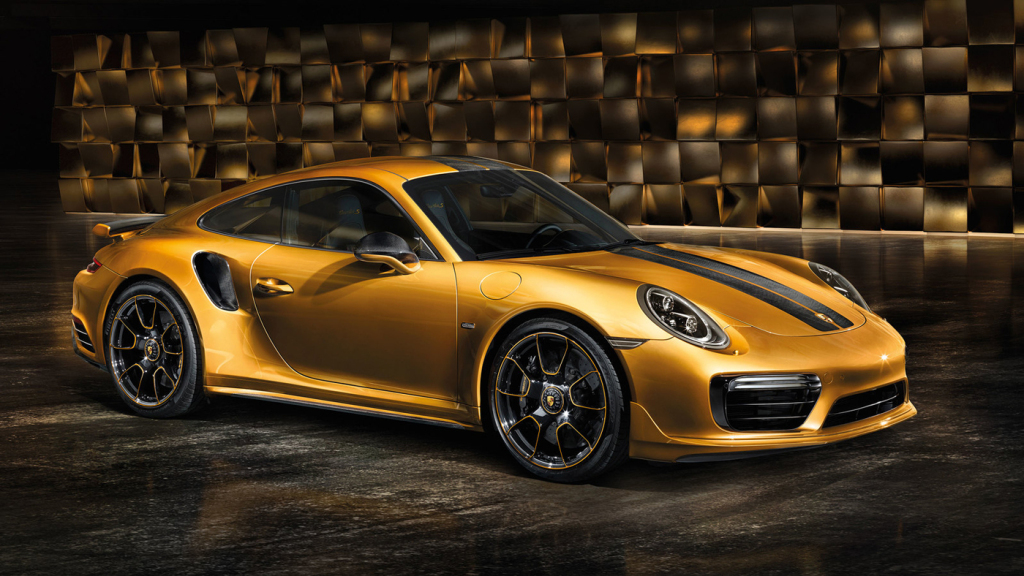 Overdrive: Porsche’s Exclusive Series coupe is the most powerful 911 Turbo S ever

Gear
Overdrive: Porsche’s Exclusive Series coupe is the most powerful 911 Turbo S ever
Share this article
Next article

Turns out Porsche has been having quite the eventful month. Few weeks after the brand from Stuttgart announced that its one-millionth 911 baby has rolled out of the production line, it has now achieved yet another milestone.

Crowned the most powerful 911 Turbo S ever created, the 2018 Porsche 911 Turbo S Exclusive Series coupe is a gleaming gold mass that doesn’t care whether you think it’s ostentatious or loud. It can’t hear your disapproval over the ruckus of its 607hp twin-turbo flat-six anyway.

Because it’s from the Exclusive Series, you can expect a decent amount of frills to be outfitted on this car. Tear your eyes away from its gilded façade and you’ll notice definitive design elements that exude emanate sportiness and luxury.

Its roof, side skirts and trunk lid is made from carbon fibre, and performance is enhanced with aerodynamics that include a redesigned deck lid, a new front spoiler and an automatic rear wing. Contrasting exposed carbon fibre bands stream down the roof and rear, so you’re always reminded of its racing pedigree.

On the inside, expect 18-way adjustable leather seats with inlaid Golden Yellow stripes. The colourway continues onto the microsuede headliner as well as the black carbon fibre interior trim, which incorporates fine copper thread into the weave.

For that snazzy weekend getaway, drive down to the marina with the Porsche 911 Turbo S Exclusive Series coupe, and unload the perfectly-fitting Exclusive Series luggage set onto your yacht.

Coupled with the customisable chronograph Porsche created for the occasion, you’re pretty much set to show off your latest luxury item to the world, no matter where you are.

But it’s what’s under the hood that makes this car the giant it is. While the above-mentioned 3.8-litre flat-six is the same as the regular Turbo S one, it gets a power boost that serves up to 27 more horsepower than before, and 750Nm of torquey fun.

Power is delivered to all four 20-inch gold accented wheels via the well-adored PDK seven-speed dual-clutch automatic, which provides a stupendous sprint to 100kph in only 2.8 seconds (0.3 seconds quicker than the normal S) and max-out figures of 330kph.

Unlike the regular PCCB callipers in the trademark yellow, the Exclusive Series’ brakes are black with a golden Porsche logo.

Produced specifically in the new Porsche Exclusive Manufaktur atelier, which specialises in bespoke builds in Stuttgart-Zuffenhausen, only 500 examples of this car will be made, with a price tag starting from S$1,098,888.

If performance is all you’re looking for, you could always hand over the keys of your regular S to a tuner and save a bunch of money, but there’s no fun in that. After all, a golden car with exceptional power never fails to turn heads.