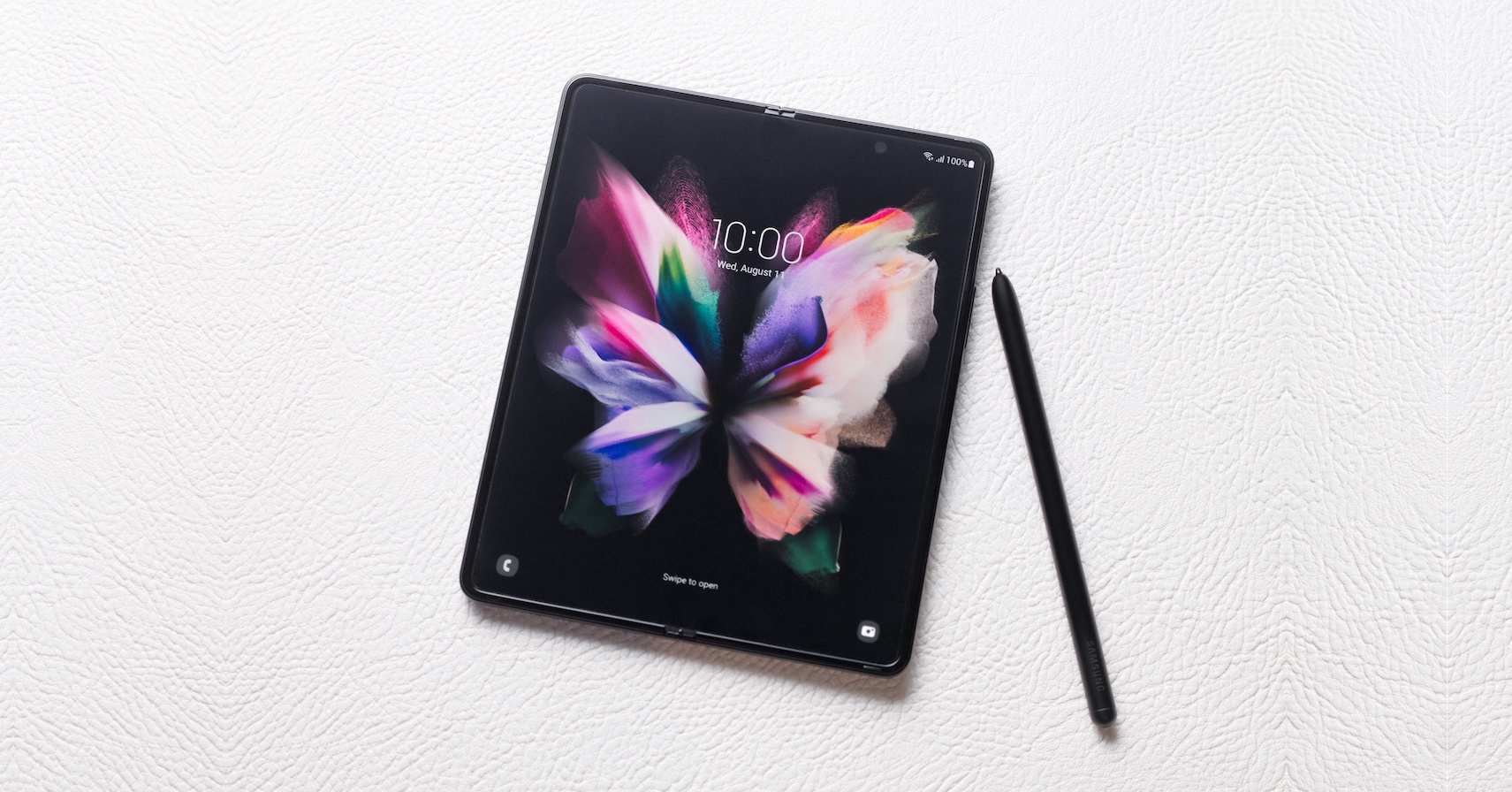 After much anticipation, Samsung unveils the Galaxy Z Fold3 5G.

At the Samsung Galaxy Unpacked 2021 event tonight, the South Korean tech giant showed off the latest iteration of its flagship foldable phone and boy, was it worth the wait. By all accounts, the Galaxy Z Fold3 5G is a powerful addition to the Galaxy Fold series that first launched in 2019 and ushered in a new era for smartphones. Once again, Samsung has pulled out all the stops to create a device unlike anything we’ve seen before, offering us a glimpse of the future and all the possibilities that come with it.

You might like this…
Gear
Latest gadgets from Samsung, Razer, Nikon, LG and Bang & Olufsen
Gear
Review: 6 things we liked about the Samsung Galaxy Buds Pro

So, what’s to love about the new Samsung smartphone? We dive into all the details you need to know below. 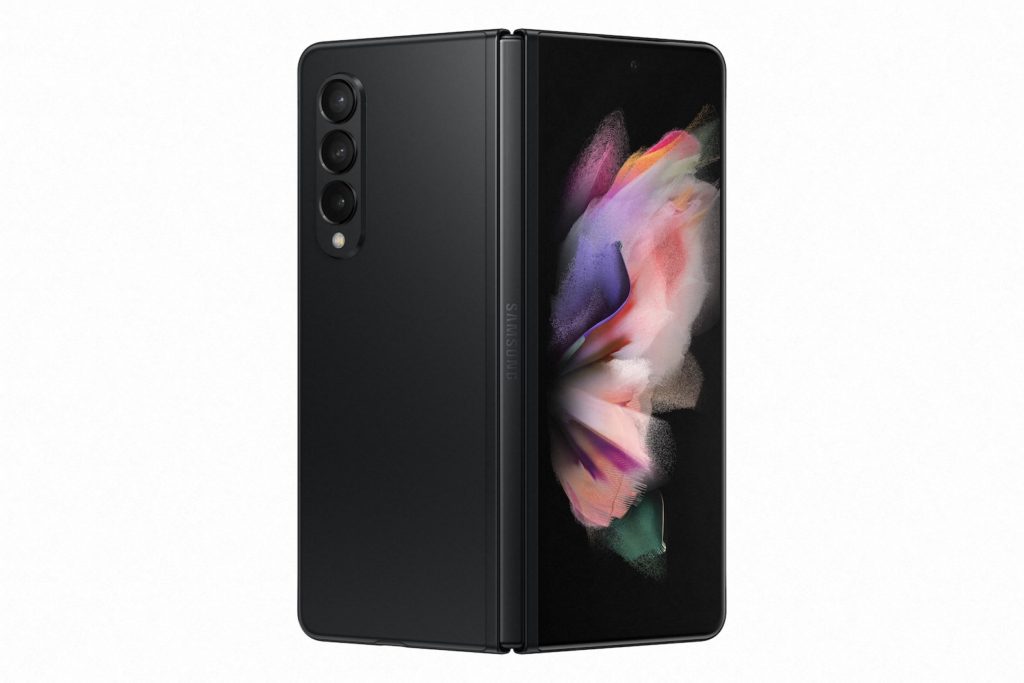 At a first glance, Galaxy Z Fold3 5G may not differ much from its predecessor, the Galaxy Z Fold2. It boasts both a 6.2-inch cover screen and a 7.6-inch foldable dynamic AMOLED 2X touchscreen that display vibrant colours and deeper contrasts. What’s new is that the main screen is now brighter and offers smoother scrolling, thanks to the smartphone’s 120Hz adaptive refresh rate. Plus, if you hold the flexible phone in your hands, you’ll notice that it weighs a lot less — 271g, to be exact. It’s the lightest in the Galaxy Fold series yet.

A new level of durability 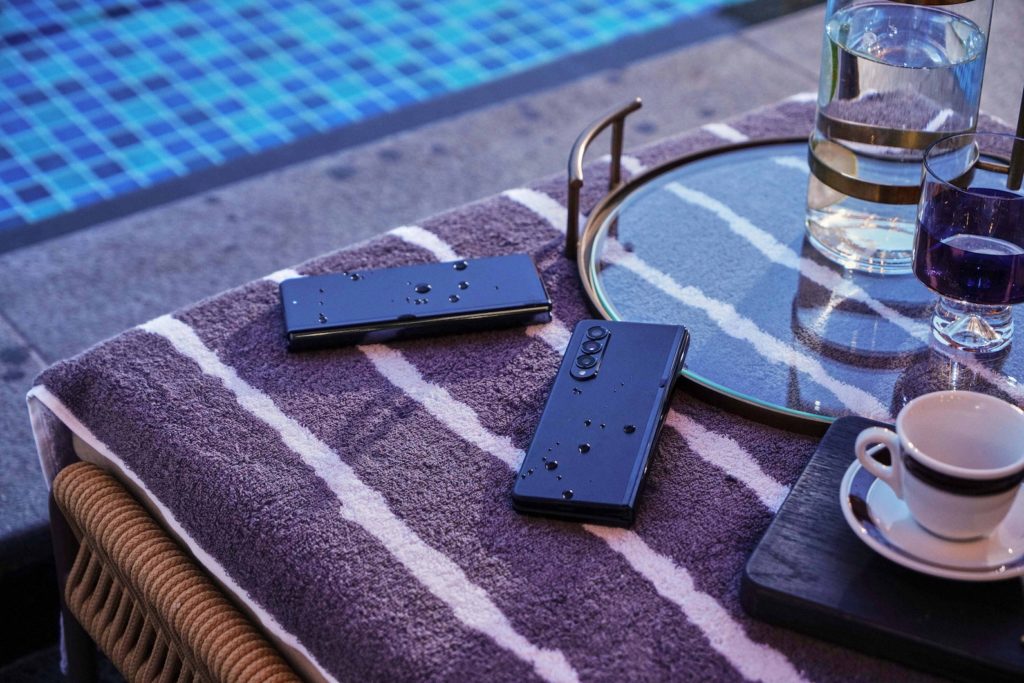 Looks aside, the Galaxy Z Fold3 5G packs a punch with its Armor Aluminum frame — the strongest on any Samsung Galaxy smartphone so far — as well as its equally tough Gorilla Glass Victus. This isn’t some fragile foldable device.

But the most exciting thing about the Galaxy Z Fold3 5G is that it’s water-resistant, boasting an impressive IPX8 rating. That means it can be immersed in water for 30 minutes at a depth of 1.5 metres without incurring any significant water damage.

That makes the smartphone, together with the new Galaxy Z Flip3 5G, the world’s first water-resistant foldable devices. Thanks to its lighter design and increased durability, we can pretty much take the smartphone anywhere — the pool, the gym, the beach — without any worries. 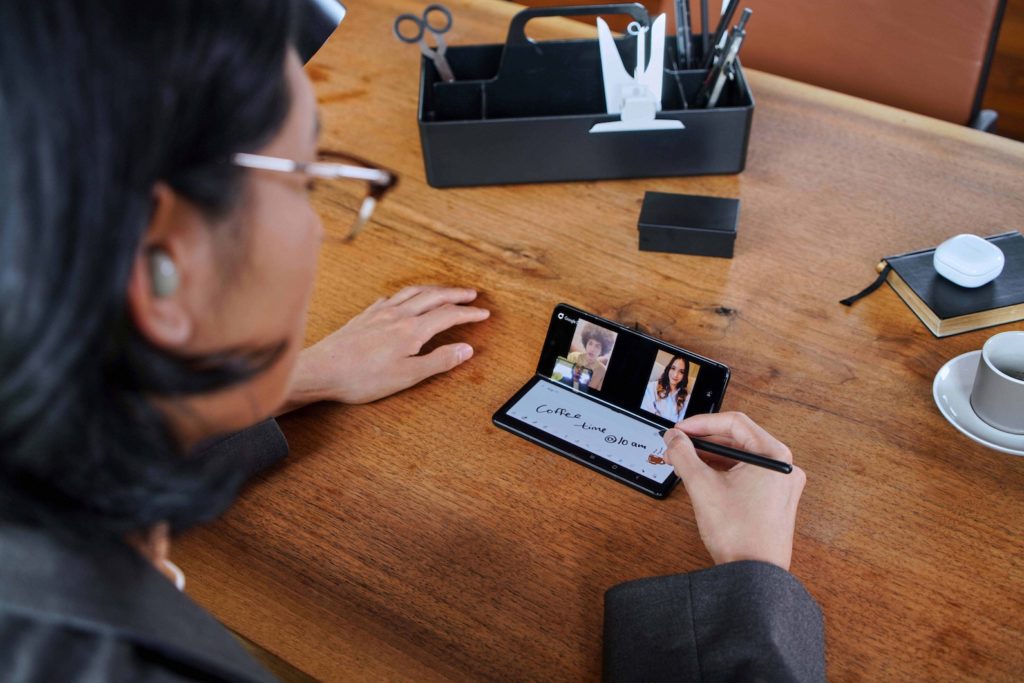 Cameras are a big deal on smartphones, and Samsung offers five of them to work with on the Galaxy Z Fold3 5G. There are three 12MP cameras at the rear, allowing you to choose between Ultra Wide, Wide-angle and Telephoto lenses.

And then there are the two “selfie” cameras: the 10MP camera on the surface of the cover screen and, for the first time, a 4MP under-display camera found on the main display.

Under-screen camera technology, which allows for a selfie camera to be seamlessly and invisibly integrated into a screen, is relatively new in the smartphone market. Once again, Samsung is staying ahead of the curve, which is good news especially when you consider how big a role front-facing cameras now play in our lives, between our virtual work meetings and Zoom calls with loved ones. On the Galaxy Z Fold3 5G, you’ll get to do both with a lot more screen space.

A superior multi-tasking experience, now with the S Pen 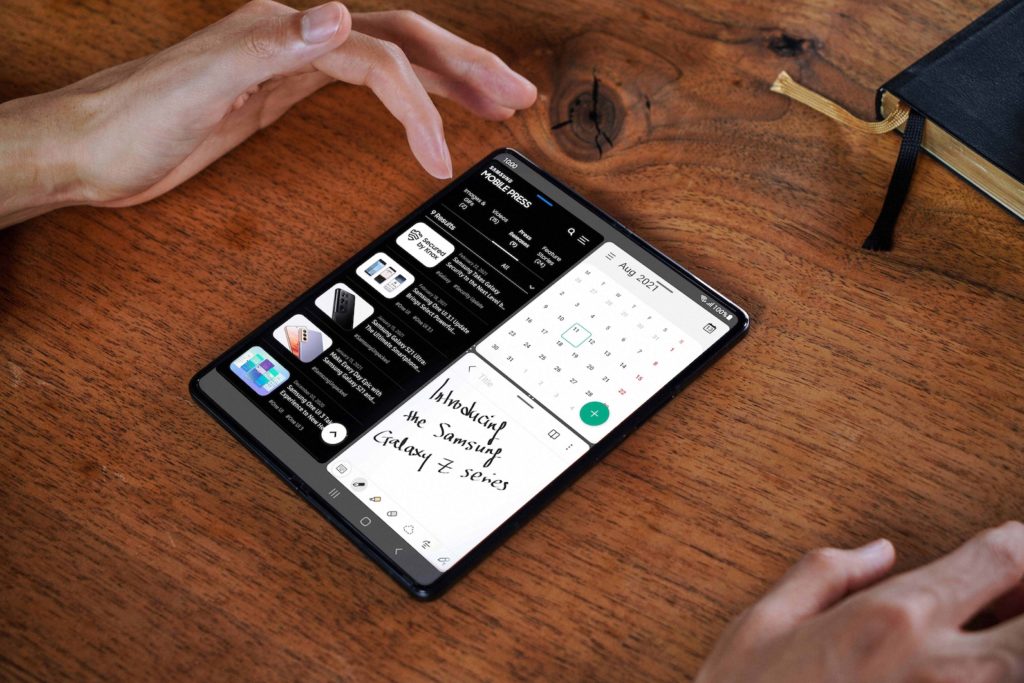 Being a hybrid of smartphone and a tablet, it’s no surprise that the Galaxy Z Fold3 5G is a productivity beast. Like its predecessor, it comes with the Multi-Active Window feature that splits its massive screen and allows multiple apps to be used at the same time, or otherwise opens them up in a pop-up mode.

There’s also the improved App Pair feature that lets users make a shortcut of two apps that they can instantly reopen on a split screen. What will be new to Galaxy Z Fold fans is the Taskbar, which lets users quickly switch between apps without returning to the Home screen.

The smartphone is boosted by Samsung’s 64-bit Octa-Core Processor, which lets it carry out all these advanced tasks, as well as handle high resolution videos and graphic-heavy games, without draining the battery.

Now, Samsung is taking that multi-tasking experience a step up with the S Pen. Once a signature of the Note series, the S Pen has now been specially designed and optimised for the foldable device. It comes with less latency, super precision and a finely-tuned up pen tip, altogether delivering the most realistic writing experience you can get on a Samsung smartphone.

The S Pen will be especially useful when the smartphone is on Flex Mode: you can join a Zoom call or watch a YouTube video on the top half of the main screen, while jotting down notes on the bottom half, for example.

For Galaxy Z Fold3 5G users, there are two options to choose from: the S Pen Fold Edition, which measures 132.1mm long and can be attached to cover of the smartphone, and the S Pen Pro. The latter, measuring 173.64mm, is the more powerful of the two. It’s compatible with other Samsung Galaxy devices with S Pen support, allowing you to switch between devices seamlessly. It also features an LED indicator, Bluetooth connectivity for Air Actions and, because it’s battery-powered, it can be charged with a USB Type-C port.

S Pen support may seem like an obvious fit for the Galaxy Fold series. Now that Samsung has upgraded its foldable device with a more durable screen that is not interrupted by a selfie camera, it seems the perfect time to throw in that highly-requested feature. Add to that the fact that Samsung won’t be unveiling another Note model this year, and you have your answer as to which Samsung smartphone to go for if you’re looking for a multi-tasking machine. 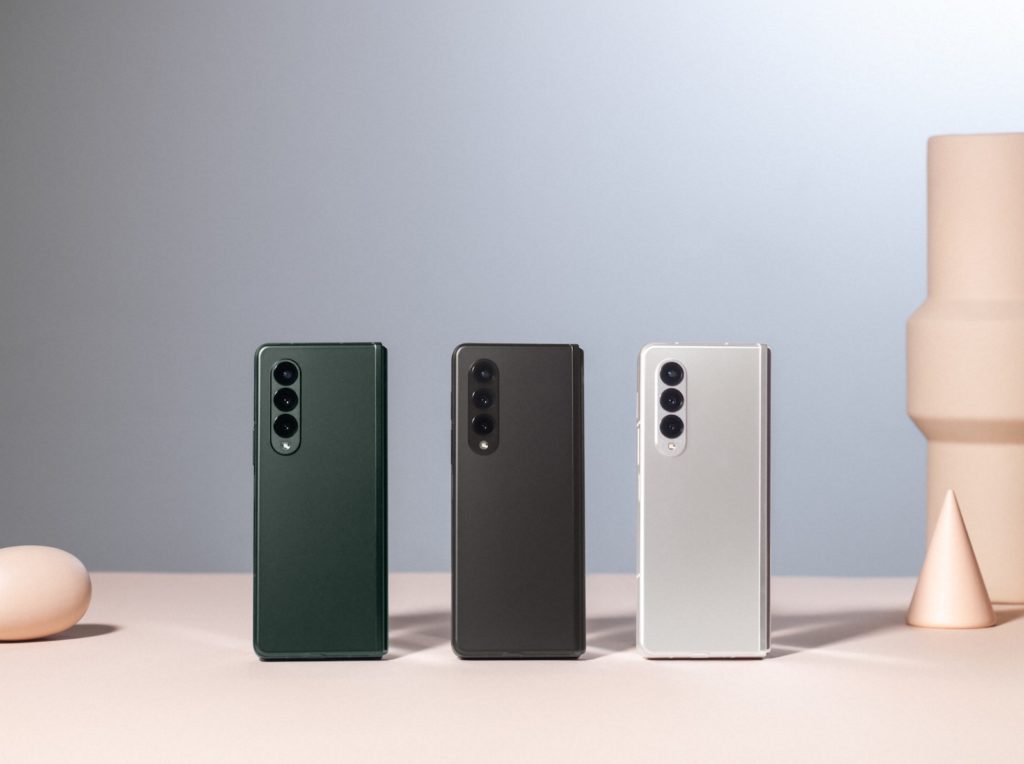 Tonight, Samsung has truly pushed us to reconsider our lifestyle altogether: Why get a tablet and a smartphone when you can easily have both in one device? The Galaxy Z Fold3 5G is a powerhouse in every sense of the word, and yet it also makes things a lot simpler.

With the S Pen, the smartphone also bridges what’s natural — writing by hand, for example — and what’s possible with technology. Ultimately, that is what’s going to win most people over.

Thankfully, they’ll have plenty of choices to choose from. The Samsung Galaxy Z Fold3 5G comes in three classic colours: Phantom Black, Phantom Silver and Phantom Green. In terms of memory storage, the smartphone is offered in 256GB and 512GB versions. And it’s already available for pre-order, along with accessories like the Flip Cover with S Pen that includes the S Pen Fold Edition and a Flip Cover.

Head to the Samsung Malaysia website to find out more.

All images by Samsung. The story first appeared on Lifestyle Asia Singapore

Which Apple AirPods model should you buy? Find your perfect match here