Wireless earbuds: How great can it be compared to its wired counterpart?

Gear
Wireless earbuds: How great can it be compared to its wired counterpart?
Share this article
Next article

Wireless earbuds, or general earbuds for that matter, are a necessity in one’s life. Whether you’re in the office, on the commute, at the gym, or even just going about your day, earbuds are great for blocking out the noise while drowning your ears with your favourite tunes. But what is it about wireless earbuds that gives it an edge over its wired counterparts?

For starters, wireless earbuds are way better mainly because you will not have to deal with tangled wires all day. Many wireless earbuds these days come with the same technology that is being used with headphones, which includes noise-cancelling capabilities.

Of course, that isn’t to say that getting earbuds are infinitely better. It has always been about weight and portability when it comes to listening to music; nobody wants to walk around with an expensive pair of headphones carrying all of its weight attached to your head. While headphones are generally better in terms of performance and sound quality, it can never truly outclass a pair of earbuds, even when the new generation now focuses more on ensuring most headphones are lightweight and compact.

This has to do with the case of portability, which earbuds has the upper hand of course due to its significantly small size. Scroll on down to find out more about the best wireless earbuds that are available in the market right now.

Gear
These are the top smartphone cameras for shutterbugs If you’re an iOS user, the Apple AirPods are made for you to get the best out of what you’re listening to. The AirPods are Apple’s way of creating a set of wireless earbuds, largely due to the missing headphone jack from its latest line-up of iPhones. What’s great about the AirPods is its easy setup and not just with the iPhone. It also works well with various Apple devices like the iPad, the Apple Watch, and even Mac. The AirPods are essentially a seamless integration for your Apple devices, allowing you to pick up calls, listen to music, and go about your day without the hassle of having wires in the way. It also works with Siri as it comes with a speech-detecting accelerometer. To give it a quick charge, place the AirPods in its case and place said case onto a Qi-compatible charging mat.

The Samsung Galaxy Buds are the Korean conglomerate’s way of responding to the Apple AirPods. It made its debut alongside the Galaxy Note 9, gaining much plaudits in the progress. The Galaxy Buds have been deemed the best wireless earbuds in the market, and that is a bold claim considering the amount of competition it has to put up with. Not only is it compact and portable, the Galaxy Buds are also extremely comfortable while promising a long battery life on a single charge. It also has wireless charging capabilities, which is great if you have a Galaxy S10 Plus. The Galaxy Buds are also sweatproof, ensuring that it can be used during your workouts. It can also access the Bixby Assistant as well as adjusting equaliser settings through voice command alone. 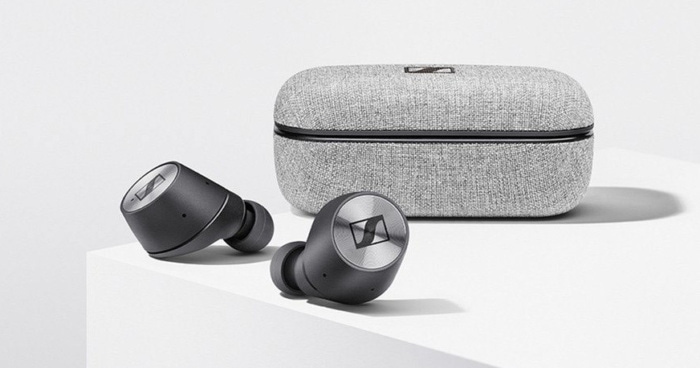 Sennheiser is arguably one of the best when it comes to producing high-quality audio devices. The Momentum True Wireless is one such wireless device, bringing with it a new dimension of wearable sound in a miniaturised design. If you’re looking for wireless earbuds that pride itself on state-of-the-art audio technology for the best sound possible, the Momentum True Wireless is your best bet. Design-wise, it’s clean and aesthetically pleasing, allowing you to get the most out of the earbuds. Its Transparency Hearing feature enables you total awareness of your surroundings, whether or not your music is playing. It also promises to be highly comfortable on your ears, ergonomically designed for a perfect fit. The Jabra Elite Active 65t is made for your everyday fitness junkie. It’s an extremely versatile pair of wireless earbuds that also comes with an IP56 waterproof rating alongside a host of app-based features to further enhance its overall performance. It’s highly comfortable with a snug fit for any set of ears while still capable of delivering a solid performance when it comes to music and calls. What’s great about the Jabra Elite Active 65t is its versatility; it performs well on both iOS and Android devices, meaning that it is compatible with both Siri and Google Assistant. You will also still be able to pick up ambient noise that doesn’t flood out your music, which is great if you’re using it for work, exercise, or for when you’re in commute. Bose is another household name that requires no introduction, introducing high-end audio devices since the early 1960s. the Bose Soundsport Free lives up to the reputation that was set by its headphone counterpart, delivering a powerful sound while still remaining perfectly comfortable for your ears. Bose has also packed its Soundsport Free wireless earbuds with plenty of technology and features, ensuring it doesn’t feel left out. This includes a volume-optimised equaliser; a multi-function button that can accept and decline calls or even pause and skip your music. Its Bluetooth antenna was also repositioned so you can get the strongest signal, no matter where your device is. As the Bose Soundsport Free is marketed towards athletics, rest assured that it is also waterproof.

Apple Samsung Sennheiser BOSE Jabra wireless earphones Wireless Earbuds
Wi-Liam Teh
Senior Writer
Wi-Liam is a geek at heart with a penchant for tattoos. Never without a drink in hand (preferably whisky, gin, or Guinness), he is also a writer by day and a keyboard warrior by night. On his day off, he masquerades as a streetwear and sneakerhead enthusiast while his bank account says otherwise.
Tech Cars Watches Entertainment Food Drinks