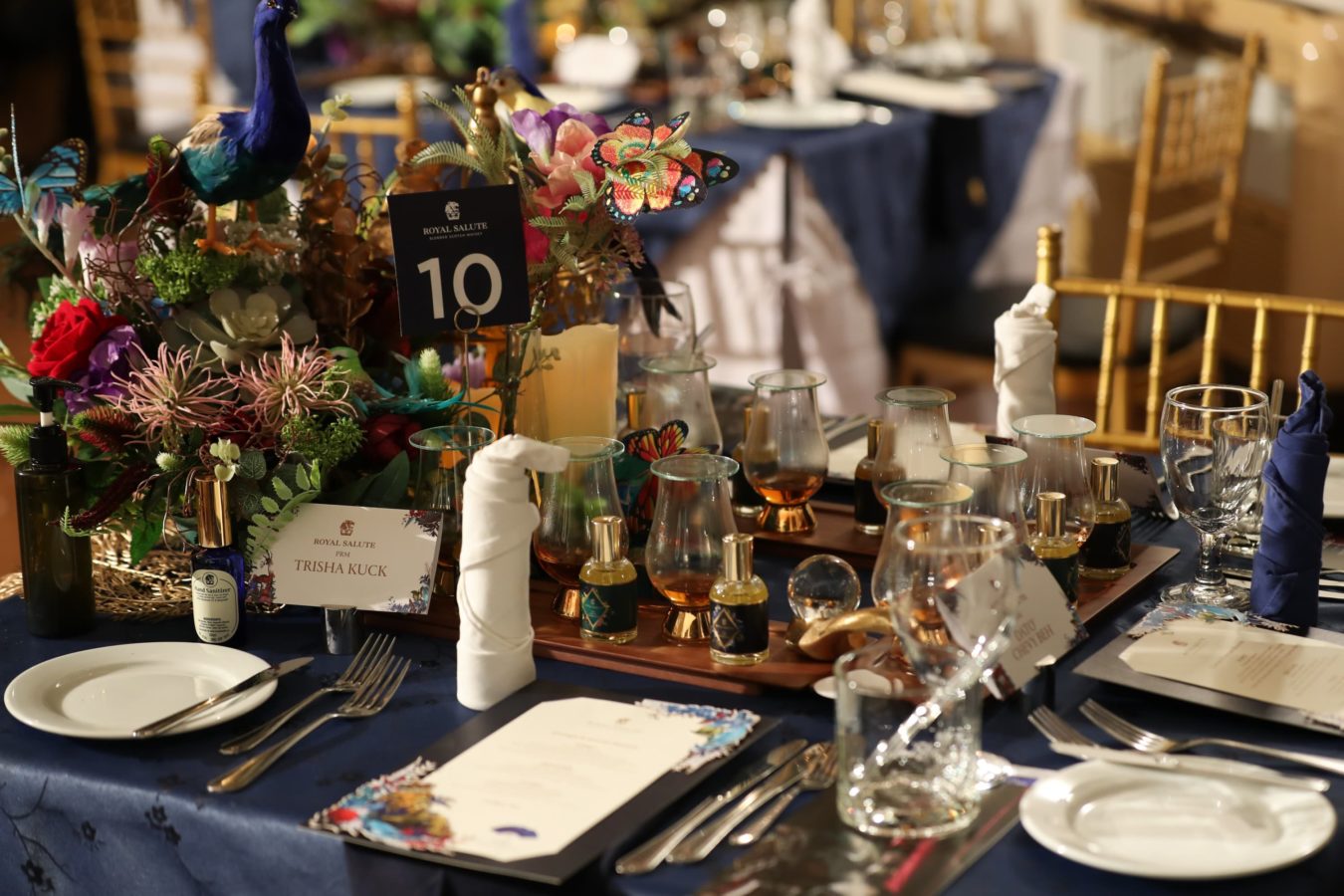 The famous perfumer speaks to us on bridging the gap between perfumes and whisky tasting.

Not too long ago, we got to experience the Royal Salute treatment of travelling to Penang, catching the unveiling of the Royal Salute Time Series 52-Year-Old Single Cask Finish Scotch, while simultaneously discovering the Royal Salute Olfactory Studio for the first time in Malaysia.

This year’s edition of the Royal Salute Olfactory Studio was designed hand-in-hand with introducing the Time Series 52-Year-Old Single Cask Finish Scotch. But the multi-sensorial experience created with Barnabé Fillion is intended for guests to discover new ways of tasting whisky, as well as how it’s synonymous with the world of perfumery.

For the unfamiliar, Fillion is a world-famous perfumer – also known as a ‘nose’ – who has created many iconic fragrances, from Aesop’s Marrakech Intense and Rozu to Le Labo‘s Geranium 30. For the Royal Salute Olfactory Studio, he has created three perfumes that match the three aged blends from the whisky brand: The Signature, The Malts, and The Lost Blend.

In Malaysia, the multi-sensorial experience will be hosted by Scotch Whisky Ambassador Jasper Epsom. Guests will not only get to feast on a fine dinner, but also get to taste the three whisky blends alongside the three fragrances created by Fillion. After the feast, guests will leave with a gift box containing those perfumes.

But to really delve into the making of the Olfactory Studio, we sat down with the nose himself for a little chat on how whisky and perfumes have more things in similar than you’d think, as well as the purpose of this multi-sensorial experience.

What was the first thing you thought when you were approached to design the Royal Salute Olfactory Studio experience?

I thought it was an amazing opportunity to be able to transcend the usual conventions and traditions of whisky-tasting. I wanted to try and elevate the moment and that sense of awakening with the nose. After all, 95% of what you taste is informed by your nose. If you close your nose, you wouldn’t be able to enjoy the taste of whisky as much.

For me, the Olfactory Studio was a starting point on how to enjoy your whisky more. We wanted to give people the opportunity to enjoy objects or different researches that we have done on the subject of time, which as we know, is very important to Royal Salute. So yes, for me, it was to be a transcendental tasting experience.

Do you feel that the olfactory nuances between Scotch whisky and perfume are similar?

Definitely. But there are also differences. For example, in the world of perfume, my only concern is to work with the freshest and most newly-distilled ingredients. However, with whisky and especially Royal Salute, you really want to work with time and the sense of ageing. Obviously, the raw materials and malt that is used are very important, alongside the barrels, the way they are matured, and how long, is very important.

Something that’s very common to perfume too is the blending process. In Royal Salute, there’s a big importance in the art of blending as we do when we create perfume.

Can you walk us through the process of creating the Royal Salute Olfactory Studio perfumes?

It’s an interesting process, because we had the beautiful Royal Salute 21 Years Old Scotch Whisky for the longest time. For this re-staging moment (for the Olfactory Studio), it was an opportunity to show what exactly is the beauty of a pure malt blend.

The Lost Blend was also an opportunity to show this beautiful peated, smoky side that we always add in when creating for Royal Salute, but in a very subtle way. There’s always a trace of smoke, but for The Lost Blend, you really get more of a peated blend. But of course, it’s not a full-on peated blend; there are other brands dedicated to that. For us, this is just one element of the blend. Hence, we played with the idea of continuity of the same blends that were served in 1953 for the coronation of Queen Elizabeth II.

Then, we have The Malts, which expresses this beautiful spicy, enriched profile from the malt itself. These three directions gave me so much inspiration to use some particular ingredients for each of the perfumes.

How do you ensure that the fragrances you created actually go together with the three Royal Salute blends?

I had to drink a lot of whisky to ensure I don’t make mistakes (laughs). But again, it’s about time and patience.

Obviously, your first impression when drinking whisky is interesting. But once your glass is empty, the smell that lingers is a very good way to know what the true scent of the whisky is. I have tried the whisky with different levels of dilution, different foods, and also put the ingredient that was my inspiration next to it to smell both at the same time. It’s actually a very fun discovery process.

What do you want guests to achieve after experiencing the Royal Salute Olfactory Studio? What, do you feel, would be a measure of its success?

The Olfactory Studio experience is a very beautiful moment for the people experiencing it, especially if it’s a dinner where you might not know who your neighbour is. It’s important to me to create this connection between these people who are celebrating life and celebrating this dinner — these moments.

There is a focus on the social aspect of the experience, but what I really want is to push this multi-sensorial experience that the guests are sharing and to give each other comments about what they’re smelling. At the same time, I’m trying to encourage people to, for those first few seconds, really memorise and analyse their first impressions of it before sharing it with other people.

For my other Olfactory Studio experiences, a lot of people came to us a few days after and say that they’re still thinking about the connection between the drink and the scents. So for me, it’s not just about creating these beautiful moments but also sharing them with great people. My goal is to stimulate your perceptions to enjoy the Royal Salute whisky even more. 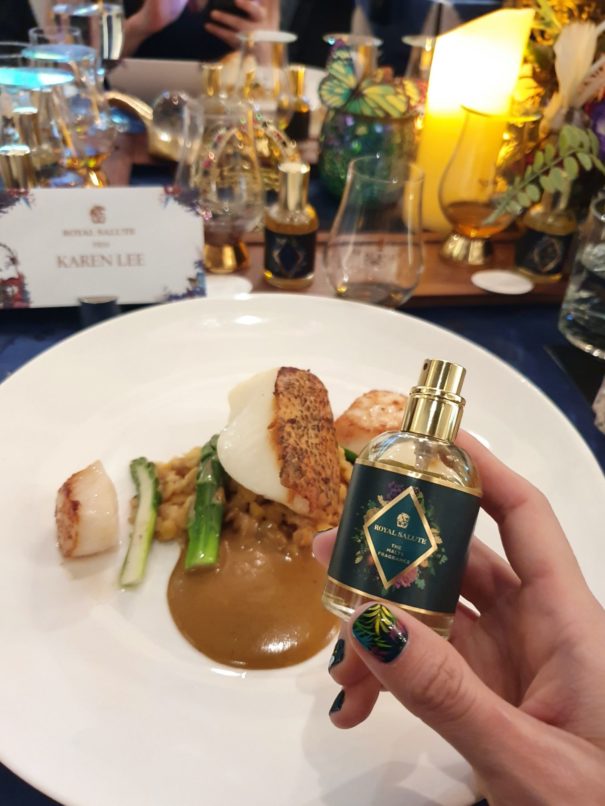 Lastly, out of the three Royal Salute blends, which is your favourite?

To be honest, I love them all but I’m more used to The Signature. I have so many memories of it, and it’s a smell that’s been there in my life for several years which I associate with good memories.

I also found The Lost Blend to be a piece of art. The peat is definitely slightly more than what Royal Salute has done before, but it still maintains the signature of the house. I love the spices that you can taste, and the malt blend is very rich. It’s basically like having all the spices linger, as though you’ve been smoking a cigar.

Royal Salute barnabé fillion royal salute olfactory studio
PohNee Chin
Editor, Kuala Lumpur
Poh Nee is the editor and writes about travel and drinks. When she's not living out her holiday dreams via Google Earth and sipping on an Old Fashioned down at the local bars, you can find her snug at home bingeing on Netflix and mystery fiction.
Travel Drinks

Q&A: Syed Syafiq doesn’t play by the rules — he redefines them

Q&A: Ameera Khan takes charge of her life on her own terms

In honour of the late Sean Connery, these are 5 of his best films

Are you tired of all the holiday collections yet?