Home > Living > People > The Z List: Layla Sania on juggling her passion for singing and education 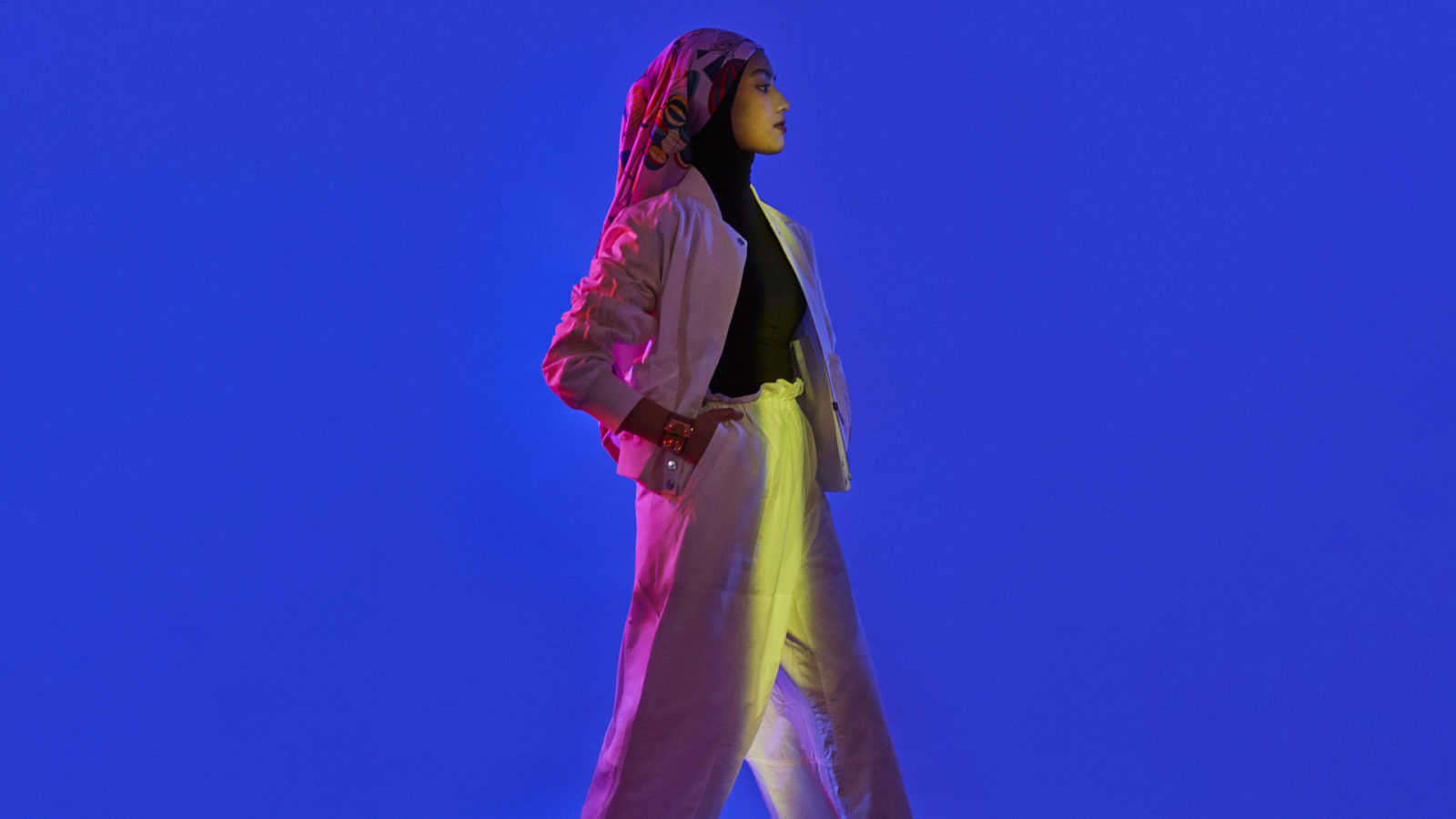 The Z List: Layla Sania on juggling her passion for singing and education

Living
The Z List: Layla Sania on juggling her passion for singing and education
Share this article
Next article

When she dreams, she dreams really big. Rising to fame as a multilingual singer won’t stop her from pursuing her goal of becoming an early childhood educator. Meet The Z List 2022, the lively and warm-hearted Layla Sania.

A tiny, feisty terror in her tudung — this is how Layla’s manager describes her, much to her own chagrin. ‘Feisty’ is definitely one way to sum up the 20-year-old singer. Right from the moment she entered the studio, Layla is brimming with so much energy that you can’t help but be drawn in yourself.

“People like to tell me that my personality will change when I grow up, but I really hope not,” says Layla with a laugh. “I hope in the future, I can still be this loud, noisy and annoying ‘me’!”

Like most singers, Layla’s dream began at a very young age. She had always known she wanted to pursue singing seriously, but her heart also yearned to become a teacher. She absolutely adores working with children, and so, no matter how far her singing career goes, Layla is determined not to give up on her passion for teaching.

“Both are my dreams,” confesses Layla. “People keep telling me it’s impossible to do both and still be famous, but I don’t think it is. I think I could do it.”

During her schooldays, Layla did what many aspiring singers would do at the beginning of their journeys: she covered songs, but she also branched out in various languages — Malay, English, Chinese and even Bollywood songs that she had memorised. Layla likens it to K-pop fans singing their favourite songs; she was able to memorise them and sing them fluently, because she loved the songs so much.

On the cusp of adulthood, Layla’s mother had finally sat her down and asked her, very seriously, “What is it that you want to do in your life?” And Layla had floundered in her answer: “Singing and teaching!” She is grateful for her family’s constant support, and so, her journey of juggling both her studies and her singing began — now in university, Layla is majoring in early childhood education while maintaining her musical career.

Growing up, Layla admits that her personality was not as boisterous as it is today. She was shy and timid, and so she never dared to enter any singing competitions in school despite her passion for it. It was only when she was about 15 years old, when her mother encouraged her to join a small singing competition — which she won by a landslide — did her confidence grow, too.

“I don’t want to limit myself when it comes to language, and especially in music.”

On being a multilingual artist

Layla attended a Chinese independent school from kindergarten all the way to secondary level, so to say she’s fluent in speaking, reading and writing in the language is a given. Singing in Chinese was something that seemed obvious in its path — and so, as soon as she began her career with Warner Music Malaysia, Layla declared that she wanted to release a single in Mandarin.

“Let’s test the market first,” is what Layla was told instead, because at that point in time, she was too new to the industry. “We’ll release two Malay songs, and see how it pans out.”

Suffice to say, her singing talent was never in doubt. Layla received fairly positive response, but she felt that she wanted to do something different — and so, her third single “左手陪右手 (By Your Side)” received a far better reaction than she ever expected. It was what fully set her on the course of pursuing music as a multilingual artist. Her most recent single is “巴比诺 Bambino”, released in December last year and features our fellow The Z List alumnus, singer and rapper Bunga.

“I think if I were just starting out now, there wouldn’t be as much hype about it, because it’s everywhere,” Layla quips. “But at the time, I think it was still considered pretty rare for a Malay girl to sing in Chinese. So, the reaction was great. They were really impressed that I could sing so fluently in the language. I got a lot of supportive comments, so it was really encouraging.”

Moving forward, Layla has expressed wanting to try learning Tamil, and hopes to be able to sing in the language, too. She is also currently learning Sarawak language from her mum.

“I don’t want to limit myself when it comes to language, and especially in music,” Layla says. “It’s all mostly self-taught, so if it’s too difficult, then maybe I just won’t go down that road!”

“I set myself apart from others by being who I am, completely. I just like to be my unique self.”

On juggling school life and fame

Not all rising stars get the special treatment in school — some get the shorter end of the stick when it comes to being young and famous. Layla opens up about having to juggle a full-time singing career while still going to school every day, and it proved a much more challenging feat than she had initially thought.

“I used to get bullied in school because of the fact that I was a singer,” Layla confides. “People would call me names, and when I came home, my tudung would have scribbles all over it. But I’m very grateful for my family, they were there for me through it all, and gave me advice to handle it. When it got worse, I started to question whether I really wanted to pursue this singing career. It was just something that you had to experience to understand. There was a lot of pressure, but eventually I managed to balance it out. I told the company that I wouldn’t take jobs on weekdays if I could, because I wanted to focus on school during the week.”

Now that she’s out of school, Layla has truly appreciated her own personal growth as both a person and an artist. She counts herself extremely lucky to be able to do what she loves, because it really is a rare opportunity. Not everyone is able to realise what they wanted to be since they were young. And not everyone, even after realising it, can really go for it. The only downside, as Layla notes, is that you only get 50% of your private life. The other 50% belongs to the public.

On being at the tail end of the ‘Gen Z’ adulthood

As one of the youngest of The Z List alumni, Layla surprisingly does not fit into the ‘Gen Z’ mould, at least not without some curves along the way. A defining trait of a ‘Gen Z’er is being always digitally informed, but Layla admits that being ‘digital’ is something she’s not.

“Guess what? Some of us aren’t tech-savvy, okay!” Layla exclaims, laughing. “We can be clumsy with technology, too. When I first had to do a class online, I didn’t even know how to turn on the camera. My teacher was telling me to ‘turn it on’, but I legit didn’t know how! I was talking and smiling at her on the little screen, but it’s only when the class ended did I realise I never had my camera on. So, don’t be fooled! Not every ‘Gen Z’er is good with tech.”

Still, Layla is as individualistic as any ‘Gen Z’er can get. Her quirky, unconventional self is not something she feels she has to hide — in fact, she’s so transparent about everything that she struggles to think about a fun fact about herself that people might not already know about her.

“I think the way that I set myself apart from others is by being who I am, completely,” Layla says. “Every individual is different, and me? I’m this very loud person, and I can even be a little crazy. Someone else might present a different version of themselves — so for me, I just like to be my unique self. I think if you portray yourself as exactly who you are, people will be able to accept you even more.”

Now that Layla has more time on her hands to pursue her career in the arts, she’s looking forward to experiencing new things in life. Just recently, she got her big acting break in the film Small Town Heroes, released in February this year and directed by Ryon Lee.

“There were a lot of things I had to learn from scratch during filming, like dancing… and silat! It was really crazy,” Layla recounts. “But it was a lot of fun. I love the crew, and the people I worked with. Everybody was just really supportive, because I was so new. I was really nervous at first, but by the time we’d shot the film halfway, I was enjoying myself. I want to keep doing new things that scare me, because I think it would be a really good learning experience for me.”

Singer The Z List Layla Sania Multilingual
Puteri Yasmin Suraya
Brand & Partnerships Writer
As a literature buff, Yasmin has a deep love for fiction and poetry. When she’s not writing or café-hopping, she enjoys binge-watching period romances, (badly) belting out show tunes, and curating Spotify playlists to match her mood for the week.
Sign up for our newsletters to have the latest stories delivered straight to your inbox every week.