Home > Living > People > The Z List: Tabitha Lam of Dolla on the highs and lows of her shot to stardom 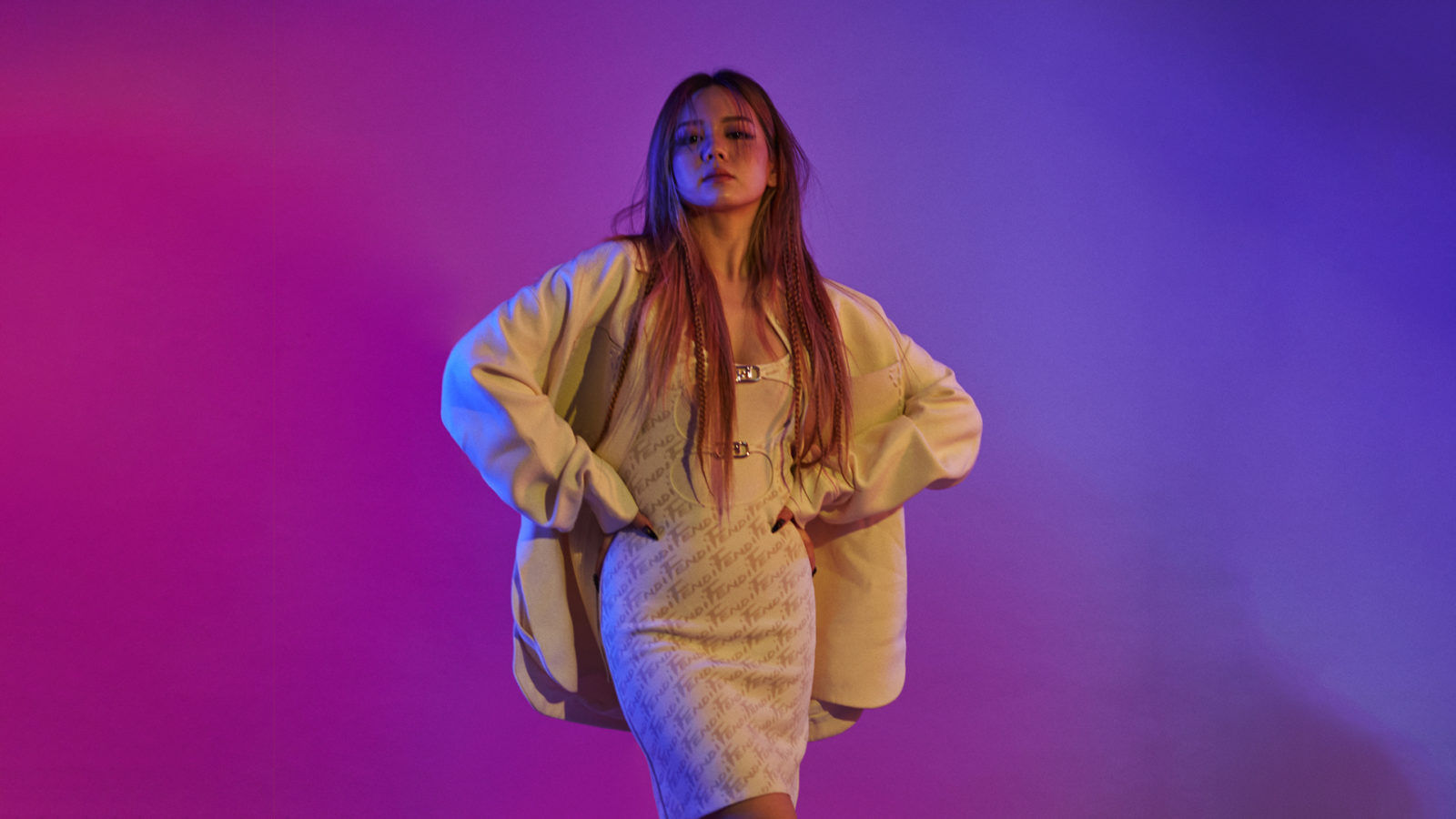 The Z List: Tabitha Lam of Dolla on the highs and lows of her shot to stardom

Living
The Z List: Tabitha Lam of Dolla on the highs and lows of her shot to stardom
Share this article
Next article

A go-getter when it comes to her musical career, she is known as the ‘Cute Girl’ from the popular new-generation girl group, Dolla, which has been making headlines since their debut in 2020. Meet The Z List 2022, the talented and adorable Tabitha Lam, fondly known as Tabby.

If you still haven’t heard of Dolla by now, are you really keeping up with pop culture? The girl group sensation first released their debut single “Dolla Make You Wanna” back in 2020, on the cusp of the pandemic, and have since shaken the Malaysian stage with the strong vocals, intricate dance moves and snazzy style of its members.

Tabitha Lam, known endearingly as ‘Tabby’ by both friends and fans alike, first graced the front pages of entertainment media as one fourth member of Dolla, making her debut along with Sabronzo, Angel and Syasya. At 22, Tabby is the second oldest — and dubbed the ‘cutest’ — Dolla girl, and her character certainly shows it. She is cool and collected, but still possesses this sparkling wit about her that shines when she cracks a joke. Despite getting swept up in all the craze and attention that Dolla has garnered, Tabby still prefers the quiet, unassuming lifestyle of an introvert.

“I’m actually a very reserved person,” Tabby admits. “I love a little peace and calm in my life, and I like going to cute cafés to relax.”

Tabby always saw herself shaping up to be a singer, and she is ever-grateful to her parents for their constant support by bringing her out to music events and sending her for singing classes. She was eight years old when she took part in her first real singing competition, and she knew right then that this was what she wanted to do for the rest of her life.

“I’d say my biggest musical inspiration is Ariana Grande,” she says. “She’s just the full package for me. She’s beautiful, a great singer, and she dances… she puts on such a good show. All around, she’s just super talented. And I aspire to be like her. I just admire someone who not only can sing really well, but also goes for the kind of music she likes. That’s the dream right there.”

“It would be so wonderful if people can express themselves and create music that they want to create, and that others would want to listen to.

On creating the perfect harmony with Dolla

Unbeknownst to many, Tabby is only newly acquainted with dancing. While she’s been a singer for more than ten years now, only three of those have been devoted to really learning to dance. And as Dolla was formed as a four-member singing and dancing ensemble right from the start, it was admittedly a challenge for Tabby at first.

“When we met with our choreographer Ezra, he really knuckled down and taught me everything,” recounts Tabby with a laugh. “I’ve had experience dancing in musicals before, but I never learned the proper techniques. A few days after I started learning, I doubted myself a lot, but I was able to push through. I remember for our first music video, I came out sweating. I was mostly tired and stressed out from trying to remember all the steps. As someone who didn’t grow up dancing, remembering all the steps is no joke!”

One might say that Tabby’s journey with Dolla was written in the stars. Tabby had a dream, and Dolla had been her one true calling — a talent search and an audition later, she was chosen as one of the lucky four to join the girl group.

“I was worried about joining a girl group at first, because you know how it can get a little complicated sometimes,” Tabby confesses. “But it was actually so good. Even until today, I feel like the girls are super easygoing. Somehow, we all just managed to click really well. You can even see it in our videos — we have this kind of chemistry that’s really fun, casual, and carefree.”

Since the group’s formation, Dolla has released a number of singles, most of which are available on their EP, “Dolla: Mini Album”. They have also collaborated with various local artists including Shila Amzah, Shalma Eliana, Hael Husaini, just to name a few. One of their biggest achievements thus far, according to Tabby, is getting featured on a billboard in Times Square. Dolla was chosen to be part of Spotify’s Equal Singapore and Malaysia campaign, and the treat is that the group gets to be front-and-centre in front of New York City.

“I think the next milestone we’re aiming for is to perform at a music festival, or even get to tour Southeast Asia. Or better yet, maybe we’ll get to sing with Ariana Grande,” Tabby jokes. “Now that would really be to die for.”

“They didn’t realise that the words they used were really hurtful. It’s like they didn’t see us as people.”

On unwelcome comparisons and bouts of criticism

When Dolla first emerged as a four-person girl group with rapping and dancing involved, there was just no way the group could escape the wrath of local K-pop fans. People on the internet are known to be incredibly quick with their comments, and more so the particular K-pop fandoms.

At the time Dolla made their debut, the response was half-half — while there were a lot of people who loved it, those who didn’t were a very loud minority. The hate that Dolla received on their debut video of “Dolla Make You Wanna” was intense, as Tabby recalls: “It’s like they didn’t see us as people. They didn’t realise that the words they used were really hurtful. But you eventually learn to filter it out of your life.”

There were also a lot of comparisons made between them and another extremely popular four-person girl group who dance and rap — the huge, international sensation Blackpink. Die-hard fans of the latter group were quick to say that Dolla had committed plagiarism. However, Tabby says that the truth is far from it, and that the girls of Dolla are branching out and finding their own identity. She hopes people would recognise them as their own thing, and actually see what they bring to the table instead of just making comparisons.

“I actually find comparisons more like a compliment than anything,” she quips, “because to even be compared to an international phenomenon like Blackpink is something totally great! It shows that our quality is at a certain standard where it can be seen in that way.”

A bit of attention is pretty much a given with the job, but what Tabby feels is the most difficult part of it is the fact that you’re supposed to be ‘happy’ all the time. She explains: “You’re supposed to be the life of the party no matter what, and your personal feelings usually come second — however bad your day is going, it’s just something you have to push through to keep a positive outlook.”

“Having the [Dolla] girls with me makes it all so much easier,” says Tabby fondly. “I always have fun with them, and I know I’ll always have someone to talk to… someone to rely on.”

On being a ‘new-generation’ artist in Malaysia

As a ‘Gen Z’er in the world of music, Tabby notes that the thing about the local culture is its reliance on the comfortable. The world is changing, and so are music trends around the world, and it’s high time that Malaysian audiences give something new a try. That’s what Dolla aims to do, too, as a group. They want to introduce a brand new genre that can not only shift the local music scene, but also still work with what we’ve already been enjoying so far.

“I think with music nowadays, artists have gone for the ‘self-expression’ route,” Tabby says. “So, ever since I was young I’ve always wished that Malaysia had more diverse musical genres. We tend to lean a lot towards ballads, and it’s good that we have our own ‘defining’ type of music. But it would be so wonderful if people who love jazz music, for example, can express themselves and create music that they want to create, and that others would want to listen to. I’m seeing it happen more and more today, and it makes me happy to see even more artists like ourselves emerging — girl groups, boy bands and artists that are creating their own unique types of music.”

Moving forward, Tabby says that she is planning to fully focus on her career. Now that she has graduated from university, she is ready to dive head first into the industry and learn all she can.

“I might even try hosting or acting, or even starting my own business — I’m open to just about anything that I think would suit my personality,” she says. “And it’s the same with Dolla. We’re just growing even bigger now, and our goal is to hit the Southeast Asian market by this year!”

Singer The Z List Tabitha Lam Tabby Dolla
Puteri Yasmin Suraya
Brand & Partnerships Writer
As a literature buff, Yasmin has a deep love for fiction and poetry. When she’s not writing or café-hopping, she enjoys binge-watching period romances, (badly) belting out show tunes, and curating Spotify playlists to match her mood for the week.
Sign up for our newsletters to have the latest stories delivered straight to your inbox every week.