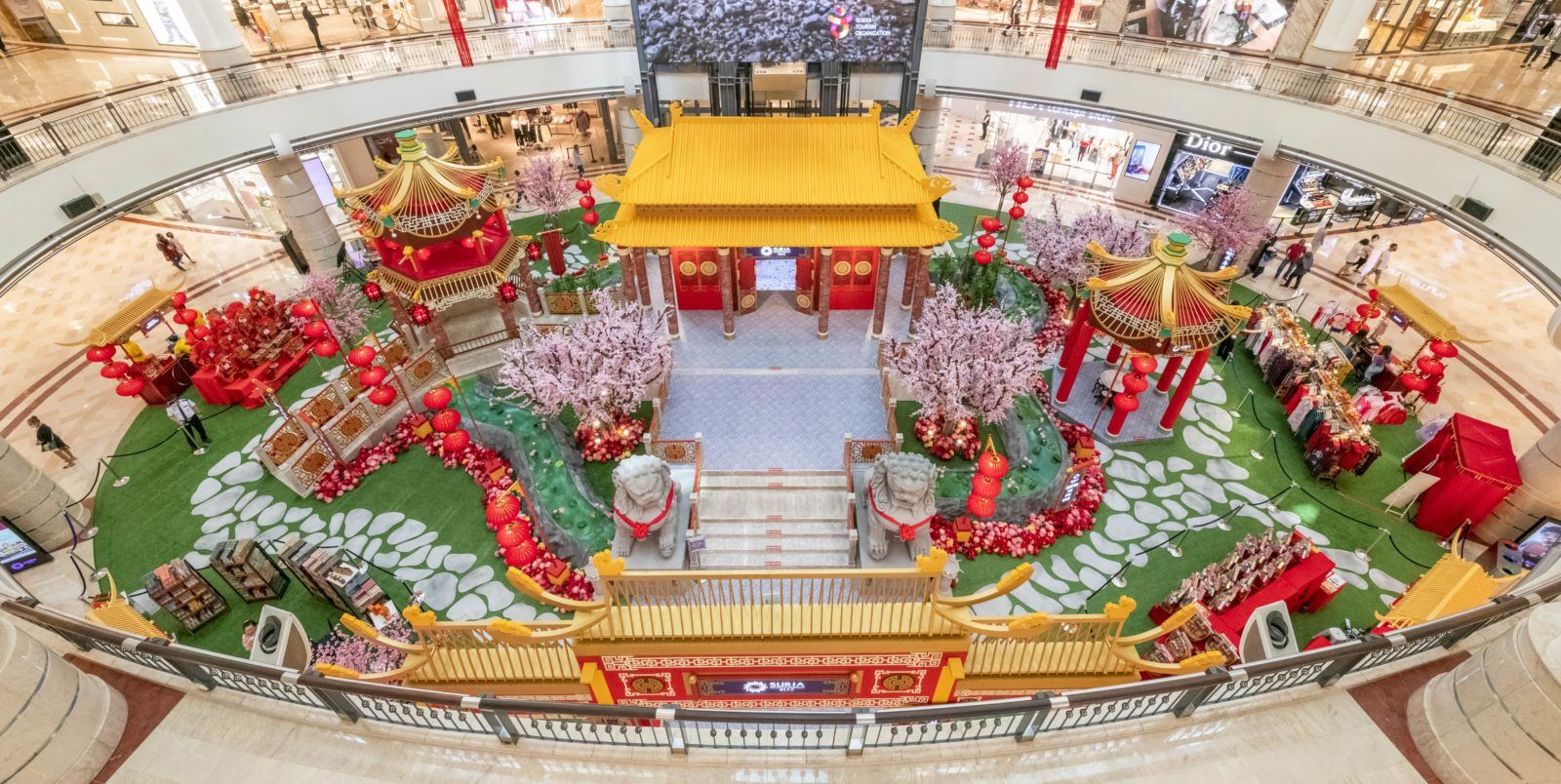 From now until 13th February, immerse yourself in an imperial experience as Suria KLCC transforms its Centre Court into a royal palace.

Taking inspiration from the beautiful garden landscapes surrounding imperial grounds, the Centre Court of Suria KLCC has been transformed into an ancient Chinese palace to welcome the Year of the Tiger. Indulge in the festive mood of Chinese New Year as you take a stroll through the palace grounds and visit all the Instagrammable corners of the mall.

“After a lapse of more than two years, we are pleased to bring back cheer and gaiety not just to the centre court of our malls, but also our broad range of stakeholders, such as retailers, customers and the surrounding community,” says Andrew Brien, Executive Director of Suria KLCC Group. “Chinese New Year is a great time to wish everyone well, as this comes with the promise of a better year ahead for not just the group, but also the country.”

Suria KLCC’s Shoppers Reward Programme rewards you with an RM100 Suria KLCC shopping voucher and a set of Suria KLCC Red Angpow Packets when you spend at least RM1,500. Those who spend a minimum of RM3,000 will be rewarded with an EP YAYING Scarf worth RM999 apiece, along with EP YAYING cash vouchers worth RM168.

From the Centre Court of Suria KLCC all the way to Level 1 of Ramlee Mall and major entrances, you will be encircled with decorations befitting an ancient Chinese palace, set within a glorious period of Chinese history known for its progress and innovation — a time widely celebrated as the golden age of cultural advancements.

The palace setting has been meticulously recreated while paying attention to the finest details, such as the placement of stone-carved imperial guardian lions, garden pavilions eminent in traditional Chinese architecture, a lotus pond, beautiful hanging red lanterns, the iconic pink cherry blossoms, as well as intricate landscaping that’s perfect for a photo op.

Even more photo opportunities come in the form of light shows and motion sensor projections that will delight the senses, which can be triggered by standing near some interactive exhibits around the mall. When triggered, the projectors will display visuals of flowers inside the Palace at the Centre Court to herald the arrival of Spring in the northern hemisphere.

You’ll be able to find Malaysia’s tallest pagoda replica just outside of the mall at the Esplanade KLCC, standing at 70 feet tall. From now until 13th February, you’ll want to get the chance to snap pictures with this majestic structure that can be enjoyed from various vantage points in and around the mall.

Not forgetting, of course, the traditional Lion Dance to complete the festive experience, which will be held at Centre Court; as well as the Acrobatic Lion Dance held at the Esplanade KLCC every Saturday from now until 30th January.

Over at Alamanda Shopping Centre in Putrajaya, you’ll get to enjoy the same festive vibe from now until 6th February, with the mall decked in themes from the Chinese Royal Palace. An abundance of cherry blossom trees in the Centre Court are also beautifully curated to provide an air of festivity, while the North and South wings are adorned with bright red lanterns.

On top of having acrobatics and wushu performances, there will also be a chopsticks contest to test your ability to pick peanuts, in which the winners will receive a RM30 Alamanda Fashion voucher.

The Mesra Mall in Kemasik, Terengganu will also feature a variety of Chinese New Year performances such as the acrobatic lion dance and drum performances, along with the special appearance of a Face Changing artist and the God of Prosperity at the Centre Court.

Along with the campaign that runs until 2nd February, those who spend at least RM350 at any specialty stores within the Mesra Mall will be rewarded with a RM20 shopping voucher.

Chinese New Year Suria KLCC Festive season rewards programme imperial palace
Puteri Yasmin Suraya
Brand and Partnerships Writer
As a literature buff, Yasmin has a deep love for fiction and poetry. When she’s not writing or café-hopping, she enjoys binge-watching period romances, (badly) belting out show tunes, and curating Spotify playlists to match her mood for the week.
Sign up for our newsletters to have the latest stories delivered straight to your inbox every week.