Home > Style > Fashion > 5 most photogenic boutiques to visit in Europe

5 most photogenic boutiques to visit in Europe

Gazing up at the Eiffel Tower post-baguette, or soaking in the grand opulence of Duomo di Milano before devouring slices of thin-crusted margherita pizzas are romantic European experiences that one is bound to indulge in when visiting Paris and Milan. Yet beyond these timeless locales, there exist beautiful boutiques worth taking detours for.

In case you don’t already know this: One doesn’t need to invest in the goods hanging on the rails or displayed on the racks to take pleasure in visiting stores of fashion’s best-loved labels. That’s right. It is hard to admit, but more often than not, what we need is visual retail therapy, sans the unnecessary mile-long credit card bill.

The great maisons have long considered their storefronts as tangible extensions of their brands’ core vision and values — and when the furnishings and concept are as remarkably well-designed as their sartorial offerings, window shopping is no longer solely made up of lamentations over not checking off enough items on your covet lists. It becomes a respite in and of itself; an activity to look forward to in your travel itinerary.

From the surgical tables of Balenciaga to the plush velvet splendour of REDValentino, we curate 5 of the best boutiques for your next Europe circuit. 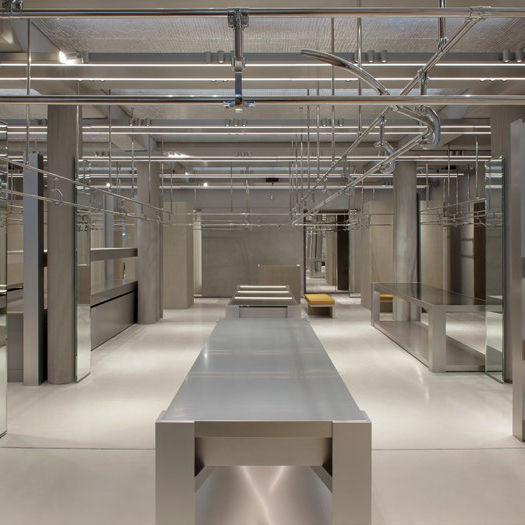 Ever since Demna Gvasalia took on the reins of Balenciaga two years back, revolutionary change has been afoot. It is as palpable in the revered boutiques as it is in each season’s offerings. Case in point: The Rue Saint Honoré flagship, which unveiled a new look in March this year; a first under Gvasalia’s creative direction.

And it is everything we expected from the reinvented Balenciaga. The space swells in a clinical atmosphere with exposed industrial concrete as walls and surgical aluminium as display tables. Rails are made from the same conveyor belts as those utilised in production at the label’s manufacturing headquarters in Italy, while the ceiling is covered in aluminium foil, calling to mind Andy Warhol’s silver factory. 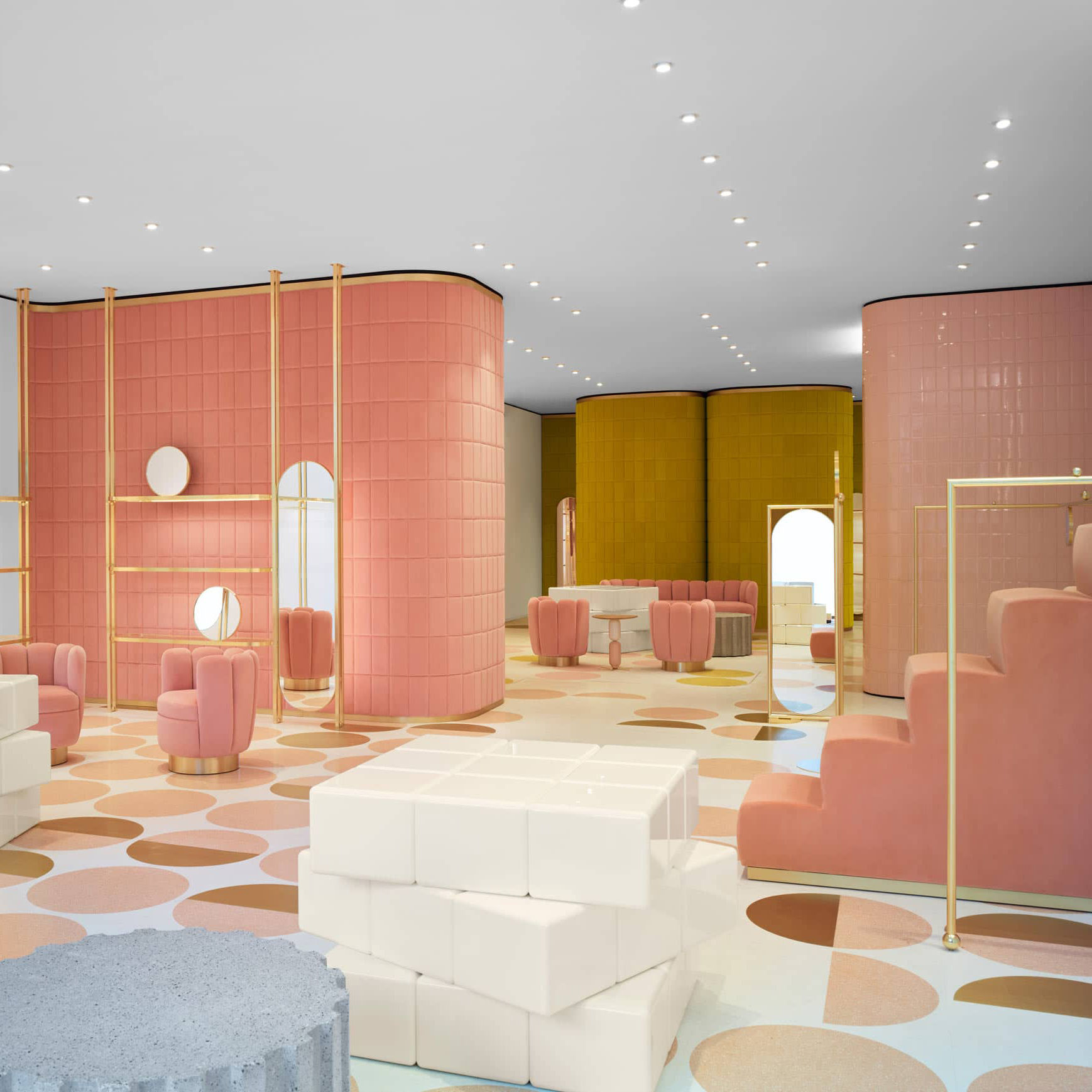 If you find the millennial pink velvet galore a tad familiar, that’s probably because you’ve come across images of or paid a visit to London’s hippest tea room, Sketch. Both spaces are designs of architect India Mahdavi. During the planning stage, Valentino’s Pierpaolo Piccioli and Maria Grazia Chiuri (this was prior to the latter’s departure to helm Dior) mandated Mahdavi to create a world revolving around their idea of the REDValentino girl. “She’s young, she might be an aristocrat, but she might be rebellious,” Mahdavi recounted to Dezeen. 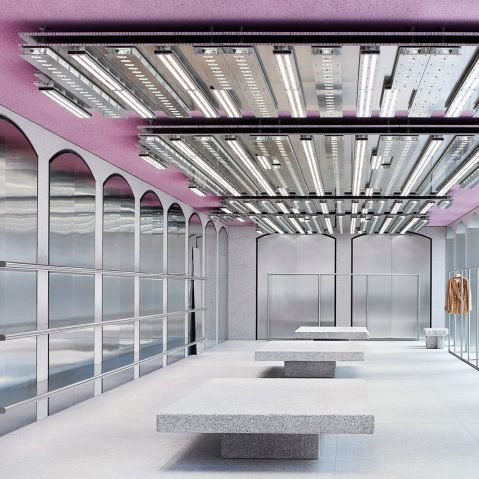 Pink is clearly having its moment. Newly opened in June, Acne Studios has added to its roster of architecturally acclaimed retail spaces with a pink-ceilinged flagship situated among Piazza del Carmine’s designer shops and galleries. “It took five years to find the perfect place for us in Milan,” said creative director Johnny Johansson. “I am so happy that we waited, because the Piazza del Carmine has the exact sense of individuality and community that I like.”

Housed within a pre-existing Italian building, the boutique is a curious old-meets-new spectacle from afar with its exterior half untouched, and half sleekly refurbished the Acne Studios way. Step inside, and it gets more interesting: Granite sourced from a local quarry in the Baveno region is moulded into benches that may get mistaken for ancient stone monuments. The brand’s signature Scandi tropes take on the forms of neon strip lighting and stainless steel, balancing the Italian grandeur. It’s quite something. 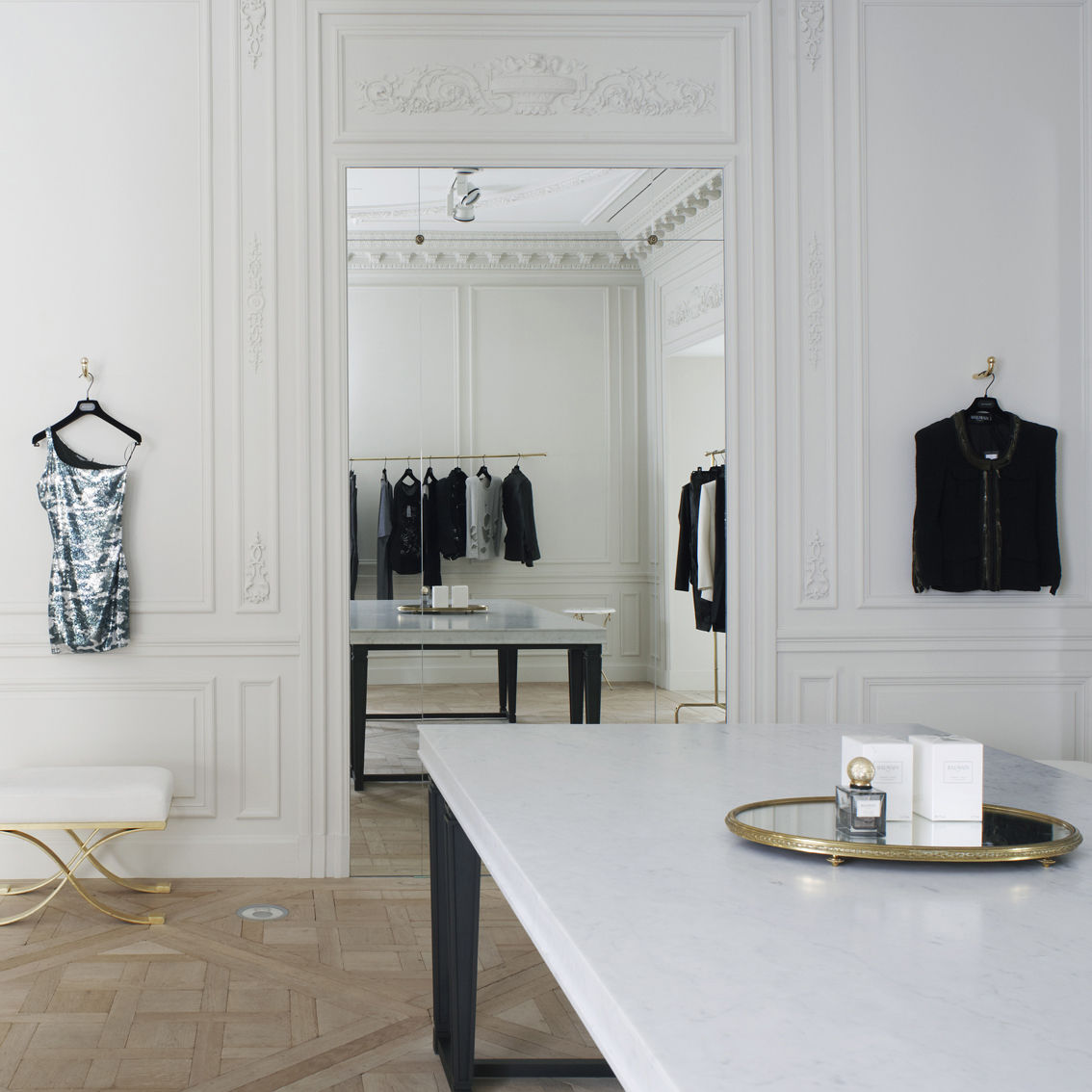 Residing at number 44 on the Rue François 1er, the historic edifice that is now Balmain’s flagship was once the couture atelier of founder Pierre Balmain. The tight space of the townhouse was initially impractical for a team of 24 running the intricate business of couture. Throughout the years, transformations took place to accommodate Balmain’s burgeoning role as the city’s leading post-war couturier.

Then in came architect and decorator Joseph Dirand in 2009. Dirand stripped back several late-twentieth century ornaments and unearthed its former spirit of a private residence. The architect highlighted how the paring back benefits Olivier Rousteing’s glitzy interpretation of the brand: “I think some expected an interior that would be a much more literal reflection of the house’s latest clothing and accessories collections. But I believed that by placing those designs in the unique historical context of both the house and its founder, I could best highlight Balmain’s current modern, sexy and luxurious offerings.” 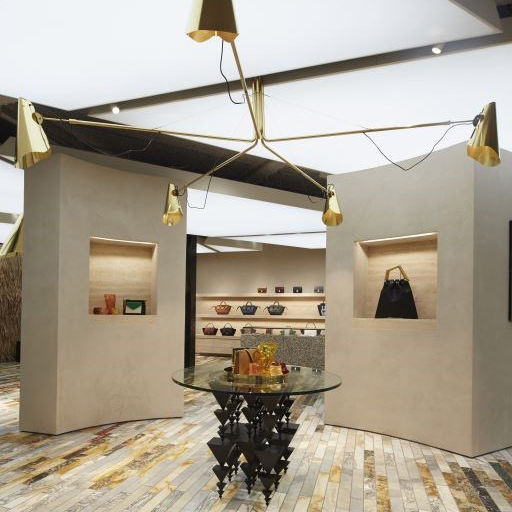 London’s Céline flagship is irresistibly perfect. Especially so, if you happen to be a Philophile. Creative director Phoebe Philo insisted to have the space impeccably done. From parquetry inlaid with 6,000 multicoloured semi-precious stones made of 12 varying stone types the likes of malachite and sodalite, to the assortment of commissioned objects — luminescent gold lamps, a plush day bed and jewellery vitrines all crafted by Danish artist Thomas Poulsen, or fondly known by the moniker FOS — not one inch has been left unconsidered.

These luxe details are evened out with an otherwise largely minimalist space, with Philo’s signature off-kilter touch thrown in for good measure. The creative director has long made a name for herself for blurring the lines between the achingly chic with the esoteric. And the best way to truly understand her famed paradoxical credo, is to swing by and have a glimpse of the store Philo proudly dubbed as her “local” when in town.