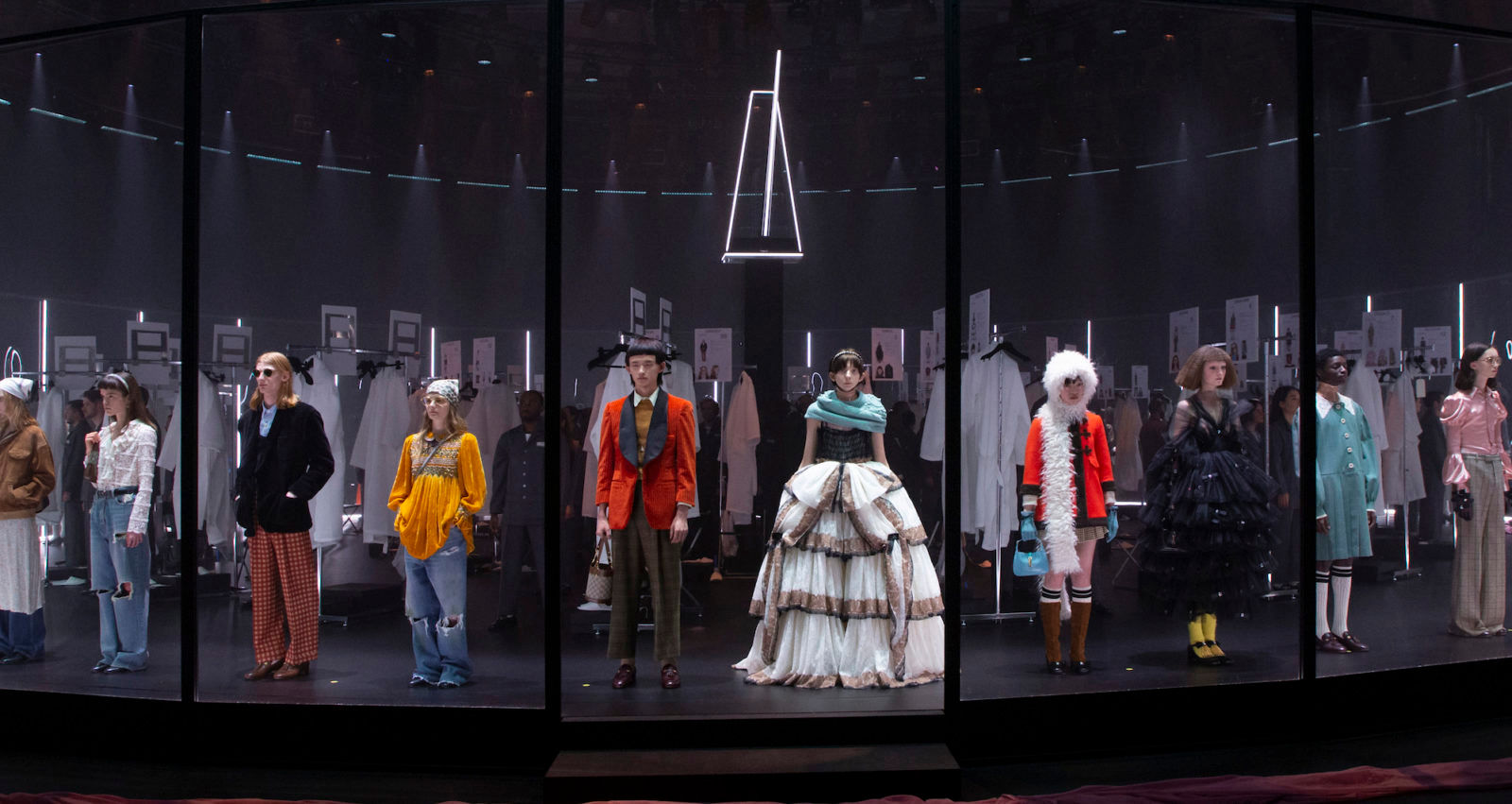 The catwalk isn’t what it used to be, and the recent Gucci FW20 show is a testament of that.

If you asked Alessandro Michele, he would tell you that it is a sacred ceremony. Or a ritual, as he titled Gucci’s Fall/Winter 2020 show at Milan Fashion Week. In his handwritten notes for the show, Michele waxed lyrical about the power of a runway show, likening it to “a magic event bursting with enchantment.”

Yet conjuring such magic requires a coven, not just a single wizard. Every season, Michele gathers his circle: stylists, tailors, makeup artists, hairstylists and assistants, all just as devoted as him to bringing Gucci’s shows to life. And like the witches of Macbeth, they collectively prophesise our fates. Here are the Gucci logo bags you will carry all season or the sneakers you will obsess over for the next six months. Sure, the clothes are brightly patterned and maybe a little old-fashioned, but you will fall in love with them. Everyone will.

This season, Michele the magician chose to reveal his tricks. He showed guests what — and who — it takes to make a fashion show possible. “I decided to unveil what lies behind the curtains,” wrote Michele. “May the miracle of skilful hands and holding breath come out of the shadows.”

So they did. As guests arrived at the show at the Gucci Hub, they were led straight into the backstage area where makeup artists and hairstylists were busy getting the models ready. They were free to mingle with them, as well as Michele himself, who was walking around. It was an intimate scene straight out a fashion documentary — think Unzipped (1995) — that continued right onto the show itself.

Instead of a runway, the show was staged on a large, rotating round platform resembling a carousel. Its large windows revealed more behind-the-scenes action: models getting dressed into their looks with the help of stylists, tailors giving their outfits a few finishing touches. When they were ready, the models walked up to the windows, one by one, and stood stiffly as dolls.

It was an act of defiance. Traditional runway shows entail models walking through guests to show off their outfits. Gucci’s, however, made guests wait for the revolving stage to circle back their way to get a good look at a model. Instead, what they could see clearly most of the time was the hive of activity in the background — and the people bringing Michele’s vision to life.

As if to emphasise their efforts, the show was accompanied with a triumphant classical score that peaked as the show finally came to a close. The models filed out of the box and the stylists took their place. Michele’s message was clear: these people are just as worthy of the audience’s applause as the models themselves.

The whole experience would have been a humbling one for the celebrities and influencers who sat front row — people who wouldn’t see a fashion show as anything more than a 10-minute spectacle for their Instagrams.

And yes, spectacles are what Michele has delivered, season after season, since he joined Gucci. The Italian designer’s own celebrity status has been both a blessing and a curse, the latter because he is now burdened with the worldwide expectation of putting on an unforgettable show, three times a year. (That’s on top of the mid-season and capsule collections that he designs for men and women.)

Any designer in his position — save the late, famously workaholic designer, Karl Lagerfeld — would tell you that they never have enough time. The giant ticking metronome that hovered over the stage at Michele’s latest Gucci show seemed to nod to that fact.

It was profound, then, that Michele chose to kick off Milan Fashion Week the way he did. People watch fashion shows to be entertained and enthralled by beauty in all forms: the models, the designs, the sets. It can all sound very superficial, but isn’t that exactly how you could describe the world of cinema?

At the Gucci show, Michele made that comparison himself by playing a recording of Italian director Federico Fellini. Fellini spoke of his life being a circus, one that he could only live through with the help of his film crew and their love for cinema. It is that same circus that Michele is the ringmaster of. And while there are no awards like the Oscars or the Golden Globes to recognise the behind-the-scenes efforts of his large team, Michele celebrated them in his own way: with a well-deserved standing ovation.

Gucci Milan Fashion Week alessandro michele MFW Fall 2020 FW20
You might also like ...
Style
Volkswagen and Tarik Jeans are saving the Malayan Tapir
Style
Your next Rimowa suitcase could have a customisable LED display
Style
All the outstanding looks from day one of Milan Fashion Week
Style
Raf Simons presents his version of the Dr. Martens Original 1460 boot
Lifestyle Asia
Here's where you can read the latest news and stories from Lifestyle Asia and our sister titles PrestigeOnline and Augustman, curated from all of our editions in Hong Kong, Singapore, Kuala Lumpur, Bangkok and India.
Luxury
Sign up for our newsletters to have the latest stories delivered straight to your inbox every week.