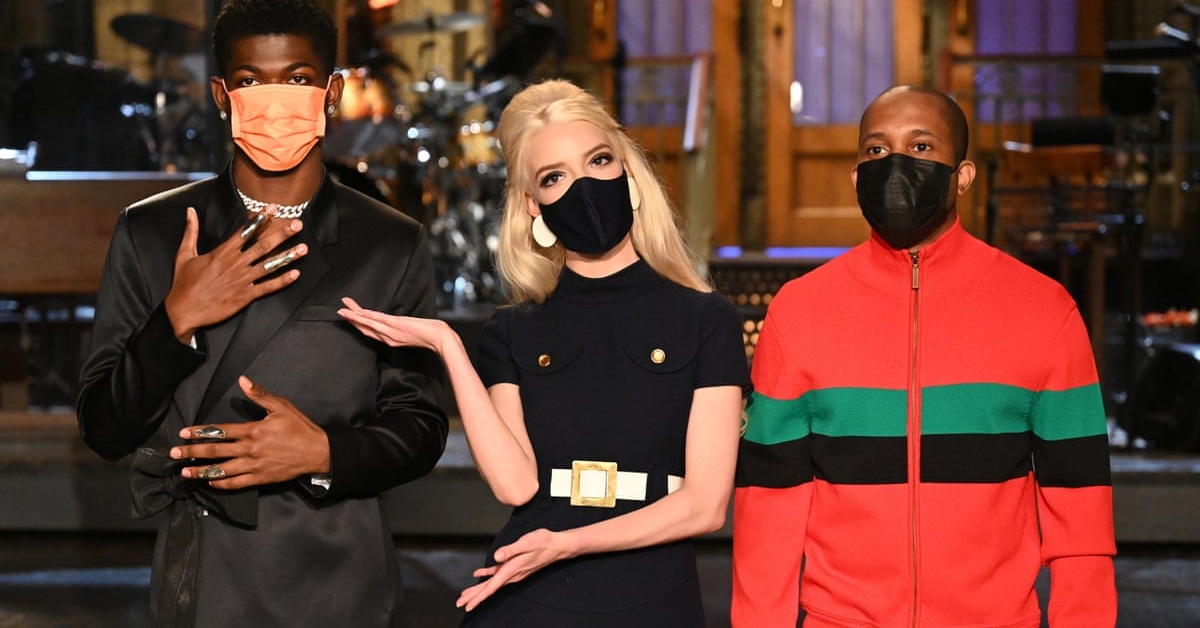 The question was posed by Pierre Bergé, the late French fashion tycoon who helmed the business half of Yves Saint Laurent’s empire. In 2000, he had a point: we were wearing low-rise jeans and tracksuits instead of the retro-futuristic fashion dreamed up by André Courrèges and Pierre Cardin. Fast forward to 2021, though, and we’re wearing all of the above.

Cardin’s pagoda jackets were recently revived by Balmain and Balenciaga. Richard Quinn’s Moncler collection, as worn by Dua Lipa and Celine Dion, owes much to the Space Age silhouettes created by Cardin and Courregès. Ariana Grande has the latter to thank for her favourite go-go boots, as well as the ’60s-inspired outfits she flaunts in her music video, Positions. And so does Anya Taylor-Joy, whose wardrobe for The Queen’s Gambit consisted of several Courregès pieces. The Golden Globe-winning actress has even made her SNL debut with a vintage Courregès dress from the personal archive of her stylist, Law Roach.

You already know Pierre Cardin — the “Licensing King” had his name on everything from luggage to lingerie, from perfumes to pottery. But his contemporary Courregès remains much lesser known, and his name doesn’t quite roll off the tongue. (Here’s a handy video for anyone who isn’t a native French speaker.)

Below, we dive into his contributions to fashion (many of which are in your wardrobe now), how he shaped ’60s fashion, and how his influences live on today.

From buildings to Balenciaga

André Courrèges was born in 1923 in Pau, a city in southwestern France that is filled with lush valleys, spectacular mountains and historic castles. Despite growing up in the sort of countryside that most people dream of retiring to, Courrèges had a thing for architecture. He studied civil engineering (just like fellow fashion designer Virgil Abloh), before serving as a fighter pilot for the French Air Force in World War II.

In 1951, he arrived in Paris to become a designer. He was taken in by the master of haute couture, Cristóbal Balenciaga, whose strong, sculptural shapes spoke to Courrèges’ sensibilities. Like Hubert de Givenchy, Courrèges learned the art of tailoring at the couturier’s hallowed atelier, where he worked for 10 years. It was also there that he met his creative collaborator and future wife, Coqueline Barrière.

In 1961, with Balenciaga’s blessing and financial backing, Courrèges and Barrière opened the Maison de Courrèges in Paris. They marked their haute couture salon with a logo featuring the initials “AC” — “André and Coqueline”.

The father of Space Age fashion

Maison de Courrèges opened just as the space craze took hold on the Western World. The Soviet Union and America had launched their great Space Race to get a man on the moon. In the wake of two world wars, the future suddenly seemed full of possibilities, and it was reflected in the ambitious designs offered by everyone from artists to architects, from filmmakers to fashion designers.

When Courrèges unveiled his Space Age collection in 1964, his career took off. It was unlike anything seen in haute couture before: instead of dresses that constricted or clung to the body, Courrèges introduced A-line minidresses that freed women of the need for girdles and bras. Double-breasted coats, which were buckled with belts and flared from the waist down, allowed for easy movement. So did the miniskirts, which Courrèges, along with British designer Mary Quant, is credited for inventing. The collection even included trousers, which were illegal for women to wear in ’60s France.

Compared to the bubble skirts and ballooning gowns of Christian Dior and Balenciaga, Courrèges’ clothes resembled triangles, trapeziums and rectangles. His radical designs held their distinctive shapes thanks to the use of stiff, gabardine fabric, especially in the colour of white (“the colour of the moon”). And they were accompanied by accessories for fashionable astronauts, such as white gloves, helmets, goggles, and flat, block-heeled boots — the world’s first “go-go” boots.

The models, too, looked out of this world. They were not the bird-like dames that mirrored traditional haute couture’s clients; instead, Courrèges’ “moon girls” were young and athletic, skipping and dancing to the music at his revolutionary fashion show.

It was that show that cemented Courrèges’ place in fashion in the ’60s. He was celebrated along with fellow French designers Cardin and Paco Rabanne as fashion’s “three musketeers” for their futuristic, daring clothes inspired by space travel. And he would find clients in the decade’s icons: Jacqueline Kennedy, Catherine Deneuve, Brigitte Bardot and Françoise Hardy, to name a few.

Courrèges would continue to explore space through the lens of fashion for the rest of the decade. His forward-thinking spirit led him to launch his ready-to-wear line, making his clothes accessible to young women. They would dominate the streets.

Courrèges also began experimenting with fabrics; instead of the flowing silks and heavy brocades of couture’s past, he favoured metallics and synthetic fibres, such as the glossy polyvinyl chloride (PVC). He made designs out of clear plastic derived from vegetable fibres. And he took inspiration from sportswear, creating clothes in stretch fabrics and knits that you find everywhere today.

Yet for all his innovation, fashion moved faster. Courrèges’ moon girls were soon replaced by the hippies, and fashion came back down to earth. The French designer was left behind, and he would eventually retire from his brand in the ’90s. He passed away in 2016, after a decades-long battle with Parkinson’s disease.

The revival of Courrèges

Today, Courrèges’ influence lives on. His designs have inspired the likes of Karl Lagerfeld, Marc Jacobs, and even buzzy designer Simon Porte Jacquemus. “He’s one of the fashion figures who have inspired me the most, alongside Rei Kawakubo and Pierre Cardin,” said the French designer, who admires “his silhouettes, his obsession with circles, but most importantly his playful way of looking at things — fashion with a smile.”

Courrèges’ brand has also undergone two reboots: first in 2015, with designers Sébastien Meyer and Arnaud Vaillant at the helm, and then again in 2021, with Nicolas Di Felice. Felice is sticking to the house codes, while injecting it with a dose of modernity. “It would be bad if it made the girls who own the vintage stuff look outmoded,” said the Belgian designer.

“I want to propose products that are creative but still wearable,” he continued. “I love cutting, so we do a lot of fittings. The clothes should make you look good, and they should be made in a way that respects the environment and good labor conditions. Above all, they should be the type of clothes you won’t want to throw away after six months.”

If Anya Taylor-Joy’s SNL appearance is anything to go by, the timelessness of Courrèges is pretty much promised.

Courrèges anya taylor-joy
Lifestyle Asia
Here's where you can read the latest news and stories from Lifestyle Asia and our sister titles PrestigeOnline and Augustman, curated from all of our editions in Hong Kong, Singapore, Kuala Lumpur, Bangkok and India.
Luxury