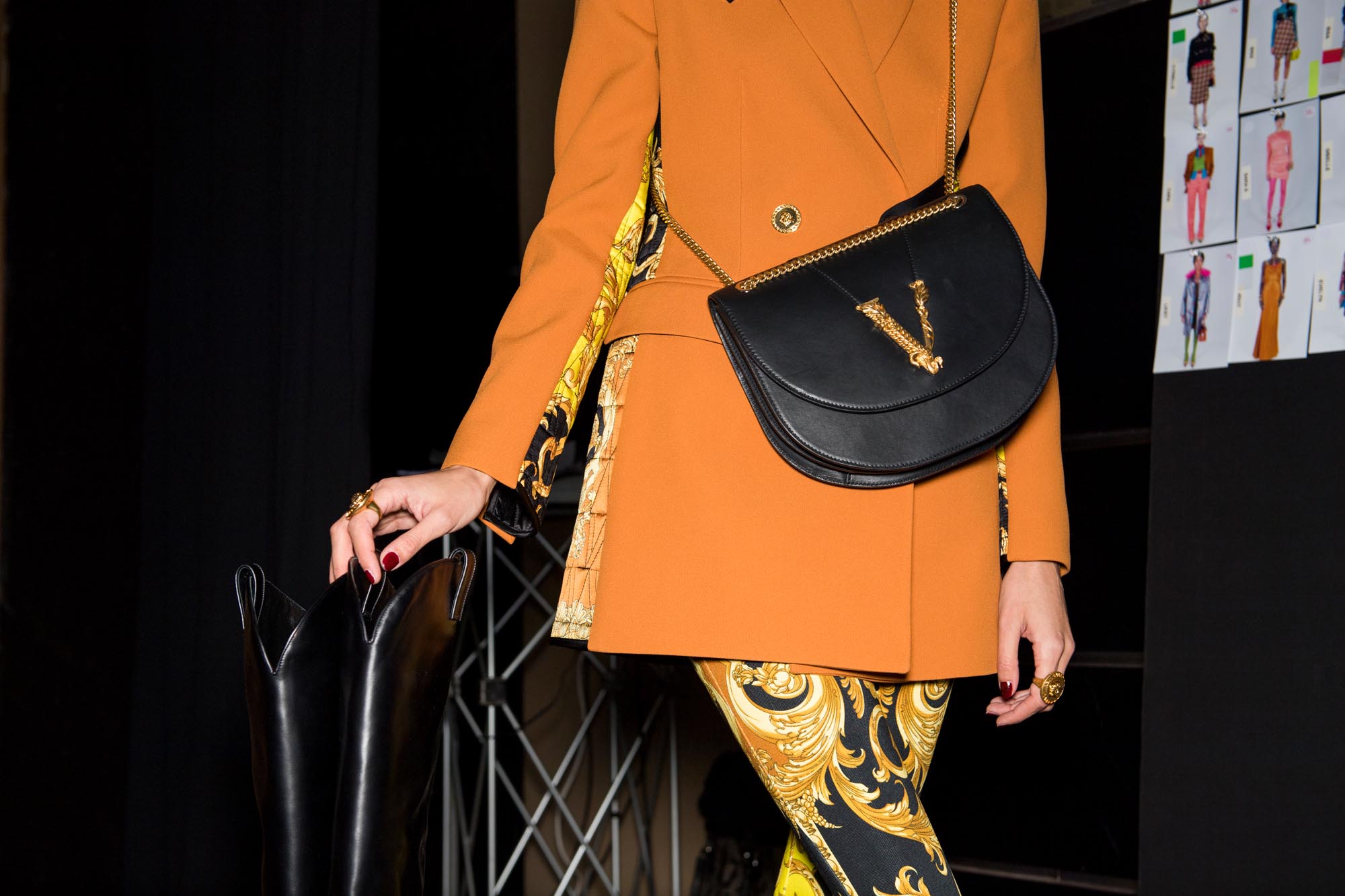 The hype may be buzzing on everything related to SS20 Fashion Week with Milan Fashion Week starting really soon — but here is what’s in-stores right now.

Fashion giants relying on nostalgia is nothing unheard of. Versace‘s FW 2019 was described as ‘a nod to the nineties’, releasing pieces that have references to the house’s past but at the same time incorporating modern touches into the designs — the same goes for its new bag line, Virtus. Its name takes inspiration from the Roman deity, which symbolises strength, courage and character. It’s a tribute to the Versace woman, one who is bold in her choices. The Virtus line comes in many variations: as a tote, top handle, belt, shoulder or evening bag, but one thing remained the same throughout the collection is the central gold-tone metal Barocco letter V that is at the centre.

The Dior Saddle bag has been on almost every figure, fashion icon and celebrity’s arm ever since Maria Grazia Chiuri reintroduced its design in 2018. Kim Jones then gave a slight revamp for the men, while still keeping its recognisable silhouette. Months later, more versions of the saddle bag are introduced and now we’ve come to another form — a backpack. You’ll still be able to spot the iconic 18-year-old silhouette within its design, the saddle-shaped flaps on the front with added shoulder straps of course. It’s made out of 100% leather, complete with a matte black-finish aluminium Christian Dior buckle.

When the artistic minds of Virgil Abloh and Jun Takahashi of the brand, Undercover come together — it’s this. Off-White x Undercover collection consists of a selection of t-shirts, hoodies, zip-ups, athletic shorts, denim, and a waist bag. Jun Takahashi took traditional Off-White markings into his own graphics of what the designers describe as ‘dark matter’. So you’ll be able to spot snaked filled GILAPPLE (which is an iconic symbol of Undercover), hunched skeletons and clawed hands in various colours. The Off-White x Undercover collection will be available in Malaysia on 20th September 2019.

Show off your Malaysian pride with style as Uniqlo collaborates with Bingka KL for UTme. A series of stickers that are very much inspired by our Malaysian food is available for buyers to choose, to create their own T-shirt or tote bag. Love the classic Malaysian breakfast, nasi lemak? Have it on your shirt. Bingka KL also designed Johor’s famous Mee Bandung Muar, Masak Lomak from Negeri Sembilan and Borneo’s kek lapis. The stickers are only accessible via the Uniqlo app and Uniqlo at Fahrenheit 88.

Onitsuka Tiger turns 70 this year (since its launch in 1949), and the brand is celebrating it with multiple collaborations — seven, to be specific, with designers that are popular in Japan and abroad. For its fourth wave that is scheduled to be launch on 23rd of September, it is a collaboration with the designers behind STAFFONLY, Shimo Zhou and Une Yea. The designers brought in their own flair and characteristics into the classic SERRANO. Inspired by classic track and field spike shoes that were popular in 1970s, they’ve also incorporated the theme “Protection” into the design by adding bumpy details.

Dior Versace Dior Homme Off-white fashion obsessions
Jolin Lee
Contributor
Unlike most modern-day millennials, Jolin does not need caffeine or alcohol to power through the day (and night). Her eye for beauty is as sharp as her eyeliner flick, and she can spot your unblended eye makeup from a mile away.
Beauty Fashion Style Jewellery