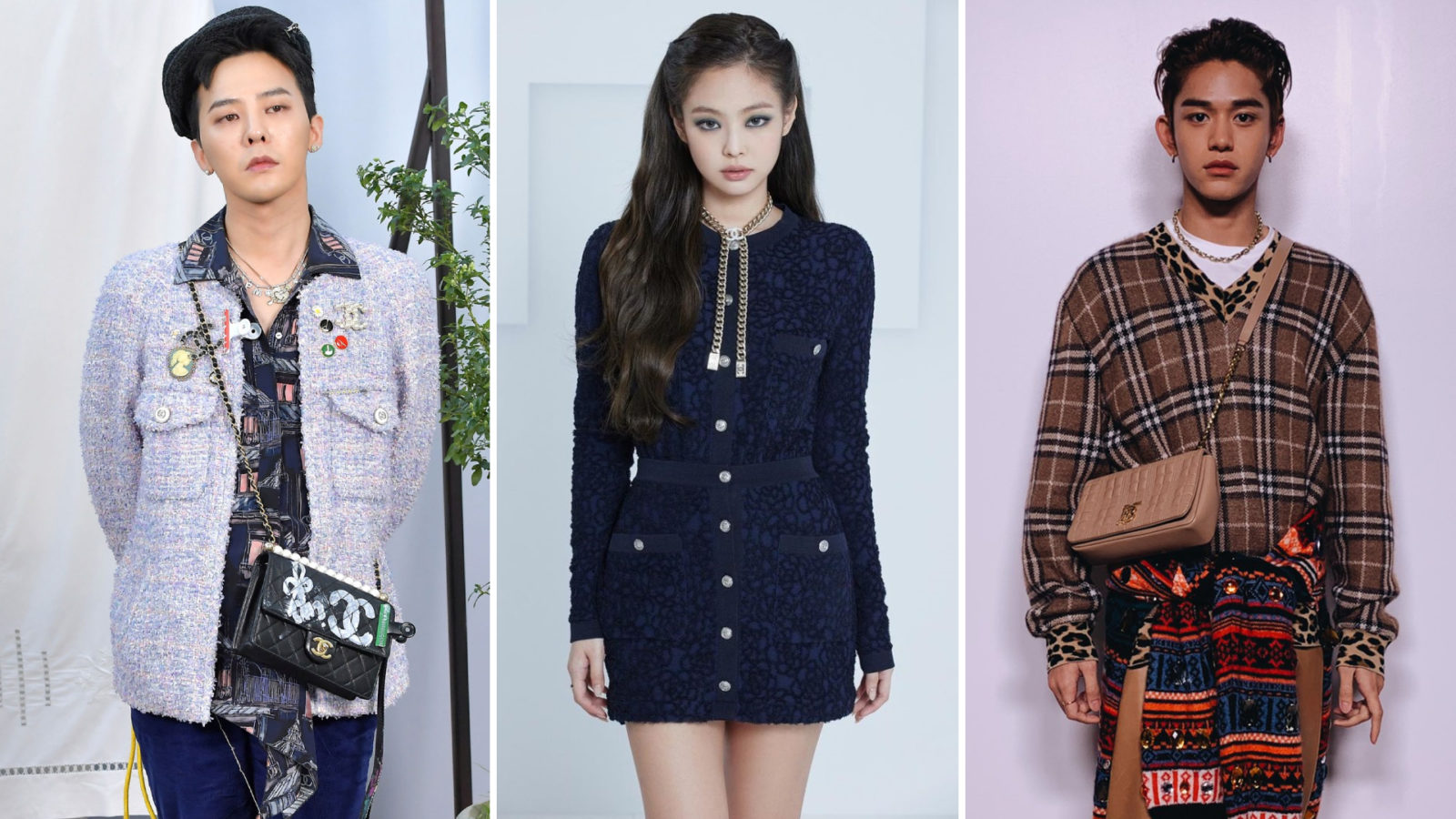 If you are even a little bit clued in to the world of K-pop music, you will know that these stars are as fashionable as they are good musicians. Originating in South Korea in the 1990s, K-pop found popularity sometime in the 2000s and today boasts of a growing number of loyal followers around the world. And it’s not just their catchy tunes that appeal to their ever-growing fan base, it’s also the flamboyant display of high-end fashion.

Anything they do, whether it’s sporting a new hairstyle, make-up or outfits in music videos, live performances, major events and even the airport look, becomes a trend. With such a widespread impact, no wonder musicians like G-Dragon, Kai and Lisa are faces of internationally renowned luxury fashion labels.

Here is a look at some of the K-pop artists who are also making waves in the fashion industry.

Lead singer of the boy band BIG BANG, G-Dragon was the first K-pop artist to be invited to the Paris Fashion Week. When he attended the event in 2015, he had already established himself on the Korean fashion circuit by donning labels like Balmain, Yves Saint Laurent and Givenchy. Capitalising on his fame and well-received sartorial choices, he launched his fashion label, Peaceminusone, the next year. The brand sells everything from clothes to accessories.

G-Dragon has been a Chanel house ambassador since 2017. He left an impression with his presence at shows such as Chanel Spring/Summer 2018 in Paris, which he attended wearing a black bouclé sweater from Chanel’s Fall 2017 women’s collection and paint-splattered Dr. Martens with a colourful patched over-the-shoulder bag. Recognising his influence on the Korean market, Chanel featured him on the brand’s official website for its Spring/Summer 2020 Haute Couture show.

He became the first Korean musician to collaborate with Nike when they launched the Air Force 1 Para-Noise — a black sneaker with an embroidered daisy on the tongue — and followed it up with a white Para-Noise the following year. A unique feature on both shoes is the hidden artwork by the K-pop idol which is revealed only when the outer leather peels away over time.

In 2020, he returned to Paris Fashion Week to support We11Done — the label run by his sister Dami Kwon and Jessica Jung. He turned heads with his giant messenger bag that hung around his face like a muffler which was worn over a pale blue suit with peace sign brooches.

Lisa of the band Blackpink is the most followed K-pop artist on Instagram with 47.6 million followers, who love her posts on fashion, beauty and brands as much as her performances. Needless to say, the influence she exerts is ginormous.

She is a global ambassador of Celine since 2020 and fronted the Celine Essentials campaign becoming the first Asian performer and K-pop star to do so. Known for her style statements, Lisa is a regular at fashion shows. She also attended Celine’s Spring/Summer 2020 showcase in a Hedi Slimane white turtleneck and glittering long skirt (pictured). The same year, she joined hands with three more fashion brands, including Filipino clothing brand Penshoppe — joining the likes of Kendall Jenner, Bella Hadid and Zayn Malik.

She also became the first K-pop star to be a global brand ambassador of Canadian cosmetics company MAC. Already on the digital campaign of the iconic Serpenti and BZEROONE collections of Bulgari, Lisa was named an ambassador of the luxury watchmaker as well.

Along with fashion labels, the Thai-born rapper has endorsed brands such as Samsung, Vivo and Moonshot too. Lisa’s popularity has led to her becoming a mentor on the Chinese survival show Youth With You, with which she has remained associated since last year.

The lead singer of the boy band Exo, Kai is one of Gucci’s ambassadors and is the first Korean male celebrity chosen by the brand as the global icon for Gucci Eyewear.

A year before he became the brand’s ambassador, Kai was the cynosure of all eyes at the Gucci Spring/Summer 2018 Resort show at Arles in France, where he wore Alessandro Michele with a crystal fringe headband from the men’s Fall 2018 collection.

When GQ UK released its 50 Best Dressed Men of 2020, Kai, who was ranked seventh, was the only K-pop artist on the list. He also appeared in GQ Korea’s March 2020 issue wearing a Gucci suit and a long coat from the brand’s 2020 Spring/Summer collection. Kai attended Gucci’s Fall 2020 Menswear show at Milan Fashion Week and was photographed with fellow fashionista Jared Leto.

The association between Kai and Gucci has become so significant in a short time that the Italian label announced a capsule collection inspired by him in 2021, a first for a Korean celebrity.

Kai is not all about just clothes. In 2020, he also became the first male muse for American cosmetics brand Bobbi Brown.

Blackpink’s Jennie has had such an influence on fashion with her association with Chanel that she is referred to as “Human Chanel” by the media in Korea. The face of the French fashion brand since 2018, she is a regular at its shows and sports the brand’s dresses even as everyday wear. In 2019, she unveiled Virginie Viard’s Chanel Spring/Summer 2020 collection in Paris wearing a purple sweater, baby blue bow-tie crop top and denim mom jeans. Even her two adorable dogs, whose pictures she posts regularly on her official Instagram account, have been seen wearing the brand.

Other than Chanel, Jennie is also seen in outfits by luxury labels such as Gucci, Yves Saint Laurent and Marine Serre. For her song Solo‘s music video, she donned the creations of 20 different high-end designers including Off-White, Burberry, Miu Miu and Richard Quinn. And, apparently, the sparkling hairpins she wore during the promotion of the song triggered a hairpin craze in South Korea.

Wearing a British classic house check shirt from Burberry’s Spring/Summer 2018 collection, the Winner rapper and his bandmate Hoony were part of the front row of the label’s show in 2017. Like other K-pop stars, he quickly became a sought-after name in fashion circuits and was hand-picked by designer Virgil Abloh to walk the Paris Fashion Week in 2019 for Louis Vuitton’s Spring/Summer 2020 collection. His walk down the cobbled streets of Place Dauphine in a pastel-coloured suit cemented Mino’s status as a fashion icon.

He attended the Seoul launch of the Thomas Burberry Monogram collection wearing a ‘Why Did They Kill Bambi’ shirt which is known for its deer print and marked designer Riccardo Tisci’s debut with Burberry in 2018. Mino has also been seen in outfits by JW Anderson, Ralph Lauren Polo and Dolce & Gabbana.

Not just a music star, Mino is a painter and philanthropist as well. In 2018, he donated his entire modelling fee from Balenciaga to the World Food Programme (WFP).

After the GOT7 rapper launched his single Fendiman in 2018, luxury fashion label Fendi signed him as its ambassador describing his talent, uniqueness and innovative style as “perfectly connected to Fendi’s spirit”. And soon, Wang released a Fendi capsule collection. The Chinese artist, who was a fencer before foraying into music, also performed the song at the brand’s Autumn/Winter 2019 show in Milan. His popularity on the stage and in the fashion world has seen him become the face of Cartier and Armani in 2020.

The same year, he launched his fashion label Team Wang Design, a streetwear apparel line for which he is the creative director and designer. The first collection, named Cookies — The Original, had pieces such as hoodies, tops and tracksuit bottoms. In 2021 he launched a second collection, Cookies — The Velvet, which included jackets, t-shirts and several accessories. All merchandise is available in black, Wang’s favourite colour.

Among many other things, Sehun, a member of the famed EXO, is particularly famous for his narrow, chiselled jawline.

At the 2017 and 2018 Louis Vuitton shows in France, Vogue named him the best-dressed man in attendance. While he wore a Vuitton black leather bomber jacket over a colourful shirt in a kaleidoscopic print in 2017, he donned different looks at the brand’s Resort 2019 show in Saint Paul de Vence including a mohair sweater with bold red-and-white stripes for the main event. He was also present at the opening of Louis Vuitton Maison Seoul in 2019.

Though he occasionally wears colourful dresses like other K-pop stars, Sehun is known more for his almost minimalist fashion sense in which colours such as navy, white and grey are more prominent than brighter hues.

A member of WayV, supergroup SuperM and NCT’s sub-unit NCT U, Lucas Wong is one of the topmost K-pop stars currently active in the music scene. At just 22, he has walked for major Korean fashion brands. He made his runway debut as a model for KYE, Charms and Kappa at the 2019 Spring/Summer Hera Seoul fashion week in 2018. At the event, he wore a KYE-patterned sweater with a pair of light blue trousers, a simple tee matched with jeans and a classy blue suit with a bucket hat among other ensembles.

He has appeared at Burberry events in China and attended its Spring/Summer 2020 show in London. Besides Burberry, the Hong Kong-born star has smartly presented himself in Converse, Off-White, Supreme, Balenciaga and Alexander McQueen. Wong has been seen sporting both bold prints and simple ones with élan and is known for his outstanding fashion sense even when he steps out for a casual walk.

Luxury fashion brands, its muses, and their enduring relationships