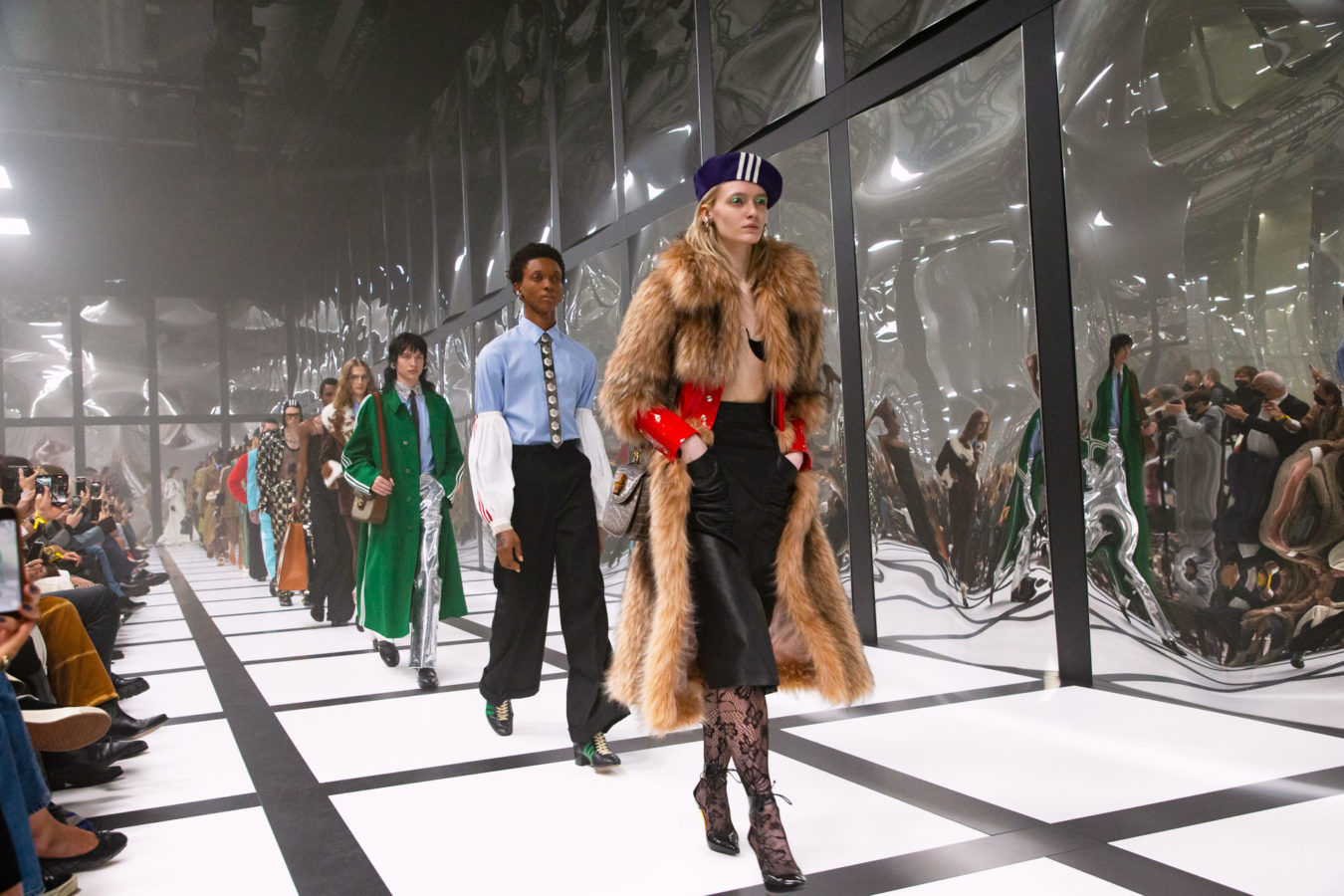 Milan Fashion Week returned on February 23rd. This season, we are seeing both heritage and young Italian brands embracing innovation and pushing their artistic geniuses to the new heights of excellence.

Check out our highlights from Milan Fashion Week Fall/Winter 2022:

Seems like Gucci’s Alessandro Michele pulled a late Virgil Abloh not only in paying homage to his artistic choices but in referencing his own creative milestones. The collection’s message centred around mirrors – not literally – but in the ideology that mirrors represent. There were a plethora of men’s suits in a range of new silhouettes, all of which shared a bottom-heavy denominator. The show-stealers, though, were the items from the house’s collaboration with Adidas, including the white Victoriana nightgown dress, corset inserts beanies and, of course, ginormous tote bags.

Every fashion connoisseur, from the lands far and wide, was anticipating Matthieu Blazy’s first show for Bottega Veneta. Instead of completely rejecting the aesthetics of his predecessor, Blazy decided to build upon Daniel Lee’s signature silhouettes and textures. Spiky fur coats became bulbous, accessories switched padded silhouettes to finely woven intrecciato leather. Not only did the collection read as an expression of natural evolution from Lee’s reign, but also as a homage to the movement itself, with dynamic details permeating every look, be it fringe hems, pleats or waist-tied sweaters.

Once again, Versace brought sex back to Milan fashion week. Donatella Versace reinvented the suit, the corset and destroyed the canons of power dressing to allow the new style vocabulary to emerge from its ashes. The show saw a generous usage of corset boning – in dresses, bodysuits, vests and even crop tops; the neon-heavy colour palette migrated into the Autumn 2022 collection from previous seasons, alongside the evolved iterations of the new Versace monogram. PVC leggings returned to Versace’s runway as well, bleeding into heels or appearing under glossy puffers.

Fendi’s Autumn 2022 collection was all about lightness – whether derived from menswear or women’s. The silhouettes were, above all, referential. Soft tailoring, executed to evoke the styles of the early aughts – subtly – was interspersed with sheer slip dresses and fur-trimmed skirts in leather. Kim Jones summoned the spirits of Karl Lagerfeld and the personal style of Sylvia Venturini Fendi herself to help him construct the looks, most of which stemmed from the archives. Jackets adopted a range of cuts from cropped to elongated ones, every single one boasting soft waists and rolled-up sleeves.

In an example of the perfect artistic collaboration, Miuccia Prada and Raf Simons invented the white tank top. The Prada version of the essential with the house’s triangular logo stamped on it will undoubtedly dethrone the taffeta minis as the most-adored piece by the Instagram darlings. The collection saw heavy, boxy coats and shearling jackets paired with tiered skirts and patent leather flowers appear on exaggerated bomber jackets.

With his Autumn 2022 collection for Moschino, Jeremy Scott expressed a desperate cry for opulence. The furniture-resembling pieces might mislead a casual observer into interpreting the collection as some sort of Beauty and the Beast couture. In reality, the range was more nuanced, with the set inspired by Stanley Kubrick’s ‘A Space Odyssey’, hussarian suits, sculptured velvet gowns à la early Schiaparelli and tunic-inspired flapper dresses.

In its Autumn 2022 collection, Emporio Armani embraced heavy militarisms. Men and women strutted down the runways in tall combat boots, berets and 3-piece suits resembling 1930s European workwear; the perfectly calibrated palette of greys adopted bursts of pink, red and green. Mr Armani has always been interpreting major world events through fashion – this time around – his collection blended formalwear with glitz and glam of the 1920s nocturne, as if compelling its wearers and admirers to dress up more.

Milan Fashion Week milan fashion week fw22 Fall winter 2022
Gennady Oreshkin
Style
Sign up for our newsletters to have the latest stories delivered straight to your inbox every week.