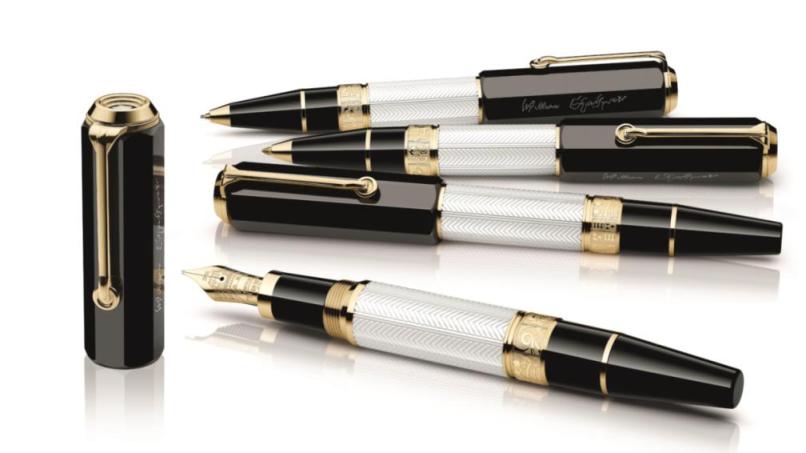 Every year since 1992 has seen Montblanc pay tribute to some of the greatest literary icons in history with its limited edition Writers Edition writing instruments. Some of the writers to receive this tribute include George Bernard Shaw, Virginia Woolf, Franz Kafka and Leo Tolstoy. This year, Montblanc honours revered English playwright, poet and actor, William Shakespeare, who has penned over 150 sonnets and 37 plays including Romeo and Juliet, A Midsummer Night’s Dream and Macbeth.

Using a very select array of materials, and crafted by a highly-skilled master craftsman, Montblanc has created a fountain pen that honour the diversity and richness of Shakespeare’s work. The writing instrument’s resin cap takes an octagonal shape – a first for Montblanc – in reminiscence of the octagonal structure of the Globe Theatre. The black and white precious resin combination symbolises the colours of the flags that were raised above the theatre to indicate the play that was being staged – white for comedy and black for tragedy.

The fine feather-like pattern on the writing instrument’s body represents Shakespeare’s quill that he used to write his works, and the golden ring is representative of the earring he wore in the Chandos portrait of himself. The gold-plated ring encircling the writing instrument is embossed with symbols from seven of his most famous plays – a rose and dagger stand for Romeo and Juliet, a skull for Hamlet, two chess pieces for King Lear, a crest for Henry V, a crown for Macbeth, a swirling cloud for The Tempest and a laurel wreath in the form of a ‘C’ for Julius Caesar.

The William Shakespeare Limited Edition 1597 writing instrument is limited to exactly 1597 pieces to commemorate the year of 1597 when his biggest piece of work, The Tragedy Of Romeo and Juliet, was published. The Au 750 gold nib pays tribute to the Globe Theatre – or “wooden O” as it’s affectionately called by Shakespeare – with a depiction of the multi-storey stage where many of his plays were brought to life. The stunning writing instrument that is the William Shakespeare Limited Edition 1597 features a multicoloured barrel, embellished with exquisite guilloche patterns overlaid with precious lacquer which contrasts beautifully with the black lacquer cap. The fountain pen’s Tudor design elements is an homage to Queen Elizabeth I who was a longstanding patron to his work.

The finishing touch to this collection is two pairs of circular cufflinks with a Tudor rose motif. The cufflinks come in yellow gold PVD finish with red rose motif, and stainless steel with a black rose motif. Montblanc will also be releasing a velvet red ink to complement the Writers Edition William Shakespeare writing instrument.