Home > Style > Fashion > In love with nylon bags? Find out why the trendy accessory is trending once again In love with nylon bags? Find out why the trendy accessory is trending once again

Style
In love with nylon bags? Find out why the trendy accessory is trending once again
Share this article
Next article

When Miuccia Prada introduced her now-iconic nylon bag in 1984, she was making a radical statement.

The Italian designer had only just taken the reins of her family business, an old leather goods company that specialised in luggage and trunks. Prada, the brand, was once a favourite amongst the ultra-wealthy; by the time the decade of disco arrived, however, it was being outshined by the gloss and glamour of Versace and Gucci, who was shaking up Italian luxury fashion. Prada, the designer, wanted something different.

“Back then, I didn’t really like anything I saw,” she said in an interview. “It all just looked so old and bourgeois and boring. I just wanted to search for the absolute opposite of what was already out there.”

You might also like…
Style
Fashion Obsessions: Latest Fall/Winter 2021 collections to add to cart from Coach and more
Style
Every throwback retro kick you should own in your footwear collection

She found her answer in Pocono nylon, an industrial fabric that was used to make military products, like parachutes and tents. The material was mass-produced in a factory, not handcrafted. It contained chemicals and dyes, and it didn’t look or feel as expensive as leather. It wasn’t precious; it was practical. In short, nylon was everything that the world of luxury opposed. And Prada loved it.

“Suddenly nylon started to look more intriguing to me than couture fabrics,” said the designer. “I decided to introduce it to the catwalk and it challenged, even changed, the traditional and conservative idea of luxury.”

Her rebellion came in the form of a nylon bag that was described as “a post-modern parody of the classic Chanel bag”. Firstly, it was a backpack, not another boring designer handbag which Prada hated. It was a unisex accessory, not particularly ladylike. And for branding, it featured a small triangle logo instead of being covered by a monogram.

Of course, Prada’s nylon bag caused an uproar on the runway, but it brought in big business for the fashion brand. The bag especially became a bestseller among rich youths who, like Prada, didn’t share their parents’ outdated ideas about wealth. It became the ultimate anti-luxury statement, sold for luxury prices.

Throughout the ’90s and the ’00s, Prada would establish nylon as its signature, applying the synthetic fabric across a range of bags, as well as its short-lived but prescient athleisure line, Prada Sport.

Fast forward to today and you can now find almost anything in nylon at the Italian brand’s boutiques: jackets, dresses, socks, sneakers and more. And the nylon bag, once a revolutionary idea, is now ubiquitous in luxury fashion. Designer brands from Balenciaga to Alexander McQueen have all offered accessories crafted from the man-made material, no doubt spurred on by the success of Prada’s own Re-Nylon collection.

The collection, which was introduced in 2019, is defined by its use of Econyl, a form of nylon that has been recycled from plastic waste in the ocean. The material has become a badge of pride in the fashion industry, which has been pressured to make strides towards sustainability to meet the demands of eco-conscious shoppers.

Nylon’s technical and utilitarian connotations also puts it in favour of the streetwear crowd, another set of consumers that luxury fashion brands have been wooing.

For the most part, though, the nylon bag trend is simply that: a trend. The two-decade-cycle that fashion follows has deemed all things from the aughts as “in” for the time-being, and that’s pretty evident everywhere you look, from street style shots on Instagram to your TikTok feed. And if you want a nylon bag just because the likes of Dua Lipa, Bella Hadid and Kylie Jenner all have nylon bags, well, then, you won’t be short of options. Prada hasn’t just reinvented its backpack with the use of Econyl. It has also introduced these cryptic graphic prints, which are a design signature of Raf Simons’. The Belgian designer, now co-creative director of the Italian fashion brand, has also made a point of emphasising Prada’s triangle logo, which is stamped across the bag. Perhaps nothing marks the shift in luxury fashion’s attitude to nylon better than the fact that this Dior bag exists. The small messenger bag, which can be slung across your shoulder, first debuted in the Fall/Winter 2019 menswear collection by Kim Jones. Clearly inspired by the streetwear staple that is the belt bag, it’s been given a haute couture remix with the use of iconic Dior Cannage quilting often seen in the Dior Lady handbags. 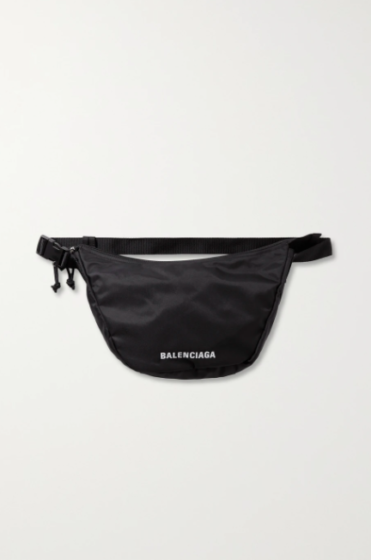 True to nylon’s roots in functionality, this versatile and practical bag from Balenciaga is one way to jump on the trend with a streetwear bent. It’s made in Italy and features an embroidered logo. Style it with your Balenciaga T-shirt and the equally sporty Runner sneakers. The Mini 4G backpack is one of the many silhouettes that creative director Matthew M. Williams has introduced to Givenchy. You can see his love for hardware details across the bag, from the metal 4G patch on the front to the removable chains on the straps. The bag is also crafted from a blend of satin nylon, giving in that distinctive sheen. 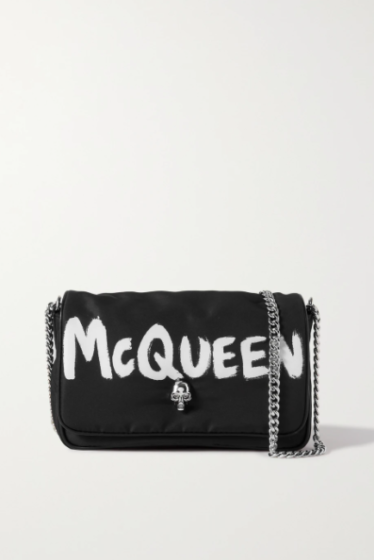 Alexander McQueen’s new Graffiti capsule collection includes this shoulder bag, which is scrawled across with the McQueen logo in a brushstroke design. It comes with leather trims and a thin chain strap, giving it that tension between elegant and edgy that has defined creative director Sarah Burton’s helm at the British brand. 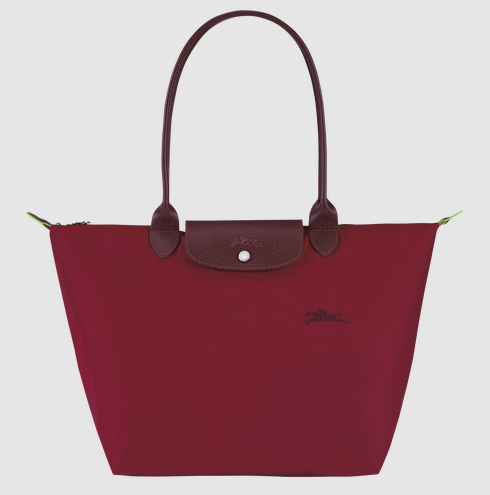 Prada isn’t the only fashion brand that has adapted the use of Econyl. This month, Longchamp launched its Le Pliage Green bags made from the recycled nylon fabric, marking the start of the brand’s commitment to using the material across all its tote bags by 2022.