Home > Living > People > The Obamas to Jacinda Ardern: 14 of the best-dressed world leaders 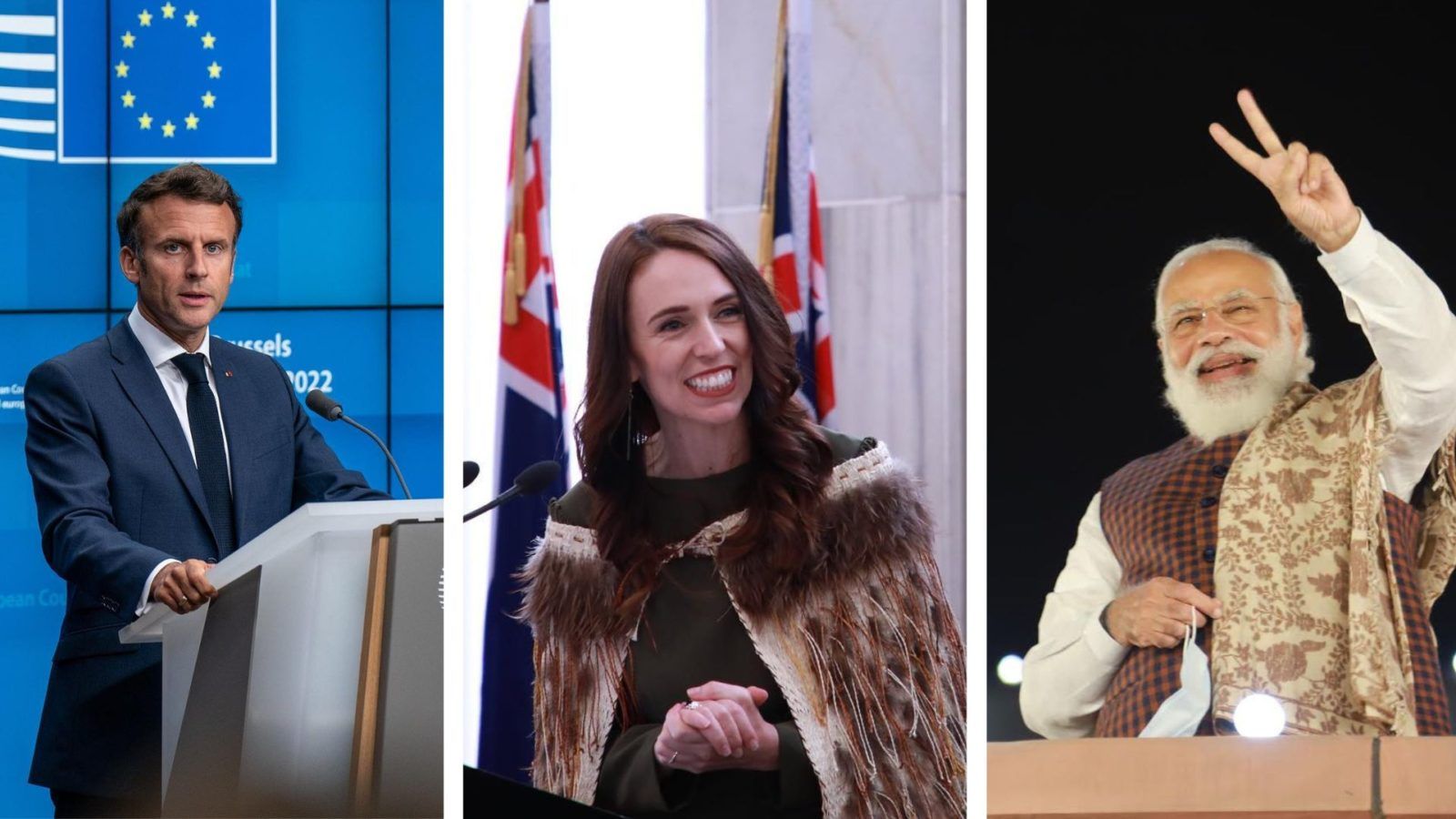 Style
The Obamas to Jacinda Ardern: 14 of the best-dressed world leaders
Share this article
Next article

Running a country and ensuring harmony within the nation and neighbouring ones — a lot is riding on the shoulders of world leaders and politicians. However, many of them do it in style and effortlessly.

Numerous studies have shown that a person’s attire can influence others’ perceptions of them. After all, one would be more inclined to pay attention to somebody who’s impeccably dressed and exudes confidence and charisma. This applies to politicians too, and many the likes of Canadian Prime Minister Justin Trudeau, former US President Barack Obama and New Zealand Prime Minister Jacinda Ardern have kept this in mind. On the world stage, they’ve always turned up looking sophisticated and put-together. Upholding the country’s culture and defining their personal style — casual or formal — such world leaders command respect wherever they go.

However, representing the country also means that one’s every action is minutely watched. For instance, on 25 June 2022, Malaysia’s Prime Minister Ismail Sabri Yaakob became the subject of scrutiny when he was spotted wearing a pink Burberry shirt at an event in Putrajaya. Known for his often bold sartorial choices, the PM’s designer shirt raised eyebrows due to its upscale price tag of USD 2,170 (RM 6,900) — more than triple the average monthly salary in the country.

That aside, there are multiple world leaders whose outfits have made headlines for more positive reasons. Decked out in chic threads spanning dapper suits, sleek pantsuits, traditional garb and more, here are 14 of the most fashionable politicians who have appeared at global forums, events and casual outings dressed to impress.

When it comes to acing the fashion game, whether it is on a talk show or global forum, we look up to the former US First Lady Michelle Obama. Well-fitted dresses, trousers and casual shirts make her wardrobe suitable to create an ensemble for every occasion.

Meanwhile, former US President Barack Obama, complementing his wife’s sense of fashion, looks sharp in everything he wears as well. Though his sartorial choices may be limited, the 44th US president knows how to pull it off with finesse, which makes him one of the best-dressed male politicians in the world.

Mostly seen in dark tailored suits paired with a plain shirt and a bright tie at work, Barack Obama is also often seen in bomber jackets, denim and casual shirts for his everyday look. All his tailored suits are sourced from the designer label Hart Schaffner Marx, one of the largest suit makers in the US.

If you are hoping to recreate his ensembles, put together a customised two-button single-breasted jacket and pleated trousers in 97 percent worsted wool and three percent cashmere blend.

Being the leader of the world’s largest democracy means shouldering an enormous amount of responsibility, and Narendra Modi does it with an impeccable sense of style and colour, which makes him one of the most well-dressed world leaders.

Narendra Modi is seen donning traditional Indian attire at events and visits worldwide. He mostly appears in Indian full-sleeve kurtas paired with pyjamas and sleeveless jackets or vests to complete his look. Depending on the occasion, a shawl or a long overcoat finishes the Prime Minister’s iconic looks.

In fact, such is his fashion sense that he has a garment named after him — the Modi Kurta. At times, considering the tropical heat, he ditches the full-sleeve kurta and wears one with half sleeves.

The Indian Prime Minister usually chooses colours like pistachio, chartreuse and saffron. The apparels are not only traditional but also have a youthful and modern vibe to them that instantly sets him apart from the others at global meets.

When Esquire named Justin Trudeau ‘the best-dressed man in politics’ in 2017, we knew that we are in for some smart looks that make everyday formal wear anything but boring.

Channelling a cool demeanour, Canada’s current Prime Minister effortlessly elevates a brown suit with a plain white shirt and a dark tie. A well-cut blue suit paired with a classic red tie or a blue tailored jacket with a white shirt and cognac shoes — that is how Justin Trudeau defines a classic look of a world leader.

But who said that being a politician means your clothes can’t be fun? The Canadian Prime Minister knows how to turn heads and add a dash of life to everyday workwear through casual shirts with rolled-up sleeves and colourful socks, which have motifs of skulls, crossbones and maple leaves.

There are only a few other politicians who can adeptly pull off a three-piece tuxedo as well as a pair of jeans and shirt with equal ease.

The youngest Prime Minister of New Zealand in 150 years and the youngest female Prime Minister of the island country, Jacinda Ardern is a bona fide style icon. One of the best-dressed leaders, she can ace a formal suit or a dress with as much ease as she would a combination of a pair of jeans, shirt and jacket.

Dressing for the occasion is a major highlight of the New Zealand Prime Minister’s fashion sense. For instance, when she wore a green dress with a poppy pinned near the shoulders in tune with Anzac Day traditions on 13 April 2022, during the opening of the borders for Australians to enter the country, she garnered global attention.

Though her workwear wardrobe includes luxury apparel in striking colours, she is also known for wearing thrifted garments — bonus points for sustainability.

The French President has a defined fashion mantra and is usually seen in a well-cut navy suit complemented with a sedate solid tie.

Eschewing the luxurious suits favoured by former French Prime Minister François Fillon, Macron’s clothes are reportedly quite modestly priced and are designed by Jonas et Cie. According to an 8 July 2020 report by Robb Report, the designer brand’s founder Jean-Claude Touboul told Women’s Wear Daily, “There is nothing too extravagant about his suits. He may change the number of pockets, and he likes his ties to be slim but not too slim.”

Being the head of one of the style capitals of the world, Emmanuel Macron’s most fashion-forward moment came in 2019 when he passed the Fashion Pact, which is a coalition of brands that pledge to reduce their impact on the environment.

Alexandria Ocasio-Cortez made headlines when she wore a ‘protest dress’ at the 2021 Met Gala. The dress was designed by Aurora James and carried the message that read ‘Tax The Rich.’ Though it invited mixed reactions from fashion and political analysts for being “hypocritical and tone-deaf,” as per The Guardian report dated September 2021, it did put her on the global fashion podium.

Sleek middle-parted hair, golden hoop earrings and fitted tailored outfits have made her one of the best-dressed leaders in the world. She has a wide-ranging wardrobe filled with midi dresses, sharp suits, jackets and pumps. From blue to all-white and even pop pink ensembles, the politician is a vision to look at in whatever she wears.

Former US First Lady, 2016 US Presidential candidate and former Secretary of State, Hillary Clinton has many feathers in her cap during her long political career. She exudes a confident, powerful persona everywhere she goes.

When it comes to fashion, Hillary Clinton has a distinct style. From well-fitted pantsuits in bright shades to blue tailored dresses, her wardrobe is practical as well as fashionable imbued with a touch of modern aesthetics.

She also became one of the best-dressed celebrities to attend the 2022 Met Gala where she wore a custom strapless gown by Joseph Altuzarra. The gown’s embroidery bore the names of 60 women who have made incredible contributions to American history. These include Elizabeth Blackwell, the first woman to get a medical degree in the US and Clara Barton, who founded the American Red Cross along with Sacagawea, Harriet Tubman, Eleanor Roosevelt and her mother, Dorothy Rodham.

Theresa May, former prime minister of the UK

Theresa May was the second female Prime Minister of the UK, after Margaret Thatcher.

One of the best-dressed world leaders, she is known for her stylish formal wear, which are paired with mismatching accessories. Very few women can pull off textured pantsuits with leopard-printed shoes as she did when she arrived for David Cameron’s last cabinet meeting in July 2016. From glamorous bright dresses to tailored jackets, she carries every attire with confidence and elegance.

The former President of Costa Rica and the first female head of nation, Laura Chinchilla, is known as one of the best-dressed leaders for her bold choices and vibrant dresses for her appearances on TV shows and events. She pulls every attire with utmost elegance.

For her inauguration into Presidential office in May 2010, Laura Chinchilla wore an all-white ensemble, comprising a skirt and a suit jacket. She teamed it with an in-built white cummerbund.

Enrique Peña Nieto shows the world how to look effortlessly classic while in office. The former president is known for his extravagant sartorial choices, which are not only stylish but also sophisticated.

After all, it is not everyone’s cup of tea to sport pinstripes and a striped tie. Like Angélica Rivera, his wife and the former First Lady of Mexico, Nieto, too, has his own style mantra. His trademark red tie paired with tailored suits makes him cut an enigmatic and clean silhouette, placing him among the best-dressed world leaders.

Commonly referred to as ‘William and Kate of the Himalayas’, Bhutan’s King and Queen serve major fashion goals when it comes to portraying the country’s traditional outfits.

The wedding of His Majesty Jigme Khesar Namgyel Wangchuck and Her Majesty Jetsun Pema in 2011 drew global attention, as their traditional outfits were not only ornate but also modern. The Queen’s mustard yellow Kira took three years to weave and featured contrasting sleeves in fuchsia pink. Something that was soon lapped up by big global fashion houses.

Queen Jetsun Pema is also known for her statement earrings, while her husband has a distinct hairstyle, inspired by the late American singer and actor Elvis Presley. Together, the duo represents a modern change in Bhutan’s politics and outlook towards global trends, as well as upholds the nation’s traditional customs and heritage.

Before entering the political arena, Yingluck Shinawatra was a top executive at SC Assets — and her wardrobe and fashion choice are testimony of her business background.

As the country’s first female Prime Minister, Shinawatra’s outfits, makeup and accessories have often been in the news. Whether it was her business skirts and suits in navy blue and black or more ornate garments in Thai silk, her fashion game incorporates traditional Thai elements to create sophisticated and modern looks.

One of the finest examples of such an outfit came up when she met Barack Obama in 2012. A burgundy silk skirt paired with a silk ikat jacket created the chic look. The jacket featured a neckline, which was a cross between Queen Anne of England neckline and a sweetheart neckline. It also had a red patchwork teamed with mauve and metallic trimmings. A brown-golden scarf put through a large buttonhole completed the look.

Hillary Clinton Barack Obama Emmanuel Macron Narendra Modi Politicians
Trinetra Paul
An ardent foodie, Trinetra seeks every opportunity of travelling and writing. Storytelling and slam poetry are her go-to jam. Her lazying around ideas includes binge watching and whipping up some snacks or searching the next place to visit.
Sign up for our newsletters to have the latest stories delivered straight to your inbox every week.