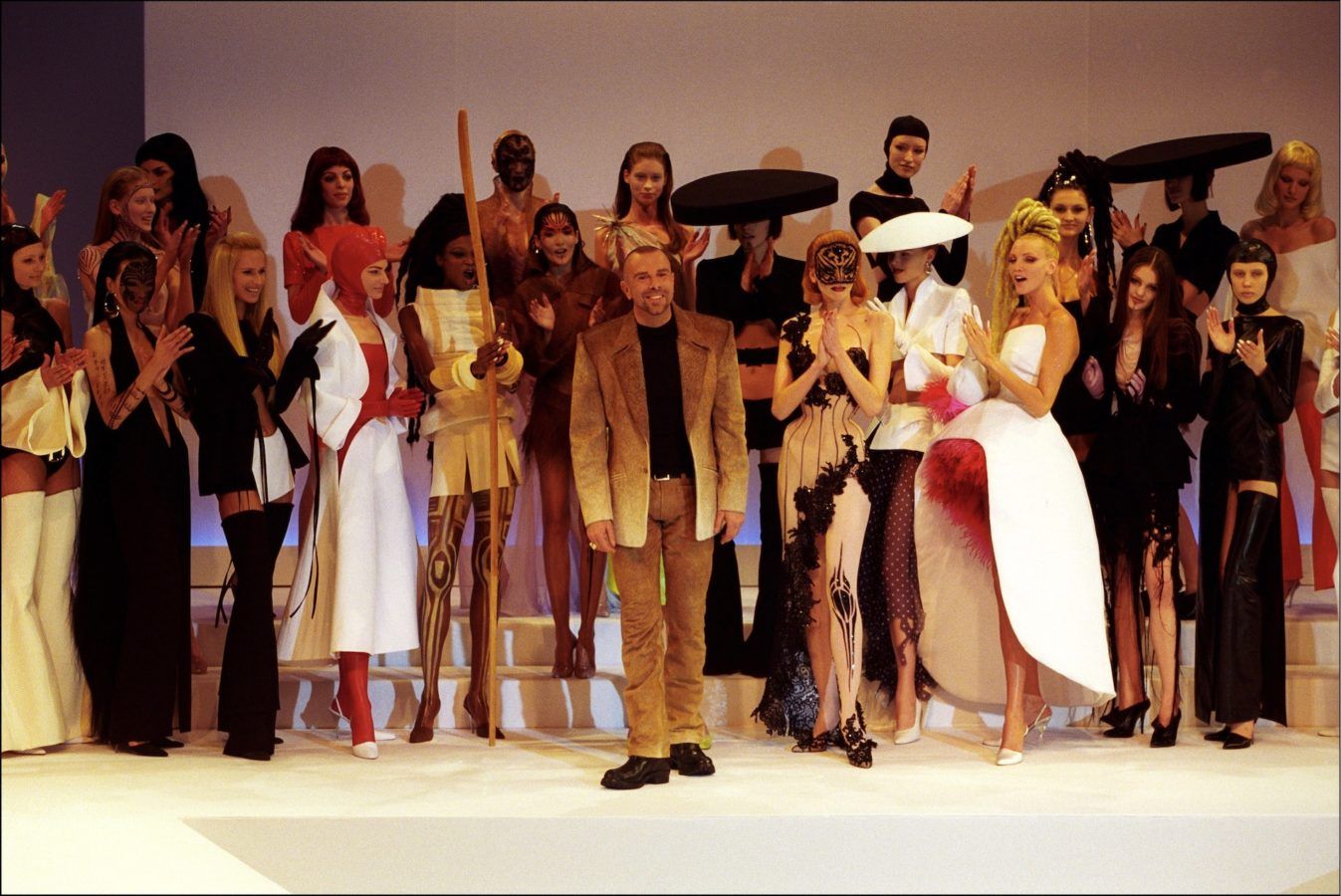 Mere days after the passing of André Leon Talley, the fashion world suffers another loss: Thierry Mugler has passed at 73.

The French fashion designer was an influential presence in Paris in the ’80s and the ’90s, where he shook up the world of haute couture with body-conscious silhouettes that owed as much to his idols Cristóbal Balenciaga and Christian Dior as to his professional dancing background. His emphasis on the hourglass figure through extravagant shoulders and cinched waists also defined power dressing, which ruled the ’80s.

Mugler’s runway shows were theatrical affairs where he would unveil fantastical creations inspired by sci-fi, nature and art. His presentations were also star-studded with his famous muses. For his 20th anniversary show, for example, the runway was graced by Hollywood icons Tippi Hedren and Julie Newmar, the world’s first supermodel Veruschka, as well as the supermodels of the ’90s, such as Naomi Campbell, Kate Moss and Linda Evangelista.

With his interests in sculpture, painting, photography, theatre and dance, Mugler didn’t consider himself as a fashion designer. “I’ve always felt like a director, and the clothes I did were a direction of the every day,” he said in a rare interview in 2019. He added, “Why would anyone only want fashion? There are the costumes, but there’s also the environment, the lights, the moment,” he shared in a rare interview.

Mugler retired from fashion in 2002, after which he focused on creating costumes for ballet and theatre, as well as fragrances. But he wasn’t entirely divorced from fashion: his designs would inspire a new generation of fashion icons like Alexander McQueen and John Galliano, and he would continue to create custom looks for the likes of Beyoncé and Kim Kardashian.

To celebrate his legacy, we take a look at some of Mugler’s most compelling creations that have surprised, shocked, and shaped the moment.

“I think nature is endless and beautiful, so I try to occupy nature and never contradict it,” once shared the designer. That statement rang especially true for his Spring/Summer 1997 collection, Les Insectes. The runway buzzed with models wearing bug-eyed sunglasses, headpieces resembling feelers, and gowns woven with elements of spider webs and beetle shells. This dress, originally modelled by Jerry Hall, is embellished with sequins meant to mimic butterfly wings. It would later be worn by Jennifer Lopez, Beyoncé (see her Diva music video), and most recently, Irina Shayk.

Mugler was an avid motorcycle rider, even though he met with several accidents including one that prompted him to reconfigure his face. He was also fascinated by the edgy biker look; he created a suit resembling a motor vehicle with Cadillac ornaments almost a decade before his Spring/Summer 1992 collection, Les Cowboys, and this bustier hit the runway. As its name suggests, the corset was meant to mirror the front of a motorcycle. It was crafted from plastic, metal, and Plexiglas, and even came with its own handlebars. It was a fierce design, and therefore fitting for Beyoncé to wear the vintage piece when promoting her I AM … Sasha Fierce album. The singer also hired Mugler himself to create custom several costumes for her album tour.

As we mentioned, Beyoncé was big on Mugler. She wore him frequently on stage and in her music videos, including the one for Sweet Dreams. You might remember the look: the metallic gold bodysuit, fitted with matching gloves that looked like armour. It was inspired by an earlier design from Mugler’s 20th anniversary Fall/Winter 1995 collection, which was filled with sexy cyborg ensembles. According to Thierry-Maxime Loriot, curator of Mugler’s first major retrospective, “[Mugler] spent more than six months creating [the original robot suit] with specialists… It’s surprising and in terms of craftsmanship, it really pushes boundaries. It demonstrates Mugler’s interests in transhumanism, in modifying the body and creating new silhouettes. All the robot suits embody the savoir faire of the Mugler atelier.” In 2021, Kim Kardashian tapped on Mugler to create a Halloween outfit that crossed his robot suit with the cowboy look.

The Birth of Venus dress

There are very few red carpet looks that you could describe as truly unforgettable. One of them is Cardi B’s Mugler look for the Grammy Awards in 2019: a Swarovski-crystal satin sheath gown inspired by the Botticelli painting, Birth of Venus. The gown, like the robot suit, came from Mugler’s 20th anniversary collection in 1995. It made Cardi B a notable fashion force: besides Beyoncé, the rapper was the only other celebrity that Mugler had dressed and opened his archives to at the time.

Today, most people know Mugler not through Beyoncé, Lady Gaga or Cardi B, but Kim Kardashian. The billionaire began dressing in his vintage creations shortly after Cardi B did, coinciding with the launch of the French designer’s first retrospective exhibition. But none of her Mugler looks were put in the spotlight quite her “wet” dress for the Met Gala. Following the event’s campy theme, Kardashian arrived in a corseted nude dress, seemingly dripping with raindrop-like crystals, which took Mugler eight months to create. Kardashian shared: “[Mugler] envisioned me as this California girl stepping out of the ocean, wet, dripping.” Kardashian’s outfit would inspire several more “naked” dresses on the red carpet in the years to come.

Thierry Mugler Lady Gaga Kim Kardashian Cardi B mugler
Lifestyle Asia
Sign up for our newsletters to have the latest stories delivered straight to your inbox every week.