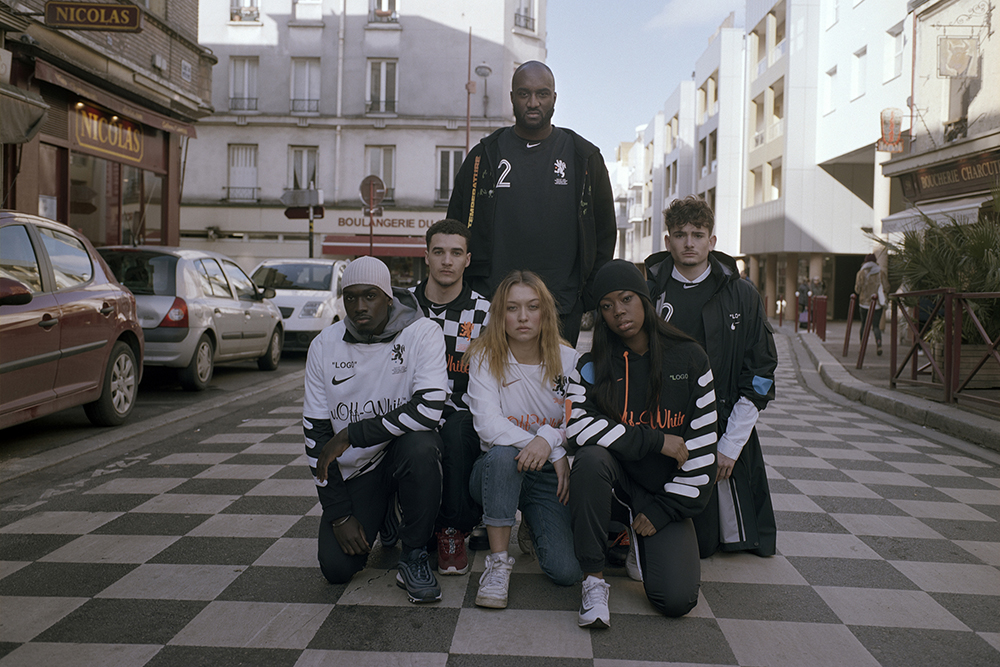 With the 2018 World Cup approaching, Nike snaps up two designers at the top of their game at the moment. Both Virgil Abloh and Kim Jones will be releasing their separate capsule collections in time for the World Cup. While Abloh will be introducing his very own OFF-WHITE x Nike “Football, Mon Amour” collection on 14 June, Jones will be releasing his Nike “Football Reimagined” on 7 June.

Abloh’s first Nike collaboration was known as ‘The Ten’ and features some of Nike’s best-selling sneakers in a new and creative light. With ‘The Ten’ already a successful hit, Abloh’s upcoming capsule collection will feature a variety of apparel, accessories, and footwear.

Taking inspiration from European football teams with big name sponsors splashed on the front of its jerseys, Abloh’s designs focuses on the variants of typography showcased throughout the collection. Abloh takes inspiration from both the Croatian and Dutch national teams, featuring a chequered black-and-white long-sleeve top, as well as an all-white long-sleeve polo tee with the Dutch Republic Lion.

A notable inclusion into the capsule collection will be the Nike Flyknit Zoom Fly with the typical OFF-WHITE touch. By the looks of it, it bears little resemblance to its predecessor, most notably the inclusion of a Flyknit upper.

Aside from Abloh’s slice of the pie, Nike also sought out Kim Jones for his own capsule collection ahead of the 2018 World Cup. While Abloh’s designs placed heavy emphasis on the design nature that is OFF-WHITE, Jones’ focuses more towards the London punk style during the 70’s and 80’s.

Jones’ own iteration of the traditional football jerseys features new styles of cut into the garments, which includes shorts and pre-match jackets. Besides the upcoming apparel, Jones also created a hybrid sneaker, which encompasses three of his favourite Nike sneakers – the Nike Footscape, the Vandal, and the Air Max 97. This neo-punk design pays a homage to the movement of the 70’s and beyond.

Ever since the release of the Louis Vuitton x Supreme collaboration, we have seen more and more high-end fashion labels and designers taking the leap over to the ever-growing street wear scene in dramatic fashion (pun intended). What’s great about both designers is that both have or are currently working with LV. Abloh currently holds the position of artistic director while Jones was its predecessor. Abloh is expected to showcase his first collection in June during the Men’s Fashion Week in Paris.

Nike Off-white Kim Jones Kim Jones x Nike Virgil Abloh off-white x nike nike the ten 2018 World Cup
Wi-Liam Teh
Senior Writer
Wi-Liam is a geek at heart with a penchant for tattoos. Never without a drink in hand (preferably whisky, gin, or Guinness), he is also a writer by day and a keyboard warrior by night. On his day off, he masquerades as a streetwear and sneakerhead enthusiast while his bank account says otherwise.
Tech Cars Watches Entertainment Food Drinks