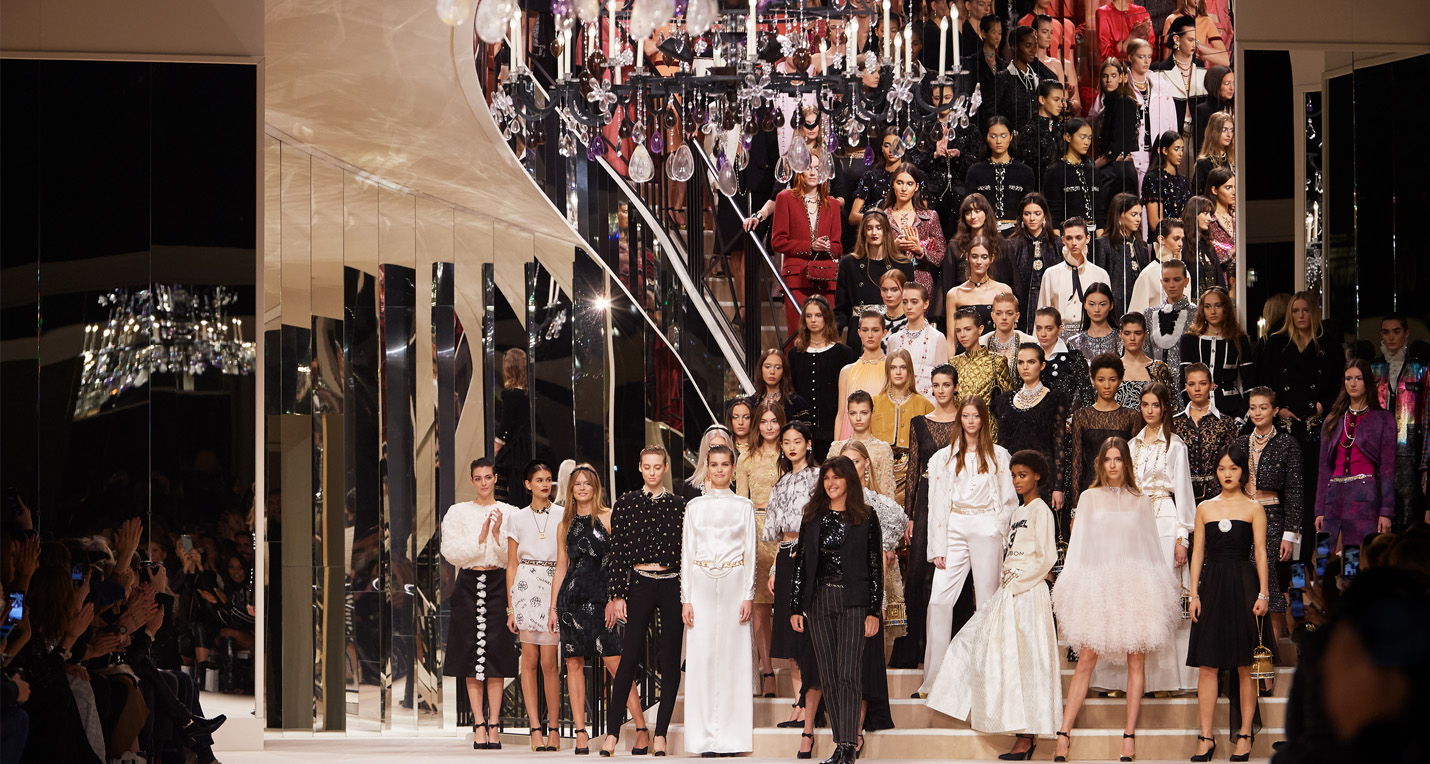 Chanel’s Métiers d’Art fashion shows have always brought us to far-flung and magical places, from Egypt to Germany, Scotland and Texas. But as destination shows and exotic themes become more and more the norm in the fashion world, Virginie Viard has decided to stay put this 2019/2020 season. This year, she’s taking us back to one significant address — 31 rue Cambon, Paris — where the magic of the house of Chanel began and remains strong.

“We thought about the original shows that were held at 31 rue Cambon,” said Viard, “and how great it must have been to see the models walking by so close, and the setting by Coco’s mirrored staircase, which always gives me a thrill to see.”

It was said that Gabrielle Chanel would watch her shows sitting on the fifth step (five is, of course, her lucky number) of this iconic staircase; its beige steps, trimmed with white, spiral up to the haute couture salons on the first floor and the creation studio on the third. Sandwiched in-between is her mysterious apartment, untouched and frozen in time.

Here, you’ll find an intimate, baroque space filled with many of the codes of Chanel — from gold lions (she’s a Leo), a majestic jewelled chandelier interlaced with double Cs, Chinese Coromandel screens and more — all related, in one way or another, to Gabrielle Chanel’s personal life.

With the help of film director and the house’s long-term friend Sofia Coppola, Viard brought the spirit of 31 rue Cambon to Grand Palais with a special set featuring a similar replica of the mythical Art Deco staircase, where she presented her very first Métiers d’Art collection for Chanel.

The collection, befittingly named 31 rue Cambon, honours and reinforces every Chanel house code, along with the colours of black, beige, crystal, and old gold, all of which could be found within Gabrielle’s baroque-style apartment. “I have completely absorbed the Chanel codes. I saw Karl twist them so much,” expressed Viard. “I have grown up here. I am a child of Karl and Gabrielle.” The emblematic camellia is, of course, one of these treasures, along with the bows, chain, two-tone elements and many more.

As opposed to Lagerfeld’s architectural style, Viard’s aesthetics are soft and simplified, which, as we now understand, are the designer’s preferred approach for contemporary elegance. Tweed jumpsuits are made so fine they feel as supple as knitwear, while short suit jackets come with rounded edges, paired with low waisted skirts with slits at the front for better movement, and a fine chain belt with pearls that highlights and defines the waist. There is also a suit that has been elongated into a dress with an asymmetric décolletage and a long pointed train, along with tie-dye tweed suits inspired by Gabrielle Chanel’s pink tweed suit in 1960.

Light and slender silhouettes continue to seep through the collection, moving on to evening pieces such as a beige see-through dress sprinkled with embroidered tulle camellias, as well as a black dress in embroidered lace, adorned with a feather-trimmed neckline. A particular minaudière also caught our attention, swaying along in the shape of a crystal-embellished golden birdcage reminiscent of the one in Mademoiselle’s apartment.

Let’s not forget the bags, the iconic 11.12 and 2.55, which are spotted in smaller sizes and also additional iterations including one that has a chained top handle, while others are piled with embellishments such as bows or sequins. Chanel N°5, the first and only perfume launched by Gabrielle Chanel, is now in miniature sizes, adorning the chain and pearl necklaces in its timeless opulence.

Take a look at the full collection in the video below.

(All images: Chanel)
This article first appeared on Lifestyle Asia Hong Kong.
Chanel Fashion Show Chanel Metiers D’art Virginie Viard
Lifestyle Asia
Here's where you can read the latest news and stories from Lifestyle Asia and our sister titles PrestigeOnline and Augustman, curated from all of our editions in Hong Kong, Singapore, Kuala Lumpur, Bangkok and India.
Luxury