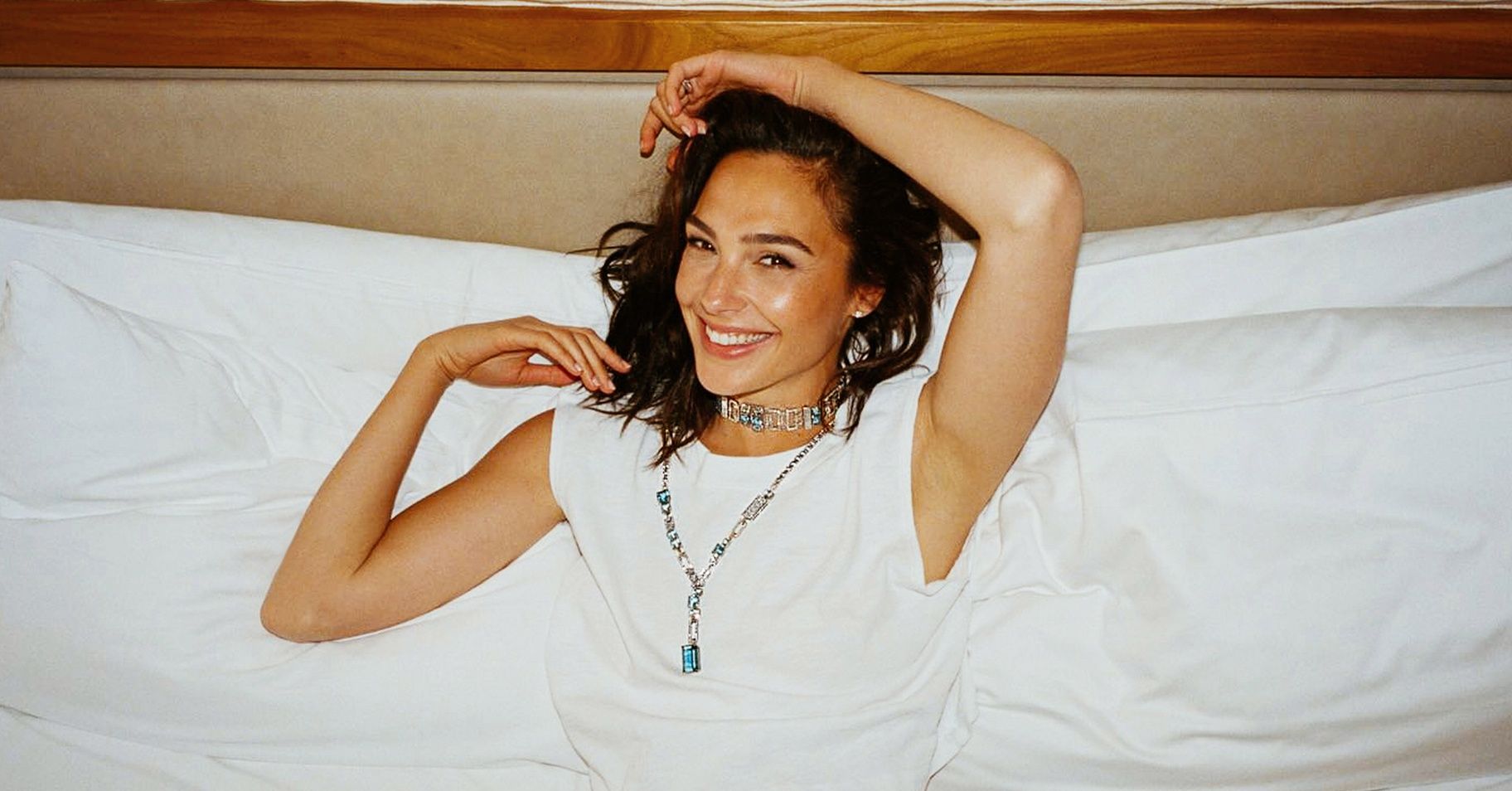 Here’s what you need to know about Aquamarine, March’s cooling birthstone

Style
Here’s what you need to know about Aquamarine, March’s cooling birthstone
Share this article
Next article

After her divorce, Princess Diana ditched her wedding ring and took to wearing one made for her: an emerald-cut aquamarine ring with solitaire diamonds. In a lot of ways, her choice of gemstone made sense. Like the sapphire that previously graced her ring finger, the aquamarine matched the blues of her eyes. But the stone is also a symbol of tranquility; it’s said to give its wearer a clear mind. That’s something that the late aristocrat no doubt sought after splitting, very publicly, from her adulterous ex-husband.

You may also like…
Style
Get creative at home with this season’s trendy tie-dye print
Style
Wrist Watch: Classy timepieces to celebrate the fearless woman in you

But you won’t need a dramatic backstory to appreciate the aquamarine. The gem derives its name from the Latin word for seawater, and aptly so: it draws you in with its refreshing hues, ranging from pale translucent blue to opaque green. Little wonder why aquamarine crystals are often used in meditations.

The finest aquamarines, which resemble drops of clear water, are often mined in Pakistan’s Karakoram Mountains and the Brazilian state of Minas Gerais. These are prized as highly as diamonds, and sometimes even replace the icy stones on engagement rings. (Aquamarines are, after all, one of the most resilient of gems.)

Speaking of matrimony, Duchess of Sussex Meghan Markle famously attended her wedding reception wearing an aquamarine ring — the same one that belonged to Princess Diana. The gem’s popularity is also seen on the red carpet: it was worn by the likes of Gal Gadot, Emily Blunt and Cardi B in the last few years.

Whether you’re looking for an aquamarine ring to show off at your own socially-distanced wedding, or simply want a jewel that can bring you some peace of mind, we’ve got a list of options that feature March’s soothing birthstone. Check them out below. 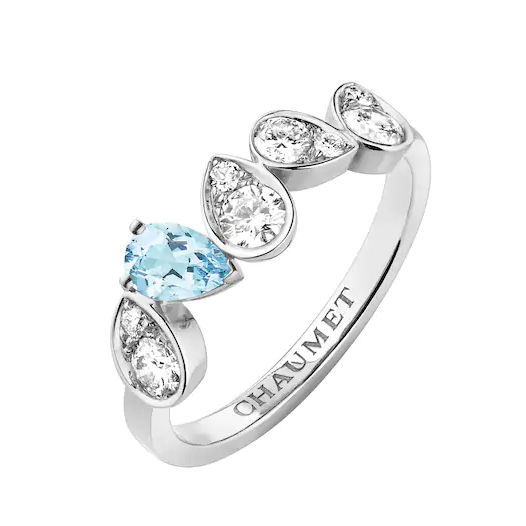 Dedicated to the free-spirited Empress Joséphine, this Chaumet ring boasts a contemporary look. It’s set with a 0.24-carat aquamarine that stands out from the similarly pear-shaped pods containing diamonds. Wear the ring in stacks for stunning results. 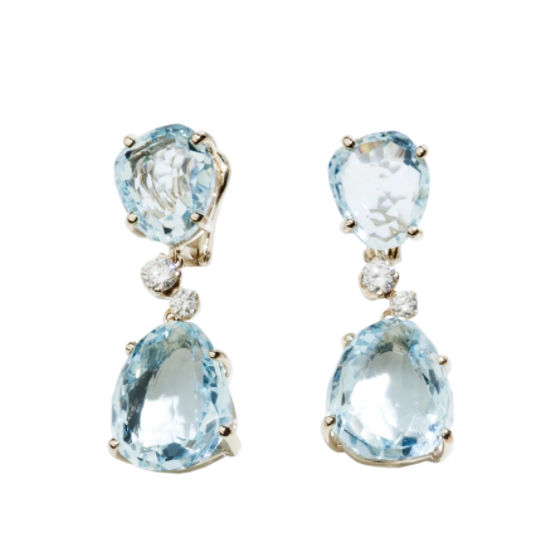 These Pomellato earrings perfectly capture the aquatic quality of the blue gemstone. Here, the aquamarine is presented as crystal drops that are complemented by smaller diamonds. The design is refreshingly simple, yet elegant enough to wear with your favourite evening gown. 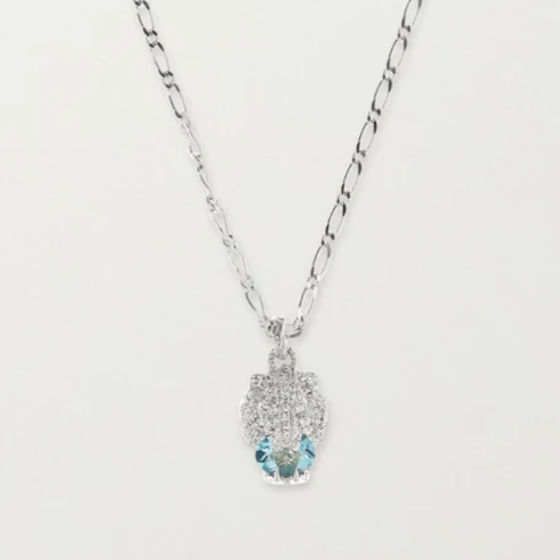 It’s not often that you see the calming aquamarine paired with such a powerful symbol as the lion, but that’s what makes this Gucci necklace one of a kind. You’ll find the blue gem sitting between the jaws of the diamond-encrusted head of wild animal, which altogether makes for an eye-catching pendant. 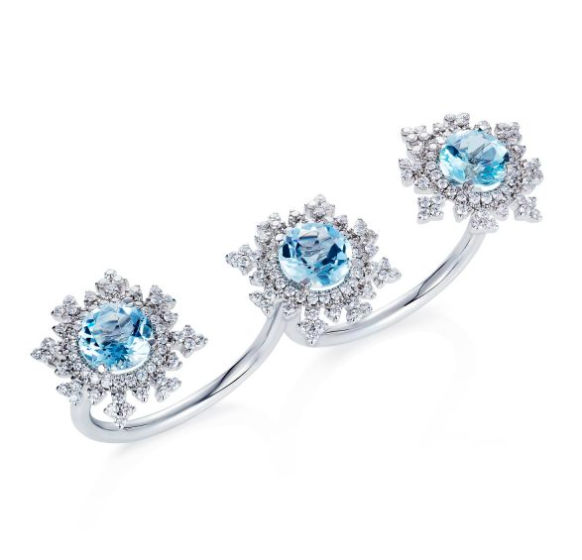 London-based fine jewellery designer Nadine Aysoy decided that one aquamarine isn’t enough, so she created this frosty ring with three of them, totalling three carats in all. What makes the ring even more exquisite are the tiny diamonds that surround the blue gems, arranged in a hypnotic snowflake design. 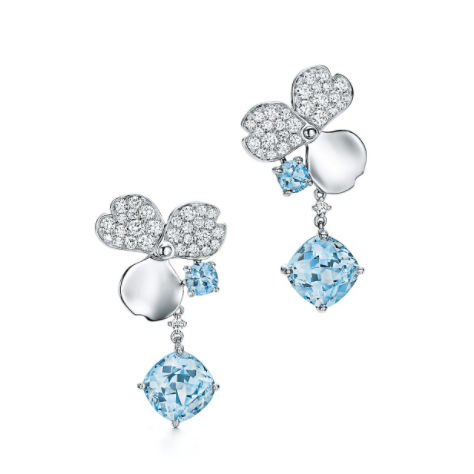 For an everyday design, consider these Tiffany & Co. earrings. They feature the New York jeweller’s signature Paper Flowers motif, with dazzling cushion-cut aquamarines dangling from them. These baubles are just what you need to elevate a laid-back outfit of a T-shirt and jeans. 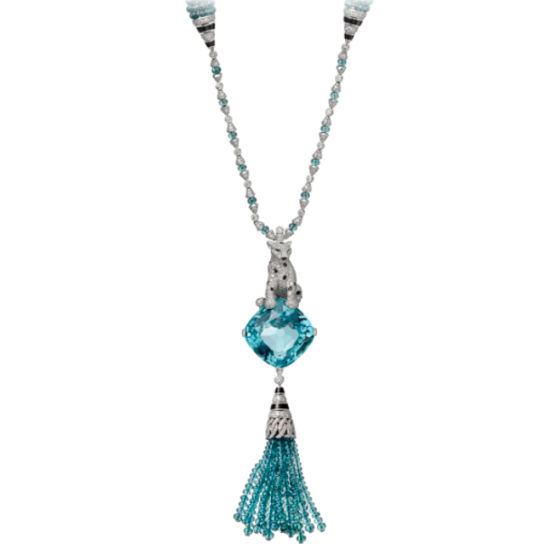 If you’re looking to really turn heads, this high jewellery necklace from Cartier is your best choice. The piece is transformable — you can wear it as a bracelet or a brooch, too. We’d prefer the latter, because it lets the opulent pendant do all the talking with its diamond-encrusted panther (a symbol of Cartier), tassel of blue tourmaline beads and the 52.36-carat aquamarine that sits at the centre of it all.

Shop here
Aquamarine Jewellery birthstone Aquamarine
Lifestyle Asia
Sign up for our newsletters to have the latest stories delivered straight to your inbox every week.