Home > Style > Jewellery > All about the August birthstones Peridot, Sardonyx and Spinel, and the best jewels to shop 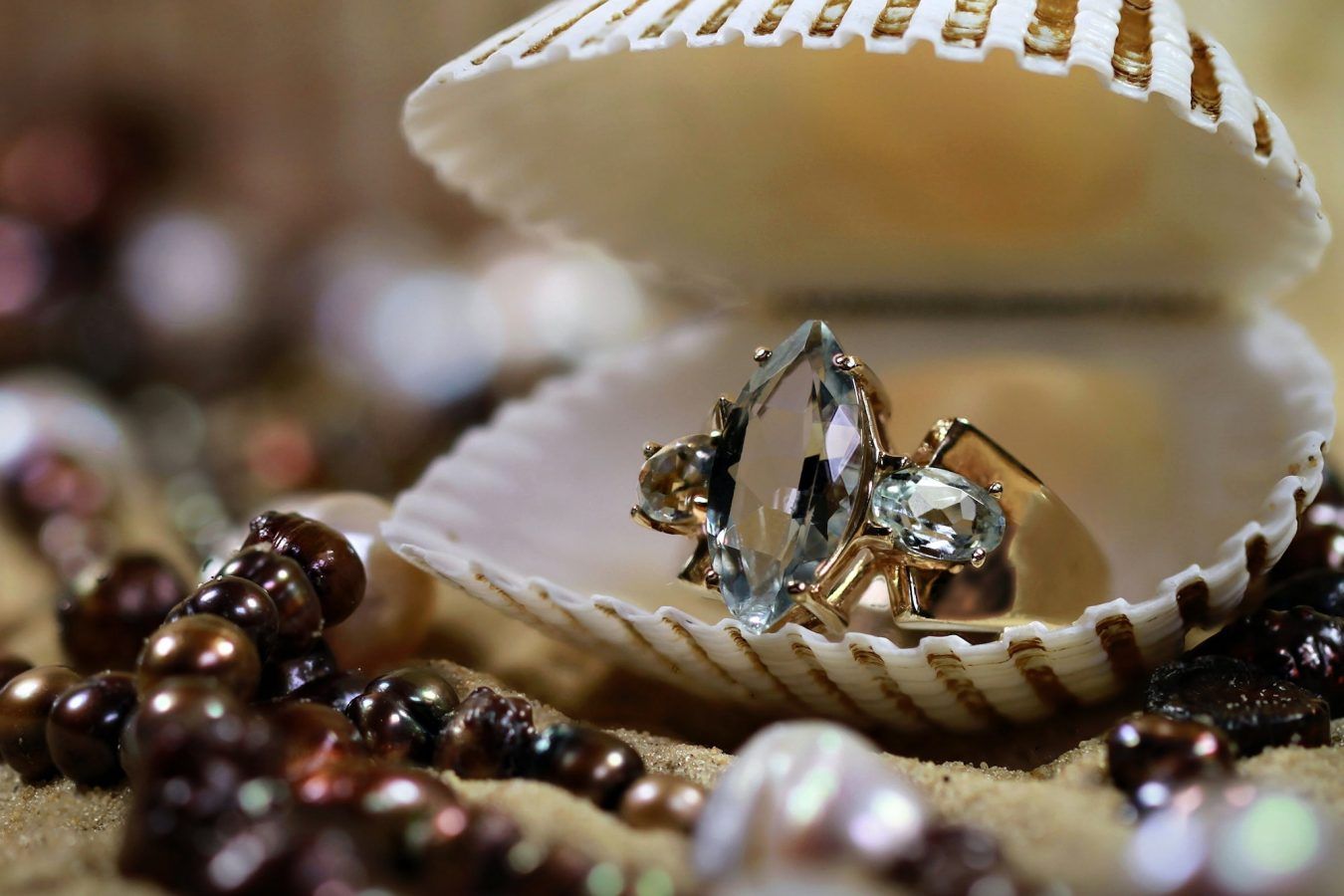 Diamonds are a girl’s best friend. But if you ask us, glorious gemstones like peridot, spinel and sardonyx come pretty close too. Here’s everything you need to know about this August’s birthstone — or birthstones, as there are three.

There’s nothing like gifting your loved one a unique jewel, especially when it’s connected to their birth month. Not only are they unique and significant to the wearer, but these specific gemstones offer a meaningful connection too. What makes these stones so special is the significance and history behind each rock. These unique jewels date back to hundreds of years ago, and were cherished even in those ancient times. Today, August birthstone remain just as relevant, and can be found on a plethora of wearable jewellery.

It is also believed that each birthstone possesses remarkable abilities to assist with healing, luck and wealth. For August, we’re highlighting these three special birthstones: Peridot, spinel and sardonyx. If you’re on the hunt for the perfect jewellery gift or are simply curious about coloured gemstones that aren’t diamonds, here’s everything you need to know about the August birthstones.

Everything you need to know about spinel, peridot and sardonyx, which share the title of August birthstone:

Sardonyx is believed to possess healing powers by restoring order and peace. Comprising alternating bands of sard and onyx (hence its name), the stone ranges from yellow-red to red-brown hues, depending on the amount of iron oxide in the rock.

The sardonyx stone harks back to the days of yore, where it was favoured by ancient Egyptians, Roman and Greeks who wore it on rings, pendants, amulets, earrings, necklaces and bracelets. It was popularly used in cameo designs, where landscapes and portraits were carved out of the stone.

These continue to be much sought-after even today: Earlier this year, Apollo Galleries held an auction of ancient art and antiquities, which included several stunning sardonyx jewels. Highlights included a gold and sardonyx ring etched with the image of Roman god Mars, which was an artefact from the Julio-Claudian Period (100AD), as well as a300-400AD sardonyx cameo pendant engraved with Medusa’s head. Both jewels sold for £3,000 (RM 16,000) each — not too shabby.

Sardonyx cameo jewellery has made star-studded appearances on the red carpet too. At the 2019 Venice Film Festival, Cate Blanchett made a lasting impression with her limited-edition hand-carved sardonyx cameo earrings created by Cindy Sherman and LizWorks. The showstopping jewels were crafted in pink gold and also festooned with pink and lemon quartz. 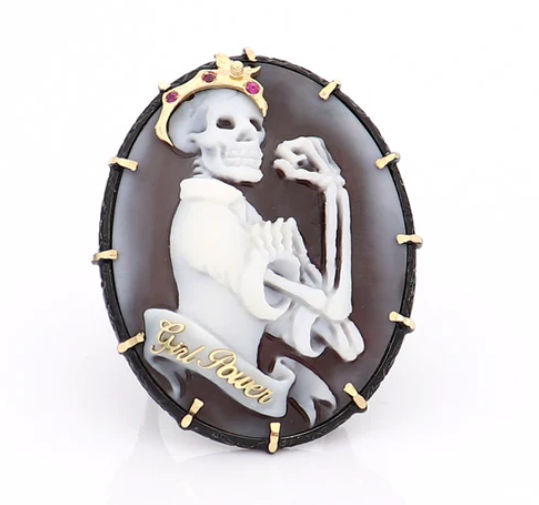 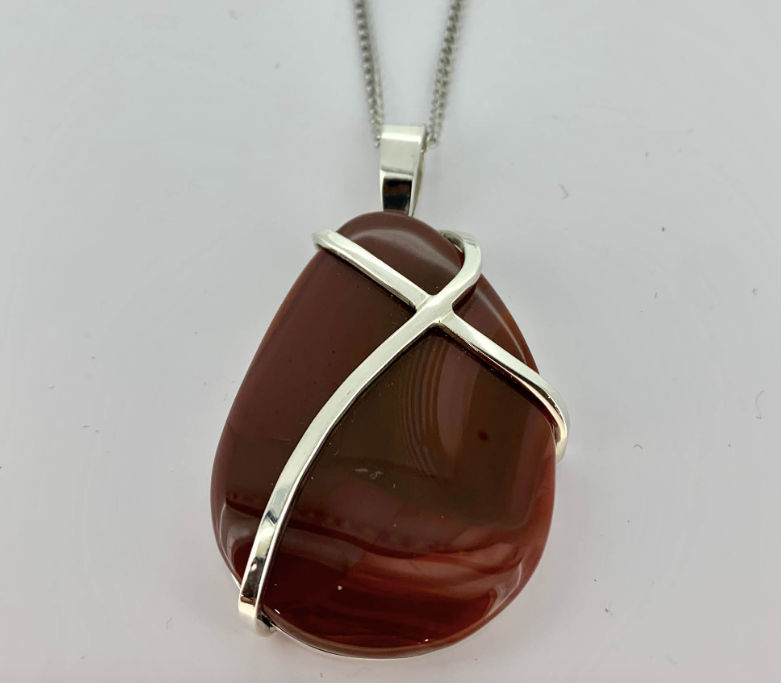 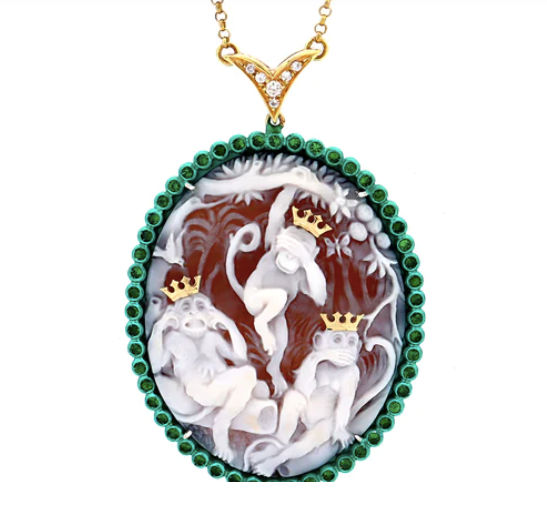 Designed by Amedeo, the “Girl Power” 40mm sardonyx hand-carved cameo ring offers a modern touch to ancient craftsmanship. The cameo jewellery, adorned with 0.0033ct rubies, features a skeleton silhouette adaptation of the iconic 1943 J. Howard Miller’s “We Can Do It!” wartime poster.

For those who prefer a unique gift with a tale, this hand-carved “Momentarily Lost in a Royal Jungle” gem features three wise monkeys donning three crowns. Adorned with 0.11ct white diamonds and 1.14ct tsavorite, the 50mm sardonyx cameo shell is completed in 18k gold and sterling silver.

For those who prefer a classic design, consider the Leonard Jewelry necklace. Simple and understated, it comprises a single large sardonyx pendant wrapped with an 18″ sterling silver chain and is perfect when paired with a breezy outfit in brown, white and black.

Dazzling in vivid lime green tones, the peridot gem is commonly found in mafic rocks. According to the American Gem Society, the peridot stone is derived from the Arabic word faridat, which means gem and is rooted in the Greek word meaning “giving plenty”. Formed deep in the earth’s mantle, the gems are often found in rocks formed from volcanoes. The peridot birthstone also holds emotional and psychological healing properties. It’s believed to be associated with prosperity and good fortune. 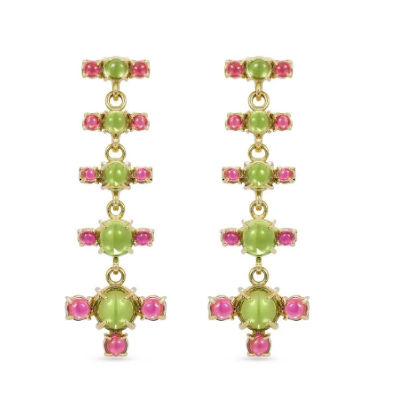 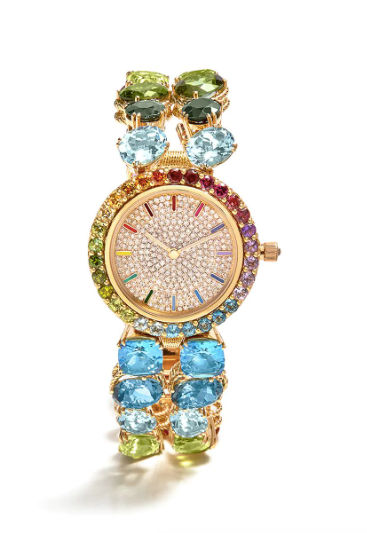 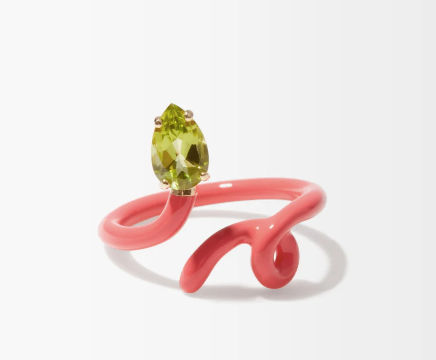 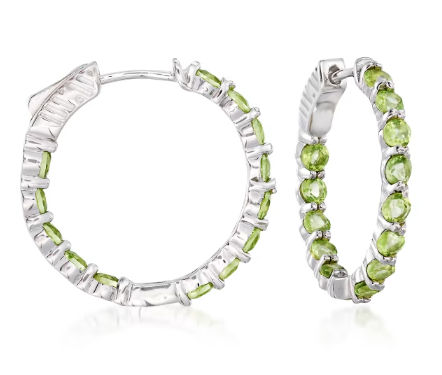 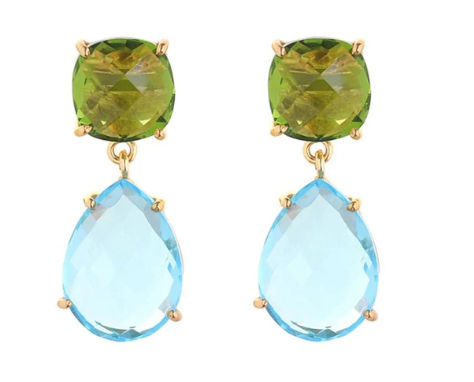 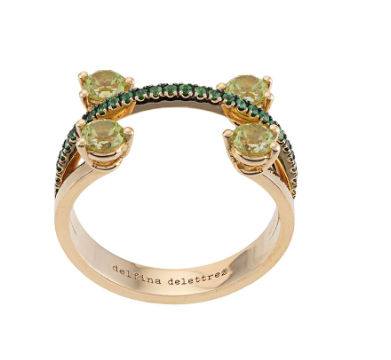 Shoulder-graze earrings never left. These 18kt yellow gold peridot Maviada earrings dazzle in light green and pink tones. Ideal for gala nights and date nights, the gorgeous pair is perfect with a monochrome look. For watch lovers, the Dolce & Gabbana watch is a sight to behold. Crafted from stainless steel, the 34mm rainbow timepiece sparkles in topaz, amethyst, tourmaline, quartz, citrine, peridot and cabochon stones. Strap this on your wrist and focus on pairing your timepiece with dainty rings.

Spruce up your jewellery game with the Delfina Delettrez ring. Adorned with a tsavorite embellished band and four round-cut peridots, the ring is great for stacking or worn on its own. Pair this gem with an eternity or trinity ring, and you’re good to go. If you’re into quirky enamels, the Bea Bongiasca ring should be on your wishlist. Crafted with a swirling band decorated with a 0.75ct peridot, the Baby Vine Tendril ring is an excellent addition to your everyday wardrobe.

Consider the spinel stone if pink and purple tones are your significant other’s favourite hue. According to the GIA, the rare stone is often confused for the ruby and sapphire stones. In ancient times, the mines located in central and southeast Asia were known to produce these precious stones. Famed as a love stone, the spinel gem is believed to help people to be devoted to one another. As the perfect symbol of love, going on a hunt for jewellery that features hints of spinel makes the perfect anniversary gift. 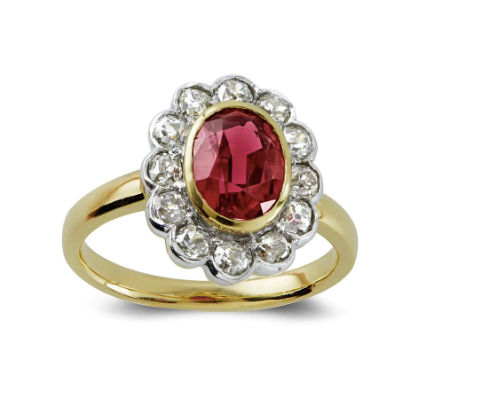 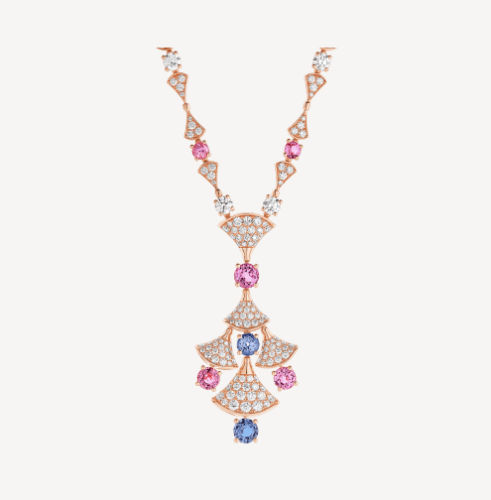 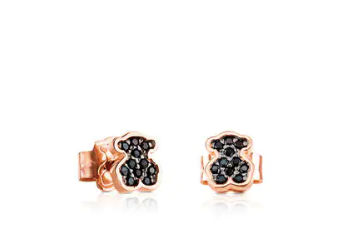 Timeless yet elegant, the Pragnell Vintage ring is ideal for those who love jewellery with character. This 18k yellow and white gold spinel ring exudes eccentricity and class. We adore the subtle take on a beautiful floral bloom as the brilliant cut diamonds surround the red oval cut spinel.

It’s love at first sight with the extravagant Bulgari Diva’s Dream necklace. The beautiful rose gold necklace is decorated with round brilliant cut diamonds, spinels and pavé diamonds. Taking inspiration from the vivid mosaics of the Roman baths, the jewel’s fan-shaped motif injects the right dose of drama without overdoing it.

Famed for its signature bear motif, Tous’ motif earrings with spinels make a great addition to your collection. Made to be worn for every occasion, the adorable studs are subtle yet versatile. Plus, it’s excellent for those with multiple ear piercings who want to experiment with various shapes and sizes.