Double trouble: Two-tone luxury watches to elevate your style to the next level

There are many different types and variations when it comes to luxury watches. This ranges from minimalistic to extremely extravagant and everything else in-between. Complications are also another popular variation of luxury watches, something which appeals to a niche group of collectors and enthusiasts. However, two-tone luxury watches are something special due to its innate appeal in terms of aesthetics.

It’s nothing new to merge two different coloured metals together in a single timepiece, which is what Rolex is very well-known for. This can be traced back to the 1930s with its steel bracelets links pairing with its bezel and crown in yellow gold. Over time, two-tone luxury watches became more and more apparent in the world of watches, particularly in the 1980s.

These days, more and more watchmakers are diving into the market of two-tone luxury watches to appeal to a wider audience. Now, collectors, enthusiasts, and everyday wearers are spoiled for choice when it comes to deciding on a favourite two-tone timepiece. While it will be hard to decide on which suits you best, one will always have to consider whether the two-tone does itself justice.

The heavy usage of rose gold in today’s modern interpretation of two-tone timepieces is essentially what yellow gold used to be in the 1980s, for instance.

Fret not though as we have here five two-tone luxury watches that will appeal to you in every way imaginable. Read on for more down below to find out which timepiece suits your wrist best.

Rolex has always been known for its two-tone timepieces, whether it’s on the Daytona, Submariner, or even the Sky-Dweller. Baselworld 2018 was rocked to its core when Rolex introduced a trio of new GMT-Master II watches with one of it being a two-tone Everose gold (Rolex’s patented rose gold alloy) and stainless steel. At the front of the GMT-Master II 126711 CHNR is a 40mm steel Oyster case while the Everose gold accents are draped all over. This includes the crown, the Oyster bracelet links, and rotating bezel. Its ceramic bezel also features a two-tone shade of black and brown ceramic accompanied by rose gold numerics. Of course this is a signature Rolex move; the Rolex “Batman” GMT-Master II 116710 BLNR and the Rolex “Pepsi” GMT-Master II 126710 BLRO are just classic examples of what the collection is known for – bi-coloured bezels. Cartier is widely regarded as one of the frontrunners when it comes to jewellery while its watches are slowly catching up. One collection in particular that needs no introduction is the Cartier Santos-Dumont, an iconic timepiece from the French conglomerate. The latest Cartier Santos-Dumont that made its debut at SIHH 2019 comes in various shades with one of them being a two-tone steel and pink gold version. What’s great about the Cartier Santos-Dumont revamp is that it doesn’t stray away from the original Santos pricing, meaning that it is still somewhat affordable while still maintaining its luxury status. 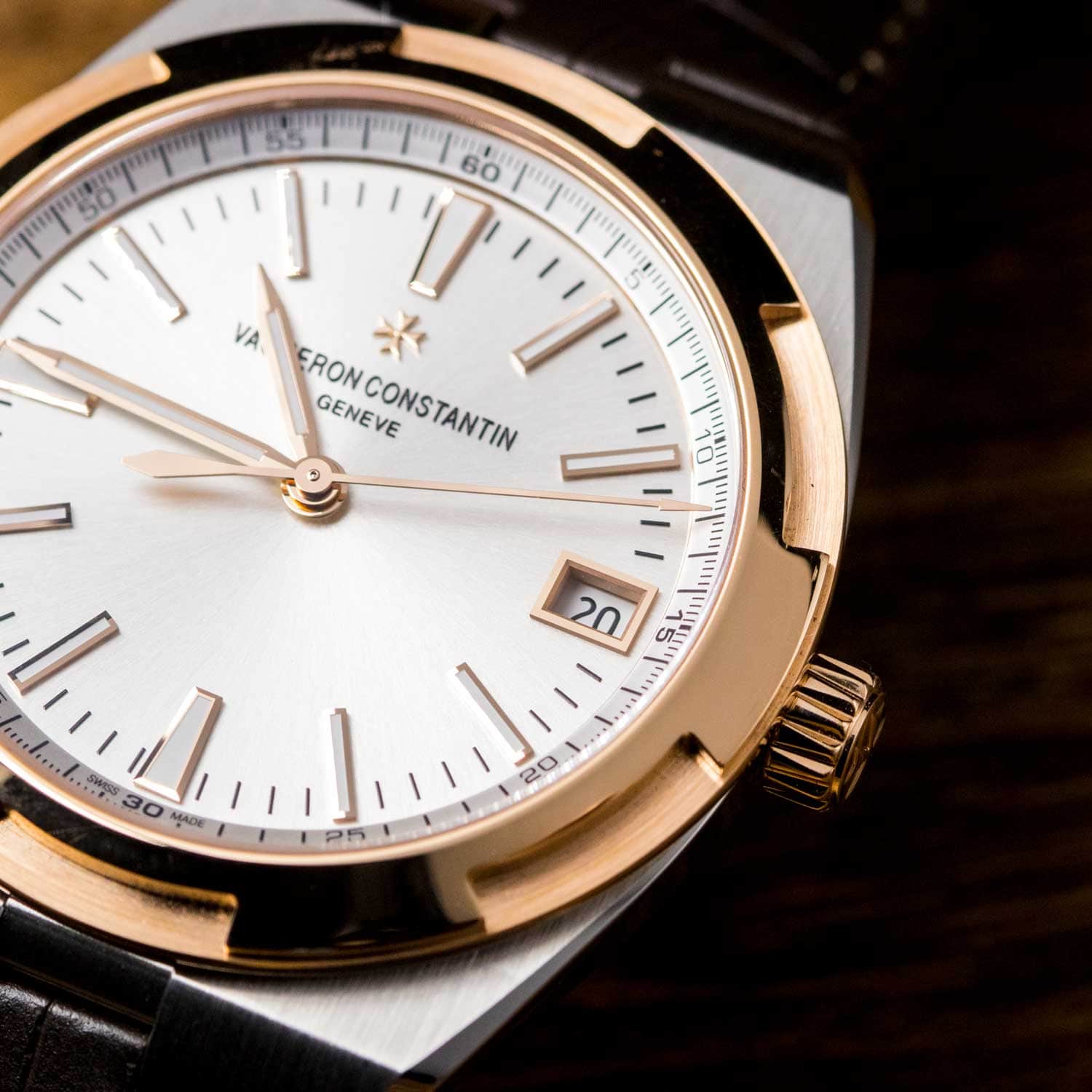 Vacheron Constantin is no slouch when it comes to luxury Swiss-made watches and its Overseas collection is living proof. While already two years old, the Overseas collection did see the addition of two two-tone variations — a chronograph and a date model. Right off the bat, the 41mm stainless steel case comes with a rose gold bezel in a Maltese cross-inspired silhouette. There is also a rose gold winding crown as well as the case, which sees the indexes, centre hands, as well as the silver dial receive the rose gold treatment. To give you some form of variety, the watches also come with interchangeable straps, one of alligator leather and the other made of rubber. Patek Philippe is a brand that many would know of, whether or not you’re a collector or an enthusiast. The Swiss luxury watchmaker is considered to be one of the most prestigious brands one can own with its famous slogan “You never actually own a Patek Philippe. You merely look after it for the next generation”. With that said, the Patek Philippe Nautilus is the type of watch you will surely want to keep for your offspring. Considered to be one of the ‘Holy Trinity’ of watchmaking, the Nautilus Ref. 5980/1AR-001 two-tone of rose gold and stainless steel joined the Patek Philippe sports watch collection back in 2013. The rose gold does its job well on the octagonal bezel, case, and even its integrated bracelet. Patek Philippe also throws in a vibrant blue dial with its signature horizontal grooves for a good contrast of colour. Omega isn’t prominent when it comes to two-tone watches but when it pulled out the Seamaster Diver 300M for its 25th anniversary, it had to do something special. The particular Omega Seamaster Diver 300M ref. 210.22.42.20.01.002 featured rose gold alongside sleek stainless steel as well as a sea of black for good measure. Omega’s very own proprietary rose gold alloy known as Sedna gold bathes over the 42mm stainless steel case as well as the winding crown and the helium escape valve. In addition to that, Sedna gold is paired with the black ceramic dive bezel while the dial comes with a matching black wave pattern. There is also Sedna gold components within the dial, in particular around the indexes and the centre hands. If it’s black rubber strap isn’t your thing, you can swap it out for a NATO strap.

Omega Rolex Cartier Vacheron Constantin Patek Philippe two-tone luxury watches
Wi-Liam Teh
Senior Writer
Wi-Liam is a geek at heart with a penchant for tattoos. Never without a drink in hand (preferably whisky, gin, or Guinness), he is also a writer by day and a keyboard warrior by night. On his day off, he masquerades as a streetwear and sneakerhead enthusiast while his bank account says otherwise.
Tech Cars Watches Entertainment Food Drinks