5 watches that celebrate sustainability by putting the environment first

You would never think that a relatively small accessory like a watch would have profound effects on the environment, nor have the ability to make a noticeable difference. These firms however, are changing that mindset, one watch at a time.

Sustainability has been a massive buzzword for the past few years. Never mind that there’s now a giant trash vortex called the Great Pacific garbage patch between Hawaii and California, estimated to be three times the size of France. Half of the world’s tropical forests have also been cleared, and as Sir David Attenborough has brought to our attention on Netflix’s “Our Planet”, walruses are falling off cliffs due to the lack of sea ice in the Arctic.

Then there are mines which source for gold unethically while causing irreversible topological damage to the planet. As an industry that constantly taps into raw materials, precious stones and metals for production, it’s about time watch manufacturers paid more attention to being kinder to the environment.

To get you started on your journey, here are five watches that celebrate sustainability. As an incredibly accomplished explorer and environmentalist, Mike Horn knows a thing or two about how the environment is deteriorating at an alarming rate. The latest of his longstanding partnership with Panerai sees a distinctive take on the Submersible, as well as an expedition with him to the Arctic.

Marked by blue lumed markers throughout, the 19-limited-edition timepiece also sports 47mm cases made from Panerai’s Eco-Titanium, a recycled form of the precious metal. The titanium relief bezels add visual depth to the diving watch, which has the ability to withstand up to 300m underwater. Add to that a strap made of recycled material, and you’re ready to embark on your trip of a lifetime with Horn. 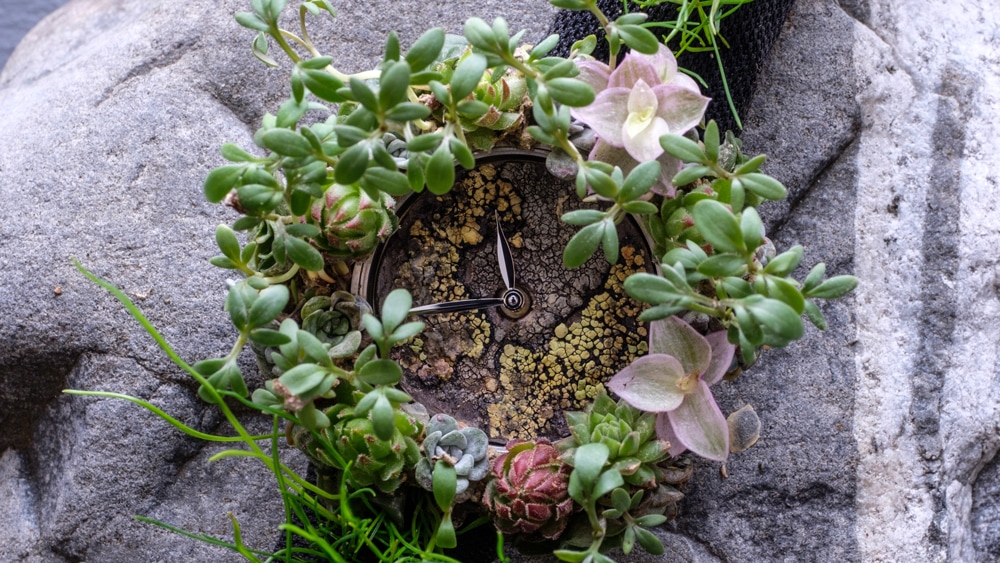 We didn’t think it possible, but the worlds of horticulture and horology have actually collided thanks to H. Moser & Cie, which launched its Nature Watch at SIHH 2019 to plenty of curious stares. The watch is a essentially a garden on your wrist. Its steel case is adorned with soil, succulents, moss, cress, spiderwort, and even mini Echeveria, each blooming around a dial crafted from lichen and natural stone from the Swiss Alps. The strap is also made of grass.

This whimsical timepiece serves to highlight the brand’s commitment to zero carbon footprint in its manufacturing process, alongside using only fair trade gold. Besides being a tiny work of landscaping art outside, the hand-woven HMC 327 manufacture caliber is well-equipped to last about a lifetime, a constant reminder of time and its fragility.

The Superocean has always been a diving watch that celebrated the deep seas, but this seals the brand’s commitment to preserving oceanic environments and reducing aqua waste by working with Outerknown. The sustainable clothing company is co-founded by world surfing champion Kelly Slater, and is responsible for supplying Breitling with Econyl yarn — a material made from nylon waste from oceans — for its NATO straps.

The 44mm watch is paired with a black DLC-coated stainless steel case, and sees a COSC-certified chronometer that promises all the reliability and accuracy you could want from a Breitling. 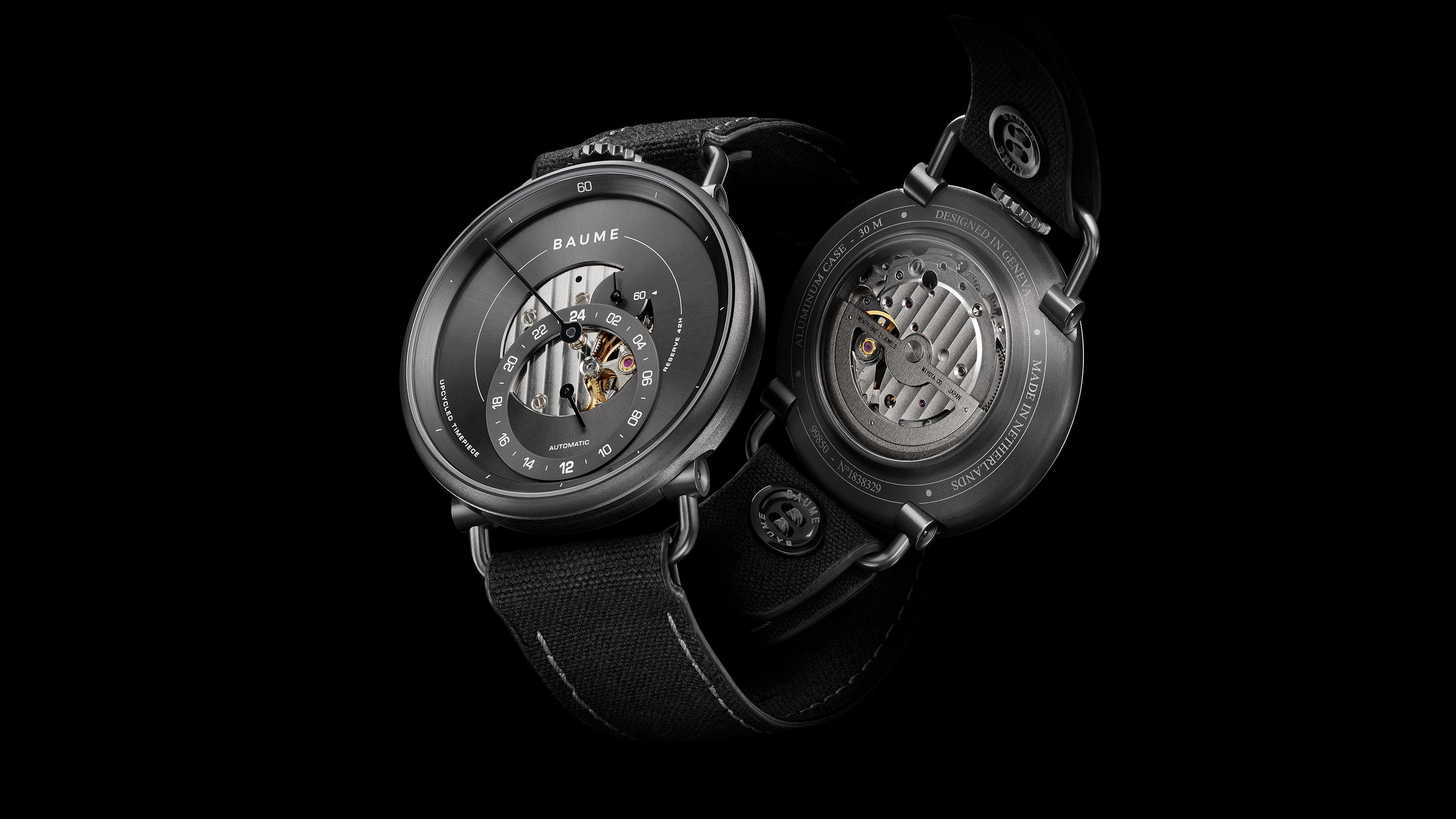 Baume might be a sub-entity of the storied Baume & Mercier, but it’s paving its own way in the industry with entry-level watches that are sustainably produced.

While suitably more affordable, the watches target a mindset rather than age group. Precious metals, stones, and animal materials are excluded from the extensive line-up of customisable options, and only recycled and natural materials will be used. The brand’s flagship, the Iconic Series, sees a case made of partially-recycled aluminium, and paired with a strap made of recycled plastic. An automatic caliber from Miyota powers the minimalist watch from within. 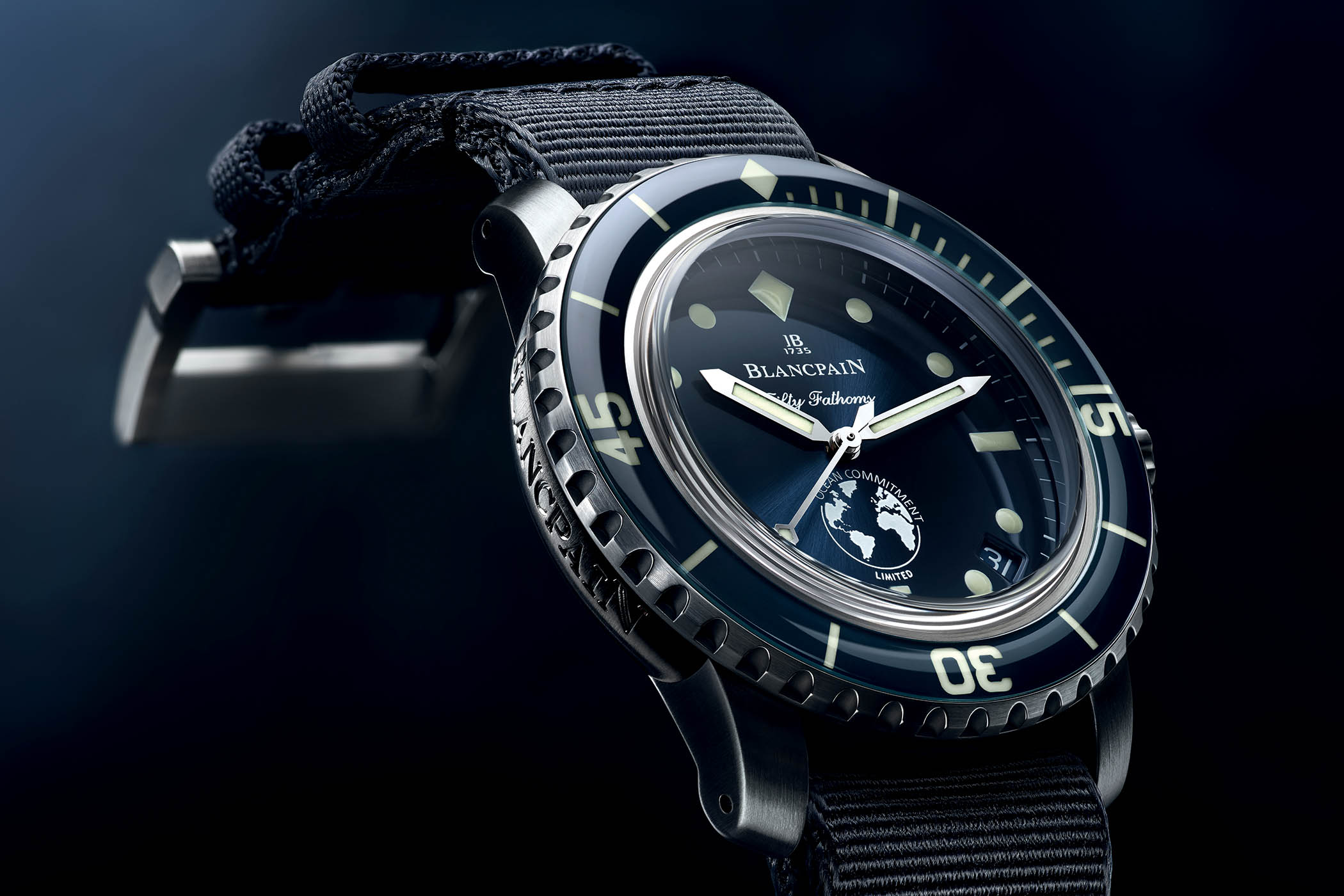 Now Blancpain’s third Fifty Fathoms that’s dedicated to ocean commitment, this limited edition bears several unique features from its standard models. While most Fifty Fathoms are 45mm, this comes in a smaller 40.3mm satin-brushed stainless steel case, with a largely redesigned dial rendered in blue. Even its unidirectional sapphire bezel gets the cerulean treatment.

Still the robust dive watch sees a water resistance well into the 300m regions, with the same well-known calibre 1151 automatic movement within. Like the dial, its gold winding rotor is proudly marked with the “Ocean Commitment” inscription.

Style Timepieces Luxury Watches Sustainability
Shatricia Nair
Deputy Editor
Shatricia Nair is a motoring, watches, and wellness writer who is perpetually knee-deep in the world of V8s, tourbillons, and the latest fitness trends. She is fuelled by peanut butter and three cups of coffee a day.
Motoring Wellness Watches