All the pieces from the Longines Gold Equestrian Pocket Watch collection

Pocket watches are steadily coming back into play with the help of Longines. It recently showed off its highly limited-edition Longines Gold Equestrian Pocket Watch collection, which pays tribute to horseback riding. This is all thanks to Longines’ longstanding history with the equestrian world.

This dates back to the 19th century when both pocket watches and equestrian were at its peak. While the former has slowly fallen off the pedestal in place of wristwatches, the equestrian world is still a prestigious event that many will flock to. Whether it’s show jumping or horse racing, Longines has found the perfect way to bridge the gap.

There are eight different variations from the Longines Gold Equestrian Pocket Watch collection, all of which features different engravings on the back. This ranges from horses to riders and jockeys. The entire collection is highly limited with only 20 pieces for each model. To sweeten the deal, each pocket watch is covered in 18-carat rose gold.

With a total of eight different watches making its way into Malaysia, we take a look at some of our favourites from the collection. Be sure to scroll down to read on for more.

There is no better way to pay homage to its heritage of over a century in the world of horse racing than with a limited edition pocket watch. The Longines Equestrian Pocket Watch Jockey 1878 is hewn from solid 18k rose gold with an equestrian-themed case back featuring an engraved motif of a jockey and its horse. The Pocket Watch Jockey 1878 is an exact replica of Longines’ first pocket watch produced with a chronograph complication. The white dial of the watch is kept in its traditional design with slim Roman numerals and an Arabic minute tracker. The Longines Equestrian Pocket Watch Sweet Horse 1881 drew inspiration from a silver Savonnette pocket watch from the same year. It has two different motifs — a horse’s head as well as a floral pattern, both of which were elegantly designed. One motif will sit on the case back while the other rests on the capsule of the dial. It also has a hand-wound mechanical movement on a 50mm dial with a small seconds sub-dial at 6 o’clock. The pocket watch also carries elegant blued steel Breguet hands. The Longines Equestrian Pocket Watch Gentleman Farmer 1910 reflects on the brand’s history within the equestrian world by reinterpreting a model from 1910. The 18-carat rose gold Lépine pocket watch has an engraving of a gentleman on his horse. The pocket watch is 48.75mm in diameter with a hand-wound mechanical movement. The design of the sides and bow were based on the original model, which is housed in the Longines Museum in Saint-Imier, Switzerland. 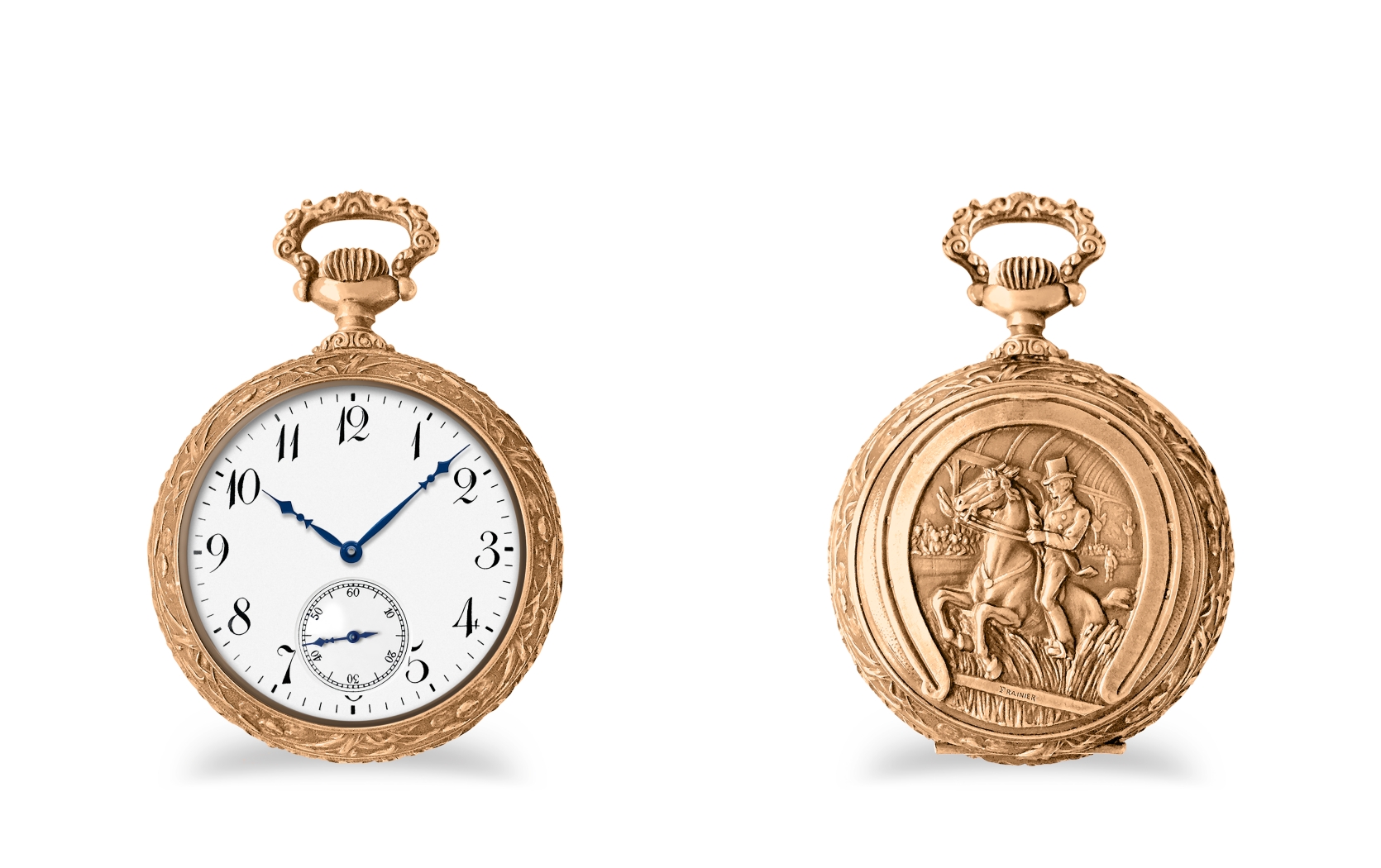 The engraving for the Longines Equestrian Pocket Watch Roots and Wings 1910 features a grand eagle with wings spread in front of a ship. There is also an engraving of a young woman with wings and a horse. There are two different design motifs in total — one on the front and the other on the case back. Much like its counterparts, the pocket watch also comes with a small seconds sub-dial at 6 o’clock with elegant blued steel hands across its 49.50mm dial. 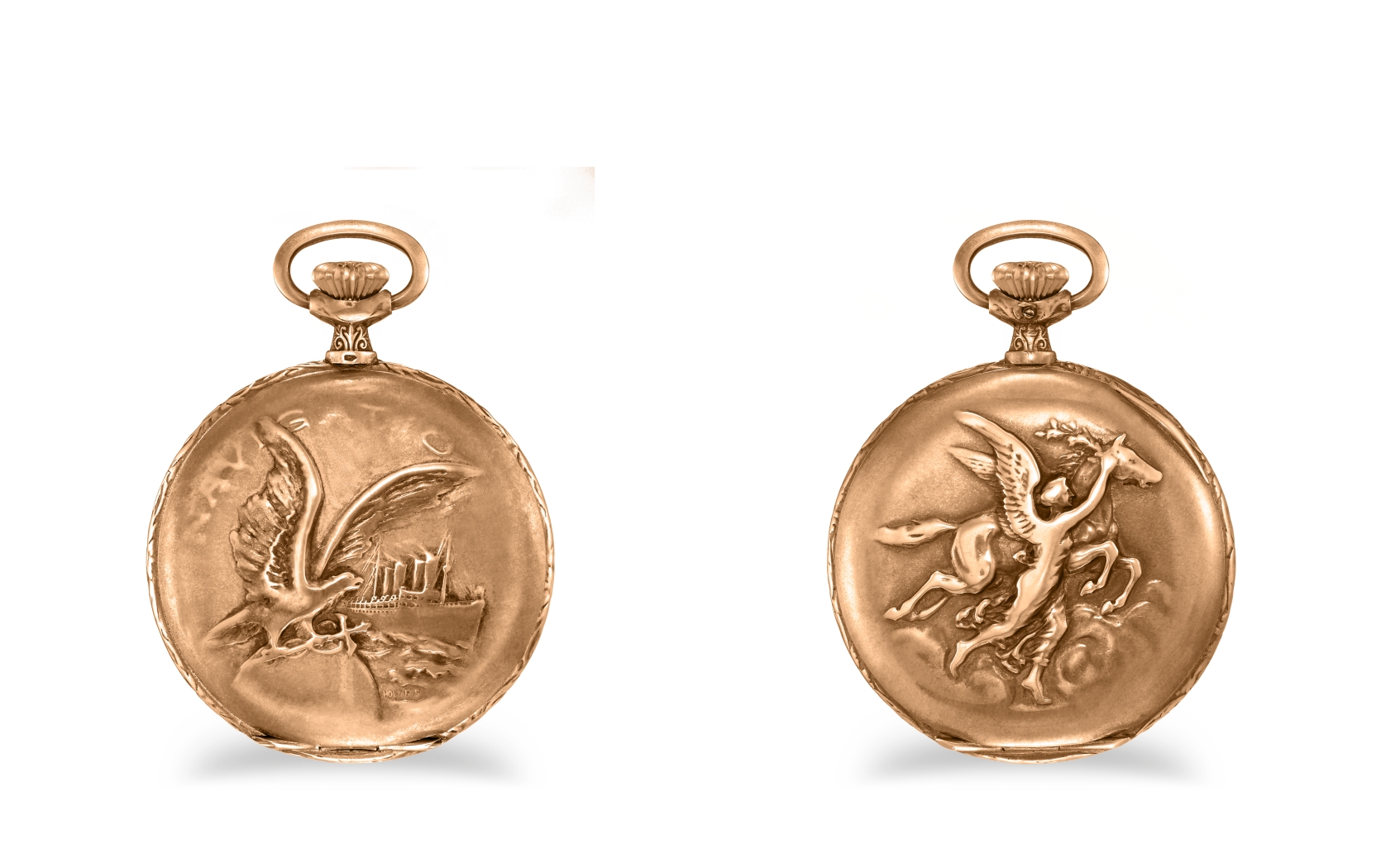 The Longines Equestrian Pocket Watch Horses Trio 1911 was inspired by a Lépine pocket watch from the same year, which is housed in the Longines Museum. In 1912, the brand was part of a show jumping competition for the first time. On the case back is a skillfully designed trio of horses in 18-carat rose gold. The heads of the horses stand out against a background of intricate foliage while the plant motif appears in the middle of the piece. Longines’ passion in equestrian comes second to none, especially given its association with some of the most prestigious horse races around the world. Its modelled after the original piece from 1911 with the engraving of three horses in the heat of the race. This symbolises the movement and energy of the sport. The engraving resides on the front of the watch with a plain case back while the dial measures up to 53.35mm in diameter. 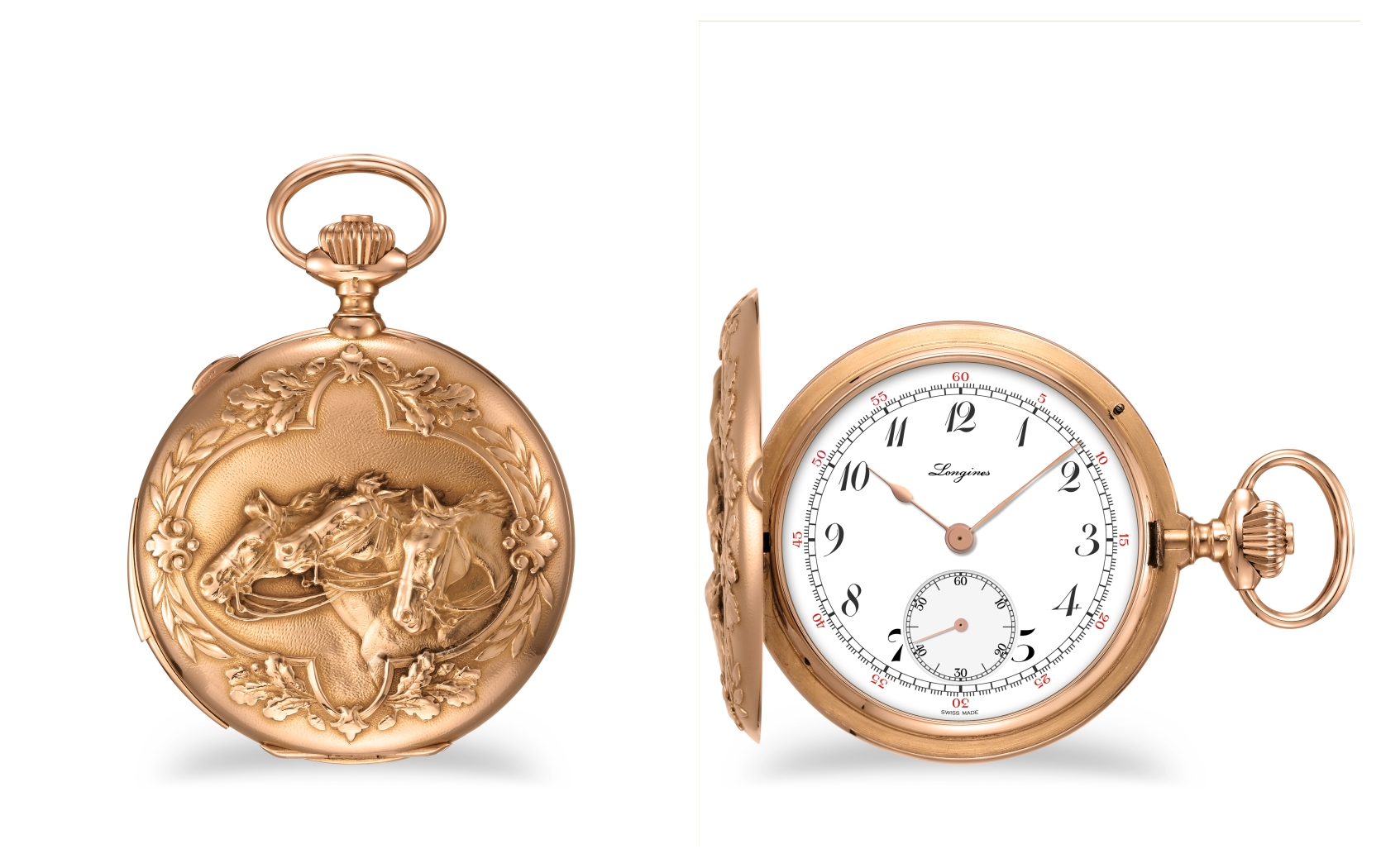 Another pocket watch from Longines that drew inspiration from a Savonnette pocket watch from 1912, The Longines Pocket Watch Farm House 1912 depicts a farmhouse in a bucolic country landscape traversed by a rider on his horse. There are two different motifs with one at the front and the other on the case back. At the heartbeat of the pocket watch lies a hand-wound mechanical movement while its dial measures up to 48mm. The last of the series is the Longines Pocket Watch Sport 1929, which pays a vibrant tribute to flat races based on a 1929 model. The engraving has two jockeys and their horses racing side by side in the heat of the moment. The design motif is on the case back whereas the front houses the 48.20mm dial with a smaller sub-dial at 6 o’clock. The white dial has large Arabic numerals, much like all the other pocket watches as well.

All images courtesy of Longines. 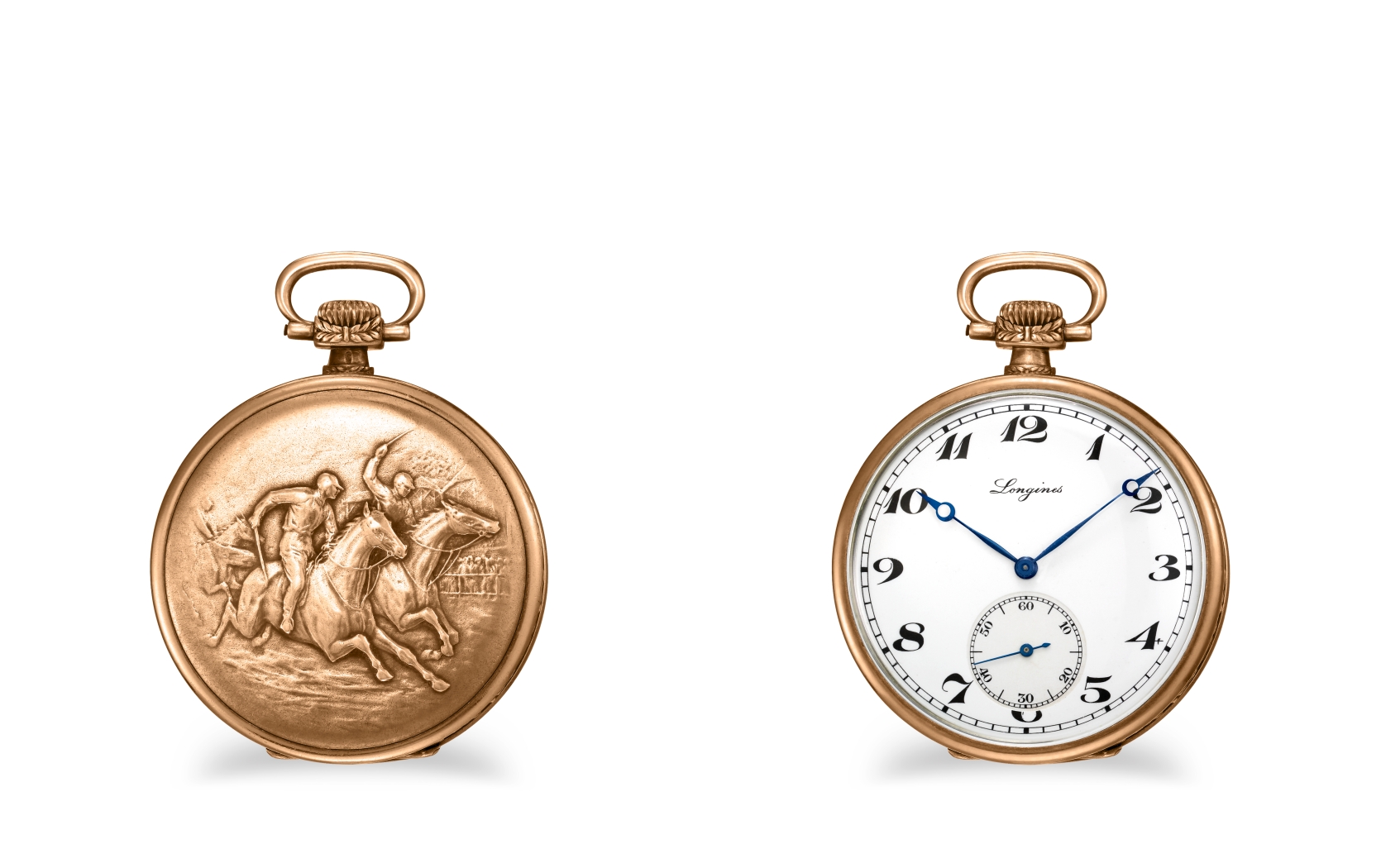 Horse Racing Longines Pocket Watch Equestrian longines equestrian pocket watch
Wi-Liam Teh
Senior Writer
Wi-Liam is a geek at heart with a penchant for tattoos. Never without a drink in hand (preferably whisky, gin, or Guinness), he is also a writer by day and a keyboard warrior by night. On his day off, he masquerades as a streetwear and sneakerhead enthusiast while his bank account says otherwise.
Tech Cars Watches

Style
Anya Hindmarch does a 180º and releases “I Am A Plastic Bag”
Living
Roberto Guiati on his success and life principles as the Man of Today
Style
Tommy Hilfiger and Lewis Hamilton champions sustainability at LFW
Style
Why is Richard Quinn a rising star in British fashion?
Travel
Curio Collection by Hilton to open a new property in Langkawi by 2023
Style
Watch: The Burberry Autumn/Winter 2020 runway show live from London
Style
Jennifer Lopez launches her own fashion accessories label, JLo Jennifer Lopez
Style
Braun Büffel channels individualism and diversity in its non-conformist SS20 collection
Style
Puma locks down J. Cole in an official multi-year partnership
Sign up for our newsletters to have the latest stories delivered straight to your inbox every week.