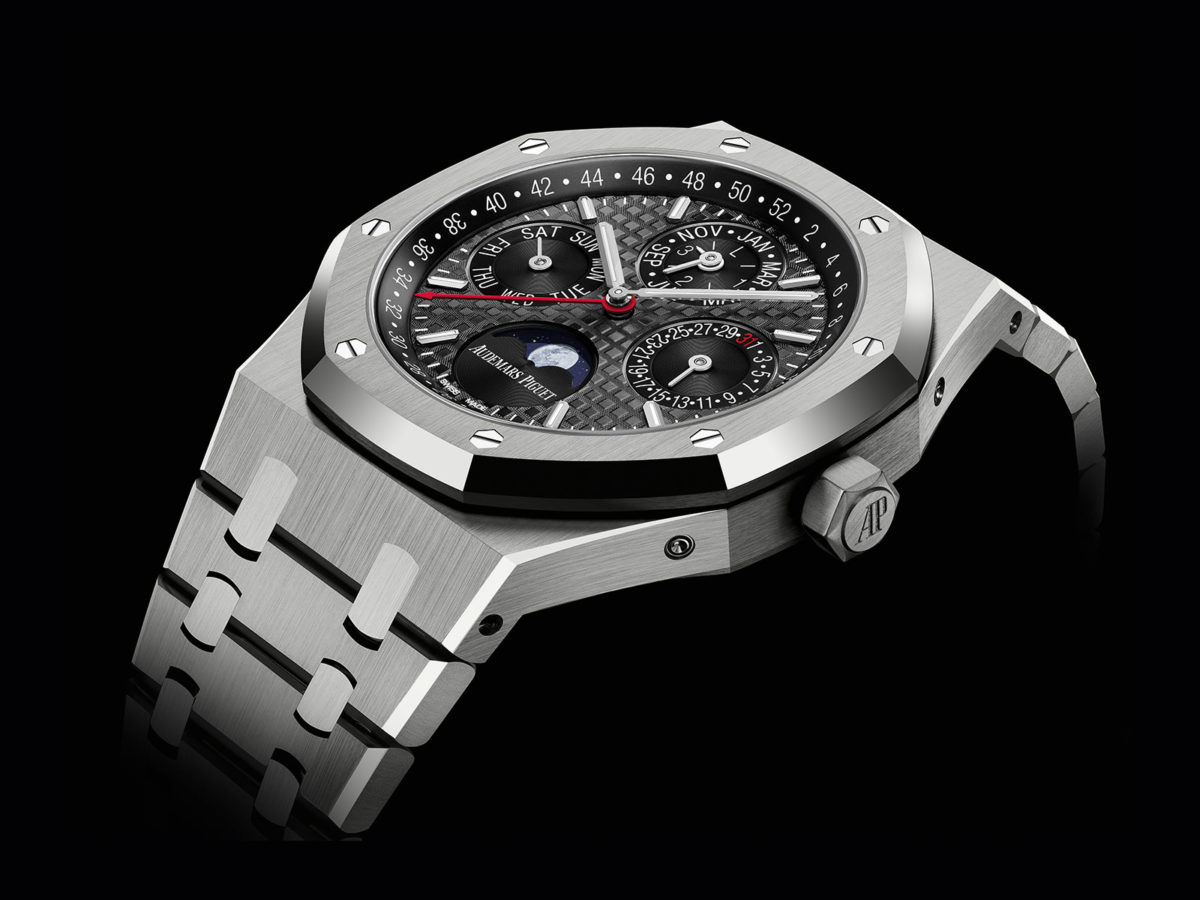 Regional LEs (limited editions) are something that Audemars Piguet has gotten really good at hammering out over the past few years. So far, the Swiss marque has released sought-after national/regional exclusives in a total of six markets: including (but not limited to) Japan, Indonesia, Switzerland, and the HKSAR. The newest region to join this lineup is Mainland China. Last weekend, a coterie of local journalists, KOLs, and VIPs rendezvoused in Beijing for the launch of the new watch in question — incidentally, an interesting by-product of the new generation of watch collecting that seems to have taken social media by storm.

At its most fundamental, this China LE is a Royal Oak Perpetual Calendar — conforming to the same technical specs that collectors who have handled any Ref. 26574 models will be familiar with. The case material, however, is a first for the Royal Oak collection: a smoky grey titanium, decorated in AP’s signature combo of brushed and polished finishes.
The slate dial features the all-over grande tapisserie that is so essential to the Royal Oak’s overall design, overlaid with the various perpetual calendar registers at 12, 3, 6, and 9. Rather than opting for dragons, shishi or (heaven forbid) rats, the only overt references to Chinese culture are slipped into the week-of-year and day-of-month displays. A muted, sumptuous shade of red is used for the arrow hand that indicates the week of the year, whereas the 31st day of the month is conveniently highlighted in the same.

Without wishing to take away from the generally desirable nature of this LE, the most intriguing part of its development curve revolves around the involvement of watch collecting heavy Austen Chu (a.k.a. @horoloupe). According to AP, the prominent Royal Oak collector “contributed toward the [watch’s] overall aesthetic”: likely to be the driving force behind this Perpetual Calendar’s clean, fairly harmonious layout and emphasis on user functionality. (On that note, this LE is configured with the same recessed pushers and extra-thin in-house movement that are endemic of the 26574.)
Given the Royal Oak China Edition’s extremely finite production numbers — AP has announced that only 88 pieces will be going into boutiques on the Mainland — and the pre-CNY timing of the release, it’s hard to imagine that lobby-level enthusiasts are going to have much luck acquiring one of these things in the wild. Nevertheless, from a purely anthropological perspective, the success of this LE — propped up by the clout of a popular online watch collecting personality — could have wider ramifications for the industry. Definitely one to keep an eye on.

Watches Audemars Piguet Limited Edition Watches Royal Oak Perpetual Calendar
You might also like ...
Style
Inside Code 11.59 by Audemars Piguet: An evolution of the Swiss Manufacture’s design DNA
Style
Malaysian watch brand Ming snags a win at 2019 Grand Prix D’Horlogerie De Genève
Style
SIHH rebrands itself into Watches & Wonders starting next year
Style
Everything you need to know about buying your first Patek Philippe
Lifestyle Asia
Here's where you can read the latest news and stories from Lifestyle Asia and our sister titles PrestigeOnline and Augustman, curated from all of our editions in Hong Kong, Singapore, Kuala Lumpur, Bangkok and India.
Luxury