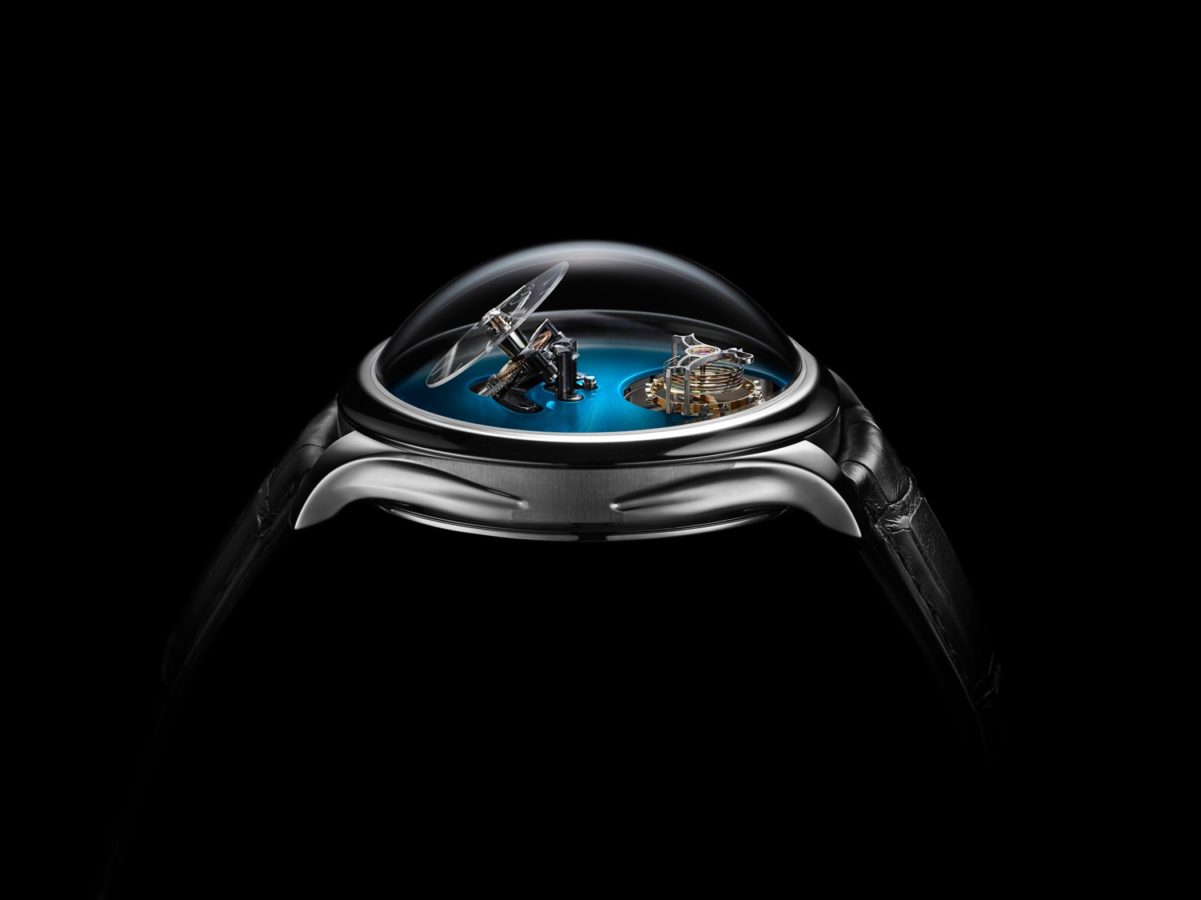 Two much-loved independent watchmakers celebrate 10 years of friendship in a seriously cool way — with a duet of collaborative editions, each cribbing inspiration from the other’s brand.

If you want to get a sense of the closeness, camaraderie and downright mutual respect that exists between watchmakers, look no further than MB&F and H.Moser.

For the past 10 years, both brands’ respective men-in-charge (Edouard Meylan and Max Büsser) have been steadily collaborating on an increasing number of projects. Most notably, Precision Engineering AG, Moser’s sister company, is a longtime supplier of balance springs to MB&F.

As such, I was delighted (if unfazed) to learn last week that both brands were releasing not one, but two limited editions. Available in nine variations (all cased in stainless steel) with a production run of 15 apiece, these dual-branded H.Moser x MB&F models mutually reinterpret the signature aspects of each other’s brand in a way that feels fun, thoughtful and appreciative. Recently, we were invited into Moser’s Hong Kong HQ for a close-up look at the different variations, four of which you’ll see photographed in the metal below.

You might also like…
Style
Splurge: This RM152,442 MB&F clock has legs that go on for days
Gear
Splurge: Prepare for takeoff with MB&F’s “Destination Moon” table clock

On the Moser side of things, we have the ref. 1018 Endeavour cylindrical tourbillon — a clear nod to MB&F’s hyper-complicated ‘Flying T’. At 42mm x 19.5mm, it falls squarely into ‘conversation starter’ territory, helped immensely (in terms of visual presence) by a giant domed sapphire crystal and clearly separated dial elements.

The curvature of the lugs and crystal make this a difficult prospect as a dress watch; but for the brief period I had it on wrist I never got the impression of a watch that’s overly showy. Yes, it’s a veritable hypercar — to use a vehicular analogy — but one that understands the importance of blending sheer mechanical brawn with beauty. Moser’s watchmakers have offset MB&F’s more whimsical design elements with the stealthy aesthetic of the Endeavour; giving collectors a piece that’s relatively restrained. All the more impressive, given how much horological firepower is being brought to bear.

In the mould of the ‘Flying T’, hours and minutes are displayed using a small sapphire dial blank (it has been inclined at a 40-degree angle, so as to enhance wearer visibility). At 12 o’clock, a large recess has been cut out of the dial — shaded in Moser’s signature ‘funky’ blue — giving you a broad view of the oversized, cylinder-shaped tourbillon. The detached time and tourbillon feed into the watch’s overall profile in a really satisfying way, akin to martian structures looming over a shimmering surface of deep blue water.

Without seeing the others in the metal, I can only assume a similar visual sensation is achieved with the cosmic green, red and ‘aqua’ examples (the last being a boutique exclusive for Saudi retailer Seddiqi & Sons). For movement nerds: the cylindrical tourbillon is powered by Moser’s HMC 810, combining an above-average beat rate (21,600 vph) with 72 hours’ worth of power at full wind.

The H.Moser x MB&F Endeavour cylindrical tourbillon in stainless steel is available in five variations, each limited to 15 pieces.

A riff on an existing MB&F model, the new LM101 seems (at least to me) to be the more grounded half of the H.Moser x MB&F collab. The origins of a Moser-fied LM101 design go back several years. Initially, Max Büsser actively encouraged Moser’s watchmakers to offer their perspective on what the ‘purest’ distillation of MB&F would look like. This culminated in the decision to transplant three signature Moser elements into the framework of the LM101. The end result is definitely my favourite of the new releases, simultaneously offering a creative meditation on the fundamentals of mechanical watchmaking and an aesthetic that shows a tremendous (and beneficial) amount of self-restraint.

In stark contrast to MB&F’s standard LM101, this edition eliminates the ‘floating dials’ traditionally used for the time and power reserve, replacing them with two unadorned handsets, inspired by the kind Moser uses in its Concept line.

A quick spin around the dial makes it clear that with this design, there’s an emphasis on blurring the boundary between the internal and the external (incidentally the only branding you’ll find is on the reverse, engraved on the watch’s caseback and movement). These changes all serve to focus attention on whatever elements remain.

Futurism is a really crucial part of MB&F’s designs, and the execution of this particular dial delivers on that in spades: in profile, the suspended balance wheel brings to mind images of the USS Enterprise, cresting the atmosphere of some far-flung alien planet. I could see how the reading of the power reserve might occasionally be frustrating, but it’s a small price to pay for a design that visualises watchmaking’s mechanical heart in such a fantastical, thought-provoking way.

The H.Moser x MB&F LM101 in stainless steel is available in four colourways, each limited to 15 pieces.

Style
Gucci’s digital fashion show will be a 12-hour-long live stream
Beauty & Grooming
Is natural deodorant worth it, or just a smelly gimmick?
Living
The best superfoods for a clearer complexion and glowing skin
Food & Drink
Here are the 5 best udon places you can find around KL
Style
Fashion Obsessions: Rimowa Eyewear, Starbucks x Undefeated, and more
Beauty & Grooming
How to properly use Instagram’s favourite beauty tool — the facial roller
Food & Drink
Learn more about wine from these 7 podcasts
Food & Drink
6 new restaurants & cafes to check out this July 2020
Beauty & Grooming
Lucia Pica takes inspiration from the Dubai desert with the Chanel Desert Dream collection
Sign up for our newsletters to have the latest stories delivered straight to your inbox every week.