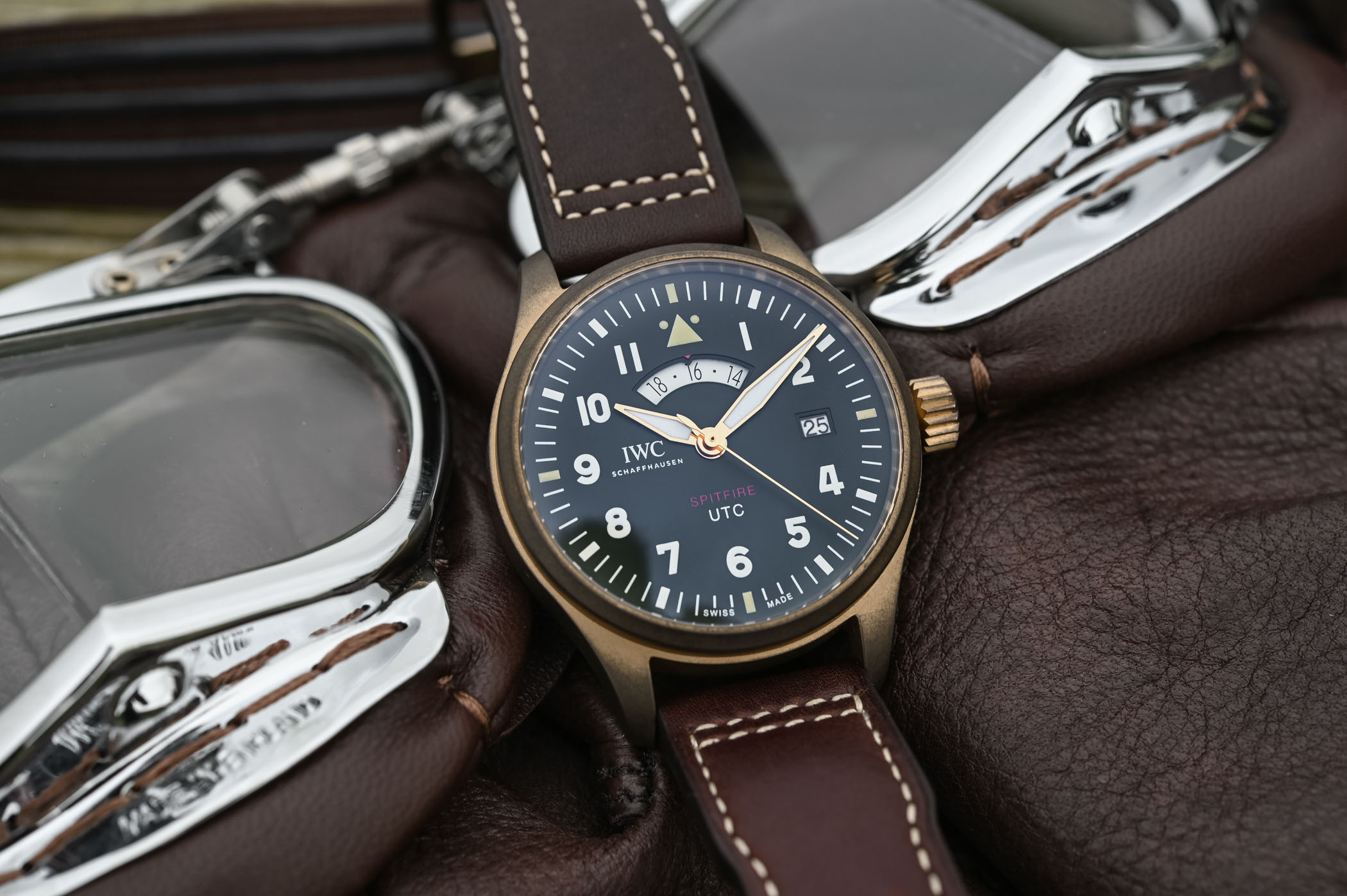 Much like diving watches, there is a special group of people in mind when it comes to aviation watches. In the world of luxury watches, there are plenty of able-bodied brands that have dedicated its entire identity into making aviation timepieces. Then of course, there’s IWC Schaffhausen who have been creating aviation watches for over 80 years, bringing the dream of flying onto our wrists.

IWC has a storied history with military aviation with the help of the Mark 11, which was manufactured for the British Royal Air Force back in 1948. It was used by both pilots and navigators for celestial navigation in the cockpit up until the early 1980s. The Mark 11 was also the inspiration behind the new IWC Spitfire collection of watches, which was named after a legendary British fighter plane.

IWC is introducing four new and exclusive in-house calibres for the new fleet of Spitfire watches. These calibres are the heartbeat of the new Spitfire collection, which includes a chronograph, a perpetual calendar, a double moon phase, and even a UTC display.

While the new Spitfire alongside the Top Gun and Le Petit Prince collections have already been showcased in SIHH 2019, it has finally flown its way into our shores. Be sure to scroll down to view some of the latest pieces IWC has to offer with its Spitfire fleet of watches alongside a few others.

Style
Who is the holy trinity of watches in haute horlogerie? 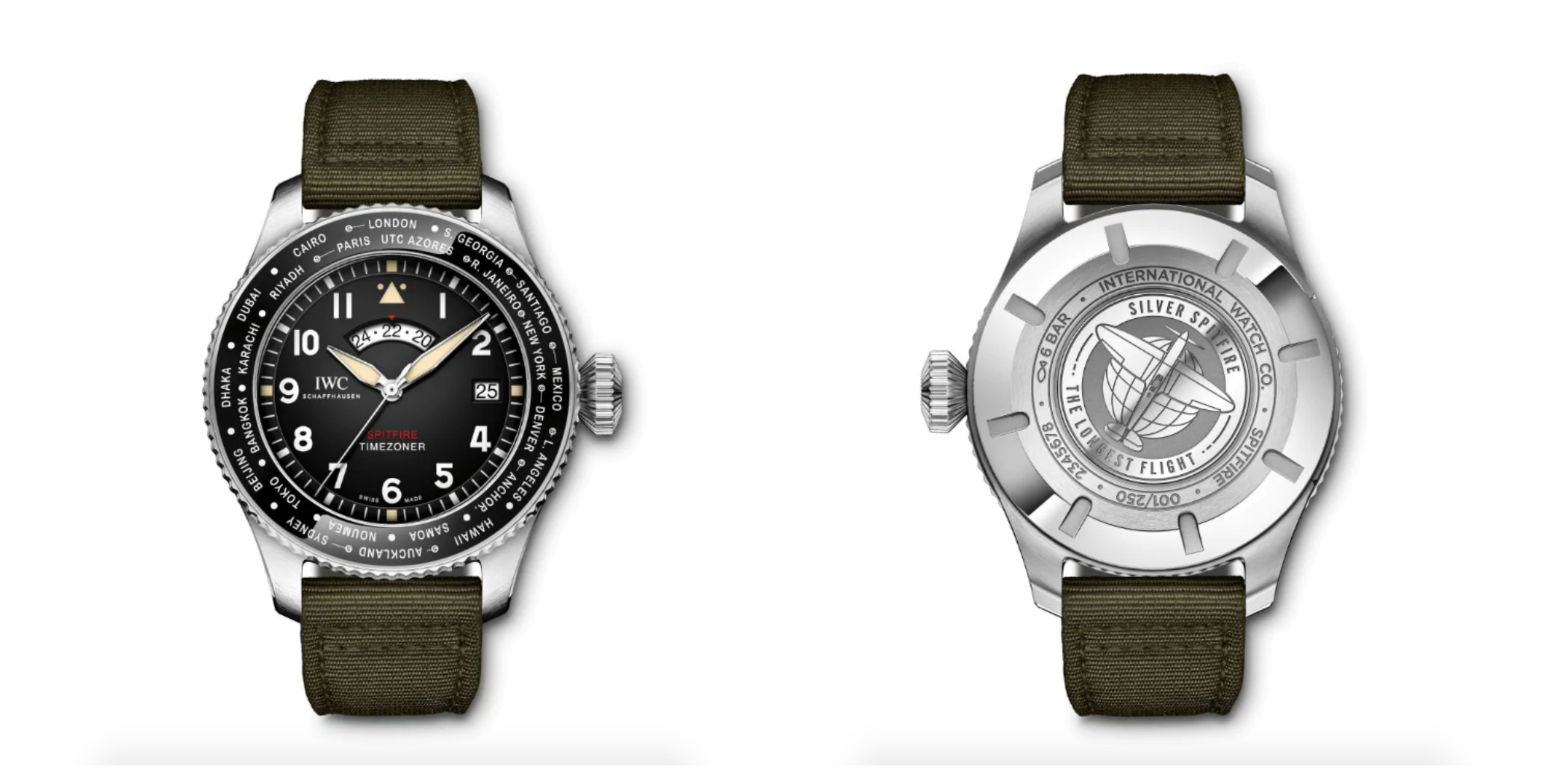 The IWC Pilot’s Watch Timezoner Spitfire Edition is dubbed as “The Longest Flight” and is known as one of the most limited edition watches with only 250 available worldwide. The watch is dedicated to the “Silver Spitfire – The Longest Flight” project. It was created specifically for two pilots, Steve Boultbee-Brooks and Matt Jones to assist them in their circumnavigation of the entire globe in a Spitfire. By simply rotating the bezel, it sets the watch to a different timezone and the hour hand as well as the 24-hour display and the date will adjust itself accordingly. All this is powered by the 82760 calibre that is its very own IWC-manufactured movement with its own self-winding capabilities. The watch itself is housed in a stainless-steel case accompanied by a black dial and finished off with a green textile strap. 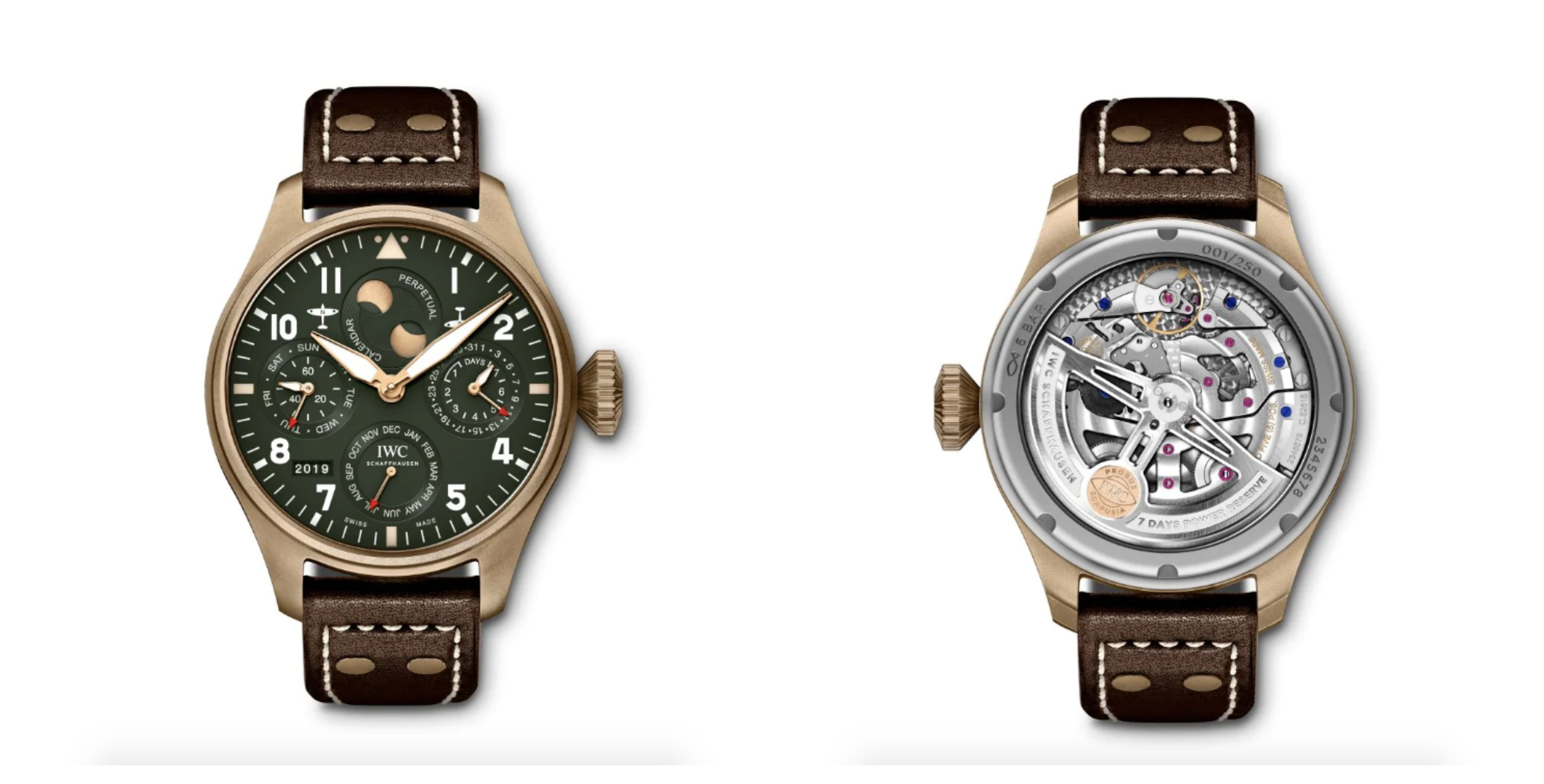 Another watch that is limited to just 250 worldwide, the IWC Pilot’s Watch Spitfire Perpetual Calendar forms its own unique character thanks to its bronze case, olive green dial, and brown calfskin strap. Over time, the bronze case will develop an individual patina, giving it a uniqueness to its look. On the dial you can find four subdials, which will display the day, date, month, and year as well as a perpetual moon phase for both the northern and southern hemispheres. The perpetual calendar of the watch is considered to be one of the most fascinating in haute horlogerie complications as its mechanically programmed for the next 577 years. The IWC-manufactured 52615 calibre also comes with its own Pellaton automatic winding system with two barrels, used to build a power reserve up to seven days. 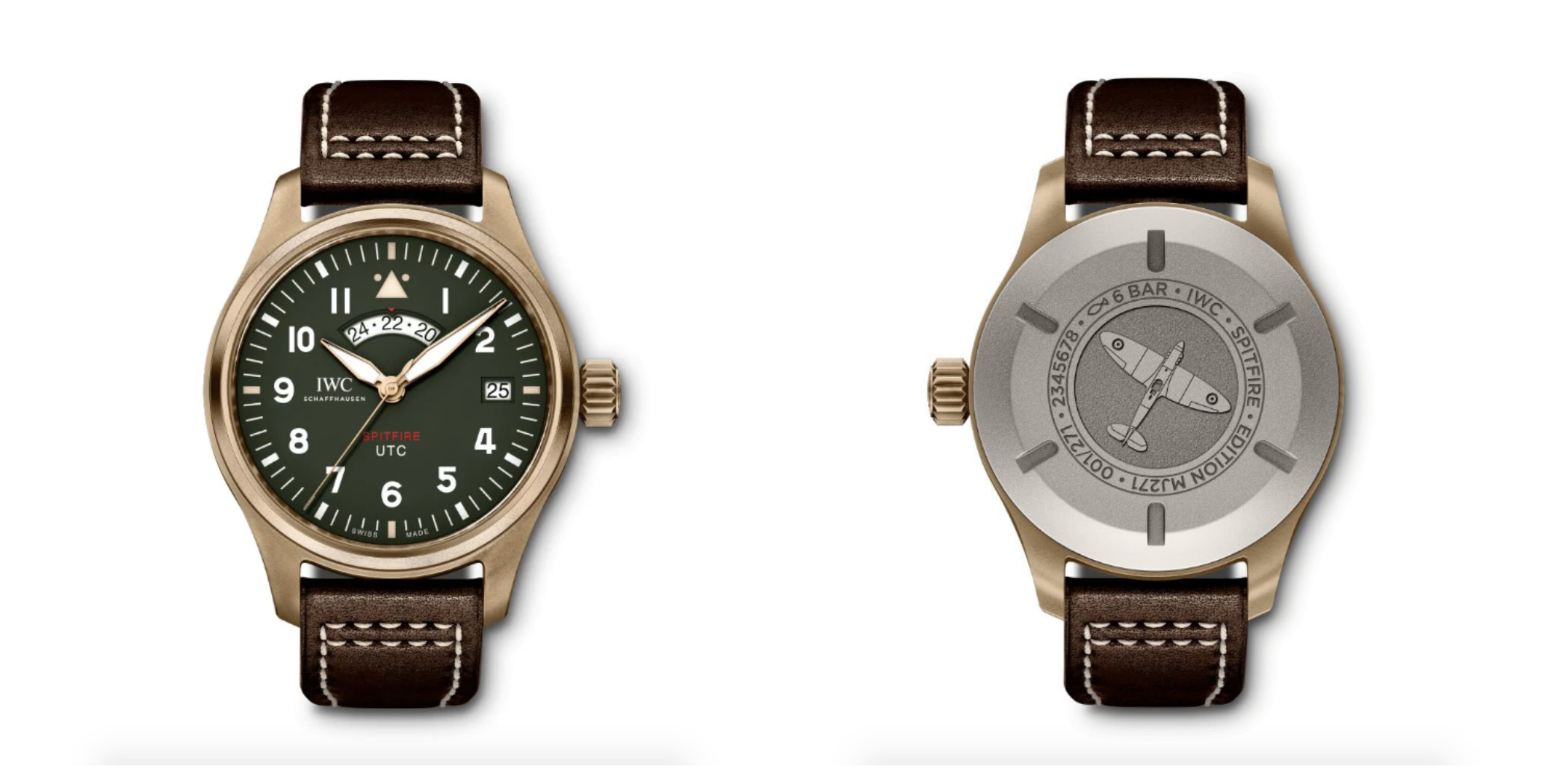 What makes the IWC Pilot’s Watch UTC Spitfire Edition “MJ271” so special? — it’s limited to only 271 units worldwide. While that number may seem odd, it is because MJ271 was the original call sign of the “Silver Spitfire” during its time of service. As for the “Silver Spitfire – The Longest Flight” project, this will be the first airplane to circumnavigate the entire globe in 2019. It also shares the same aesthetics as the IWC Pilot’s Watch Spitfire Perpetual Calendar with its bronze case, olive green dial, and brown calfskin strap. As the watch comes with its own UTC feature, it makes it very easy to set a second timezone. Another unique feature is the crown; a simple turn one way or the other causes the hour hand to jump forward or backward in our-hour steps. The date on the watch will also automatically change if it crosses the International Date Line. 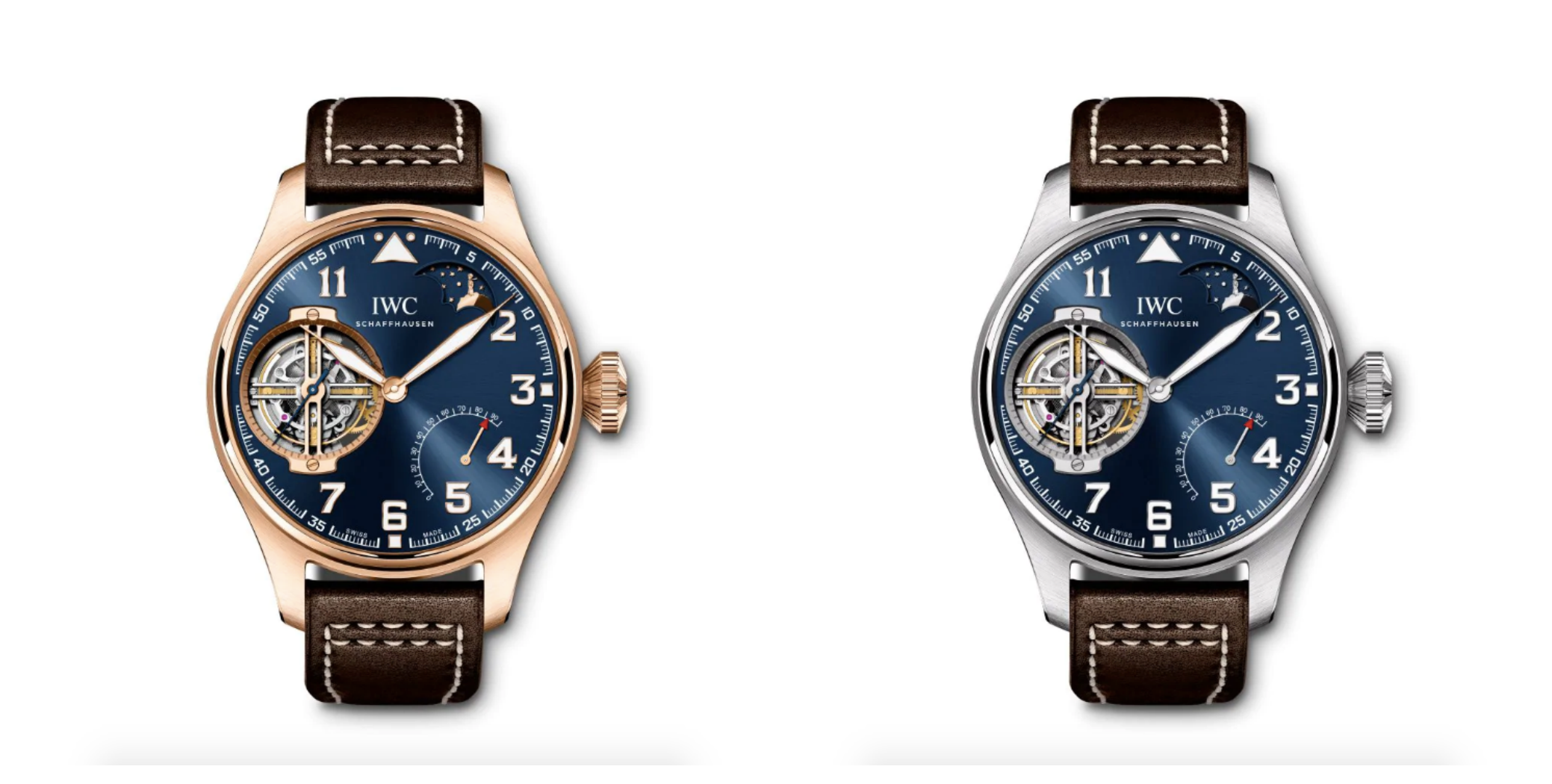 There are two variations for the IWC Big Pilot’s Watch Constant-Force Tourbillon Edition “Le Petit Prince” — either an 18ct hard gold or pure platinum case. This will be the first time IWC produces a case made from 18-carat hard gold, which is a special variant of 5N gold. This sophisticated and complex process alters the alloy’s microstructure, allowing it to be significantly harder and more resistant to wear and tear. Aside from the type of case, both watches carry the same infrastructure and features, which include a moon phase as well as a tourbillon with a constant-force mechanism. As far as exclusivity for the watch goes, both the 18ct hard gold as well as the titanium case are limited to just ten units each. 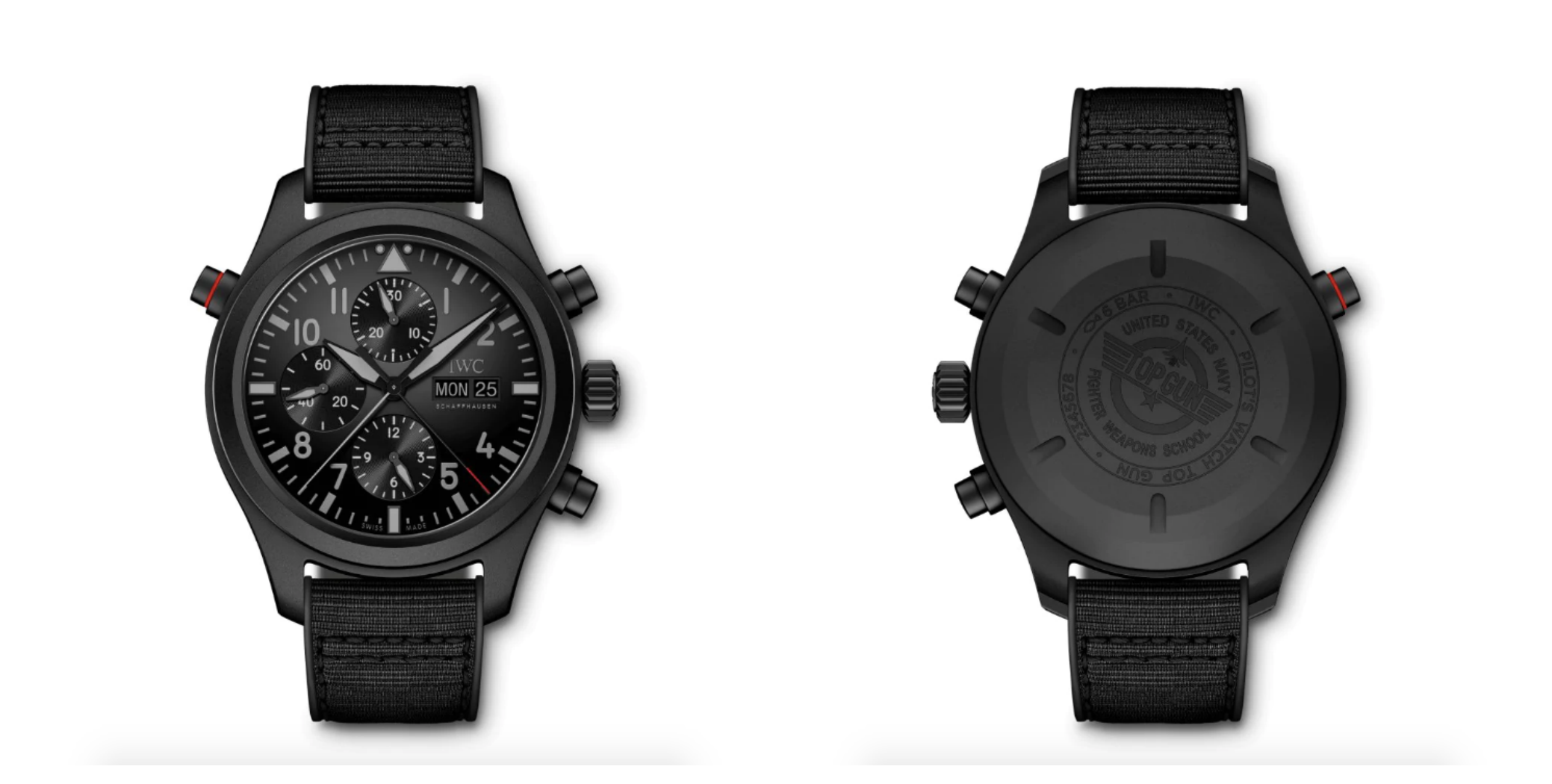 IWC brings its all-black expertise into the IWC Pilot’s Watch Double Chronograph To Gun Ceratanium, showering its dial, case, and strap in jet black. What makes this watch interesting is that it’s coated in ceratanium, which is developed by IWC and combines the advantages of ceramic and titanium in a single material. As it is a titanium alloy, this allow the watch to be lightweight and rigid as titanium itself while still being hard, wear-free, and scratch-resistant because of the ceramic element. All of the case components as well as push-buttons and pin buckles are also made out of ceratanium. As for its double chronograph feature, it’s an integrated split-seconds function that allows the watch to time two separate actions simultaneously.

IWC IWC Schaffhausen Aviation Watches IWC Top Gun iwc pilot watches iwc spitfire
Wi-Liam Teh
Senior Writer
Wi-Liam is a geek at heart with a penchant for tattoos. Never without a drink in hand (preferably whisky, gin, or Guinness), he is also a writer by day and a keyboard warrior by night. On his day off, he masquerades as a streetwear and sneakerhead enthusiast while his bank account says otherwise.
Tech Cars Watches Entertainment Food Drinks