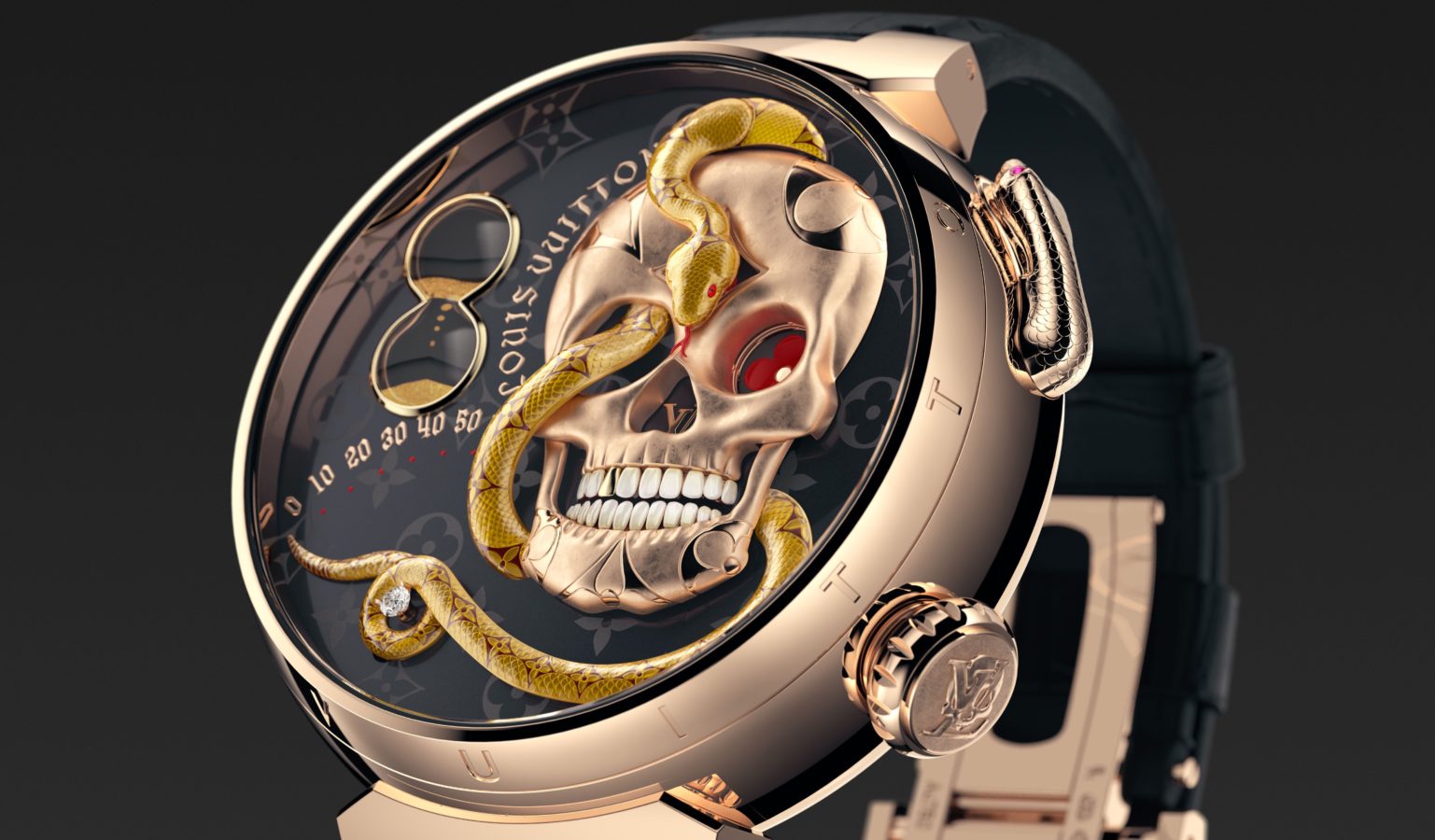 Dubbed the “Oscars of Watchmaking”, the Grand Prix d’Horlogerie de Genève (GPHG) that celebrates the best in horology saw a number of winners in numerous categories, two of which were snagged by Louis Vuitton.

The first is the Audacity Prize — a prize that rewards the best competing timepiece featuring a non-conformist, offbeat approach to watchmaking — and the winning model certainly lives up to the name. The Tambour Carpe Diem by Louis Vuitton is one of a kind, taking bold risks by being over-the-top yet still finely decorated in an artisanal manner.

The framework of the Tambour Carpe Diem is built with an automaton that tells the time on demand without hands. By pressing a push-piece, the dial’s miniature scenery comes to life on the wrist and the characters play their part — the snake and the skull indicate the time. Besides telling the time, Louis Vuitton has also provided additional watch complications to the timepiece: a jumping hour, a retrograde minute, a power reserve display and the mechanism of the automata.

“The prowess was to create a mechanical movement that is quite powerful to integrate and smoothly operate all these functions that had never been brought together before,” explains Michel Navas, Master Watchmaker at La Fabrique du Temps Louis Vuitton.

As the watch’s dial is unconventional, there is an art to revealing the time: simply push the reptile-shaped push-piece on the right of the case. The central snake’s head lifts up to reveal the hour aperture positioned on the forehead of the skull, while the rattlesnake tail swings toward the minutes, placed below the power reserve hourglass. While Monogram Flowers appear in place of an eye, the skull’s jaw emits a mocking laugh from which emerge the words, fittingly “Carpe Diem” (seizing the day), encouraging people to make the most of every passing day. This spectacle lasts for 16 seconds and is all the more remarkable as the reptile and skull move in a harmonious way.

On top of winning the Audacity Prize, Louis Vuitton also bagged a second prize at the GPHG: the Diver’s Watch Prize, awarded to the watch that’s linked to the world of diving and whose functions, materials and design are suited to the activity.

With high artisanal quality, multi-functionality, creative ingenuity and the freedom of expression, the winning Tambour Street Diver represents everything that Louis Vuitton symbolises. Carrying the legacy since the launch of Louis Vuitton’s very first timepiece back in 2002, the new Tambour Street Diver takes the brand into the realm of high-end sports watchmaking with one suited for all occasions.

Robust and edgy with an overall sporty outlook, the Tambour Street Diver brings together all the basics of a dive watch while still maintaining a vibrant, bright and colourful style. Function-wise, the watch comes with 100m of water-resistance and the generous coatings of Super-LumiNova on its dial elements and inner rotating bezel, which keeps the top of the case clean. The diving scale itself is placed below the sapphire crystal on the turning flange, drawing the wearer’s eye to the centre of the dial and creating a feeling of depth and intensity.

The Tambour Street Diver may have won the Diver’s Watch Prize at the GPHG, but its design is made for more than just its function — whether you’re in public squares or  gardens, underwater or from great heights, the watch is able to morph to suit any style.

Find out more about Louis Vuitton’s winning timepieces on the official website.