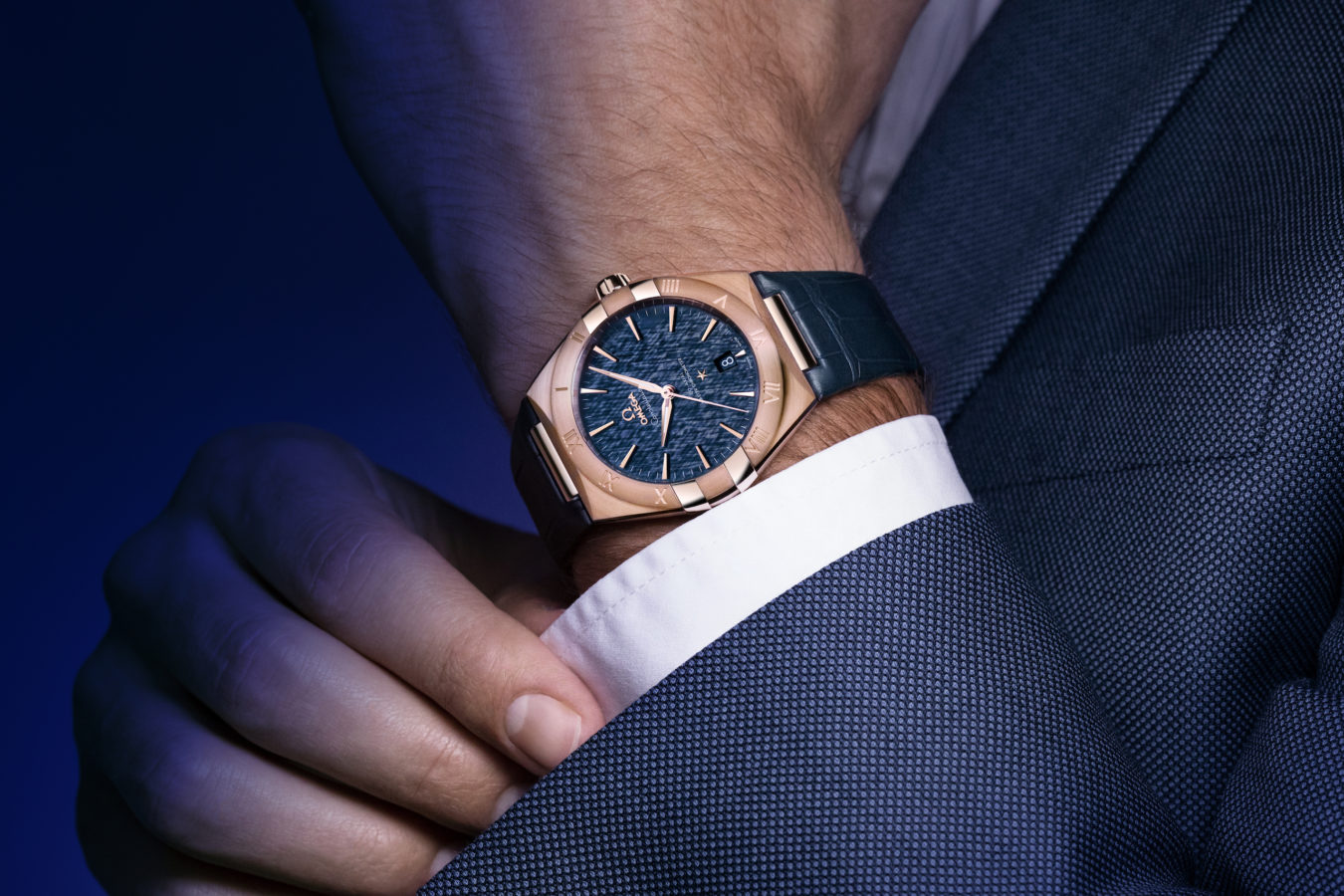 Whilst the Speedmaster Professional may be the watch nerd’s OMEGA of choice, it is the Constellation that is the certified MVP of the brand. (Parent company Swatch Group don’t release an individualised breakdown of sales, but it’s widely reported that the Constellation is OMEGA’s hardest-hitting watch in the Far East — particularly in China.) Launched in 1952 — half a decade before the arrival of the first Speedmasters — the original Constellation was a chronometrically certified dress watch; known for arched lugs, a dressy aesthetic and star-adorned dial. Two years ago, the ladies’ side of the collection was revamped with a series of ‘Manhattan’ timepieces; and now, OMEGA is turning its attention on potential male buyers.

The new Constellation Gents’ lineup consists of 26 models in two sizes (36mm and 39mm). Additionally, all of the watches are outfitted with either a calibre 8800 or 8801 — two METAS-certified movements that utilise the brand’s Co-Axial escapement and (depending on which model you’re looking at) proprietary alloys like Sedna gold.

The sheer scope of the Constellation revamp means there’s no shortage of new models to choose from. As you’d expect, OMEGA casts a very wide net when it comes to style and pricing. Beyond the obvious differences in size, the brand has made a solid effort to put together a release that includes something for every possible kind of watch buyer. There are the obligatory steel references, various two-tone executions, tailoring-ready models on straps, four shades of ‘silk-embossed’ dial (similar to Rolex’s ‘linen’ finish); and even a couple of diamond-set options. For our money, the ‘silk-embossed’ models are the most interesting — not least because they feed into collectors’ appetites for visually interesting dials.

Speaking broadly, the new Constellations adhere to the same set of aesthetic codes OMEGA has employed since the 80s, albeit tweaked and reinterpreted (with the aid of modern finishing) for a much sleeker-wearing timepiece. Whereas the finishing on vintage models used to be uniform, the new Constellations feature a case that incorporates multiple brushed, polished and bevelled finishes. The signature ‘bezel claws’ are of course still present — funnily enough, OMEGA only introduced this somewhat modern detail in 1982 — and are now contrasted with the predominantly brushed surfaces of the case. Additionally, much of the dial furniture has been revamped: handsets have been elongated into a sharp Alpha style (ostensibly inspired by New York’s Freedom Tower) and hour markers are conical.

In lockstep with the current market, 13 of the new gents’ models come equipped on bracelets. Insofar as ergonomics are concerned, OMEGA has designed these with a ‘comfort release’ function, enabling wearers to adjust the bracelet’s length up to 2mm. There’s also a strong element of contemporary design: each link is connected by a mid-bar that is large and cylindrical, offsetting the former’s sharp facets.

Both types of calibre that power the Constellation are part of OMEGA’s recent rollout of METAS certified movements. In practical terms, this means that the cal. 8800 and 8801 are made to the brand’s highest operational standards: tested for precision in a variety of positions, temperatures, and environments. In addition to the integration of the co-axial escapement (which significantly improves the precision and reliability of the overall movement), the new models are equipped with all of the bells & whistles that OMEGA use in contemporary watchmaking. These include a silicon hairspring, free-sprung balance wheel, and plated rotor.

Style Watches Omega METAS OMEGA Constellation
You might also like ...
Style
The A. Lange & Söhne Odysseus is the brand’s first luxury sports watch
Style
Anthony Bourdain’s watch collection is now up for auction
Style
How to start your very own luxury watch collection
Style
Everything you need to know about buying your first Patek Philippe
Lifestyle Asia
Here's where you can read the latest news and stories from Lifestyle Asia, curated from all of our editions in Hong Kong, Singapore, Kuala Lumpur, Bangkok, India and Paris.
Luxury