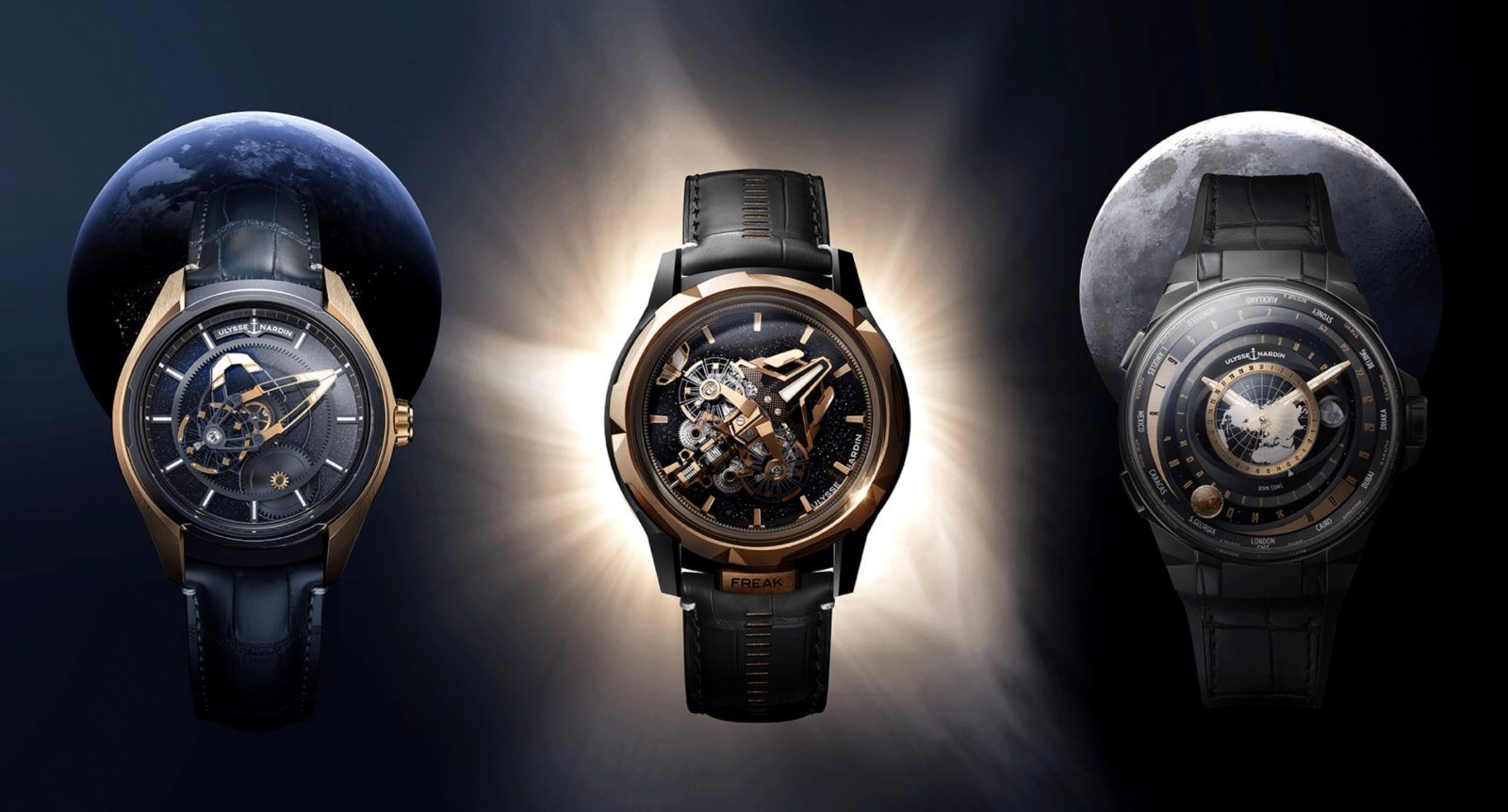 The lowdown on Ulysse Nardin’s novelties from Watches and Wonders 2022.

Ulysse Nardin’s historical Freak collection – first launched in 2001, and which is widely regarded as a milestone in the history of the Swiss watchmaker – has reached a new orbit with the Freak S. Equipped with twin balance wheels – but mounted on a central carousel (de rigueur for all Freak watches) – the latest iteration of this timepiece is the evolution of over two decades of constant innovation.

“The Freak is a watch whose revolutionary soul is regularly fired up by new technical challenges. Like the heroes of Homer’s Odyssey who visited many unknown lands, we at Ulysse Nardin continue to explore all possible roads offered by science to ensure constant improvement in the precision and functionality of our time-keeping instruments,” says Patrick Pruniaux, CEO of Ulysse Nardin.

Ulysse Nardin’s technical teams have succeeded spectacularly in pushing the three-dimensional effect to the limit. The Freak S’ inclined double oscillator is a premiere, the prime signature of the new UN-251 Manufacture movement. Positioned on distinct planes as if on two launching pads, the two XXL silicium balance-wheels are linked by a differential, which draws the average of their rates. Assembled on two plans inclined at 20 degrees from one another, the two extra- large balance-wheels with inertia-blocks are linked by a bridge in rose gold in the form of a rocket’s wing. In a rhythmic tango, they give the impression of two turboprops beating time at a frequency of 2.5 Hz – reinforcing the timepiece’s 3D effect and space inspiration.

Besides giving the watch a remarkable spaceship look, the inclined double oscillator and its differential constitute a technological marvel, enabling improved regulation of the movement’s running rate. The most common application of a differential is in the transmission of an automobile. A differential is required in a vehicle when it makes a turn, as it allows the drive wheels to turn at different speeds: the wheels located on the outside of the turning curve turn faster than the inside wheels. Here, it performs an indispensable function: drawing the average of two rates and evenly distributing the barrel’s energy to the two regulating organs, so that its amplitude remains stable.

The two oscillators of the Freak S never oscillate at the same speed and are therefore mutually compensated thanks to this mechanism, which is as aesthetic as it is useful.

The micromechanical machinery featured beneath the crystal of the Freak S is nothing other than a carousel with an autonomy of 72 hours, with no hands, dial, or crown. The Freak indicates the time thanks to the rotation of its movement. Two bridges rotate around the centre. They indicate the hours and minutes, respectively. An arrow covered with Super-LumiNova shows the hour while the nose cone of the rocket, which bears the balance-wheels and the escapement, indicates the minutes. In the course of its 60 minute revolution, the movement pivots on its central axis inside a hi-tech case with a sapphire crystal.

Whereas in traditional tourbillons, the balance wheel makes one rotation per minute within a cage, in the Freak, it’s the whole movement – including its regulating organ – that makes a complete turn on itself in one hour. The Freak S’ time is set by rotating the bezel in a clockwise or counterclockwise direction.

The glittering effect of the aventurine, that decorates the movement, gives the Freak S the sparkle of a starry night. Legend surrounding aventurine recounts that in the 13th century, on the island of Murano in Venice, home to the famous glass-makers, a craftsman accidentally, or “par aventure”, let some copper filings fall into a pot of molten glass, so creating aventurine glass, or aventurina in Italian, meaning “by chance”.

The Freak S comes in a limited edition of 75 pieces, of which just 40 will go into production in 2022. Every watch is fitted with an alligator strap, as well as a self-folding clasp system in titanium with black DLC. Thanks to a new patented triple-folding system that operates in synchronized fashion (SYNC), the clasp opens with a single click.

Another new iteration of the Freak collection is the X Aventurine, first launched in 2019. It became the first Freak to be equipped with a winding crown on its right-hand side. The latest version is equipped with a regulation organ – balance wheel, anchor, and escapement wheel –made of silicium. While emphasizing a sleek design, this 43mm watch perfectly lives up to the pedigree of its Freak predecessors.

The movement is fitted with a carousel, turning once on itself every hour to indicate the time. It serves as a minute hand circling above the aventurine plate decorating the movement. Inside and clearly visible, a super-light and extra-large silicium balance wheel with nickel inertia-blocks oscillates at 3Hz. Its blue PVD titanium and SN rose gold case has a distinctive look with gently rounded curves. Limited to 99 pieces, the Freak X Aventurine is available on a blue alligator strap with light grey “points de bride” stitching and a blue PVD titanium and SN rose gold folding clasp.

Timepieces Ulysse Nardin Watches and Wonders 2022
Lifestyle Asia
Here's where you can read the latest news and stories from Lifestyle Asia and our sister titles PrestigeOnline and Augustman, curated from all of our editions in Hong Kong, Singapore, Kuala Lumpur, Bangkok and India.
Luxury
Sign up for our newsletters to have the latest stories delivered straight to your inbox every week.

New watches you can expect in June: Hublot, Chanel, Louis Vuitton and more

All the major new watches you can expect this month

Limited editions and beyond: 7 of the biggest watch collaborations of all time