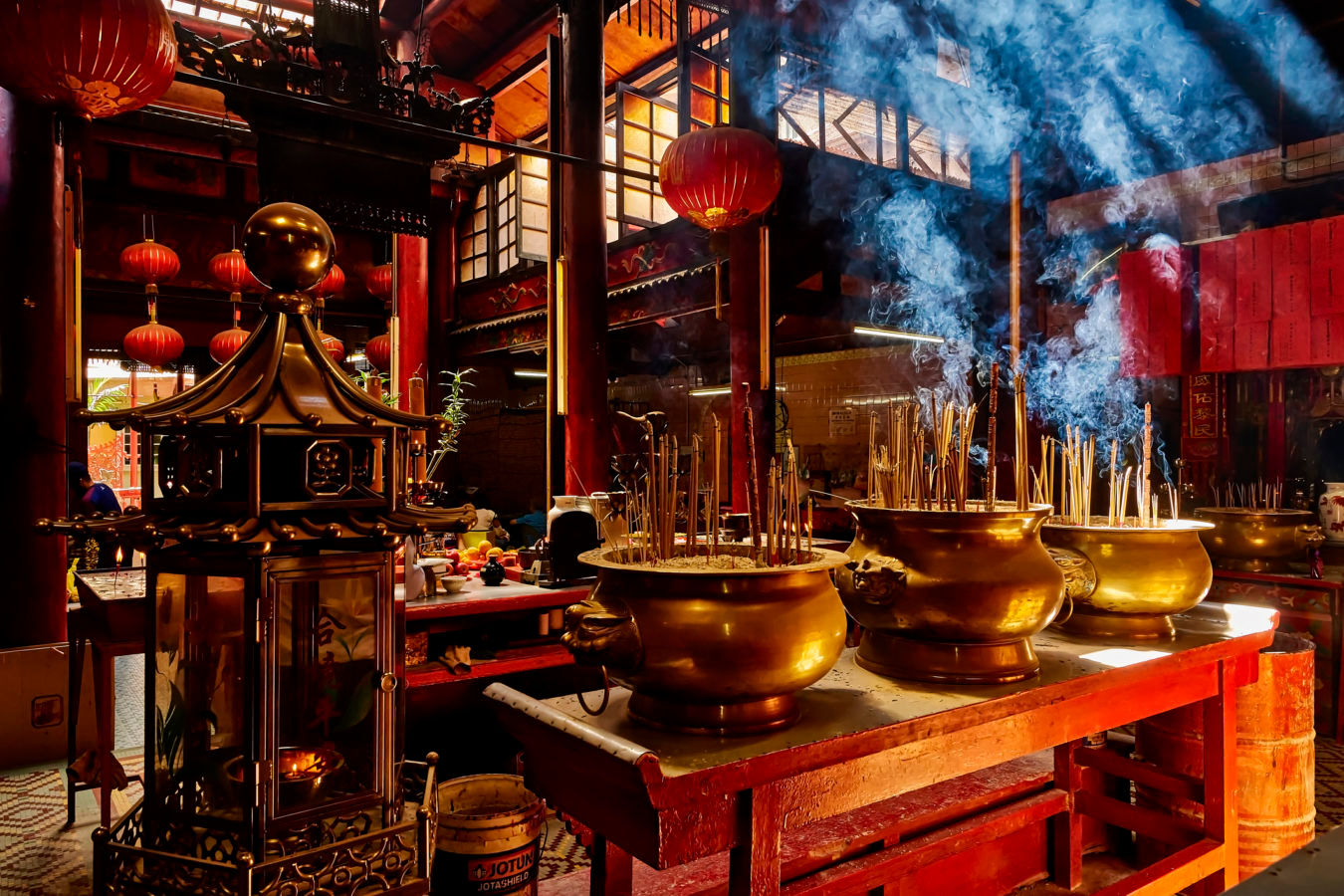 A metropolis constituted by people of various faiths, KL is naturally dotted with innumerous houses of worship, including Chinese temples.

A spiritual institution interspersing faith, philosophy and culture, a Chinese temple is more than a place to worship the Gods and one’s ancestors, it is also an architectural marvel. Broadly speaking, Chinese temples can be categorised into miào (a temple devoted to Gods of the Chinese pantheon), cítáng (an ancestral temple), dàoguàn (a Taoist temple), sìyuàn (a Chinese Buddhist temple), kŏngmiào (a Confucius temple) – and not to mention, household shrines honouring the God of Prosperity and God of Kitchen.

While these temples typically serve a single purpose, such as those dedicated wholly to a single faith or a particular lineage, more often than not, Chinese temples in Malaysia are constructed in such a unique way that it reflects the confluence of these aforementioned elements. Among its walls, you will discover various motifs nodding to Buddhism, Taoism, Confucianism, and deities of the Chinese pantheon and folklores. A single temple may profess more than one affiliation.

Then there are the cultural roots of the Chinese reflected throughout the monastery. Creatures embodying luck and vigour, such as dragons and lions, are recreated in the shape of ornaments. They may be placed at the entrance or the roof to stand guard over the property. Everywhere you look, each detail is deliberately pieced together to poetic effects. Seeing is believing – drop by any of the temples below for further enlightenment.

5 must-visit Chinese temples in Petaling Street and KLCC, KL in 2022:

The most impressive in terms of scale – it is one of the largest in Southeast Asia – thanks to a soaring six tiers and ample space, the temple dedicated to the Chinese sea goddess Mazu was built in 1981 and the construction was completed in 1987. The temple features elements of Buddhism, Taoism and Confucianism, arrayed with ornate pillars, finials and archways.

It opens from 8am till 8pm daily.

Built between 1897 and 1906, the ancestral hall is an elaborate structure featuring terracotta friezes and intricate roofs, while the interiors are decorated with mythical creatures. Beyond the beautiful courtyard, extravagant shrines and magnificent pavilions, the institution also functions as a community centre for the clan whose surnames stand for Chan, Chen, Tan, Chin, Tang or other Romanticised spellings of the same Chinese character.

The edifice inherits the design of the Chen Clan Ancestral Hall located in Guangzhou, China, albeit on a smaller scale. Various unforeseen obstacles cropped up during its construction, causing a delay in its completion.

Completed in 1887, the Taoist temple fronts the historical Jalan Tun HS Lee is also one of the oldest houses of worship in Malaysia. Imposing thanks to its crimson façade, the temple is dedicated to Guan Di, God of War and Literature. Ardent devotees believe the weapons – a spear and a sword – borne by the deity possess special blessing power. Visitors will instantly recognise the lions sitting on the stone pedestals guarding the temple, as well as the many pillars engirdled by dragons.

Located on Lebuh Pudu, the Taoist temple is the oldest of its kind in KL. Its establishment was carried out at the behest of Yap Ah Loy, a pivotal figure in the prosperity of KL from an unassuming village to a prospering city, in honour of the deities – Sin Sze Ya and Si Sze Ya – who he believed had help provided him with guidance during the Selangor Civil War. The tutelaries were based on Sheng Meng Li (Kapitan of Sungai Ujong) and Chung Lai (Yap’s lieutenant). The site on which the temple stands was founded in 1864, while the completion of the temple dates back to 1883.

It opens from 7am till 2pm daily.

A brief stroll from the renowned Petronas Twin Towers takes visitors to a Buddhist temple where many office workers drop by during lunch hours for the vegetarian food hall operated by guardians of the temple. A calming oasis surrounded by skyscrapers, the temple is festooned with numerous statuettes including the Laughing Buddha and Guan Yin. The site housed a temple as far back as 1880, according to FMT. It is, however, the extensive renovation undertaken in the 2000s that endowed the temple with modern monasterial looks, presenting an authentic representation of a Chinese Buddhist temple.

It is closed to visitors as of writing.

All images by respective Chinese temples in KL, unless stated otherwise

Travel Chinese New Year temple
Justin Ng
Digital Content Director, Kuala Lumpur
Often think of myself as a journalist and so I delve deeper into a range of topics. Talk to me about current affairs, watches, travel, drinks, new experiences and more importantly, the business, economics and dynamics behind it.
Sign up for our newsletters to have the latest stories delivered straight to your inbox every week.