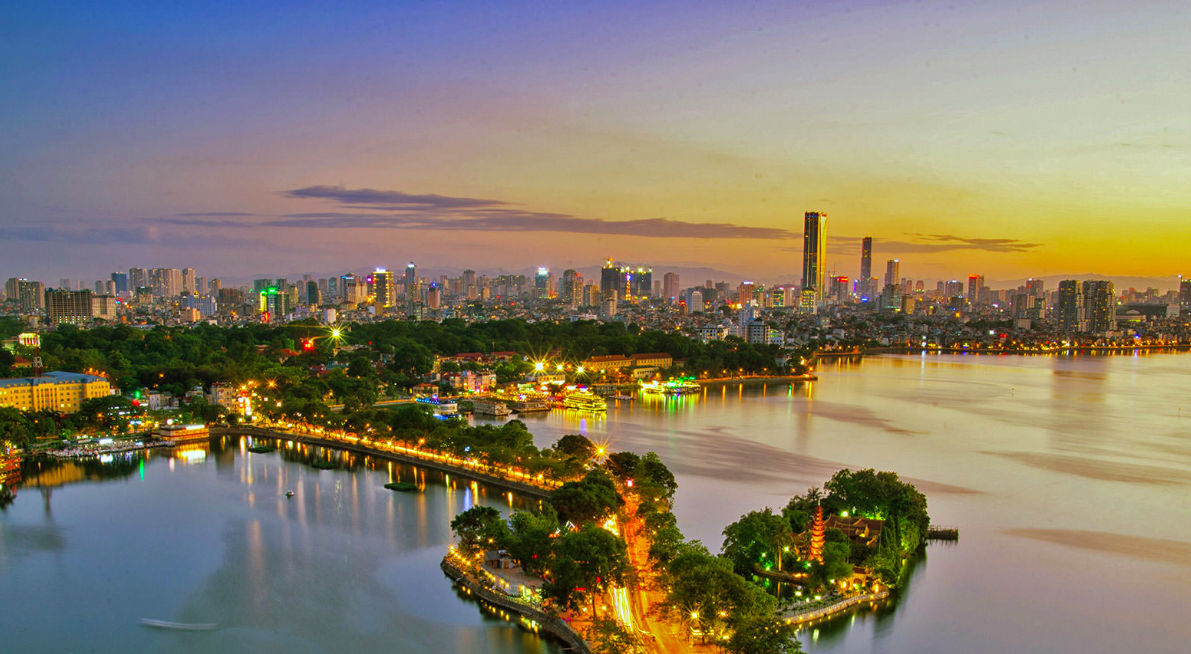 5 swanky hotels for a luxurious stay in Hanoi

Traveling to cities in Southeast Asia may give you a sense of déjà vu after a while. The enervating heat, traffic jams, and tourist traps are constant factors across the region, after all. But that’s all going to change when you visit Hanoi.

Teeming with picturesque temples, exotic pagodas, and opulent theatres, the Vietnamese capital will surely charm you with its centuries-old architecture that reveal periods of French and Chinese occupation. These cultural influences, along with the city’s rich heritage, has also produced a wealth of culinary delights — making every meal truly an adventure in Hanoi.

While finding your way around the second largest city in Vietnam may prove to be a challenge, shopping for silk and seeing the city’s thriving art scene makes all the trouble worth it. But if you really find its hustle and bustle stressful, you can immediately retreat to strategically placed hotels just minutes away from Hanoi Opera House, Ngoc Son Temple, and Thang Long Water Puppet Theatre.

Boasting gleaming interiors, stylish guest rooms, and personalised service, Hanoi never runs short of elegant suites to spoil travellers with. And at extremely affordable rates, any of these luxury hotels are bound to suit your style and preference. 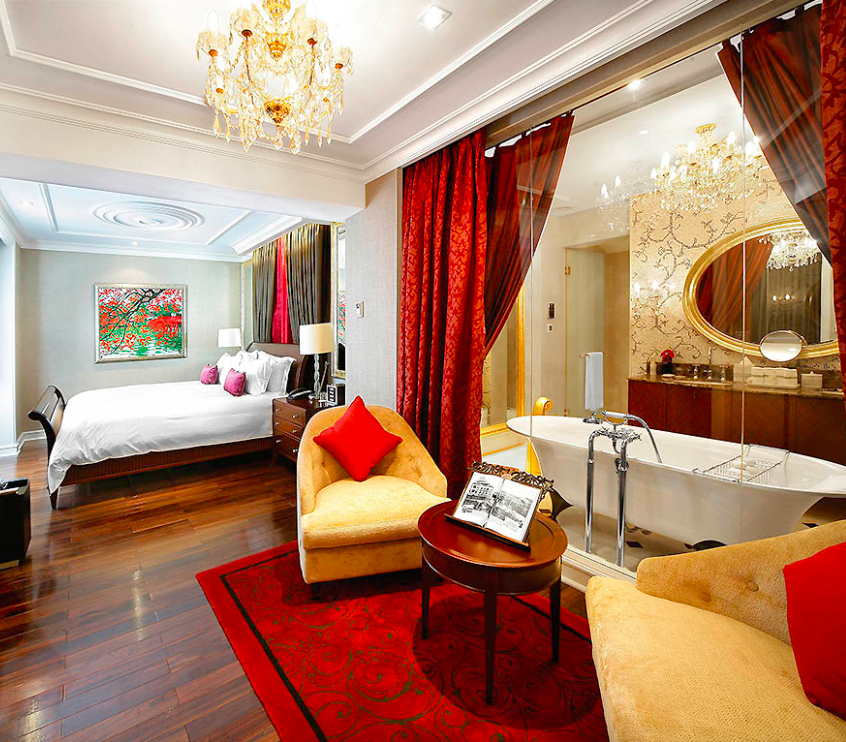 Opened since 1901, the most prestigious address in Hanoi welcomed Hollywood legend Charlie Chaplin, actress Jane Fonda and former French president Jacques Chirac. Exuding modern European glamour, the 363-suite property has many facilities such as a business centre, small outdoor swimming pool, a fitness centre and even a hair salon, so you won’t feel like you’re away from home. The best part is, you don’t really need to go too far to savour authentic Vietnamese food. You can actually enjoy luxed up versions of these Vietnamese favourites at one of the hotel’s dining venues called Spices Garden. Also located within the hotel, Le Beaulieu restaurant is considered as one of the finest French brasseries in town. Conveniently located between Hanoi’s Old quarter just 2.7 kilometres from the Ho Chi Minh Mausoleum, this contemporary hotel represents a new standard of international five-star hotels for its modern, high-rise glass-palace concept. It sits on the upper floors of 65-storey Lotte Centre and features floor-to-ceiling windows. Offering panoramic views of Hanoi, this posh residence gets more interesting at night. Climb up to Pharaoh’s Bar & Upper for some hand-crafted cocktails and take in the best views of Hanoi’s cityscape. 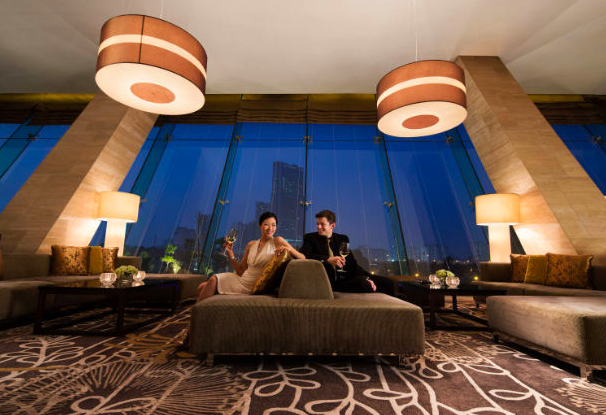 If the JW Marriott Hotel Hanoi’s futuristic glass architecture doesn’t impress you, wait until you get inside its suites. It has floor-to-ceiling windows, allowing you to enjoy the breathtaking view of Hoàn Kiếm Lake. It may be located away from the town (just a kilometre from the Keangnam Hanoi Landmark Tower), but this upscale accommodation totally makes up for it with 24/7 room service, a spa, and a fitness centre. After a nice dip in its indoor pool, enjoy the rest of your night at the Cool Cats Jazz Club, which is known for its music performances. 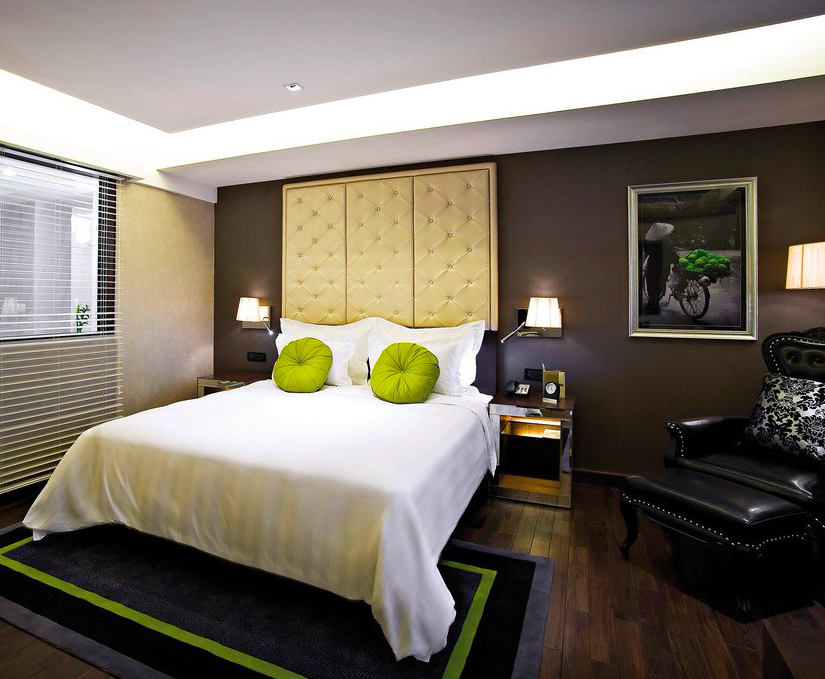 Set in the bustling Hoàn Kiếm District, this chic boutique-styled hotel offers beautiful and serene views of Hanoi’s French Quarter. With spacious living rooms for its suites, it has 154 well-appointed rooms that combine elegant French colonial architecture with modern, luxury facilities. The hotel is located right in the centre of Hanoi, so you aren’t too far from the shopping belts and night markets. 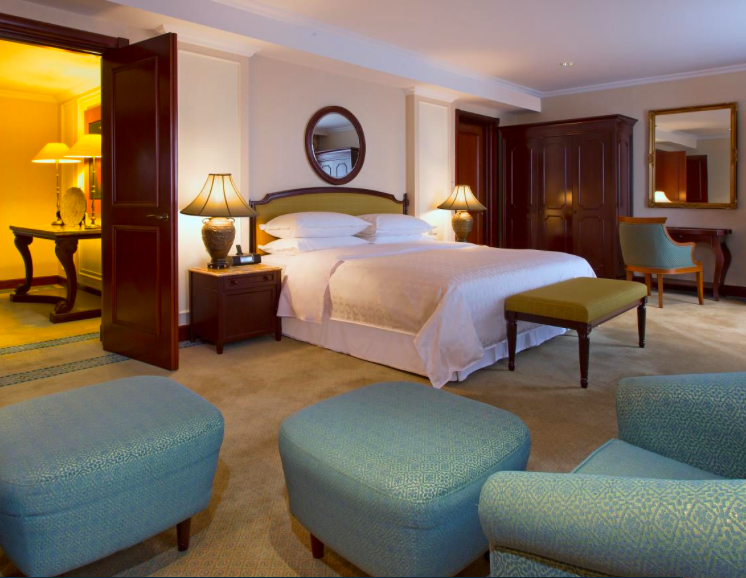 After spending hours shopping and sightseeing around Hanoi, you’d want to get some much-needed rest in your hotel for a while. That wouldn’t be such a bad idea, especially if you’re staying at Sheraton Hanoi Hotel. The 299-room hotel has an imposing entrance with lush gardens, sweeping lawns and tranquil courtyards that seem to be lifted out straight from a Wes Anderson movie. With picturesque views of the lake and river, and the friendliest staff to boot, it’s very easy to hole up in one of its spacious rooms.