Everyone from your grandmother to a tourist in Iceland knows about China House in Penang. It’s the go-to place to get cakes, coffee, and that perfect Instagram shot. But with that popularity comes a big crutch and it’s having too many people flood the cafe. Perhaps it’s time we reminded you that there are other cafes in Penang worth checking out too.

Yes, it’s true! There are other cafes in Penang where you can get equally astounding desserts, coffee, and tea, all in a gorgeous setting. Most of these cafes are also housed in heritage shop houses, making use of the classic long corridors and skylights. We’ve rounded up nine cafes for you to check out so you won’t run out of beverages to drink and desserts to indulge in. Here’s a bonus — there’s a boba cake place too. 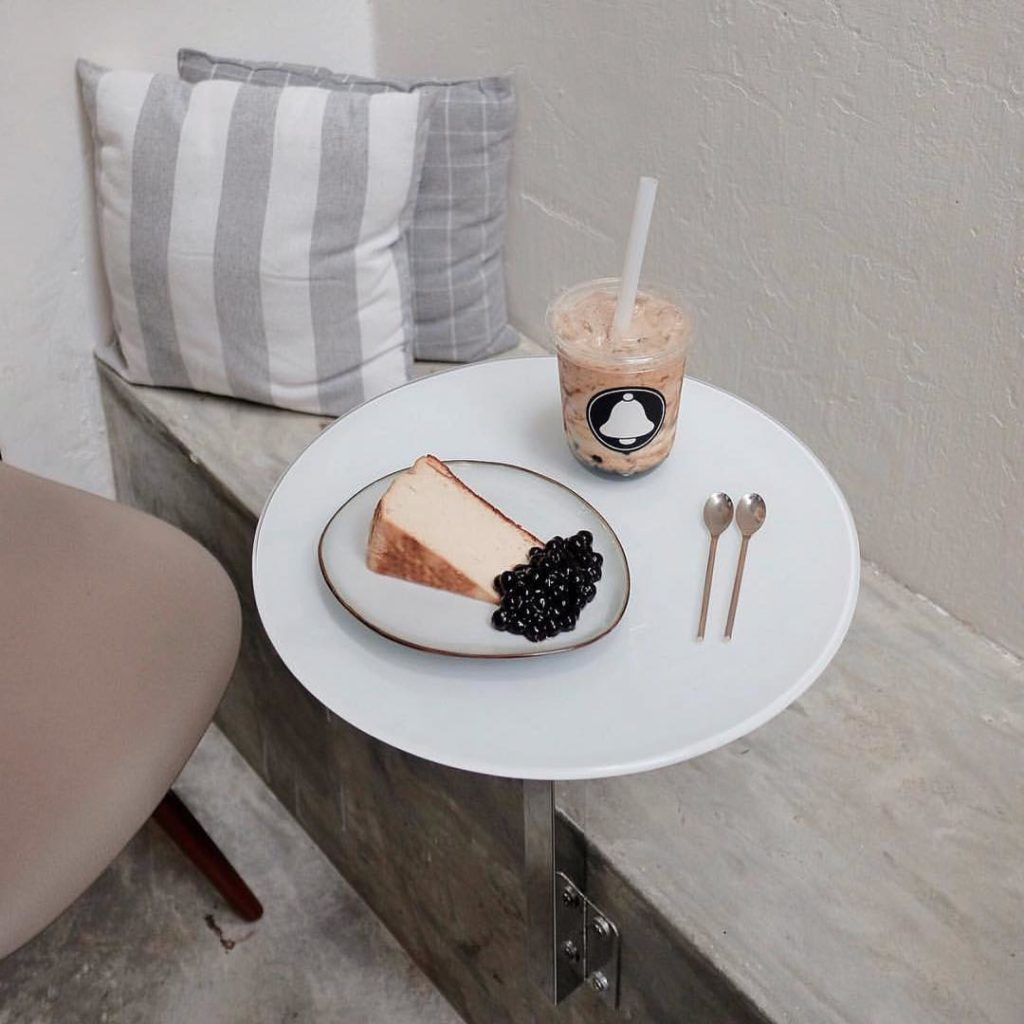 Still can’t get enough of bubble teas and its delicious pearls? Well then, you can extend this obsession to boba cakes that are available in Belle and Cream. If you’re a fan of the Basque style burnt cheesecakes too, you’ll be in for a treat, because Belle and Cream fuses both trends into one cake. That’s right, you can indulge in a boba burnt cheesecake. It helps that the cafe itself is totally gorgeous with its minimal, Kinfolk-esque style. 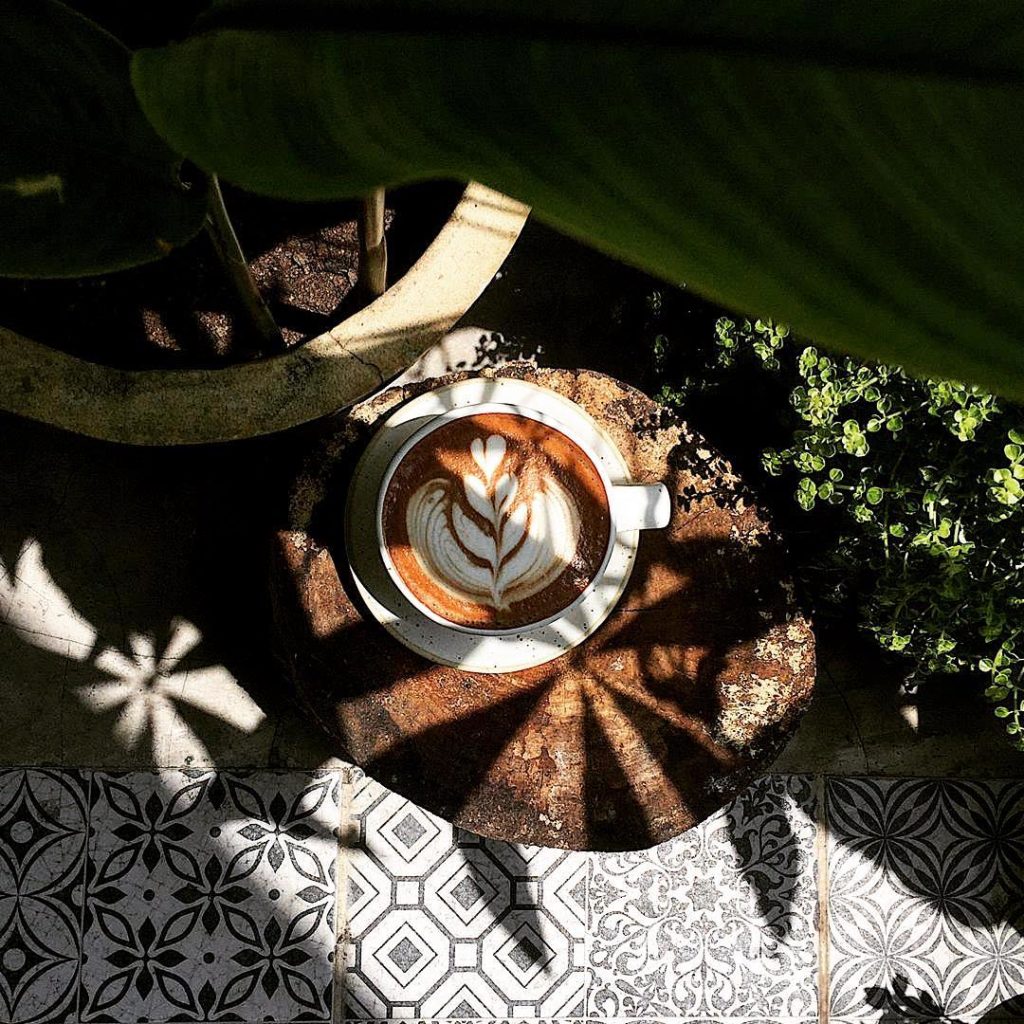 There’s specialty coffee, and then there’s experimental coffee like what Coffee Downstairs is doing. Think sous vide coffee and nitro black kombucha — if you’re adventurous enough to try. They’re also known for their amazing brownies, which allegedly have the right amount of crunch on the top and gooey middle. There’s only one way for you to find out, and it’s to try it out. 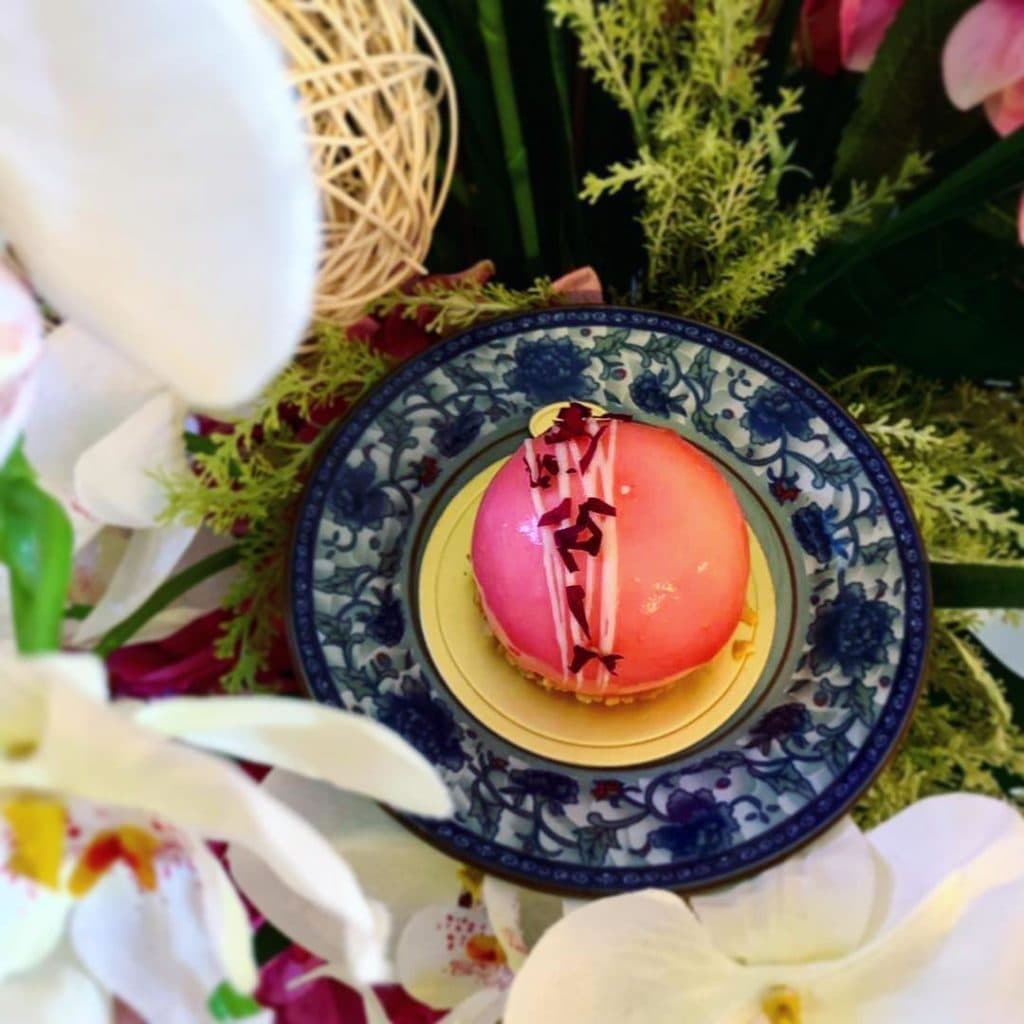 Not all good cafes in Penang are situated on the island itself, such as De’H Cafe & Bakery in Bukit Mertajam. This homey cafe utilises contrasting materials, such as bare cement floors and light rattan chairs. It’s very reminiscent of old kampung homes, which is what the “H” in the cafe’s name stands for. While you’re here, indulge in a wide variety of desserts available, including this seasonal sakura cake that is both good to look at and good to eat. 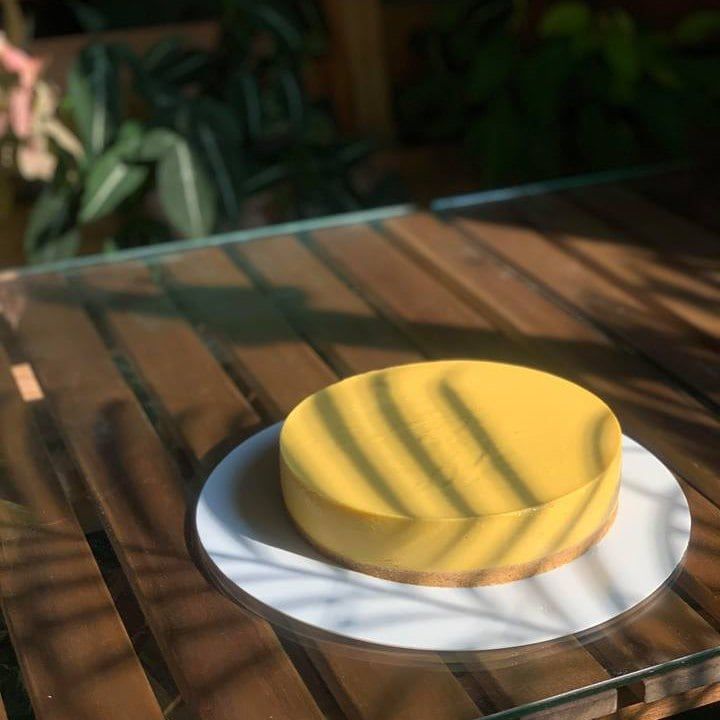 Joies Sourdough may have started out specialising in sourdough bread, but they’ve since extended its offerings to include other cakes, pastries, and more drinks. But first, you’ll have to hunt down this signless cafe. It’s located in the Pulau Tikus neighbourhood area and some effort is needed to find this cafe. But we promise the hard work will be worth it. The cafe has recently introduced several new offerings to its menu, including a healthy tofu cheesecake. 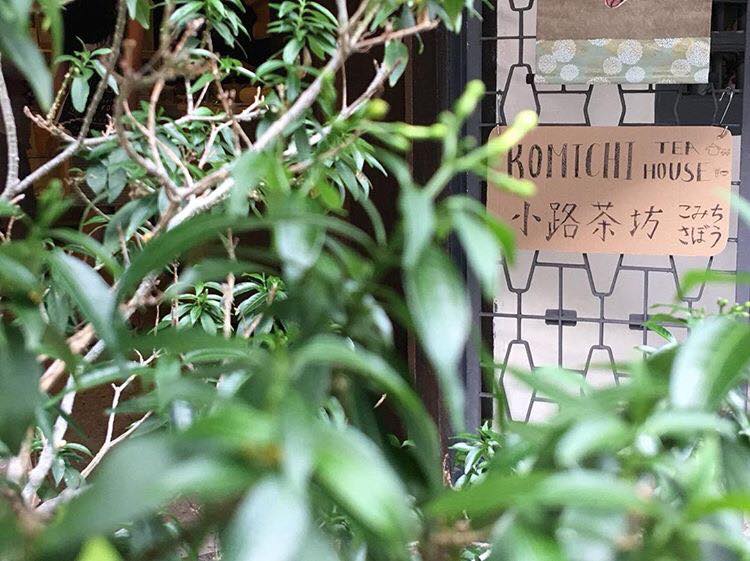 Fancy Japanese style desserts? Then you might want to make a trip to Komichi Tea House on Lorong Toh Aka. Matcha is the darling here, conjured into different types of creamy and delicious desserts, and even green tea to wash it all down with. But don’t worry, matcha desserts aren’t all that the cafe has. There’s also red bean dorayaki, black sesame swiss roll, daifuku, and more. We also love the lush greenery that surrounds the cafe, which just adds on to the zen mood we’ll already be in. 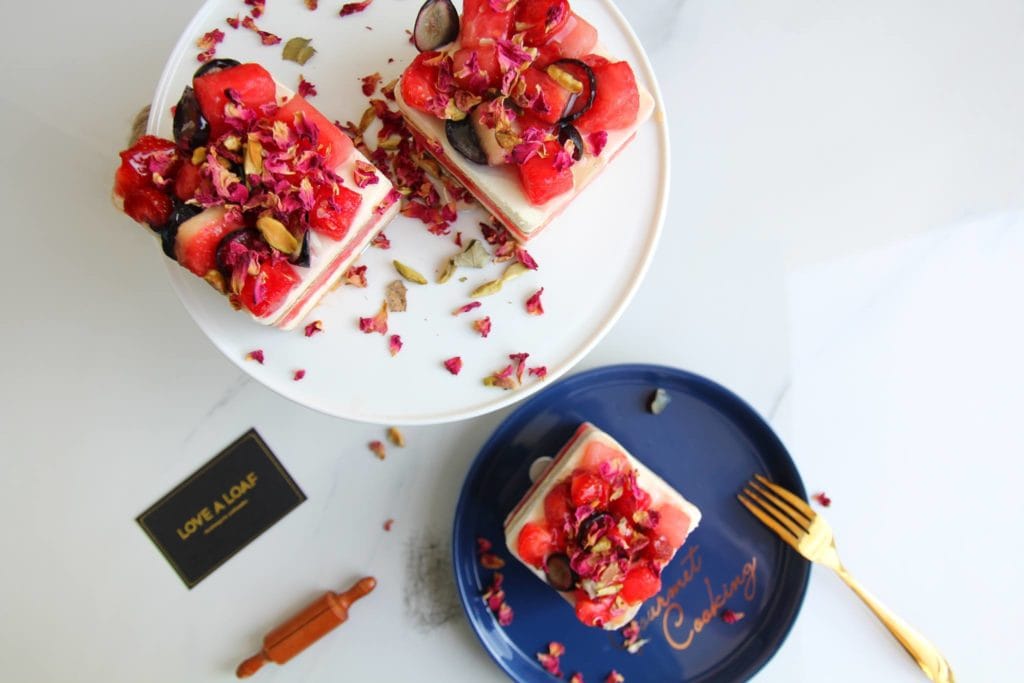 House plants are all the rage now, and Lavish Fusion Bakery is channelling that in their extremely photogenic indoor vertical plant wall. But what Lavish Fusion Bakery is truly known for are their extravagant cronut dessert dishes, flavoured souffle pancakes (there’s a durian one, naturally), and also dessert drinks. They also have their own version of the famed watermelon cake, for something a little more refreshing. 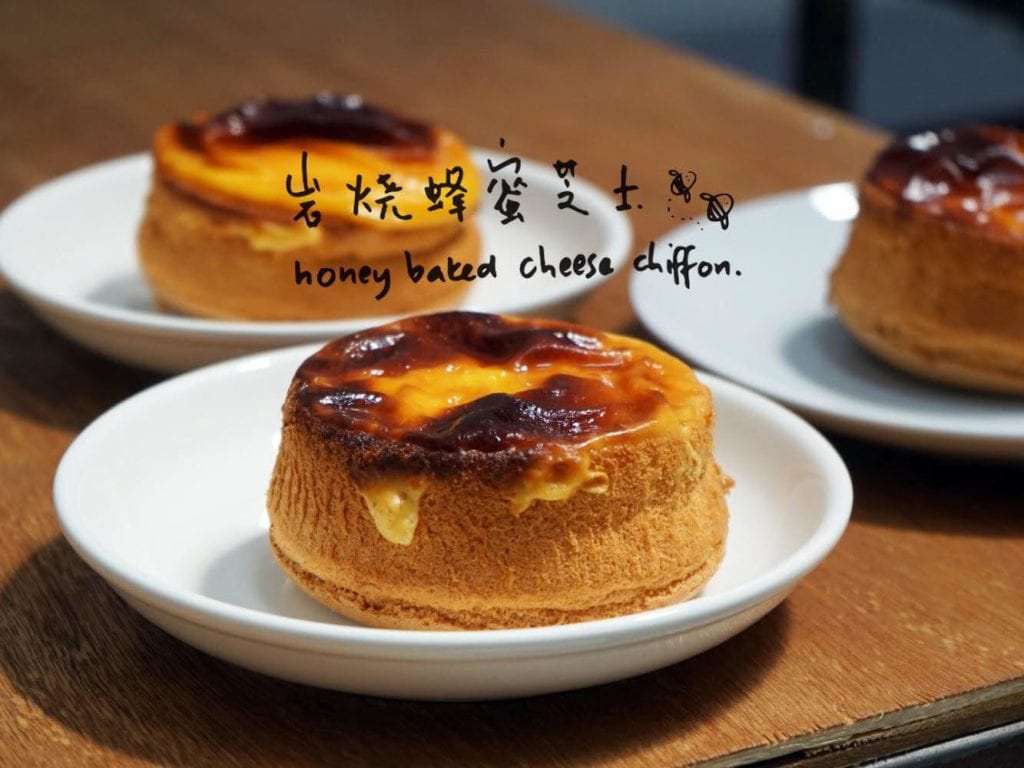 Le楽 first started out as a sandwich and coffee joint but of late the cafe has been experimenting with chiffon cakes that have made our mouths water. The cafe first debuted the Orange Chocolate Chiffon and Matcha Cream Cheese Chiffon, but now there is also a special, weekends-only flavour: a honey baked cheese chiffon cake that sounds absolutely delightful. 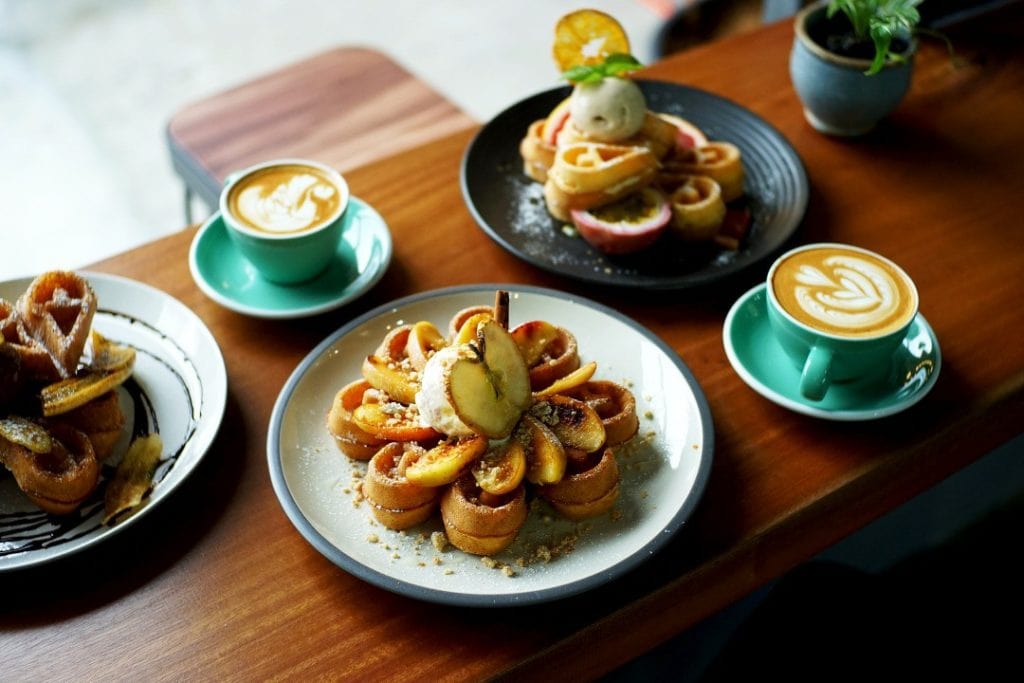 As a cafe, Norm ticks off all the requirements needed for that perfect cafe aesthetic: natural sunlight, lots of wood and glass elements in the interior, plants, and square subway tiles. The cafe recently reopened after some upgrading works, and it’s clear that its regular patrons love the new look. But of course, the aesthetics are nothing without a good menu to support it. Thankfully, Norm’s desserts and coffee are anything but normal. In fact, they’re pretty good. Get the decadent dessert waffles or a creamy classic tiramisu to go with your iced latte. 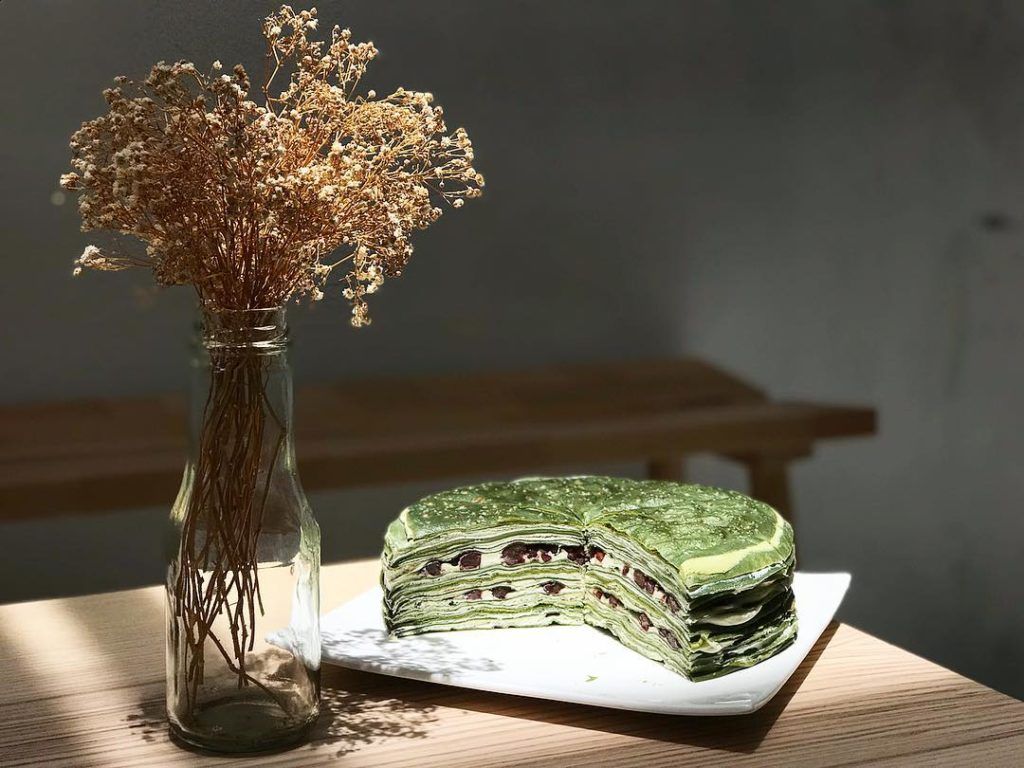 Coffee and waffles go hand in hand together — nobody knows this as well as Wells Cafe does. Originating from Hsinchu in Taiwan, Wells Cafe offers specialty coffee as well as Liège style waffles. For the uninitiated, Liège waffles are made using a thicker batter and have uneven edges which make for a crispier texture. Try the cherry blossom ice cream waffle for something seasonal. Otherwise, indulge in their many Mille crepe cakes and other desserts offerings.

penang cafes cafes in penang hipster cafe
PohNee Chin
Editor, Kuala Lumpur
Poh Nee is the editor and writes about travel and drinks. When she's not living out her holiday dreams via Google Earth and sipping on an Old Fashioned down at the local bars, you can find her snug at home bingeing on Netflix and mystery fiction.
Travel Drinks

ÖBB Nightjet To Santa Claus Express: 6 of the best sleeper trains in Europe