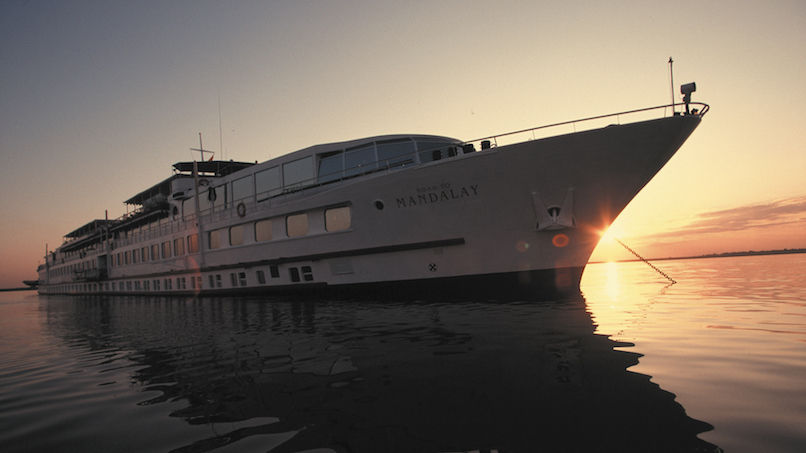 Leading luxury travel experience company Belmond has just announced a special anniversary cruise starting 1 October 2016, on board the Belmond Road to Mandalay cruise ship. As the company celebrates 20 years in Myanmar, the cruise will follow the inaugural route from Bagan to Mandalay in an exclusive five day, four night journey.

The festivities will begin with a welcoming cocktail reception and traditional dance ceremony on the beautiful riverbank of Myanmar, but adrenaline junkies have the option to start their trip with a hot air balloon ride over Bagan to see the ancient temples and pagodas that draws thousands of tourists every year. Guests can even take a ride in a traditional horse and cart to visit the gilded Buddha statues.

At one of the stops along the cruise — at Taung Be village in Bagan — guests are invited to visit a free clinic manned by the ship’s resident doctor, Dr Hla Tun. He’s also the leader of Belmond’s Myanmar Foundation, and treats patients who travel far and wide who come to see him. In gratitude to the riverside communities that have welcomed the cruise guests for the last 20 years, five percent of the ticket price of the anniversary cruise will be put towards the Belmond Myanmar Foundation, in support of the opening of a new hospital facility in Bagan.

Onboard the Belmond Road to Mandalay, guests are in for a visual treat with the breathtaking views of the golden stupas whilst taking a dip in the refreshing swimming pool, and indulging in local al fresco dining in the newly launched Bar & Grill situated on the ships observation deck. For the health-conscious and those looking to relax, there is a spa that offers traditional Burmese massage and even a sunrise yoga session led by a resident yogi.

The trip ends in Mandalay where the guests will get to experience the first ever Belmond Road to Mandalay Rally.  Here, guests will get to try traditional Burmese activities such as driving an ox and cart, rolling cheroots (cigar) and learning a Burmese dance. A gala anniversary dinner will be served under the dazzling stars.

Prices start from £3,069 per person, including two nights at Belmond Governor’s Residence in a deluxe garden room including breakfast, transfers to the hotel and onwards to Belmond Road to Mandalay.

Cruise Belmond Myanmar Mandalay Bagan Belmond road to Mandalay
Anita Bhagat
Sign up for our newsletters to have the latest stories delivered straight to your inbox every week.

Here’s how you can travel bougie on a budget, according to a celebrity travel agent

The ultimate guide to planning a dreamy holiday to Khao Kho, Thailand

From museums to walking tours: Here’s what you can do in London for free