What if we told you that you could escape from the city to a cooler climate area, less than three hours away from the KL city centre? That place exists, and it isn’t the upbeat hub that is Genting Highlands. No, we’re talking about Cameron Highlands.

For first time visitors, Cameron Highlands is located in the state of Pahang. This highland area is a popular tourist destination for locals wanting to escape not just the heat of the city, but also its frenetic pace. There’s something tranquil about driving uphill, slowly feeling the temperature dropping, and the air crisper.

Whether it’s your first time visiting Cameron Highlands or your hundredth, it’s always somewhat a pilgrimage to visit the Boh Tea Plantation, shop for fresh vegetables, and have a steamboat dinner. Below, we’ll show you a simple travel guide on where you can stay the night, eat some good food, and indulge in some activities. 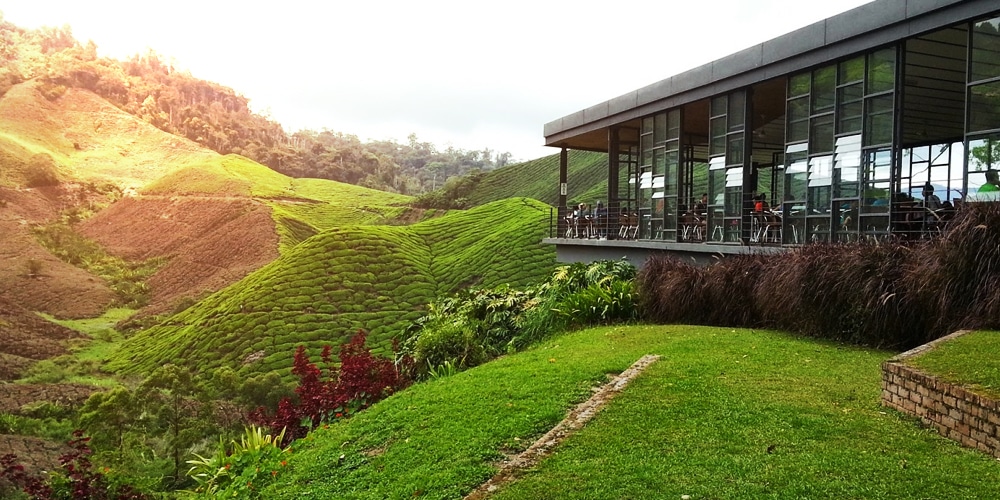 Visiting the tea plantation is a rite of passage for anyone heading to Cameron Highlands. The Boh Plantations was founded in 1929 by a British businessman – naturally. Thanks to the cooler climate on the highlands, the tea plants thrive well and is now a leading tea-growing region in Malaysia.

From the lookout point at the Boh Tea Plantation cafe, you can see vast rolling hills of green tea leaves, far as the eye can see. It really is quite a soothing sight. Take a walk through the neat rows of tea plants and take a picture or two. You can even get a guided educational tour through the processing plant to find out the process behind tea making. Once you’re done, head back to the cafe, order yourself some Boh tea and scones, and just bask in the cool air outdoors. There’s truth in the saying to “stop and smell the roses”. Except in this case, we want you to expand your horizon and smell the many flowers at the Cameron Lavender Garden. It’s one of the newer attractions in Cameron Highlands, but definitely among the prettiest. The highlight here is most definitely its namesake: a hill of lavender plants, alongside several rows of brightly-coloured flowers. It certainly doesn’t compare to the lavender fields of Banstead in the UK and Furano Lavender Fields in Hokkaido, but it’s something pretty to look at during your time here. Also in the garden is a small cafe selling flavoured soft serve ice cream including a lavender one, which makes for a nice snack and a pretty picture. 3
Interact with the creatures at the Butterfly Farm

Another one of the oldest attractions in Cameron Highlands is the Butterfly Farm. Purchase a ticket and head into a dreamlike wonderland, where a living collection of butterflies will dance around you in a tranquil garden. Needless to say, this attraction isn’t for people with entomophobia, as there are other insects in the garden too including beetles and several other exotic insects. If you love hiking, then you’ll definitely appreciate hiking in a cool setting without worrying about getting a heat stroke. The Mossy Forest boasts one of the highlands’ most popular hiking trails, and its setting is unlike the regular hiking trails you can find in the Klang Valley. The area is covered by a thick layer of moss – hence the name – which makes for a stunning magical environment. There are several trails ranging from easy to difficult, but generally, the hike isn’t too death-defying. 5
Stock up on fresh produce at the Kea Farm Market

No trip to Cameron Highlands is complete without shopping for fresh vegetables on your last day here. Thanks to the cool climate, the produce is extremely fresh and bountiful. Head over to the open market to shop to your heart’s content and practice your haggling skills here too. If vegetables aren’t your thing, the market also sells many fruits and fresh flowers too. 6
Stop by the Lata Iskandar Waterfall

On your way downhill from Cameron Highlands or uphill from Tapah, be sure to make a pit stop at the large Lata Iskandar Waterfall. It is literally located by the main road – you won’t miss it. You’ll find many local tourists stopping for a quick dip or a lunch picnic by the water. There are also several food trucks in the area, and even the indigenous people will set up shop nearby selling vegetables. Try the corn on the cob, they will be the sweetest ones you’ve ever eaten. Many of the older buildings in Cameron Highlands still retain its British colonial style, and The Lakehouse Cameron Highlands is one of them. This Tudor-style boutique hotel is set on sprawling grounds. It’s not unlike living in a British country house. Housing only 19 rooms, the hotel is charming, traditional, but not old fashioned. 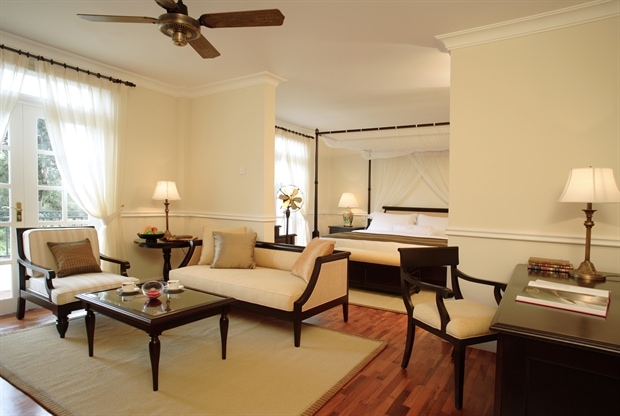 One of the most prominent hotels in the highlands has to be the Cameron Highlands Resort, a five-star luxury hotel set against the backdrop of rolling hills. Its architecture and interior dates back to its grand colonial heritage with tall French doors and timber-beamed ceilings. There’s a golf course on the grounds, an upscale restaurant, several room types including the signature Cameron and Jim Thompson suites for bigger groups of travellers. The Smokehouse is another popular landmark in Cameron Highlands. Harking to the British colonial times, this hotel and restaurant looks just like a traditional ancient English cottage surrounded by a garden full of flowers. There’s even a red telephone booth for good measure. Even if you don’t decide to stay in The Smokehouse, make time to have a meal here and instantly feel like you’ve been transported into old Britain. Everyone’s into vintage concepts these days, hence The Lord’s Cafe is becoming pretty popular amongst locals and tourists. Designed to look like an old-school western cafe, this place specialises in tea sets with its scones being one of the more popular choices here. Other than a selection of teas, drinks are served in old school glassware that will make your parents’ generation reminisce fondly. Unofficially dubbed the “best Indian restaurant” in Cameron Highlands, Singh Chapati Urban Restaurant is a popular restaurant in Tanah Rata that has both tourists and locals going back for more. Serving Northern Indian cuisine, the restaurant has a wide selection of both meat and vegetarian options to go with your chapati. Wash it all down with a mug of aromatic Masala tea, which will taste even better in the cool weather. 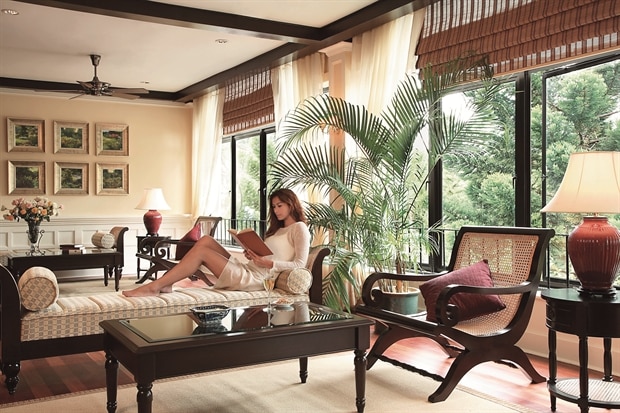 If you’re in Cameron Highlands and you want to feel slightly luxurious while sipping on tea, then head on over to the Jim Thompson Tea Room. The afternoon tea set here is a popular choice, but other dining options also prove to be of good taste and quality. Most of the fresh produce used in the dishes are grown in Cameron Highlands itself, making for a deliciously healthy meal. Finally, you can’t visit Cameron Highlands without having at least one steamboat meal. It’s almost blasphemous to not do so, as the combination of a steaming vat of hot soup, fresh vegetables, and the cool weather makes for a great meal. Try out Cameron Organic Produce Steamboat Restaurant, which is perfect for vegetarians thanks to its vegetarian soup base. But if you’re hankering for some meat, worry not – they have it too. This place draws many patrons thanks to the overall healthy selection of organic vegetables but also makes for a great place to fulfil your steamboat cravings while in cool Cameron Highlands.

Travel Guide Malaysia cameron highlands
PohNee Chin
Editor, Kuala Lumpur
Poh Nee is the editor and writes about travel and drinks. When she's not living out her holiday dreams via Google Earth and sipping on an Old Fashioned down at the local bars, you can find her snug at home bingeing on Netflix and mystery fiction.
Travel Drinks