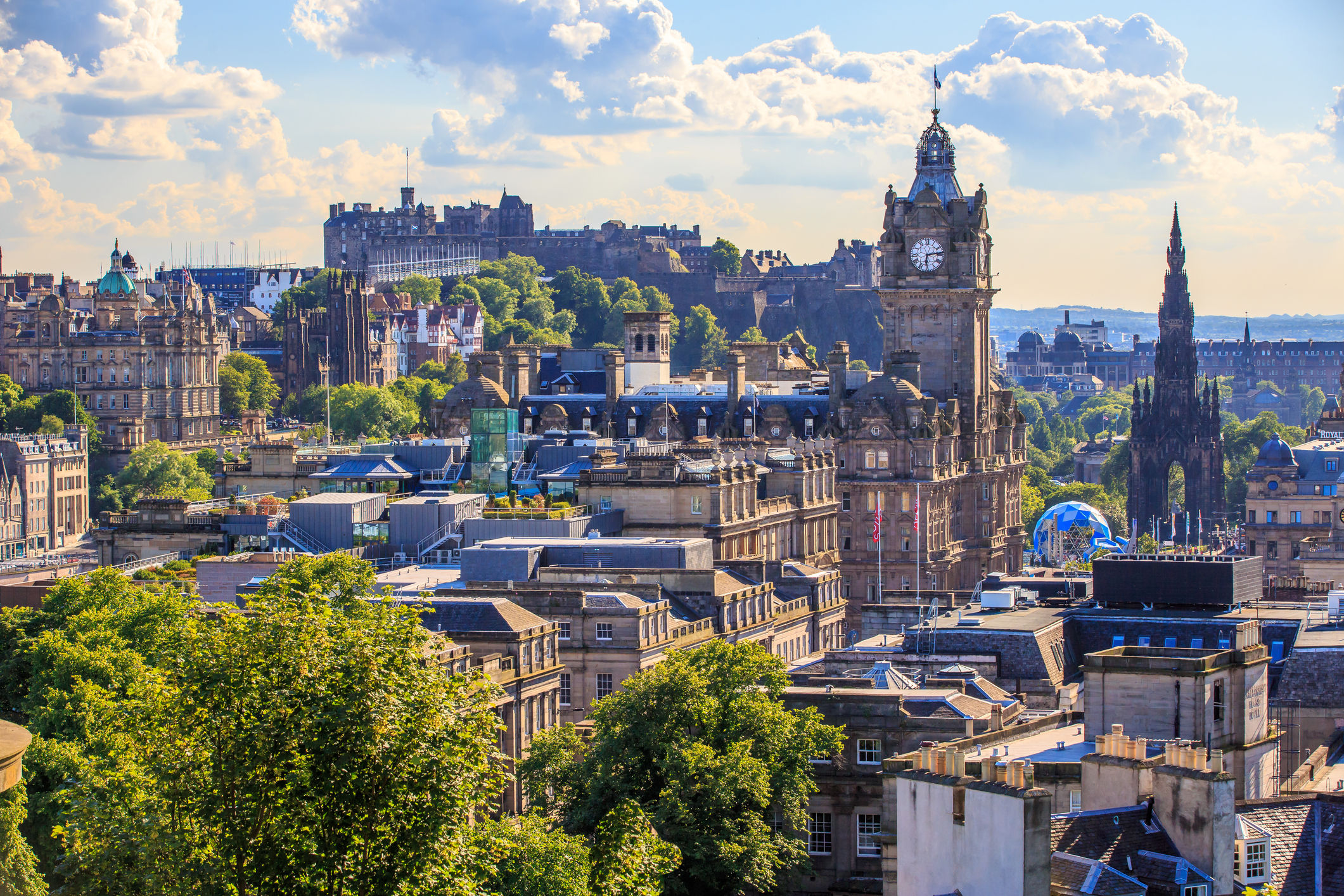 Check out: Edinburgh, the gothic fairytale capital of Scotland

Travel
Check out: Edinburgh, the gothic fairytale capital of Scotland
Share this article
Next article

The capital of Scotland is a hotbed of culture, begging to be experienced. Over centuries it has inspired and produced some of the world’s greatest artists, writers and poets. From Irvine Welsh’s Trainspotting to Ian Rankin’s novels following Inspector Rebus. Edinburgh has featured as a character, in its own right, in many great works of film and literature.

To the eyes, the city is sublime to behold. The soul-stirring medieval buildings of old town shares cobbled stone streets with an elegant Georgian new town. J. K Rowling only had to gaze out the window of her coffee shop to see Fettes College, the inspiration behind her school of magic.  Edinburgh is indeed an architectural paradise, sprawled against a dramatic canvass off craggy hills.

Scotland is very much a destination on any discerning foodies pilgrimage route. Indeed it has mothered some of the world’s most prominent chefs from veterans like Gordon Ramsay, who has a collective 16 Michelin stars under his belt, to the world’s youngest recipient, Tom Kitchin. Of course you’ll be expecting to be gorging on Aberdeen Angus beef, Scottish oysters and Atlantic salmon but it wouldn’t a trip to Scotland without sampling some of these dishes.

This savoury pudding is seen as Scotland’s national dish. Made of sheep offal, oatmeal, and suet, haggis is traditionally encased and cooked in the stomach of a sheep and served with ‘neeps and tatties’ — mashed turnips and mash potatoes.

So legendary is the haggis that poet Robert Burns dedicated a composition to it called the ‘Address to Haggis.’ It is read aloud at Burns Supper, an annual Scottish celebration of the poet’s birthday, when the Haggis is brought forward for the main course.

Many restaurants have their own rendition of this classic but head over to the Arcade Bar  for a variety of different ways haggis can be plated. If you are looking for the haute cuisine rendition of the meal then The Witchery by the Castle, probably Scotland’s most famous and luxurious restaurant, will be the one to reserve early.

Cullen skink is a thick and creamy soup made from smoked haddock, onions and potatoes. It is a common appetiser for a traditional Scottish meal and a perfect way to warm up against the biting cold of the Scottish winter. Purists will claim that a true cullen skink will only be made using ‘finnan haddie’ — a cold-smoked haddock from the northeast of the country, using green wood and peat to smoke the fish.  You will find cullen skink at most restaurants in Edinburgh but try it at the Mussel Inn or Fishers in the City and you will have an array of incredible Scottish seafood at your disposal for mains.

A trip to Edinburgh would not be complete without a visit to the chip shop. Scotland has the best fish and chips found anywhere in the British Isles. Piping hot, soaked in vinegar and ‘brown sauce’ — a traditional condiment made tomatoes, molasses, dates, apples and tamarind among others — the local chippy is quintessential to urban Scottish life. They are also unashamedly famed for their less than healthy options including the ‘cheese-n-burger’ — a cheese stuffed, thick battered, deep fried burger patty — as well as the infamous deep fried Mars Bar.  Try a proper meal the renowned Franco’s of Stockbridge for the most mouthwatering delights.

It is no secret that Edinburgh is Mecca to the bookworm. Pilgrims of medieval poets to young adult literature will make their way to the city. Here they look forward to being present among the ghosts of their literary heroes. If you are looking to start penning your next bestseller, here are some sites you should visit to give you that much needed inspiration.

Dominating the skyline of the ancient city is the Edinburgh Castle. Perched on top of an extinct volcano, this fortress is teeming with history and has been a royal residence since the 12th Century. It was the most important stronghold for Scots during their numerous wars for independence and uprisings against the English aggressors to the south.

Dedicated to the Patron Saint of the city, Saint Giles, the church has been the spiritual centre for Edinburgh since the late 14th century. An architectural splendour, what lies within is just as mesmerising with vivid stained glass, ornate angelic sculptures and the astoundingly detailed Chapel Of The Order Of The Thistle will leave your jaw dragging across the stony floor. The Greyfriars Bobby memorial is the most loved statue in the city. It is a heart-wrenching tale of Bobby, a dog who famously guarded his master’s grave for 14 years until he himself passed on. Designed by William Brodie the life-size statue back in 1873, it was originally meant as a drinking fountain for both dogs and humans. Bobby is the smallest listed building in Edinburgh and has a lovely pub next to him for you to toast to his loyalty and courage!

Arthur’s Seat is both a landmark and the perfect viewing platform for the entire city. At 350 million years old, the existence of the hill is thanks to an extinct Carboniferous age volcano system that was eroded by a glacier. Many mythical narratives surround the site, on being that it was considered a potential site for Camelot, with the mountain’s name rumoured to have been derived from legends surrounding King Arthur.

The Edinburgh Festival
Known as the Fringe Festival, the Edinburgh International Festival established in 1947 is the world’s largest celebration of the arts. Last year it spanned over 25 days and featured 53,232 performances of 3,398 shows.

It draws culture enthusiasts and celebrity performers from all corners of the earth exhibiting the best in theatre, comedy, dance, cabaret, children’s shows, musicals, opera, street performance and fine art. If you are planning to visit Edinburgh then surely this August is the best time to do so.

Edinburgh is filled with some of Europe’s most stunning architecture, including some of its renovated and refurbished five star hotels. The city is also known for some of the quaintest boutique hotels in the country. Due to the numerous tourists the city welcomes each year there is no shortage of accommodation and most of the popular hotels are only a stones throw away from the city centre, so you can perambulate your way around these ancient streets, the way it is supposed to be seen.

The Balmoral
Situated at No. 1 Princes Street, The Balmoral is a Victorian-influenced building that opened its doors as a hotel in 1902. It is a hallmark of Edinburgh’s luxury offerings and the preferred place of stay to the world’s elite. It is famous for its towering clock which is always set three minutes ahead of time to ensure the people below get to their respective trains on time. If you are a Harry Potter fan then you must book you’re stay in room 552. One fine night after her stay, J. K Rowling left a signed inscription on the marble bust of Hermes stating, “JK Rowling finished writing Harry Potter and the Deathly Hallows in this room (552) on 11th Jan 2007.” The room has since been renamed the J. K Rowling Suite.

The Caledonian
On the opposite end of Princes Street, Edinburgh’s main road, lies The Caledonian. Originally part of the train station it opened in 1903 and was bought over by the Hilton group in 2000 and given a GBP 24 million refurbishment. Now flying under the flag of the Waldorf Astoria, the Caledonian’s grand arches and red sandstone facade is a landmark in Edinburgh. The hotel also houses the exquisite Pompadour restaurant, helmed by Michelin Star chefs Chris and Jeff Galvin.

24 Royal Terrace
24 Royal Terrace is a grand Georgian house that the owner bought and re-imagined as a modern chic hotel when he ran out of space for his art collection. It is not everyday that you get to sleep over at an art gallery but that is exactly what the hotel offers. Housed at the establishment are some of the collections of contemporary art in the world.

21212
21212 gives you the chance to have a Michelin-starred meal at the restaurant run by chef Paul Kitching, before retiring straight to bed! Staying in one of the four luxurious bedrooms above the restaurant, also gives you unparalleled views of the city or the beautiful gardens in the rear. It is certainly an experience equal to sampling Kitching’s award winning dishes.

Although it is supposed to be legal tender all over the UK, the Scottish pound is rarely accepted outside of Scotland for barter or at money exchanges. Make sure you change your notes back to English pounds before leaving the country.

Fly to Edinburgh Airport from all UK airports and most European cities. Alternatively, you can get the train up from London for a breathtaking views of the English countryside and Scottish lowlands.