Check out: Hyderabad, city of pearls and palaces

Travel
Check out: Hyderabad, city of pearls and palaces
Share this article
Next article

Imagine being so wealthy that when you are in need of a paperweight all you have to do is wrap your USD66 million, 18.479 carat, ostrich egg-sized diamond in newspaper and voila! That is literally what Osman Ali Khan did. He was the richest man in the world — the latest estimations of his wealth being equivalent of USD230 billion today — and the last Nizam of Hyderabad.

The Nizam monarchs, a dynasty that formally traces its roots back to Abu Bakr, the Prophet Muhammad’s father-in-law and trusted advisor, have ruled over Hyderabad since the 17th century. Hyderabad was the most prosperous of all India’s princely domains. The city alone houses 12 palaces and is historically known as a trading centre for pearls and diamonds. Teeming with architectural wonders and rich with medieval history, today Hyderabad is also one of India’s largest metropolitan cities. Spanning over 650 km2 it has gained the reputation of becoming India’s tech capital and the Silicon Valley of the East.

Travel
Check out: Edinburgh, the gothic fairytale capital of Scotland Persian in origin, biryani was ferried over to the subcontinent by Mughal and Turkic immigrants and found a home in Hyderabad. The Nizams’ kitchens refined the dish over years and the city became known for what some consider to be the best biryani in the world. Paradise Restaurant reigns supreme as the stalwart of Hyderabad biryani.  Pictures of India’s political elite, Bollywood celebrities and cricketing legends are plastered all over its walls. The mutton and chicken biryani come in humongous sharing platters and filled will tender joints of meat. Other items include the assemblage of Kebabs and Naans, the Kheema Masala and the mythical Chicken 65.

Few places in the world can top the private dining experience at the Falaknuma’s Room 101. It holds the record for the world’s longest dining table, stretching 108 ft with 101 finely carved rosewood chairs. The hall itself is designed with the acoustics so finely tuned that if two diners were sat at opposite ends of the table, they need not raise their voice to engage in conversation. Aside from the towering antique candelabras, the glistening original Belgian chandeliers and the golden tableware, 28 Romanesque murals of animals, fruits, vegetables run along the top of the walls. Not simply for aesthetics, this was actually the Nizam’s menu.  He simply pointed towards what he felt like laying the table with that night. Each guest will be attended on by their own personal waiter who serves up 15 courses from the Falaknuma’s kitchen. Make sure you bring a large group of friends when you book the room or it may feel a little empty.

Located in its own tower at Golkonda resort, this award-winning fine dining specialty restaurant serves up authentic Mughlai and Hyderabad cuisine. Centuries-old recipes are modernised here into rich, spicy and aromatic dishes. Feast upon favourites like the Haleem, Anokhi Kheer and Barkas Patthar Gosht. Opulent interiors surround diners but at 100 ft in the air, it is the panoramic views of the forest surrounding Osman Sagar lake that makes it a truly regal experience.

Golkonda was the medieval capital of the Qutb Shahi sultanate in the 16th and 17th Centuries. Golkonda was a famous diamond market attracting merchants from all over the world. It was at Golkonda that the famous Kohinoor and Hope diamonds along with others such as The Regent Diamond, Darya-e Nur, Nur-Ul-Ain Diamond were stored. The acoustics in the Fort is something of an architectural wonder. The sound of clapping at the entrance can be heard at the ‘Bala Hissar’ which is the highest point and almost a kilometre away. The system was used for communication purposes, especially to alert royals in case of an attack.

Modelled after the Shah’s of Iran’s palace, the 200-year-old Chowmahallah was the official residence of the Nizams. This was the scene of all ceremonial functions, including the Nizams’ accessions to power, the importance evidenced by the multi-pillared Durbar Hall where the royal seat is laid, all under a shower of crystal chandeliers. Chowmahallah also houses some of the rare remaining treasures belonging to the family including the full original armoury,  some of the world’s largest and smallest handwritten Qurans (the smallest being the size of your thumb), a number of large antique iron safes that stored all the Nizams gold bars and a 1912 Rolls Royce Silver Ghost painted in canary yellow among the other collection of vintage automobiles.

Standing in the heart of the city, Charminar is a magnificent edifice of granite, lime, mortar or pulverised marble, constructed by the eminent architect Mohammed Quli Qutub Shah in 1591. Each of its pillars measure 20 meters in length while the minarets rise up to 24 meters which can be reached by a 149 step spiral staircase leading to the apex of the tower. Hyderabad is known as the ‘City of Pearls’ and surrounding the Charminar are colourful and bustling markets, where you can peruse the jewellery on offer.

On the southern bank of the Musi river is one of India’s three national museums and one of the largest in the world. The Salar Jung houses a collection of sculptures, paintings, carvings, textiles, manuscripts, ceramics, metallic artefacts, carpets, clocks, and furniture from Japan China, Burma, Nepal, India, Persia Egypt, Europe and North America.  The museum is noted for having the largest one-man collection of antiques in the world dating back to the 1st century as well as its priceless library of Qurans, some of them written in pure gold.

Ranked as the most beautiful palace hotel in the world, the Falaknuma has hosted foreign dignitaries, royalty and politicians the world over. Sprawled over 32 acres of grounds, the palace was built as a gift to the Nizam, who used to host his guests there. Extravagant furnishings surround you at every turn, including Venetian chandeliers, antique furniture, grand Italian marble staircases and a rare collection of books and manuscripts in a library with a carved walnut roof.

There is also a billiard table specially made by Burroughes and Watts of England, one of only two identical tables — the other sits in Buckingham Palace. Falaknuma literally translates to ‘the mirror of the skies’ and the view of the city from the palace, when lit up in the evenings, gives you a sensation of looking down on a shimmering starry night sky. The palace and its world-class service are both truly the closest you will feel to experiencing the lifestyle of the Nizam. 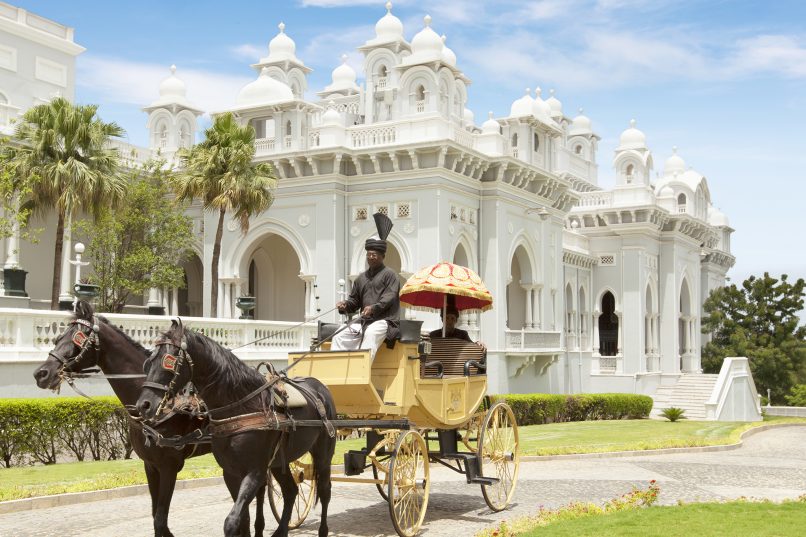 The Vivanta by Taj is ideally located in Hyderabad’s buzzing Begumpet district and just a short walk away from many of the city’s tourist attractions, shopping destinations and theatres. Complete with four restaurants serving international far and a spa to relax from your adventurous day out, this elegant hotel is suited to both leisure and business travellers alike and is conveniently only 30 mins drive to the airport.

If you’re travelling all over India, it is still best not to drink water from the tap. This will help you to avoid a case of the famous Dehli belly!